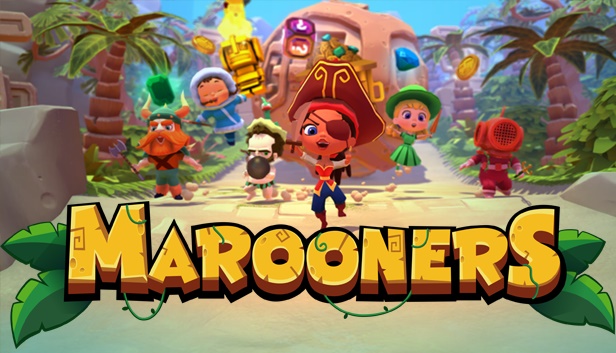 We’ve always been a fans of party games, from Rayman Legends, to Overcooked. This time, we’re playing Marooners, a fun pick-up and play release. How does it compare to the others? Find it out in our Marooners review!


Take on your friends in a mix of fun and frantic minigames! Marooners keeps you on the edge of your seat as you overcome challenges requiring both skill and some luck while sadistically laughing at the misfortune of your friends. Choose your favorite Marooner to run, jump and bash your way to glory in this crazy party game!

This is a double review for Marooners. The game was played by StefMart and Ceidz. This review presents what they both had to say.

One of the things that impressed me in this release is how fast you can pick it up and play: as soon as the game is booted, you’ll be up in an arena with friends or bots in a matter of seconds ready to go!

The first run I did was one of the most confusing ones in recent memory. You are greeted by a mini-game that will last from 15 to 45 seconds, then you’ll go to the next. The objective is written in a one-liner once the game start, but you’ll inevitably be really confused for the first ten minutes of gameplay or so. As soon as the initial confusion is over, the next runs were either charming or hectic (depending on the selected game mode).

Speaking of the games mode, there are two different main modes: Party or Arena. In Party, your objective depends on the mini-games, but usually, its either collect more coins than other players, or be the last man standing. In Arena, each mini-game is a brawler in which you must be the last man alive. There is also a modifier available on each game mode: Linear will play each mini-game until it’s done, but the hidden feature and fun generator of this game was by far the Chaos modifier, in which the mini-game randomly changes to the next one after a few seconds. You then have a new mini-game for a few seconds until all of them are completed. This was the most amazing mode playing with friends since we had to keep track of where we were on each game. 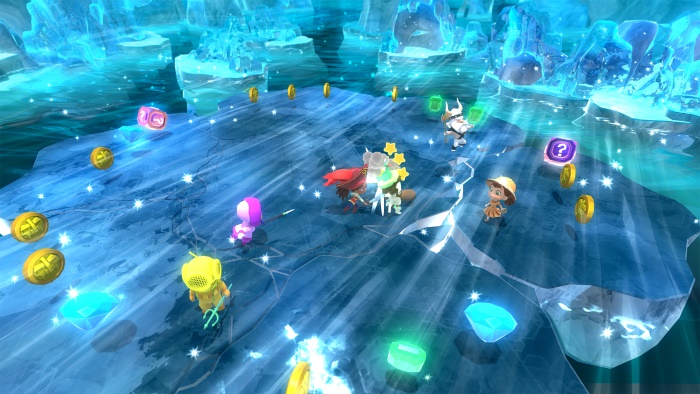 Now onto the issues while playing. The first thing that relatively annoyed me was the inability to pause the game (even when going to the main PS dashboard the game would continue to run in the background). I understand this was done to prevent online trolls, but I would have liked to have it available at least in local co-op. The mini-games are creative, but by the time the initial confusion is over, you’ll already end up seeing the same mini-games over and over again. You’ll eventually feel like you’ve found everything there’s to see in a single play session!

Also, every time a match ended, it felt like it happened to soon (one full match of 6 mini-games can last as little as a single minute!). I’d have liked to have more customizable options, to be able to select the mini-games I want to play (thus excluding the less good ones) or the duration of a match. I also noticed a bug where I wasn’t able to change the game mode while I was hosting an online match. Having to tell your friends over the party to leave the lobby, so I could change the game mode, then invite them manually back again was tedious and completely unnecessary.

I hadn’t played a good party game since the legendary Mario Party releases back on the GameCube, and since I’m a die-hard fan of the genre, I was really happy to get a chance to try Marooners on my favorite console.

As soon as the game begins, you can see that it is very kid-friendly. Colors are lively, and the main characters are charming little things. We are offered a choice of different characters (princess, pirates, Vikings, cavemen, etc.), and choice of weapons, etc. As for the gameplay modes, there was nothing very elaborate as, like Ceidz mentioned, only three modes are available. The different modes also felt similar as we got to play more and more, and I was disappointed that there were only a few different mini-games, so I felt it was missing that little something extra that would elevate it – what it ended up doing is give me the urge to plug-in my GameCube to play Mario Party. 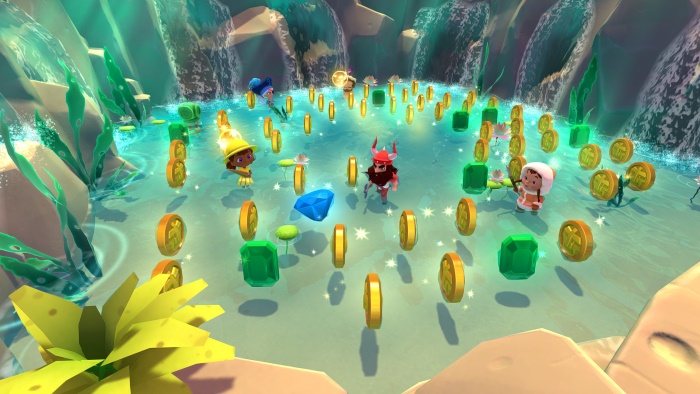 Each game can be played really quickly as we are transported onto what looks like a treasure map. Each mini-game lasts a few seconds, and a full game has only six mini-games at most. The goal of each game is to collect as many gold coins as possible and not necessarily to finish first. I would definitively have liked to have more instructions presented to us at the beginning of each mini-game as they were really confusing to play with no reference. One of the examples I can think of is in one of the mini-games your goal is to keep a cup to collect coins. Being touched by another player will make it so that he/she takes the cup so to collect coins. But after a few moments, the cup will be burning, and then it’ll explode. I needed to play this mini-game at least 2-3 times before I understood that the objective was at first to keep the cup, then give it to someone else. 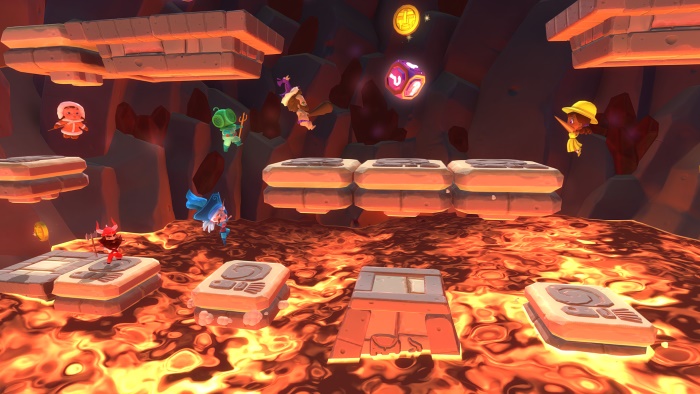 After an online play session with my friends, I tried the local offline mode against bots, and boy, it wasn’t fun at all! I’m still glad they offered this mode to try the different levels, but in a fashion similar as Overcooked, this is a game meant to not be played alone.

Overall, the game didn’t disappoint me even though there aren’t many mini-games to play and they are very repetitive. The game is at its best when played with other players, and I even had a blast with my 7-year-old boy, so this game is definitively kid-friendly!


Final Thoughts
Honestly, this game is a blast when played with friends. The first ten minutes or so are confusing as nobody knows the mini-game objectives, but then it gets better. There aren’t many different mini-games either so unless you want to play with different friends for each run, you’ll likely feel like you’ve seen all that this game has to offer in a single one to two hours session.

We would have loved to have more options so that we could select the mini-games that are more fun and focus on those. We also think that the game could definitely benefit from some DLC so that more mini-games are available and thrown into the mix. The Chaos game modifier was a great feature, and we always used it to have more fun with this release.

Disclaimer
This Marooners review is based on a PS4 copy provided by Game Drive.

Great at first, but lacks variety of mini-games 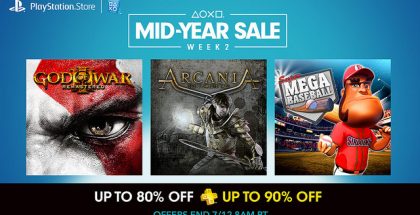