One weapon can save your village. Can you team up with fellow Ruinhunters to search for it? The answer is well, yes, of course, you can. Learn more about this gem in our Aegis Defenders review!


HUMANITY HAS BEEN BROUGHT BACK INTO THE DARK AGES, BUT REMNANTS OF A ONCE HIGHLY ADVANCED CIVILIZATION STILL EXIST.

In a world where control over ancient technologies means power, a ruthless Empire has arisen. You play as a team of Ruinhunters searching for the one thing that can save their village – a legendary weapon known as Aegis.

Aegis Defenders has finally released. It started its run as a Kickstarter campaign over three years ago, hitting a high enough goal that allowed the team to complete the game, and now it has made its way to consoles with the help of Humble Bundle as its publisher.

Aegis Defenders is an action platformer/tower defense mix. Usually, you will play through the level navigating through the area by dispatching enemies and finding relics hidden throughout the levels. Once you reach the end of the level, you enter a spot where you have to defend against waves of incoming monsters. That is the gist of the game, and it’s an awesome formula that makes this one a very fun release on PlayStation 4. 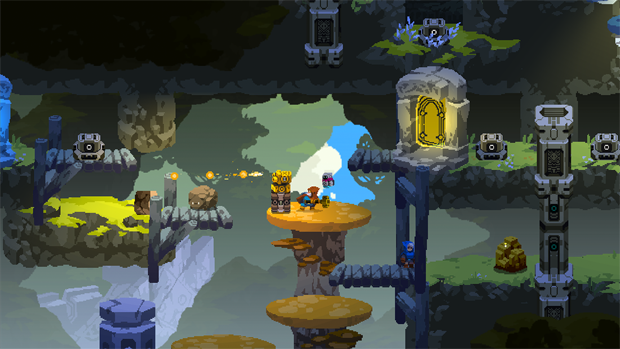 It starts you off with Clu a hunter and Bart, an engineer, as they explore looking for relics hidden in the world. The two work as a team and you need to treat them as such. You can switch characters on the fly as needed to maneuver past certain obstacles, which you’ll be doing quite often. Clu will be able to set up traps and shoot arrows, while Bart can create blocks and set up turrets. As you play the game, you will get access to two more characters that fit perfectly in this universe. Each character has a specific color assignment as well that will require that you exploit enemy weaknesses based on colors.

Let’s start off with the action platforming part of the game. In the early part of a level, you will explore and search for hidden relics. Sometimes to reach them you need to get creative with your party members and their skills. While exploring you need to farm resources, and then you can build things, such as blocks to stand on or bombs to reach lower levels. Exploring each level and swapping characters is very fun and definitely a high point of the game. 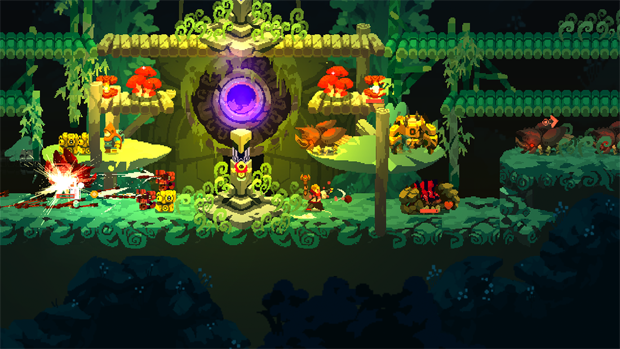 After that part of a level is over, you will need to get through a different type of experience: a tower defense battle. You will have to fight several waves of enemies, and the game gives you a minute to run around and collect resources to set up your defenses. You get a minute between each wave as well, and if you don’t need it, you can start the next wave early and get a bonus. What makes the upcoming battle interesting ties into what we talked about earlier regarding colors being a weakness of enemies.

The game will give you an idea of the majority of the upcoming enemy color at the entry point, so you will need to setup the traps or weapons that make the most sense. When the wave is complete, you then get another 60 seconds, get more resources, create more traps and weapons, and repair where needed, but you need to be careful since the colors can change, so you might need to redesign your trap setup or fuse them with others to get the advantage over your enemies. It’s a really great system, and my only complaint is just that switching between characters and getting them to where you need them can take time.


Between levels, you have a hub area where you can converse with your team, as well as purchase upgrades that will allow you to customize your characters’ abilities and weapons, while also unlocking fusion weapons. It’s a nice break from the constant battles and exploration, which is appreciated.

The game also has two player couch co-op which can be really fun and actually makes the tower defense portions much easier as you can work with someone helping to set up your weapon and item layouts. A buddy of mine and I had a good time playing together for a while and now he’s a fan of this release. 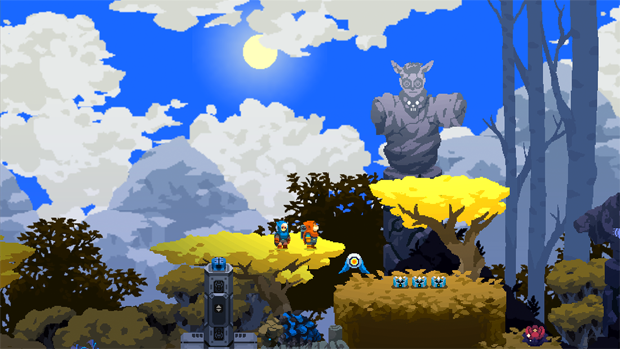 The art in the game is gorgeous, with it having a really unique look even among the current batch pixel art games. The world is lush and diverse with great looking enemy types. I loved the color palette the game uses as well, avoiding the typical browns and darker colors from most post-apocalyptic games – it really made the game a delight to play. The soundtrack is awesome and comes from Power Up Audio, a who’s who of indie game soundtracks – they have worked on Towerfall, Super Meatboy, Darkest Dungeon, and recent releases such as Celeste.

I had a lot of fun with Aegis Defenders. I really liked the action platforming elements of the game, but what surprised me the most were tower defense sections. Setting up my defenses and planning for an attack is very fun, creating a unique and cohesive experience I wasn’t expecting. Play this game on PS4 right now since it has a lot of fun to offer.

Disclaimer
This Aegis Defenders review is based on PS4 copies provided by Humble Bundle.