Bloody Zombies from nDreams is an homage to the good old-fashioned beat ’em up of ages past, now on Nintendo Switch. Find out more about this one in our Bloody Zombies review!


Bloody Zombie takes place in London where a zombie outbreak has been contained before things REALLY got out of hand. A group of four survivors is tasked with using some fancy watch tech things to track down five keycards needed to save the day before it is too late… or something like that. The premise is good enough to setup what will be a short but fun beat ‘em up in which you’ll take out zombie wave after zombie wave until you reach the big bad boss at the end, to repeat it a few times before you reach the end. 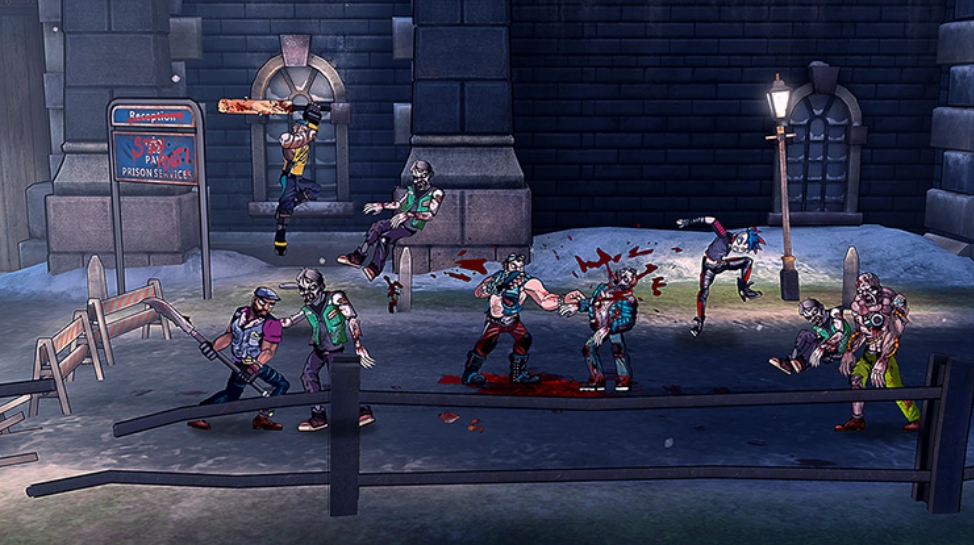 You, of course, need to stay alive, so you’ll get a short tutorial at the start of the game to teach you the basics. Along with your weak and strong attacks and being able to jump, you can also run by double tapping the same direction on the D-Pad or the left analog stick. There is also a slide to do some damage while you quickly move from one spot to another, as well as a roll to dodge incoming attacks. You can also do combos by combining your weak and strong attacks, which will, in turn, allow you to achieve long multi-hit combos that will be counted by a big number on the screen. 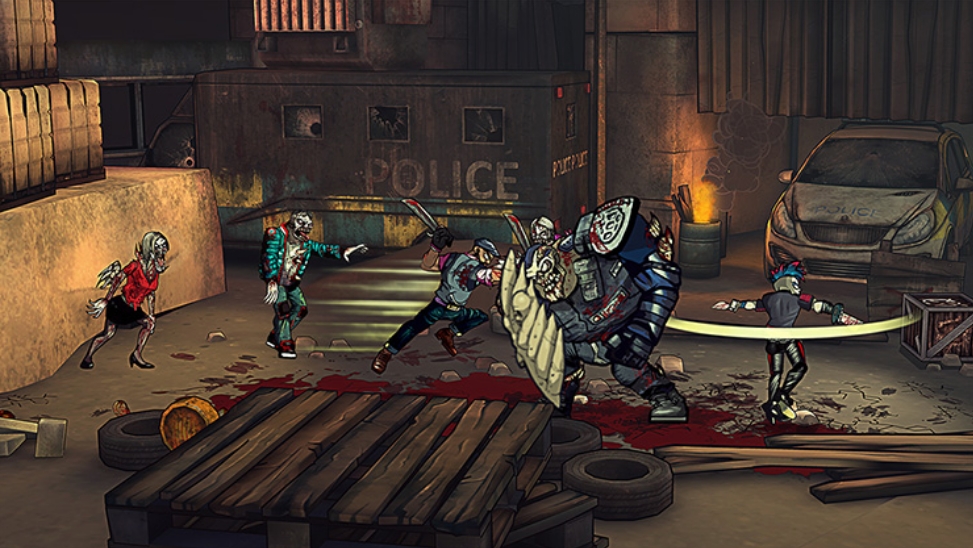 The fun part is that you can find several skills as you play, skills which you can equip to your character to use your energy gauge by, for example, doing a left, right and attack button motion thing to use a paddle that will add elemental damage to your combo and deal considerable damage to zombies. Skills are color coded with red, green and blue colors, and you can only equip one skill from each color at a time, so once you’ve played the game for long enough, you’ll have several skills from which to choose from. 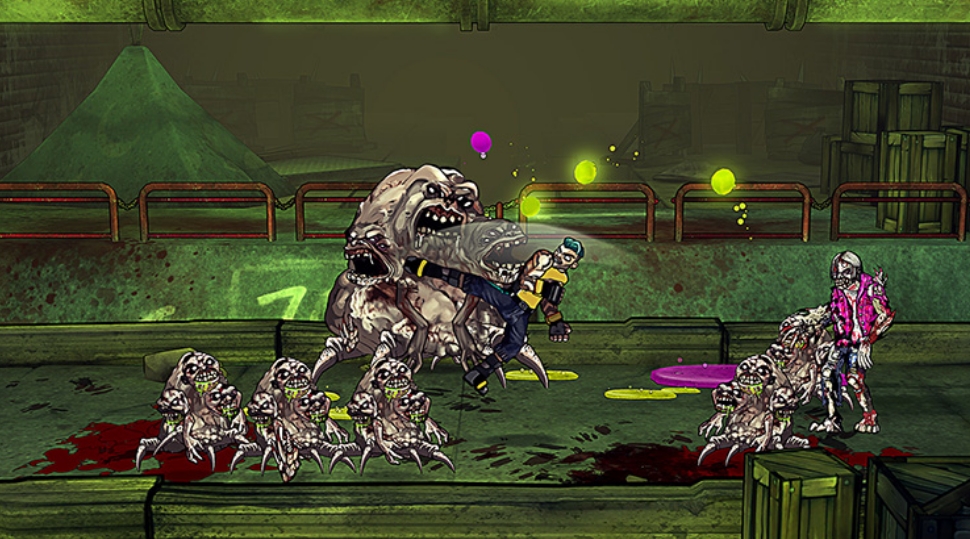 There are several items in each stage you can destroy, and doing so can be good for you because it will allow you to keep your combo going (which is great since some of your skills activate when you reach a particular combo threshold), and once destroyed they might unveil a weapon you can grab with the A button and use against the zombies, or it might reveal a pick-up to recover your health or to recover your energy gauge so you can use some more skills against the horde. 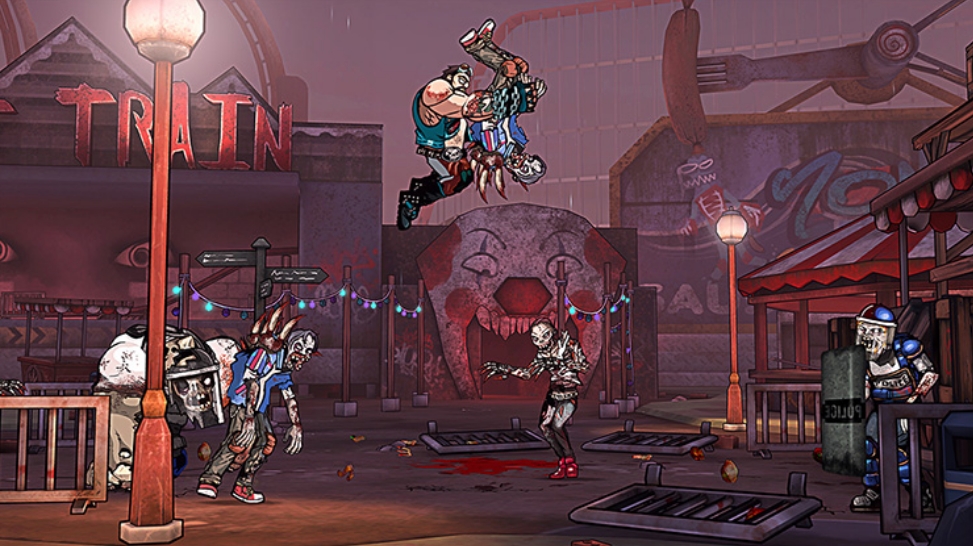 The regular zombies in the game won’t be much trouble, but once new types of zombies start to pop-up more often (around the end of the first stage), you’ll realize you can’t just button mash your way to victory. The regular zombies move slowly and have weak attacks, but other types of zombies will be able to attack you from a longer range, dodge some of your attacks, counter attack you with deadly spikes if you decide to jump over them, rush at you with very sharp knives and more! 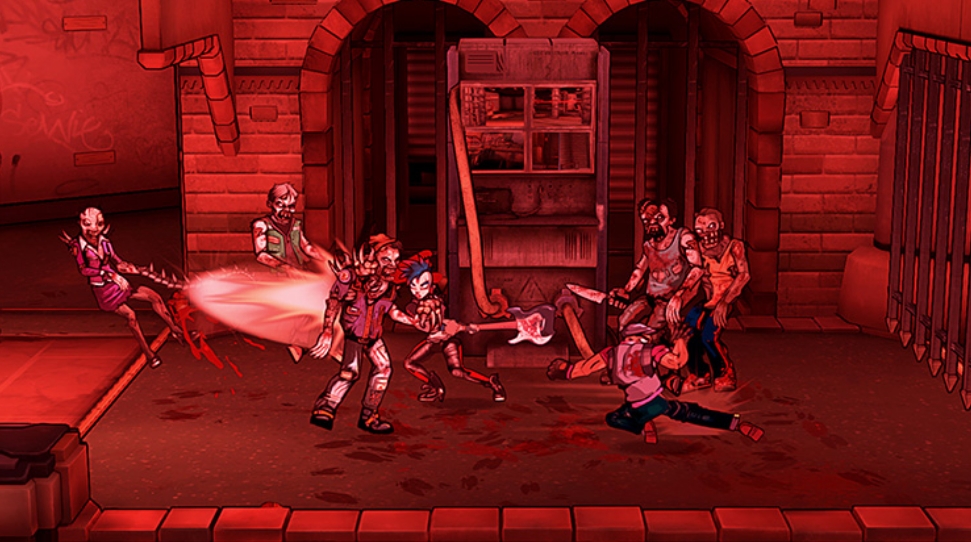 And if you feel a bit overwhelmed when there is more than one zombie type out to get you, wait until you reach the game’s bosses! They’re large chunks of rotting flesh that have a considerable attack range and can deal massive damage to you if you’re not careful, so be sure to take a moment to understand their movement and attack patterns before you try to rush in for the kill. 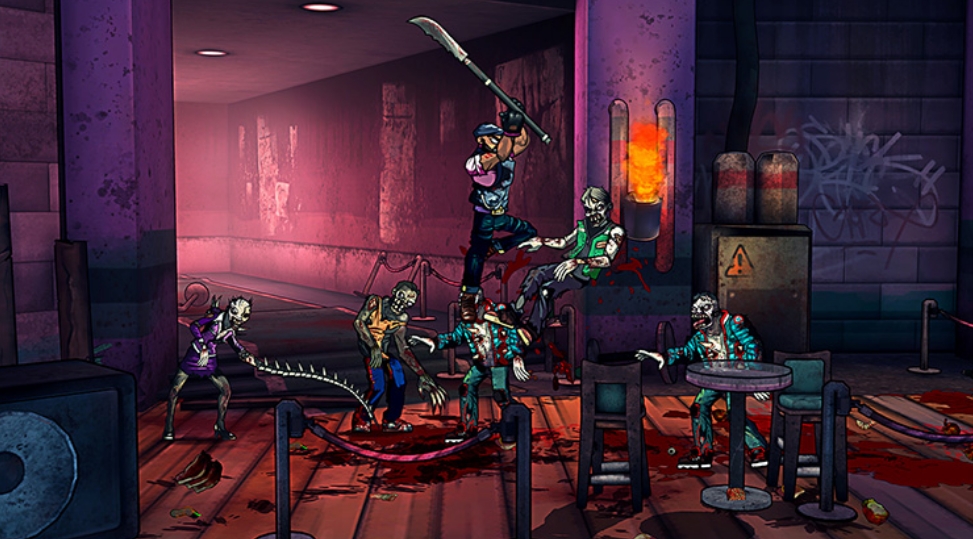 The game can be enjoyed on your own, or you can dive into a multiplayer run either at home or online, and I do have to say that taking on the game in the multiplayer mode, while a bit chaotic, is definitely more fun than going at it solo. Not that the game isn’t fun when you try to save the city by yourself, but having some friends over locally or jumping into an online session greatly increases the replay value for this one.

Bloody Zombies is a fun beat ‘em up that pays homage to the classics while also doing its own thing. Being able to find new skills as you play and equipping them to find the right combination for each scenario is definitely fun, and being able to enjoy the game in single or multiplayer sessions is definitely appreciated. If you’re looking for an enjoyable beat ‘em up on Switch, then be sure to give this one a try!

Disclaimer
This Bloody Zombies review is based on a Nintendo Switch copy provided by nDreams.