Set in the Onechanbara universe and taking place at the prestigious “Kirisaku High School” (known for its balanced curriculum of sports and academics), this is a story of survival: five students cut off from the outside world and surrounded by a seemingly endless flood of ravening zombie hordes.
Find the source of the undead infestation, annihilate them with overpowering weaponry and fashionable undergarments, and put an end to this crisis.

School Girl/Zombie Hunter is a game set in the Onechanbara universe, and it is very much what it sounds like: you are a school girl, and you need to hunt zombies that are invading the school you are stuck in – it’s pretty self-explanatory! It’s a third person over the shoulder shooter with some melee when needed.

You start off as one of the girls, and you quickly find the other girls and get them to aid you so that you can have a team to go up against the zombie horde. Each of the girls has different specialties: when it comes to guns Sayuri is skilled with a handgun, Risa is good with the assault rifle, Enami is great with the sniper rifle, Rei loves shotguns, and Mayaya does wonders with sub-machine guns. I do have to ask though… what is the school teaching these girls for them to become so adept at firearms? 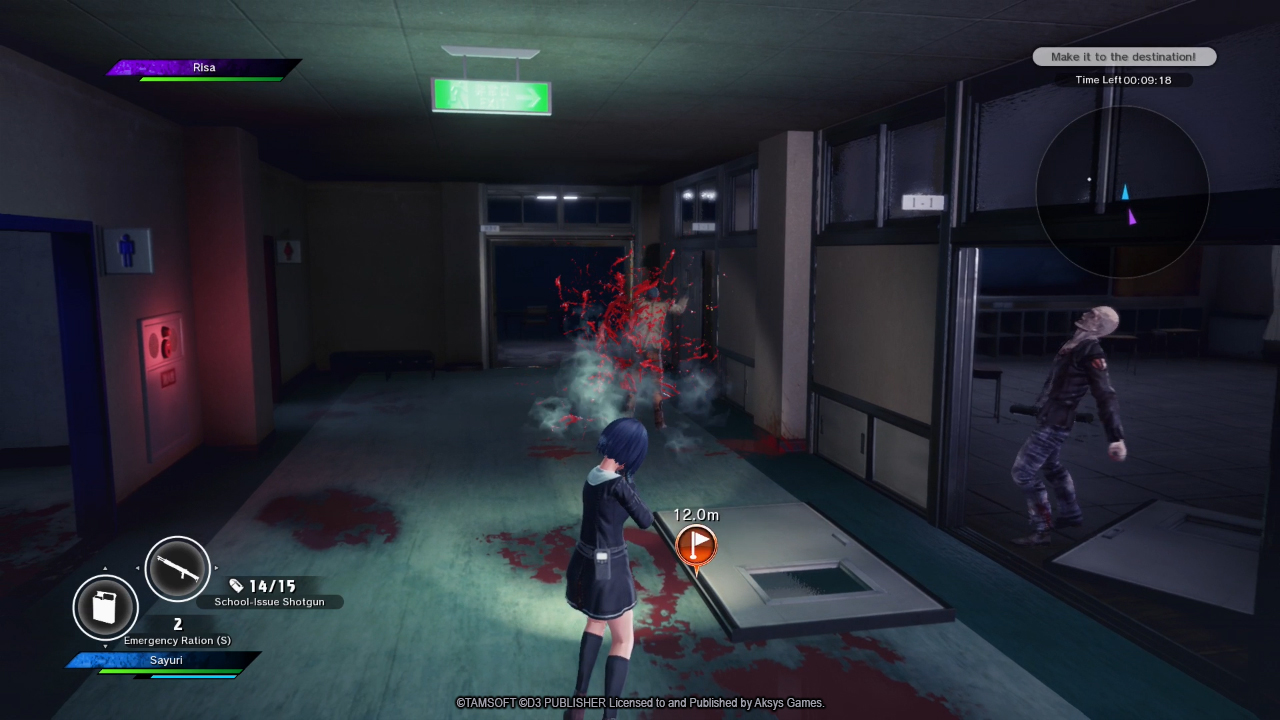 The game puts into levels with different chapters that you can replay again and again to get a better score. Each section will touch a bit on the story then have a mission for the girls to complete in school as they try not to get eaten by the zombies. The gunplay itself is fine, but it seems a bit slower paced when compared to other shooters I’ve played. I did not, however, enjoy navigating the school. The game will often give you a marker for the final spot to reach in a mission, and finding how to get there can be confusing.

The game also seems to suffer from Monster in the Closet syndrome. You see, zombies just aren’t walking around the school, no sir. Zombies will randomly raise from the floor or appear out of thin air, constantly putting you in danger. They will continue to appear and appear as you progress through the level, making it almost impossible to set up a proper plan other than “kill everything that moves.” The one piece of advice I can give you is that if you want to survive you better aim at their heads. 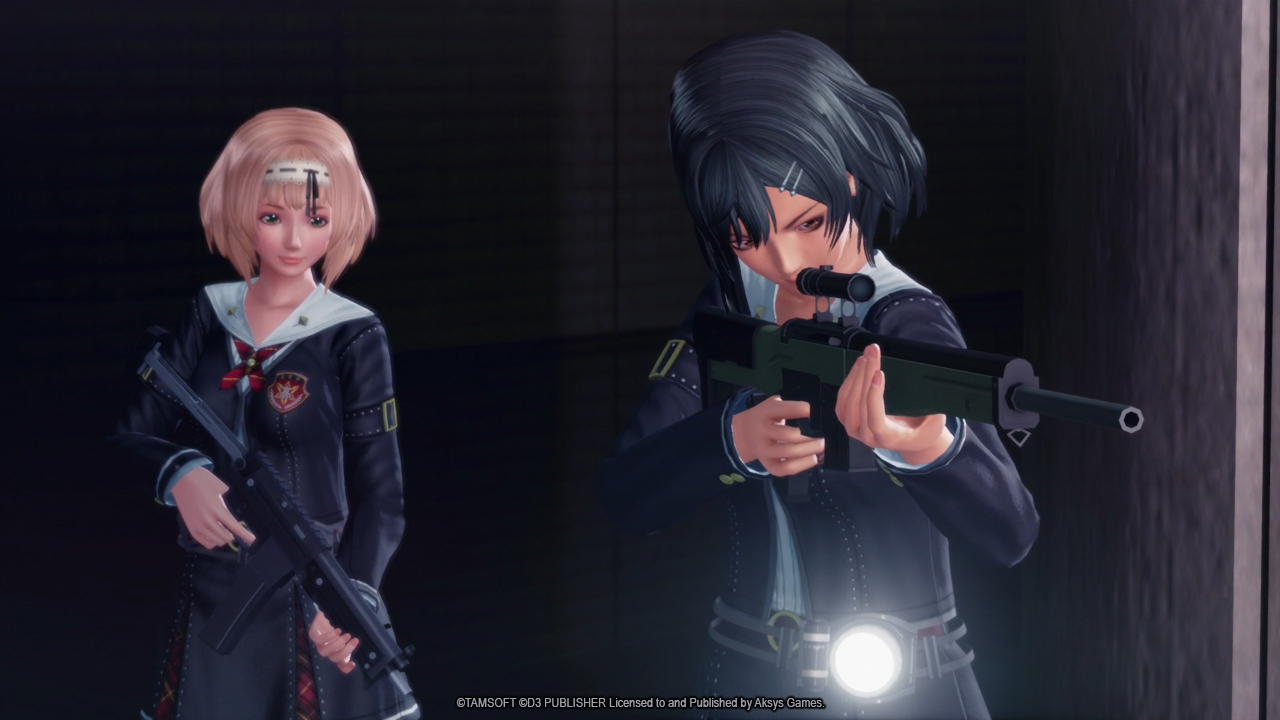 Now I did say this was in the Onechanbara universe, but what does that mean for this title? Well first off when you take damage the girls’ clothes will start to get damaged and eventually fall off, letting you see their skimpy undergarments. You also have the option of ditching all of your clothing and go right to your skivvies, causing a distraction for the zombies and helping your team out, but for the rest of the level, you will be in your underwear. It is what it is, and you are either really going to like this or hate the game for doing it.

The game has a Platinum trophy with 41 trophies in total. Most are easy to get, but the one for completing the game with an SSS rank on all difficulty settings will definitely be a hurdle to overcome on your path to the Platinum trophy. And then there’s a grindy one for getting 10,000 kills, so you will be playing the game for a while if you try to get the Platinum. 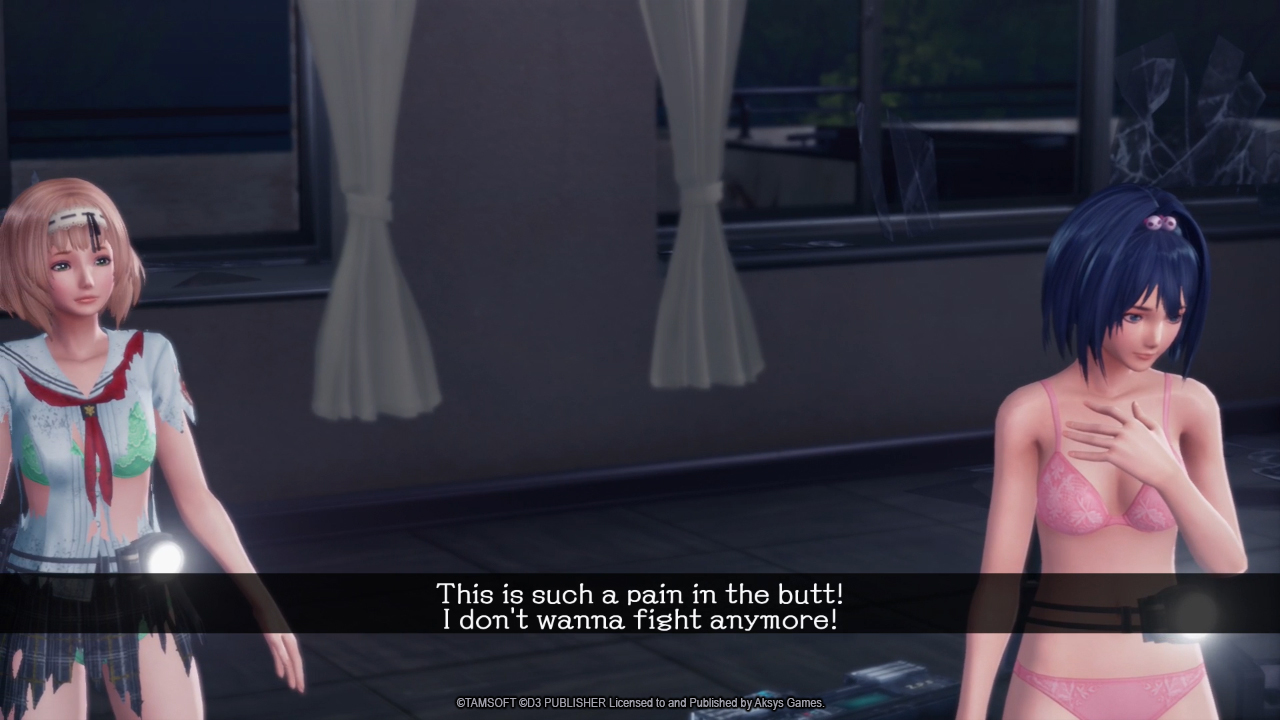 School Girl/Zombie Hunter is an interesting game, but it’s not for everyone. The story is fun, and the gameplay features decent but uninspired gunplay and an odd level structure. If you get offended by games in which girls are constantly reduced to their underwear, then this one certainly isn’t for you. But if you’re a fan of the Onechanbara series then you should definitely try this one. 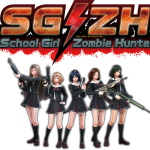 Disclaimer
This School Girl/Zombie Hunter review is based on PS4 copies provided by Aksys Games.