After a calamity befalls Tokyo, some of the city’s survivors find themselves with powerful abilities bestowed on them by colorful tattoos. The city is cordoned off from the world, its inhabitants isolated. To create peace, the city has been divided into 23 Wards, each controlled by a powerful group known as Clans. Together, these Clans form the Syndicate. It’s rumored that escape from the devastated city is possible, but only for the person who manages to defeat all 23 Clans…

This is a double review for Tokyo Tattoo Girls. The game was played by EdEN and Ceidz. This review presents what they both had to say.

After Tokyo’s population has been greatly reduced, it became forbidden to leave the city, and the city itself has been divided into 23 wards. As the player, your role will be to conquer each of the 23 wards to finally escape the city.

The gameplay of this release is far closer to an auto clicker than a real game, and this was my first deception. Most of the gameplay revolves around conquering the wards, but in effect, the game is automatic and invading a ward doesn’t require direct action from the player. Every once in a while when a district has been invaded, the district boss will automatically fight you, and you’ll automatically win. Yep, even the combat is abstracted. The only factor that can make you loose is that sometimes a district will start a fight. Preventing this fight (or losing it), will make you loose Honor, and this Honor statistic is limited. If you run out, its game over and you’ll have to restart from the beginning. 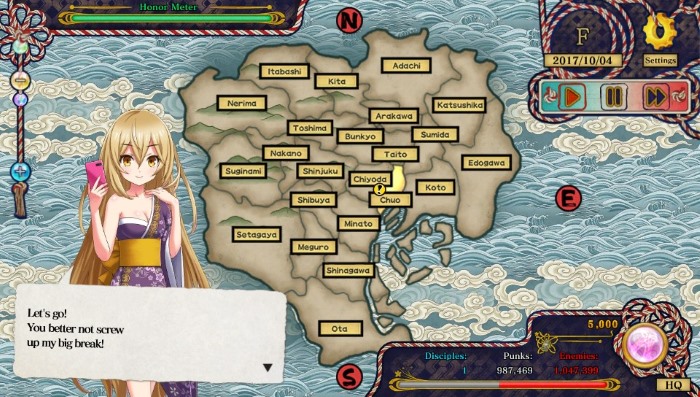 As far as the presentation of the game goes, I wasn’t impressed at all by the few visuals the game has to offer. There are a few different static background with the characters over, and you’ll be seeing the districts image for most of the game, since everything happens there. The loading times are also epic, and lasts around 6 seconds to show this static content.

The English translation was also lacking and felt weird. For instance, a few characters refer to themselves with their names (3rd person), instead of using the “I.” For example, at some point, the character Karin says “Karin can’t fight against the 23 wards with this“), which isn’t proper English. The soundtrack wasn’t memorable, and this game is completely voiced in Japanese (which isn’t a surprise), but then again the voice-overs had different levels of quality depending on whom we were talking to.

As Ceidz said, the game does share some elements with auto clicker releases since, in theory, the game almost plays itself. You do have to click here and there to collect extra resources or to activate skills to keep each area under control before things escalate into a turf war, but you’ll spend most of your time with the game staring at the screen as info is displayed about what is going on.

The main gameplay mechanic in the game, and the one that gives this one its name, is upgrading the girl you select by way of tattoos. You can’t just tattoo the girl you’re playing with whenever you want since it’s going to cost you PM, which is also used for activating skills and actions in the main map screen. Once you’ve done a tattoo, it will provide a stat boost, and you can then upgrade the tattoo to boost said effect. If you manage to add all tattoos on a girl’s back, then you’ll gain access to a big tattoo that will mark a nice milestone during your run. 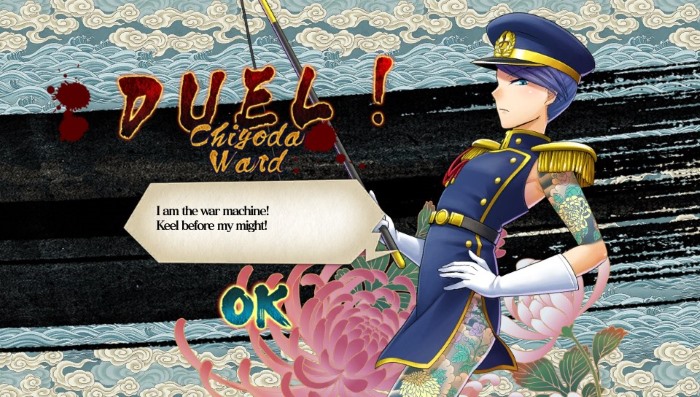 Why are the stat boosts important? Because each tattoo will boost your charisma or your threat stats, which will, in turn, affect how you recruit new members to your cause. Charisma will make it easier to recruit scholar to your cause, while threat makes it easier to gain the trust of punks for your revolution, so you’ll need to juggle both to keep a good balance that will allow you to conquer new areas without having both groups in conflict.

Something weird about the game is that the loading times are considerably long at times, which made me think the game was about to load a cutscene with lots of voice acting or it was going to bring up a tutorial for a new gameplay mechanic or something considerable. It turns out that most of the time the game was only loading up a static image or two! Why the need for such long loading times I will never know, but it is something you should know about for your convenience. 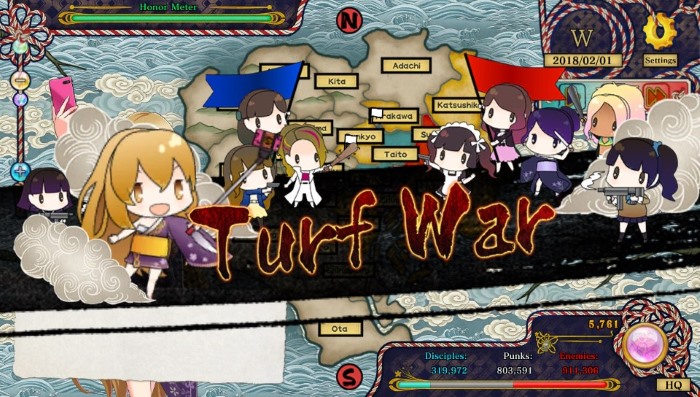 Final Thoughts
Tokyo Tattoo Girls is a love it or hate it type of release. It’s a short one at an hour or two at most before you can see one of its endings, and we weren’t impressed by the gameplay, the graphics or the lacking story – not to mention the incomprehensibly long loading times that pretty much always lead to nothing more than showing us a static image. We definitively recommend you to stay away from this release, unless it is heavily discounted and you HAVE to get some auto clicker semi-strategy game action on the go.

Disclaimer
This Tokyo Tattoo Girls review is based on PS4 copies provided by NIS America.