| is a fun shoot ‘em up from Handy Games on Nintendo Switch. Learn more about in our Aces of Luftwaffe – Squadron review!


Before you can dive into your adventure you will first need to select the difficulty level. The two unlocked options are Normal and Hard. For Normal, things remain very much within the normality spectrum. Hard increases the overall challenge, but if you’re a shoot ‘em up expert you won’t have trouble completing the game. And then there is Extreme which is such an extreme difficulty that you first need to unlock it as a valid option by completing the game in Normal or Hard.

With the game being a fast-paced shoot ‘em up, controls are kept simple and to the point. You move your plane, and wingmen, with the left analog stick or the D-Pad and shoot with the A button. You can use your active skill with the X button and can switch between skills with the L and R buttons. You can also cloud dash with the B button in case you want to quickly get out if danger.

As you play you can collect supply crates to gain power-ups for your plane which include a bump to your firepower, adding a turret that will autofire, or help to revive a fallen wingman. Weapons include a quick shooting gatling gun, a flame shot, electric bullets or a laserbeam which you can use until you run out of ammo – and weapons can be powered up by supply crates which will also refill your ammo. As for turrets, they include homing missiles, a split shot burst, a sonic wave or a laser shock burst – turrets also run on ammo so be sure to keep them stocked!

As for wingmen, they will be there to aid you in each mission… as long as they stay alive! They are Mark Taylor, the marksman, Melissa Monroe, the brain, John King, A.K.A. Knockout-Johnny, and Steve Davis, A.K.A. Silly Steve. Each one has special abilities that can help you when you’re in trouble, but you also need to take into consideration their hindrances! You see, each wingman suffers from negative effects that could trigger at the worse of times, so be ready!

If you take on the game on your own, your wingmen will fly around you in a specific formation, but if you take on the game with friends, then each player will be able to control one aircraft. The game’s difficulty does ramp up a bit if more than one player is, well, playing the game, but you can also cover more of the game’s screen this way by attacking at enemies coming in from different sections – not to mention that you’ll also be able to get a bigger overall score if you all work together.

Your squadron can level up with the medals you collect during missions, so be sure to grab as many as you can! There are regular medals which count as one medal each, but there are also larger medals which are more valuable since they count for five medals. The skill coins you get from leveling up can then be spent on learning new skills for each wingman, skills such as Weapon Specialist, Shock Grenade, Repair Aura and Parable Maneuver, to name a few.

And then there are the side missions you can take on which will give you extra rewards if completed. They’re not needed to complete a level, but they definitely add some extra fun. Side missions have objectives such as chase, search, defense, survival, refuel, rescue, stealth, and more.

The game features big and nasty bosses, the titular Aces of Luftwaffe, that you need to defeat by paying attention to their movement and attack patterns so that you can maximize your damage output and make the most of the lives you have available since most bosses are able to defeat you in a single hit with some of their attacks. For example, you’ll end up running against a flying train that can leave behind a trail of fire, and while its movement during the first half of the battle will be done in a straight line from one of the screen’s sides, during the second half it will move in a curved manner and will be able to destroy you if it touches you – while also dealing considerable damage from its fire trail.

This one features an in-game achievement system which marks the milestones you reach. Achievements include, for example, losing all of your lives, shooting down 10,000 enemies, using your active skill to defeat 700 enemy aircrafts, surviving a level without losing any members of your squadron, finding a hidden skill coin, collecting five aircraft blueprints, upgrading all skills of the squadron and more.

I highly recommend that you get Aces of Luftwaffe Squadron on Nintendo Switch as its a fun shoot ’em up with an interesting power-up system and lots of content to enjoy. The one complaint I’d have for the game is the small slowdown experienced during more action-packed sequences, but it’s not a deal-breaker since it doesn’t happen everywhere – the developer will probably patch this soon. 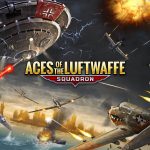 Disclaimer
This Aces of Luftwaffe – Squadron review is based on a Nintendo Switch copy provided by Handy Games.