Lumber needs to be moved around the yard and, unfortunately for you, there is some pretty terrible terrain. Learn more in our Spintires: MudRunner review!


Spintires: MudRunner is the ultimate version of the million-seller hit Spintires for the first time on consoles. The game puts you in the driver seat of incredible all-terrain vehicles, venturing across extreme landscapes with only a map and compass as guides!

A huge upgrade over its predecessor, this edition comes complete with a brand new Sandbox Map joining the game’s original 5, a total graphical overhaul, a new Challenge mode with 9 new dedicated maps, 13 new vehicles and other comprehensive improvements.

Drive 19 powerful all-terrain vehicles with their own characteristics and equipment. Complete your objectives by enduring perilous conditions across wild landscapes in extreme conditions with dynamic day-night cycles. Overcome muddy terrain, raging rivers and other obstacles that realistically react to your vehicle powered by the game’s physics engine.

With your map, compass, and your driving skills as allies, go solo or join up to three others in co-op multiplayer.

Spintires: MudRunner is a new log hauling sim. At first when I heard I was going to review it I thought it was going to be more of an all-terrain racing game similar to the dirt series with more mud and bigger vehicles. Then I saw the trailer, and I wasn’t sure anymore. Now that I have played the title I can confirm that this game does not resemble a racing game in any fashion, but that’s not a bad thing! 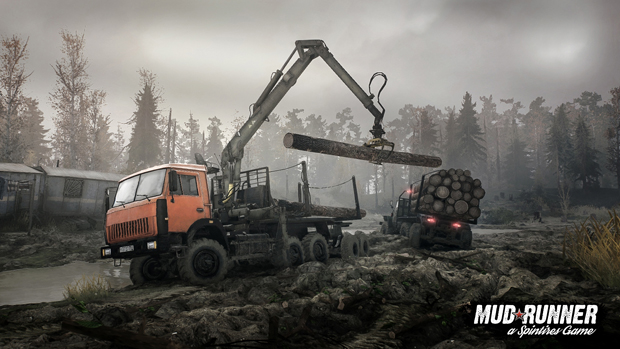 The game is actually a slow and methodical simulator in which you need to move something from one part of the map to another part. Simple, right? Each of these maps is large and hard to maneuver due to the varied land conditions that need to be traversed. The area is covered in mud, so you will need to be slow and methodical to make sure that you can deliver the gods in one piece.

The game gets you started with a tutorial on how to play, but overall it doesn’t feel like it prepares you well enough for this one. The realistic physics of the game really make it so that Spintires: MudRunner has a tough learning curve. That being said, I actually found that the challenge mode, which features some smaller maps, helped fill in some of the gaps left by the initial tutorials. 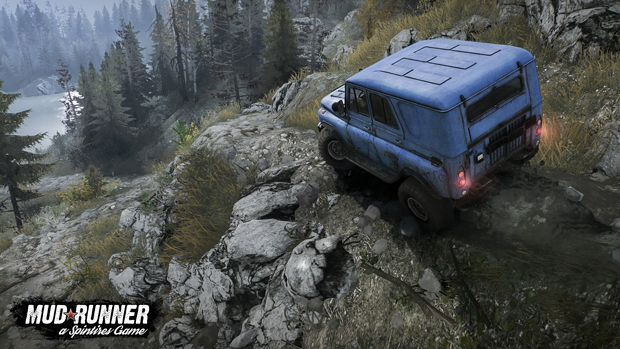 Once you start the main campaign, however, you are put to the test. You need to make many deliveries across the map, taking your time and analyzing your paths and how you are going to get around the area. Rushing can lead to an accident, making your trip much longer by the time you can get back on track. Say your vehicle gets stuck in a ditch. What then? If you can’t get out on your own with a winch, you will need to switch vehicles and drive to the location of the other vehicle and pull it out. Like I said, speed is not the priority. I’ve never had such an appreciation for the hard work people put into driving these vehicles in real life!

The game looks gorgeous, with beautiful vistas that will test your skills every step of the way. This one is packed with detail, from the mud, to the trees and the roads… to everything in the game, really. The lighting is fantastic as you will get to see thank to the game’s day-night cycles. The game also captures the sound of the trucks very well. You can hear the engines roar or purr depending how you are driving, and when something changes the way you are driving you can hear some issues with the truck as well, which can make you panic. 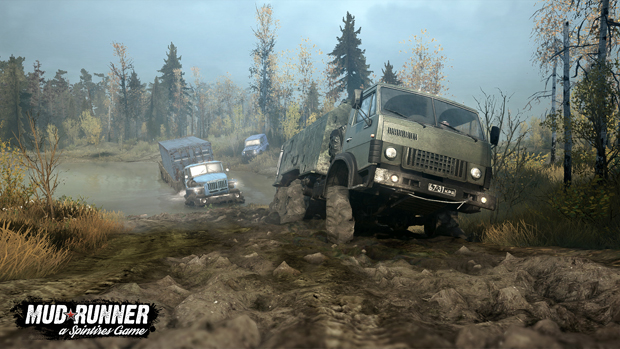 The game does have a Platinum trophy, but it’s one of those platinum trophies that will be very difficult to obtain. This is a tough game made even tougher by a hardcore mode in which you actually need to load all of the vehicles on your own before you can go to do deliveries.

Spintires: MudRunners was an interesting surprise for me. At first, I thought I was getting a racing title, but I quickly saw that wasn’t the case – it morphed into an experience I have never had before! It was difficult, but in a good way, and really challenged the way I play games with vehicles, as it’s not just about going fast, but about getting things done right.

Disclaimer
This Spintires: MudRunner review is based on PS4 copies provided by Focus Home Interactive.

Remaster For Star Ocean: The Last Hope Out On PS4