Bubsy the Bobcat is back! With the resurgence of mascot platformers, is it the right time to come back? Find out in our Bubsy: The Woolies Strike Back review!


Our favorite Bobcat is making a triumphant return 20 years after virtually disappearing from the world stage. Yes, that’s right, Bubsy is back and starring in an all-new adventure, Bubsy: The Woolies Strike Back! Yep, those no-good, yarn stealing always annoying intergalactic trolls, the Woolies, are up to their no-good ways once again! They’ve stolen Bubsy’s most prized possession, the Golden Fleece. Now Bubsy is on a one Bobcat mission taking on Woolies, Bumble Bees, Sharks, and UFO’s to collect an insane amount of yarnballs and bring his Holy Grail of Wool home.

Features:
•2.5D Platformer with beautiful 3D models and stunning levels and backgrounds
•Multitude of character animations and expressions that brings the iconic Bubsy to life as never before
•Jump, glide, and pounce through 14 levels of thrill, excitement and yarn!
•Local and global leaderboards – compete for high scores with your friends and the world!
•Unlock treasures, powers, and extra lives to create all-time high scores

After having a few good years of strong mascot platformers hitting the gaming scene, with a new game from Sonic, a Crash Bandicoot trilogy, and the highly anticipated Yooka-Laylee. Not all have been perfect, but they have given a nice boost to the genre. When I heard we were getting another Bubsy game, I was mildly surprised as he was never one of the bigger or best mascots, but I was interested to see what a new developer could do with him. Unfortunately, this game fails on most accounts.

Bubsy is a throwback to platformers of ages past from the Super Nintendo days, for better or worse. You play as a bobcat named Busby, and he needs to recover your golden wool which has been stolen by the aptly named Woolies. I don’t understand why said Golden Wool is so special, but hey, that’s the motivation for this one! As Bubsy you can jump, pounce (a long jump with an arc), glide and climb some walls. That’s it. 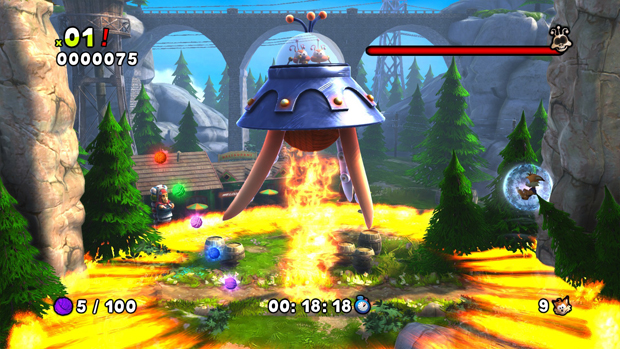 The game is a basic platformer where you go through each level, and you’ll need to collect things while defeating enemies as you try to make it to the end. In each level, there are 600 balls of yarn to collect (no, I am not kidding). I spent the first few levels obsessively trying to collect them all and getting close, but not all of them. I was soon spending 20-30 minutes backtracking, trying to find them all. The worst part was you have a timer at the bottom, and there is no worthwhile reward for getting them all. I then started to just run through the levels without carrying about collecting the balls, and I was done in a few quick minutes.

There are also five keys in each level, which are placed at weird spots in which you’ll probably have to die just to jump to grab them. If you can get all five, you’ll unlock the vault at the end of the level. You know what’s in that vault… more wool to hit your 600 mark! There are black T-Shirts you can collect to give Bubsy an extra hit, and if you collect more, then they become extra lives. Thankfully the game doesn’t last long, since it only has 14 levels in total, you can probably complete everything in a few hours.

There are a few boss fights, but their structure is infuriating. It’s you versus a UFO, and you need to jump on the glass dome since that’s its weak point (the game actually tells you this). The first one is fairly simple, but the second one is tricker. The problem is that every time you get hit you die and have to start off at the last checkpoint in the battle. 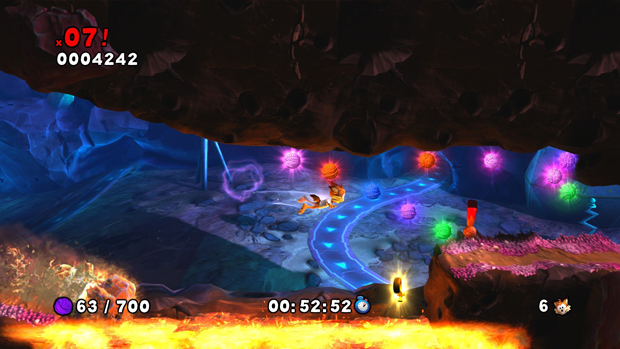 My problem is with all of the leaps and bounds platformers have made over the years to change the way we play to modernize things, and this game ignores all of that. It’s short, it’s not that fun, and it’s packed with useless collectibles. As I was playing, I started to think at least I can get a Platinum trophy for getting everything, as my final prize… that being said upon further research the game doesn’t even have a platinum trophy!!! What’s my drive to complete it??

The game itself looks fine, although the enemy variety is low, it does what it needs to. The music isn’t great and plays on a loop without much variation. Bubsy also talks a lot but repeats itself often… and I do mean often. You can actually turn his rate of speak up or down, and I would suggest putting it down to the bottom and not having to hear him at all, cause is very annoying.

I did think to myself, maybe this title isn’t aimed at me, so I let my six-year-old, who is very adept at games, play it. Within an hour he had finished 2/3 of the game and decided he was done with it. I really expected him to like it, and was surprised by this, but it really speaks to how the game plays and how there really is no reward for what you’re doing. 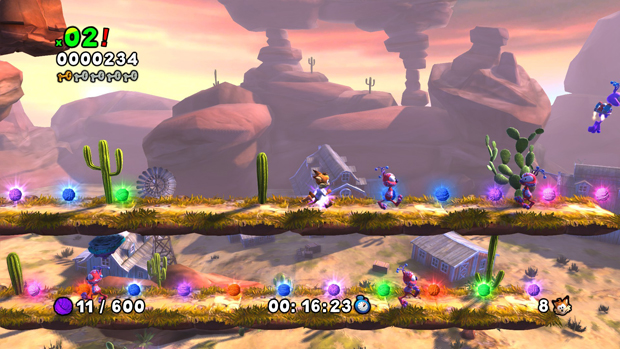 The honest truth is that this game feels like a cash grab. It’s $39.99, and I can recommend many games that are better and which cost half to three quarters less. It’s short, lacks a compelling reason for the obscene amount of collectibles, and doesn’t do anything new. At this point, you would be better skipping this cat and trying something else.

Disclaimer
This Bubsy: The Woolies Strike Back review is based on PS4 copies provided by UFO Interactive Games.

VA-11 HALL-A Will Release In North America on November 14!