The aim of the game is similar to any other tower defense game you’ve played. The environment setup for this one is of myth and magic based Roman / Egyptian times, and you go up against a plethora of various enemies ranging from skeletal armies to mage types, in ever increasing difficult waves. This is a PlayStation Move only game, and you need two controllers before you can get started.

I would first advise that you go through the short training program. You start off with the archer (Lia), and you can shoot some pots with your bow and arrow, it also teaches you the basics of teleporting from one place to another. During training, you are presented with a tower defense scenario with three waves of creatures so that you can get a feel for the gameplay mechanics. 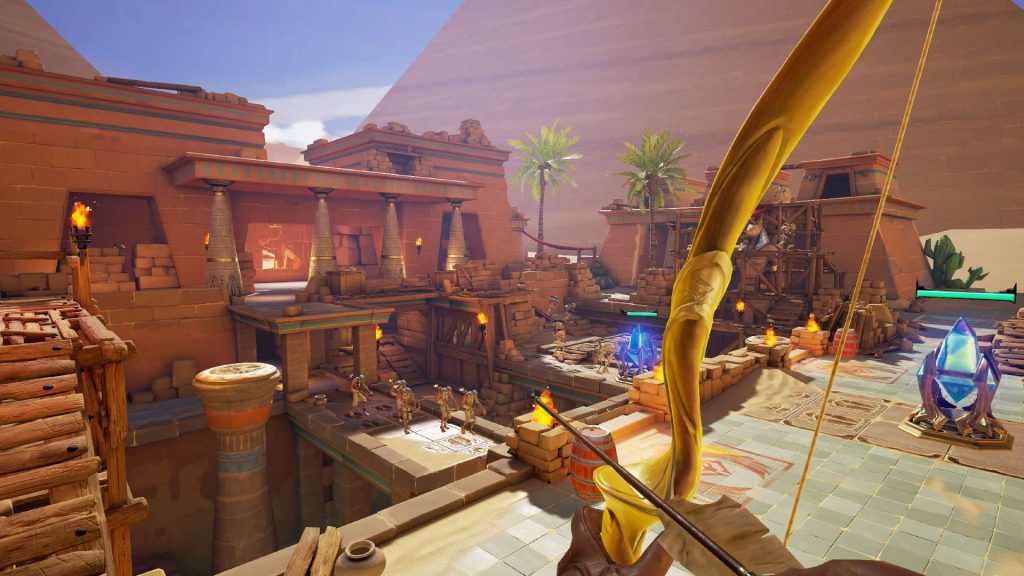 When out of training you can choose from the two unlocked worlds in which two levels are contained, there are currently another two worlds (including the Into the Ice DLC pack which is well worth a purchase as it is very challenging and fun), but you need to complete the levels in the other worlds to unlock these.

When you select a level, you can choose your character (as well as if you are left or right handed). There is the Archer, who grants you a bow on your left hand which means you must use your right hand to draw and shoot an arrow – this character is a little slow, and you need to be very precise. You can also select the Mage, with a spell book in your left hand and a wand in your right one – pressing the trigger in your left hand generates a spell which you must then grab with your right hand to throw at enemies. This is great for taking out smaller groups of enemies, but generating a spell, grabbing it and then throwing it isn’t the fastest method, and accurate throws can be difficult. 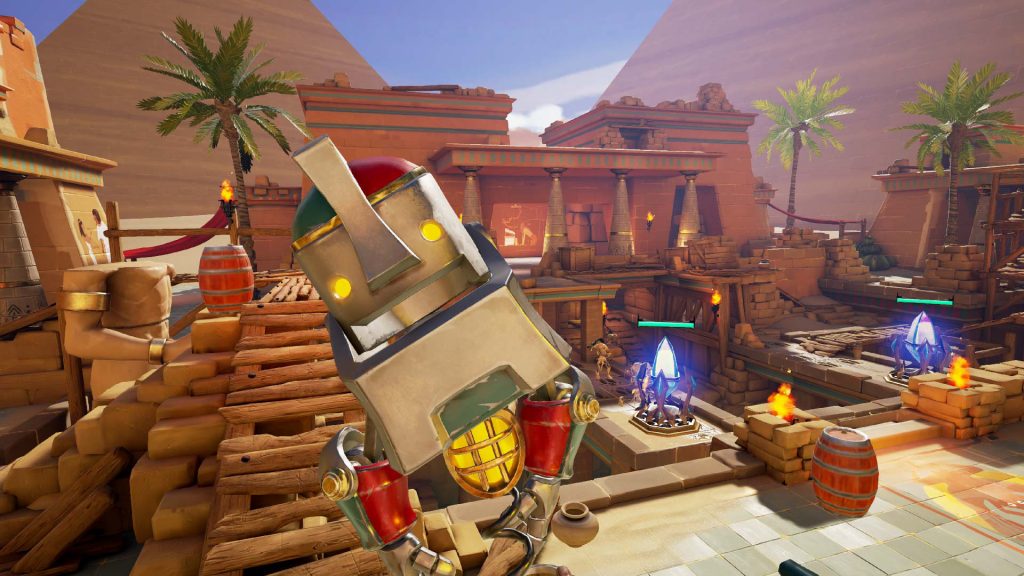 There’s the Puppeteer, with a robot in your left hand that you throw anywhere on the level. Once it lands, any move you make he does as well, which is kinda cool. The robot is powerful but it takes time to move him from one spot to the next, and if the puppet takes too much damage it becomes stunned and can be out of action for a while. And then you have the Gunner who dual-wields shotguns. Point, pull the trigger, and your job is much done – there are four shots in a magazine before you need to reload which is done by flicking the controller up. My current favorite is definitely the Gunslinger, mainly because of the ease of use. I did find the Archer harder to use in battle as sometimes it lost tracking and I was unable to fire off any proper shots.

The Into the Ice DLC adds a Viking to the mix, an axe-throwing giant of a man that hard to master as it will take time for you to properly learn how to maximize the potential of his throwing technique. Oh, and you can also unlock more powerful weapons for each character, and I definitely suggest you do so since they’re worth the effort due to the extra bump in strength.

Each round of Ancient Amuletor plays like a standard tower defense game, the only difference is that you play from a first-person perspective. When in the level you can teleport around the map to locations (pillars) via the move button on the right-hand Move controller. I usually hate having to use teleporting mechanics for a PS VR game, but in this tower defense scenario, it actually works really well. 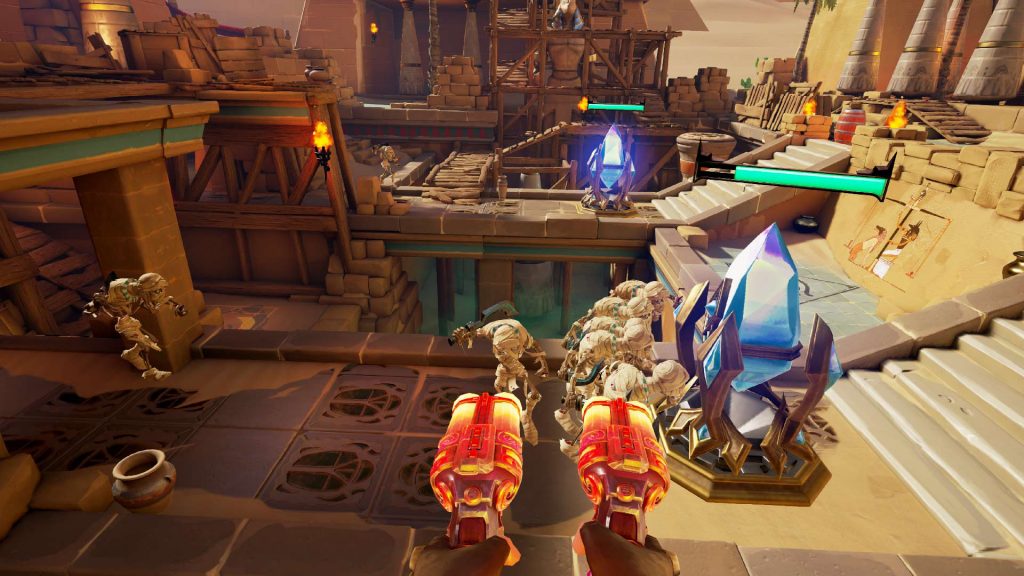 You have to protect amulets that are placed around the environment so that the advancing hordes don’t get to them. Some of the hordes are harder to kill than others, and in my case, in particular, the games that cast spells which disable teleporting or lock you in place on a pillar are a big headache – they can even throw spells that pause you for 10 seconds where you are unable to do anything apart from watch helplessly as the hordes bash the crystal amulets to pieces!

To help you out with the hordes there are a few nice interactive booby traps such as exploding barrels, catapults that fire said barrels, and also axes that are triggered by shooting them. These are great for taking care of business when you start to feel a bit overwhelmed as they can make short work of your enemies when timed right. 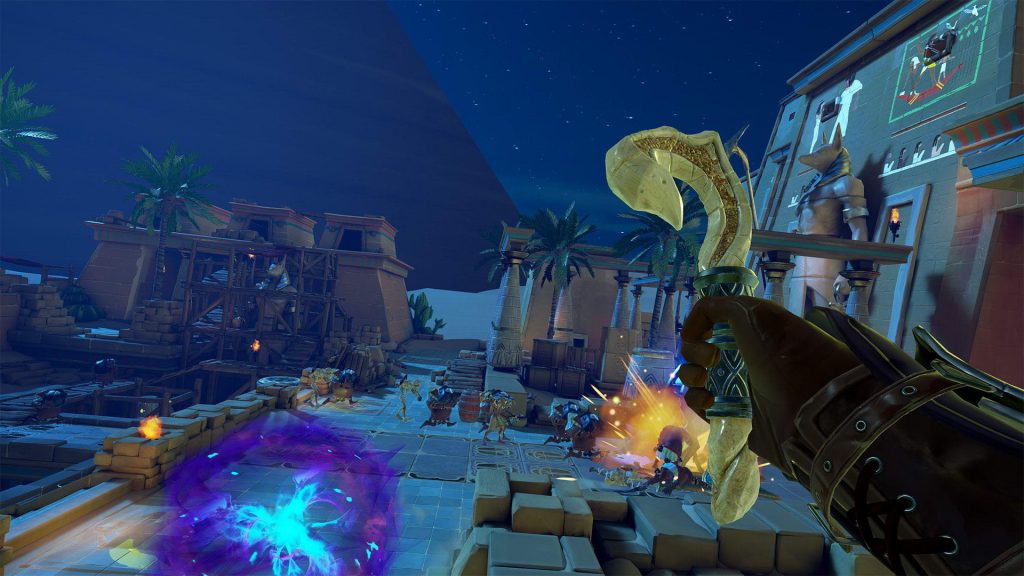 There are also boss rounds at the end of each full world, and these are great characters that really stand out, but they’re kinda predictable. Having said that, they’re still hard to kill, but they do have weak spots – I won’t go into those as I don’t want to spoil the surprise for you!

The environments are pleasing to the eye, and the sounds are nicely done and mirror what’s going on the screen itself – along with some nice ambient sounds that just add to the gameplay. The gameplay is surprisingly addictive, and it kept me wanting more. I ended up finishing the main levels in the game in a couple of hours while playing on Easy, but there’s some replay value in here since each level has three difficulty settings plus an endless mode that you can unlock by completing all the previous difficulties. You are also ranked with up to three stars based on your performance. So if you like what the main game has to offer certainly get the Into the Ice DLC since it offers an extra two stages – hopefully more DLC is on its way! 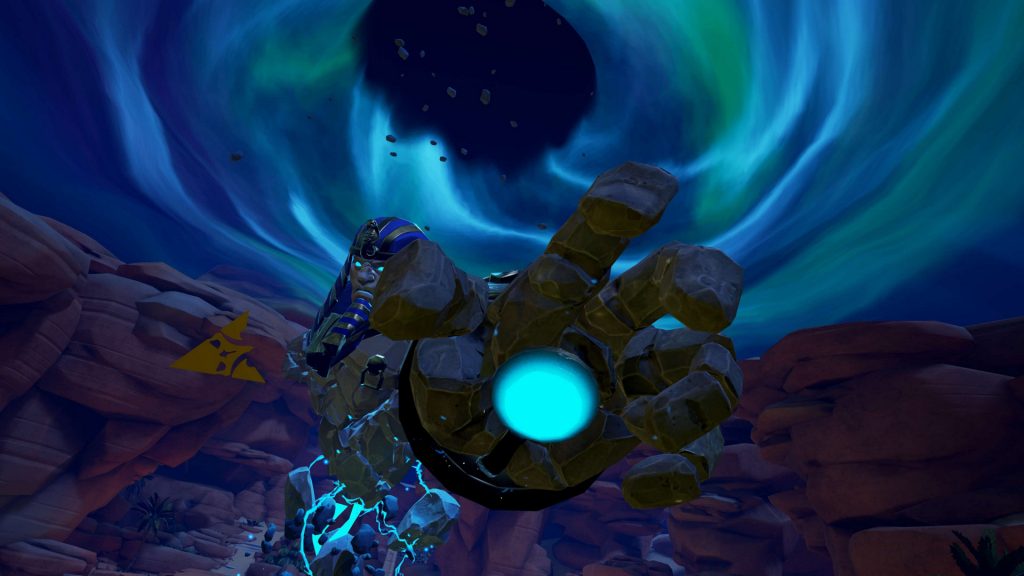 Multiplayer is basically co-op where you fight against the hordes. But during my time playing it was hard to find a multiplayer game for me to join which is to be expected since online communities don’t just grow in a few days. Hopefully things pick up, and I look forward to playing with some of my friends who will hopefully buy this one as well.

All in all, Ancient Amuletor was fun to play and is well worth the purchase. It offers a good experience for the asking price, and its DLC pack is only a few bucks to gain access to a new theme, a new playable character, two new stages and more. 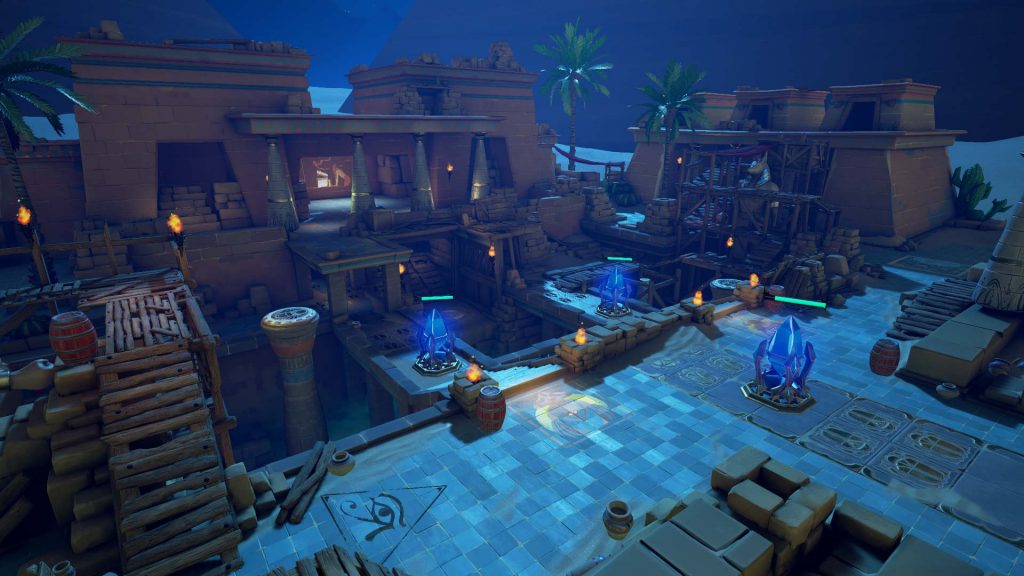 Disclaimer
This Ancient Amuletor review is based on a PS VR copy provided by Time of Virtual Reality.