Earth Atlantis from Pixel Perfex and Headup Games is a side-scrolling shooter with a very interesting look in which you hunt monsters. Check out our Earth Atlantis review!


In Earth Atlantis, you get an opportunity to explore a world that is completely submerged in water. You explore in your tiny little ship, and you will see buildings, cars, famous landmarks and more in the background. The attention to detail is great and does give you a sense of what the world looked like before the apocalypse – Earth Atlantis is set in a future in which machines rule the world. 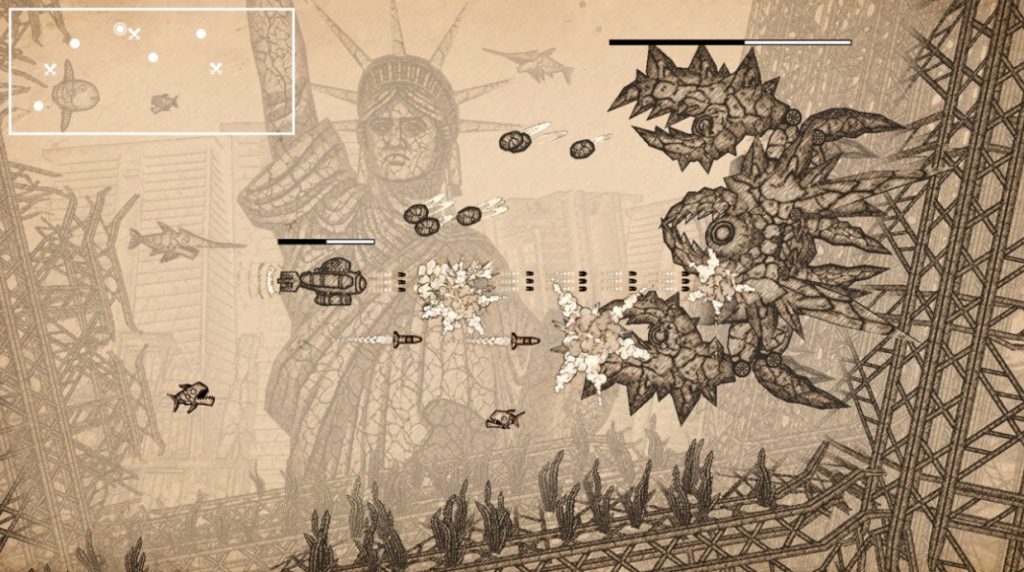 Since the game is packed with water, all kinds of marine life have surfaced, from small fish, crabs, and swordfish to octopuses, sharks and more. You play as a hunter, and as such it is your job to hunt these giant ocean monsters and kill them in an underwater bullet hell adventure. Killing the smaller fish will drop power-ups and help to refill your health meter, and you can also find some health and ammo drops across the environments you explore. You’ll also find crates with lettering on them, with a P for primary weapons, E for Electricity, H for homing missiles, B for bombs, and M for missiles. 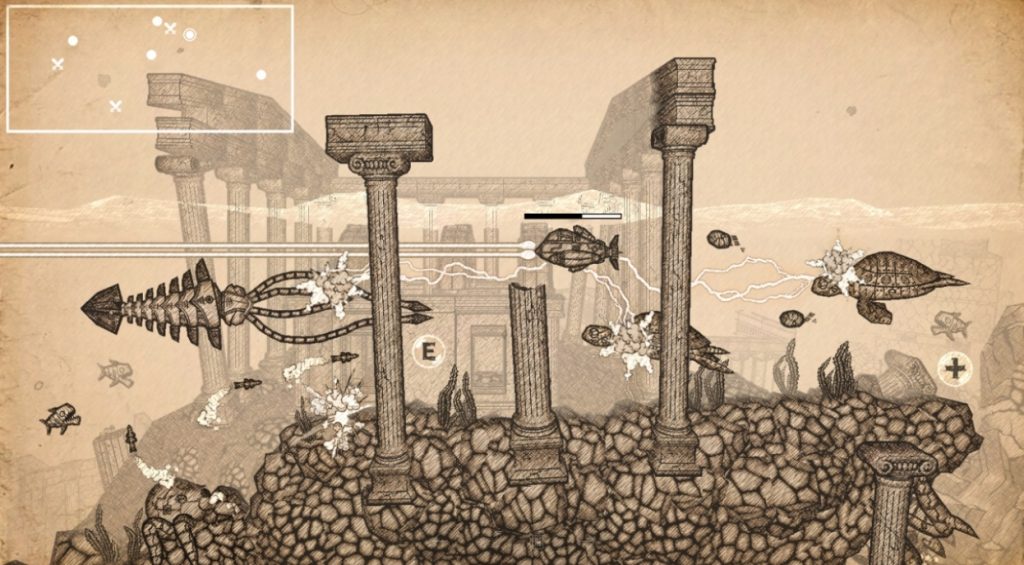 Unfortunately, you cannot hold multiple weapons at once, so you’ll need to manage things to see which item is best for each scenario. For me, electricity is the best one of the lot as it can electrocute and kill smaller fish while putting a dent in the health meter of the larger marine life. Be sure to try all weapons to see which best suits your playing style! Collecting more power-ups for the same weapon will strengthen it, allowing you to deal more damage. 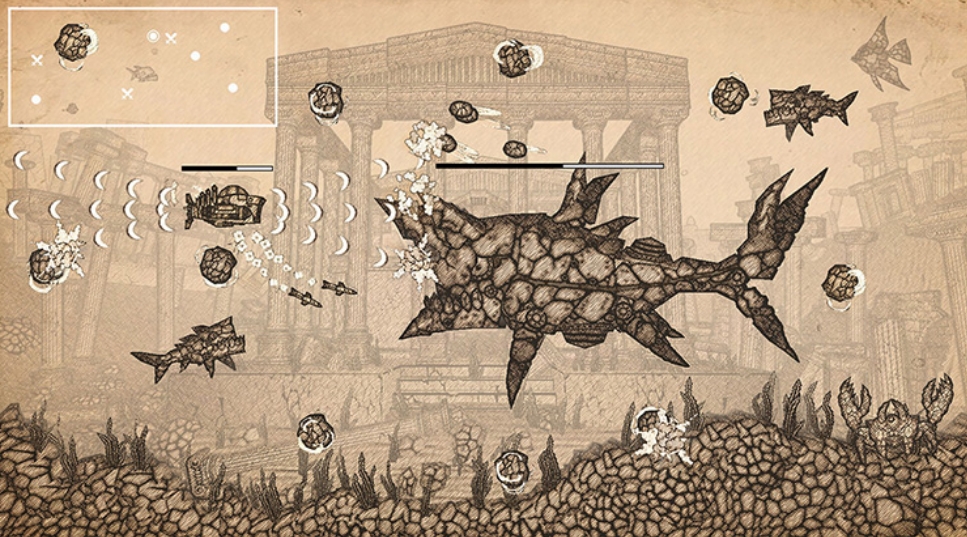 Most of the marine life poses little or no threat to you, but bosses are a different story. You’ll need to learn their movement and attack patterns or else they will destroy you in a few seconds since they take huge chunks of your health for each hit they can land. As you defeat the bosses, more sections of the game will open up so that you can carry on with your adventure, giving this a bit of a Metroidvania vibe. 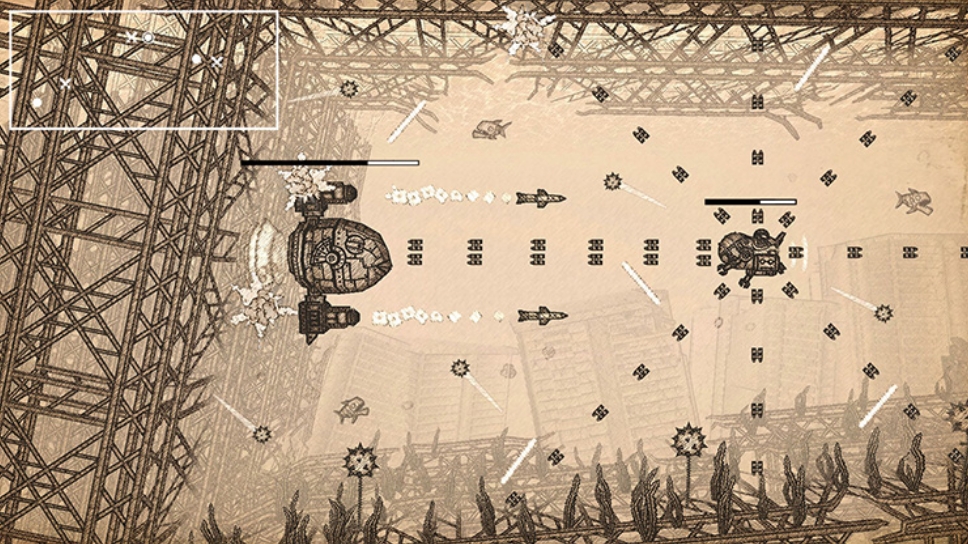 The controls work fabulous once you get the hang of things, and the graphics have a nice feel to them with lots of black, white and brown being used as the focus of its color palette. This one definitely stands out from other shooters since most releases in the genre end up being very colorful. Oh, and the game’s catchy music does a good job of complementing the action on the screen! 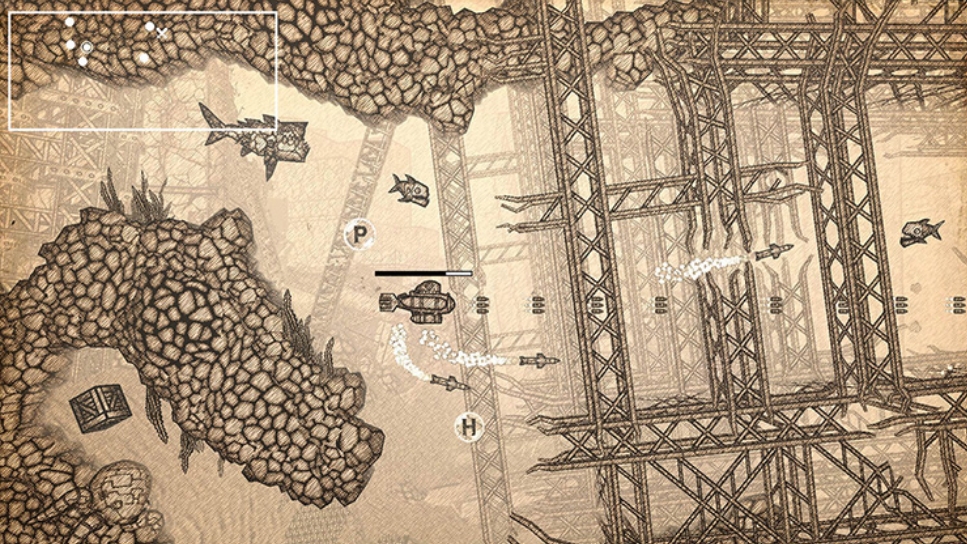 Earth Atlantis is a solid 2D shoot ‘em up release on Nintendo Switch with a unique look that will grab your attention as soon as you start playing. There is a nice variety of enemies to defeat and bosses to conquer, and the recent patch released for the game has increased drop rates for items and sub-weapons, made the ship move faster and rebalanced bosses so that players of all skill levels have a shot at enjoying the game. The publisher has also changed the game’s Nintendo Switch icon to something a bit more snazzy if that’s the sort of thing you look for in your Switch games! 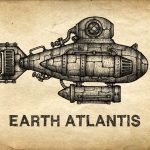 Fun shoot 'em up with a very unique look

Disclaimer
This Earth Atlantis review is base don a Nintendo Switch copy provided by Headup Games.