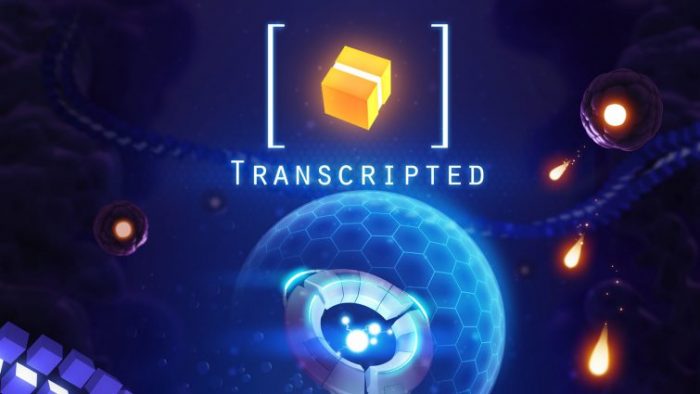 Transcripted is a game that mixes a match-3 puzzle game with a twin-stick shooter. Weird, right? Find out if the experiment worked in our Transcripted review!


This is a double review for Transcripted. The game was played by EdEN and Ceidz. This review presents what they both had to say.

As the intro for the review states, Transcripted is a mix between a game like twin-stick shooter Geometry Wars and the classic match-3 puzzler Zuma, in which you must pop colored blocks. I was relatively skeptical about the premise at first, but after playing the levels, I have to say it went better than I expected!

To begin with, in Transcripted, you’ll be investigating virus infections in organic tissues using a nano ship that is remotely controlled by Adam, the main protagonist of this story, to find the source of a strange disease that is affecting many people. By progressing through the story, you’ll soon see DNA-like structures (this is the part where this release looks like Zuma) that must be destroyed to retrieve some analytical data about the strange virus. 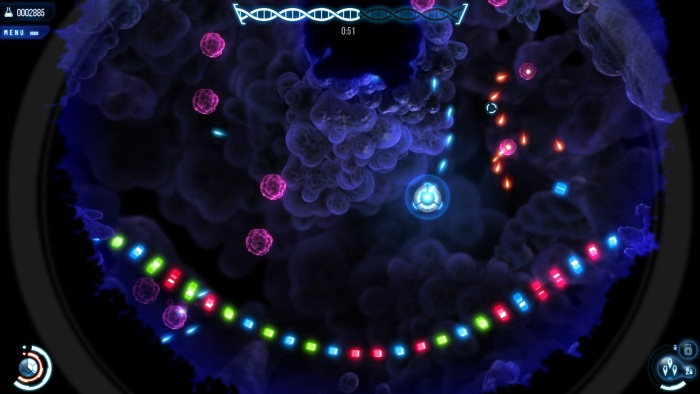 The nano ship is easy to control, and you can navigate using the left analog stick. Aiming is done using the right stick and shooting is done using the R2. Your main objective is to retrieve small colored blocks by destroying the viruses in the environment then fire said colored blocks into the DNA structure in a match-3 setting. The level will be over when enough samples (3 matches) are recovered, and is clearly visible with a progression ribbon in the upper section of the screen.

One of the things I loved, and that I thought was a great idea is having two different difficulty settings: one for the shooting section of the game, and another one for the match-3 puzzle part. This is honestly one of the greatest ideas in gaming I’ve seen in a long time, and it was really comfortable to slide the shooter part down to easy while keeping the puzzle part at normal.

I wanted to mention the Trophy List which is pretty intense for this release. It requires you to finish the fifth chapter to obtain your first bronze trophy, and this will take some time to achieve. All the other trophies are for crazy requirements that require plenty of skill, so if you’re looking for a challenging trophy list this is a great game for you!

I liked playing Transcripted and was impressed by its gameplay and its presentation. I recommend this release to players looking for a good twin stick shooter! 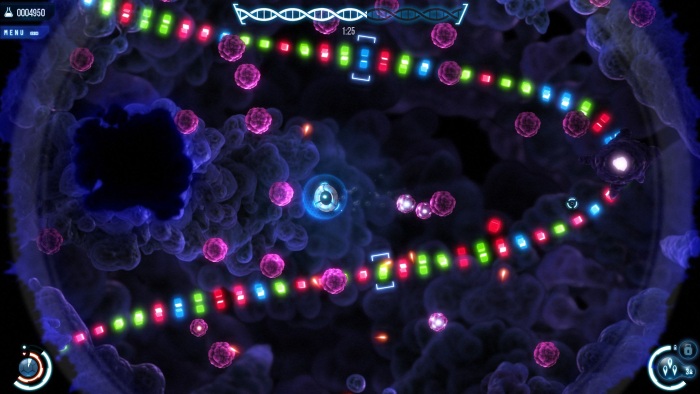 As Ceidz said, this is a mix of a match-3 puzzle game and a twin-stick action shooter. Because of this, at the start of the game, the difficulty settings will allow you to select between Easy, Medium and Hard. The interesting thing is that you can select a different difficulty for the shooter part of the game and another one of the puzzle part of the game.

For the shooter part of the equation, Easy makes it so that you take less damage, and there are fewer hostiles to take out; in Medium damage is normal, while there are regular swarms of enemies to destroy; Hard turns the game into a bullet hell with a bump on the damage you receive and a considerable increase in enemies. For the puzzler part, Easy makes it so that the puzzles are slower and there are fewer colors to clear; Medium is your average puzzle speed and number of colors; Hard increases the speed of puzzles and all possible colors are used. 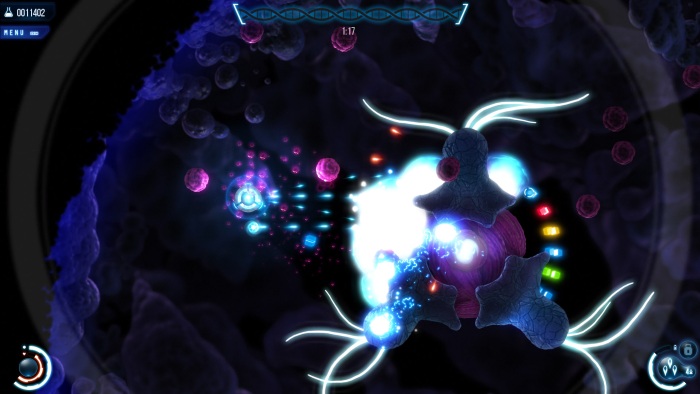 The game has a nice shine to it which makes it easy for the action to pop, which is great considering you need to almost be in a Zen state of mind as you focus on what is happening on the screen. While you play, the game might throw some new info your way, which you can check with the Triangle button to take a small breather, but I suggest you time this right, or else you might be overwhelmed when you return to the game.

As you destroy the enemy pathogen, you’ll get to collect colorful crystals that will help you on your quest. For example, the purple crystals will allow you to shoot your weapons without having to worry about running out of energy – but only for a few seconds. Blue crystals, on the other hand, are raw data about the pathogen you’ve defeated and offer XP so that you can upgrade your ship. As for Yellow crystals, they increase the power of your active weapon and level it up, improving its effectiveness. 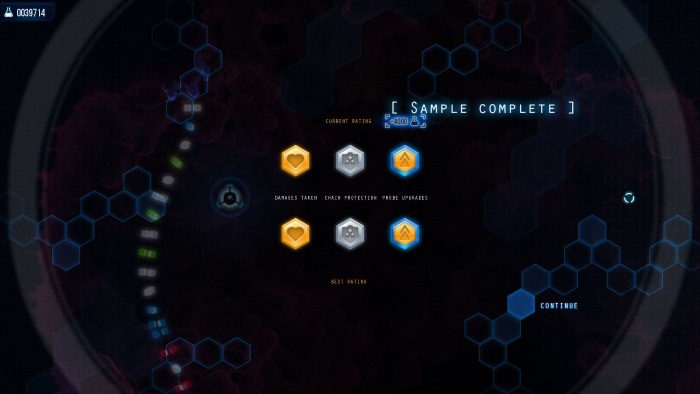 Final Thoughts
Transcripted is an original release that crosses over two other great releases: Geometry Wars and Zuma (which is a game I played A. LOT!), and it works in the end! We liked the underlying story, and navigating in the different environments. For the asking price of $8, this is a release you should keep under your radar!

Disclaimer
This Transcripted review is based on PS4 copies provided by Alkemi Games.