Splasher from Splashteam and Plug In Digital is ready for you on PlayStation 4. Read our Splasher review to find out why this game is a must-have for your system!

Developed in collaboration with speedrunners, and a small team led by a former Game Designer and Level Designer at Ubisoft, Splasher is a 2D platformer that brings some fast action to your PS4 console. The story of Splasher is about an Inkorp worker who decides to rise against the paint factory’s boss to stop his evil ambitions and save the other Splashers. You’ll be going through 22 trap-filled levels with your paint cannon and three different types of paint to help you stop the Docteur. 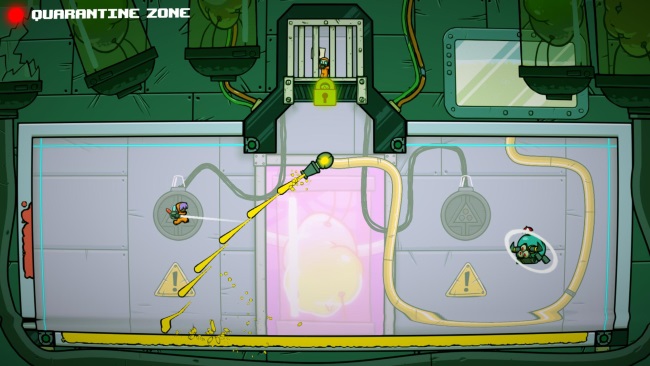 In each level, you’ll be trying to save the 6 Splashers that are scattered around the place, sometimes in hard-to-reach places, all while also trying to collect 700 drops of yellow paint that will allow you to rescue a seventh one. If that reminds you of games like Rayman Origins or Rayman Legends, it’s probably because of Romain Claude, the team’s lead who was at Ubisoft, worked on those games. The influence it has on this game can’t be unnoticed, but this is far from being a bad thing, as those two games were more than excellent.


There are two things for me that set this one apart from the Rayman series. The first is the sense of speed they gave the game. The way your character’s animate and how the levels have been created gives us a platformer that has an overall faster pace than what you have in any of the Rayman releases (and I’m not even talking about time trial runs, more on that later). 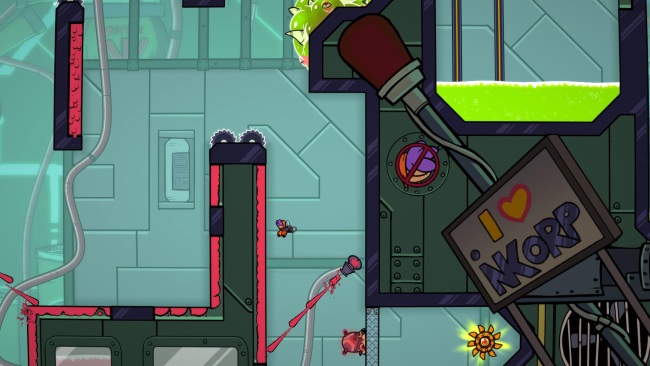 The second thing is the paint, which plays an important role in how the levels are played. The red paint allows you to stick (and run!) on floors, walls, and ceilings. The yellow one will make things bouncy, and allow you to jump around some great distance or just go pinball crazy when you’re bouncing in tight corridors. The last one is basically water which can kill enemies or remove the paint from some surfaces. All this together makes for some good variety, and from the moment you acquire your paint cannon a whole new way of playing the levels is opened to you.

With the game set in a paint factory, you’d expect things to be colorful, right? Well, that’s exactly what Splasher is like! Level design is beautiful, packed with colors that all fit nicely together, with backgrounds that have just enough details to make you feel you’re in that factory, but not too much to have your eyes burning. The soundtrack was composed by Aymeric Schwartz, who in the past has worked on games like Rayman Origins or Valiant Hearts, and is made up of mostly electronic tracks that were nicely crafted to both get you in the mood and again give you that sense of speed the game has. 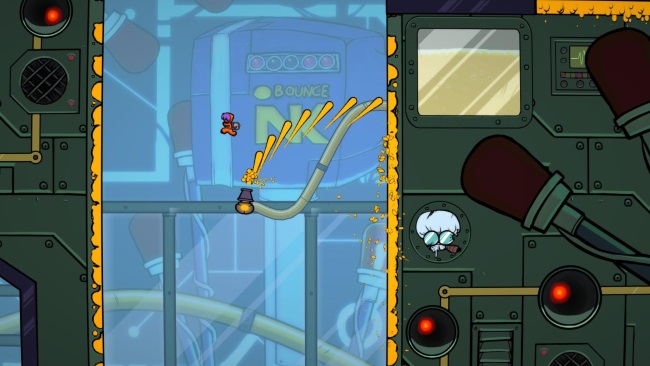 This game is good. Real good! All the levels I’ve played so far were great and challenging, but still doable, so it’s far from being an impossible task to complete. While most of the Splashers you need to find in the levels are easily seen, there are still a few you might miss that you’ll have to go back to get by replaying levels a couple more times.

And then, when you think all is said and done, you can tackle time attacks and speedrun. This is where the real fun begins. No time to stop and think now, so you just have to go blazing fast in the levels, sticking on walls when you can, bouncing on others, giving you an even more incredible sense of fast-paced action. I do have to say though, while time trials will add a lot to your replay value, they’re not for the faint of heart. It’s not easy getting started on that bronze medal in the levels, so ramping up your skills to get the platinum one will be a real challenge.


And that brings me to the trophies. Collecting all the Splashers in the levels is something that will probably be achieved by a lot of people, but those time trials and speed runs… ouch! Time trials are done individually on each level: no Splasher to collect – Platinum medal them all. Then the selfish speedrun, where it’s one big timer for all the levels back to back, no Splashers again to collect. Then the normal speedrun, where you can collect Splashers, or not. And finally, the Gotta Catch’em All Speedrun, where you will only be able to proceed to the next level if you collected all the Splashers. Did I mention you have to get Platinum medals in speed run modes too? Because you need to. So that Platinum trophy, well, it will clearly not be an easy one to achieve, but one I’d be really proud to have! 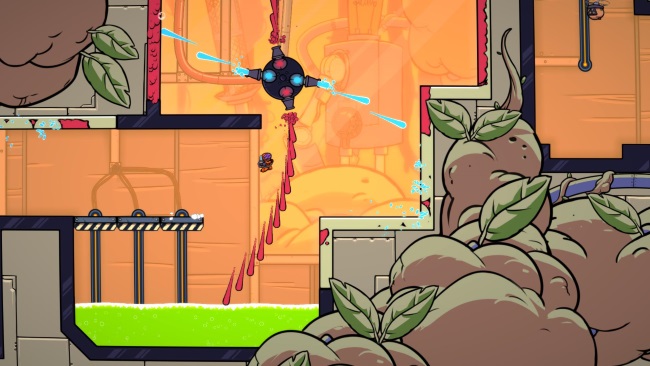 While Splasher is not revolutionizing the genre and clearly has a hard to ignore nod or two to the lead’s past projects, Splashteam has done an incredible job in creating this platformer. The game plays great, is beautiful to look at, and has more than enough challenges to take replay value to the top. It’s the best platformer I played in the last couple of years, the last one probably being Rayman Legends (which we reviewed a few years ago), and I truly hope the success of this game will give us a sequel in the future!

Disclaimer
This Splasher review is based on a PlayStation 4 copy provided by Playdius.