A bullet hell fighter is a weird concept, but one that is definitely fun in short bursts. For Touhou Kobuto V: Burst Battle you’ll get to control one of nine characters in 1 vs. 1 battles in which you’ll need to make good use of your available attacks. There are short range melee attacks, long-range bullets and even mighty spell cards to aid you in battle. But you can’t always be on the offensive so you’ll also need to dodge and guard as needed or else you’ll be overwhelmed by your enemy’s onslaught before you know it. 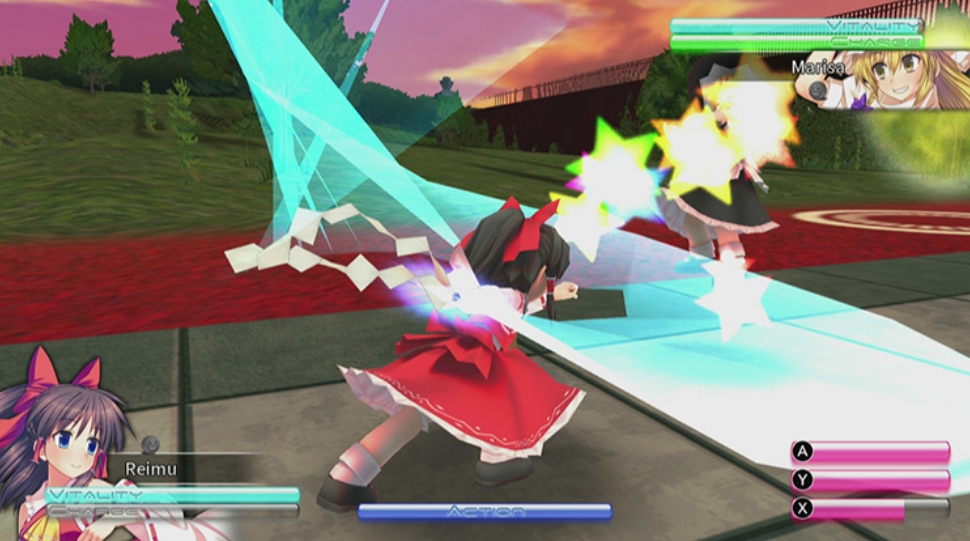 And now, let’s talk about the game’s controls for a bit. You can move around either with the left analog stick or the left non-D-Pad, while you turn with the right analog stick. You guard with the L button and dash with the R button. The B button is for jumping, while the A button activates your main attack, the Y button is for your sub attack, and the X button is for your charge attack. Once you have a spell card to use, you can activate it by pressing the X and A buttons at the same time. If needed, the game can also be played with a single Joy-Con for each player. 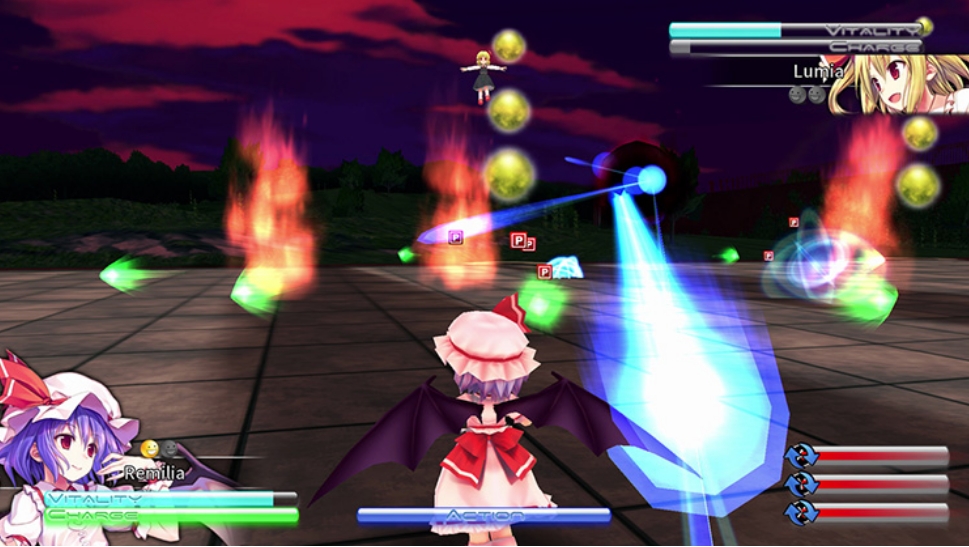 As you play, you’ll have a health gauge to protect, as well as a charge gauge to fill up so that you can use your spell card. Your enemy will also have a health gauge and a charge gauge, so be sure to keep an eye on both so that you know what to expect. Each attack you use will drain a bit of energy from the corresponding gauge, so be careful so that you don’t run out of energy at the worst of times. On top of this, there’s also an action gauge in the middle of the screen which you can use to cancel out attacks into dashes or to quick fall when you jump, so that you can keep your enemy guessing – don’t abuse it because if it runs out you’ll become fatigued and will be left wide open for attacks! Your attacks can also be modified by pressing the L, R or L and R buttons at the same time as your attack button, sub attack button or charge button, which makes it possible to have access to over 30 attack modifications in total. 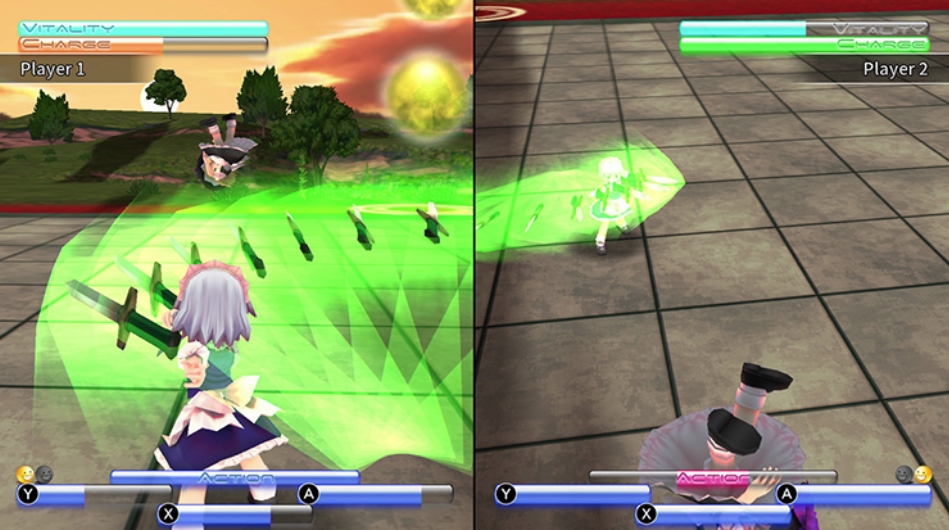 The game includes single player Story Mode in which you take control of Reimu as you read the game’s story before and after you fight the rest of the characters as you move the story along – beating the game once will then allow you to take on the Story Mode for each of the remaining characters. There’s also an Arcade Mode in which you aim at getting the highest KO count possible, and Score Attack mode in which you fight an endless line of enemies so that you can try and beat your high score. As for the multiplayer part of the game, there is Vs. Human (fight another player) and Vs. Online (same but online). 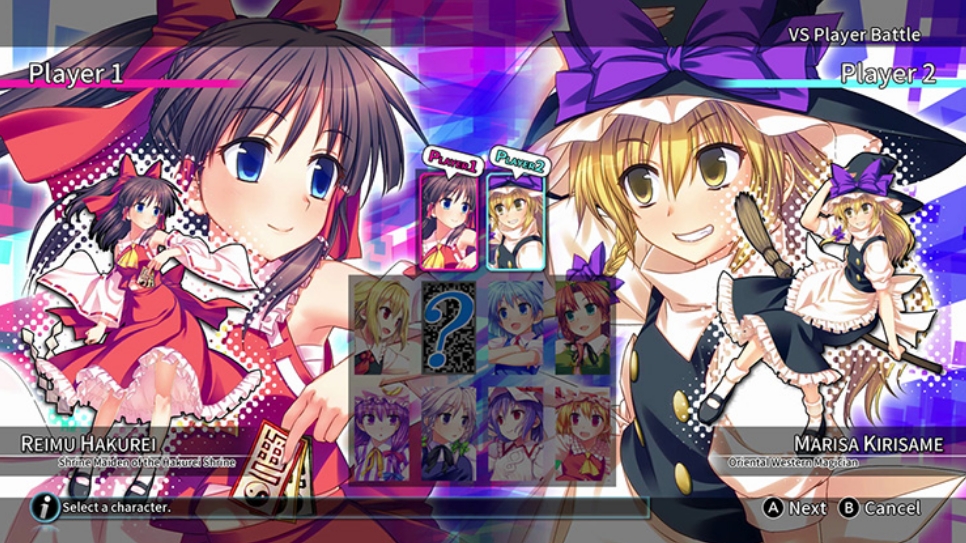 Battles are fast-paced and individual rounds can be over in a few seconds if you don’t counter your opponent’s strategy in time. You can’t just stand in place and spam the same attack over and over again, because your opponent can cancel your attacks with the same type of attack and gain some energy back while doing this while also filling up the charge gauge to unleash a spell card. You’ll need to make good use of the attack modifications so that you can angle your attacks or to dash out of danger right before unleashing a barrage of long-range attacks that go up and down towards their target. 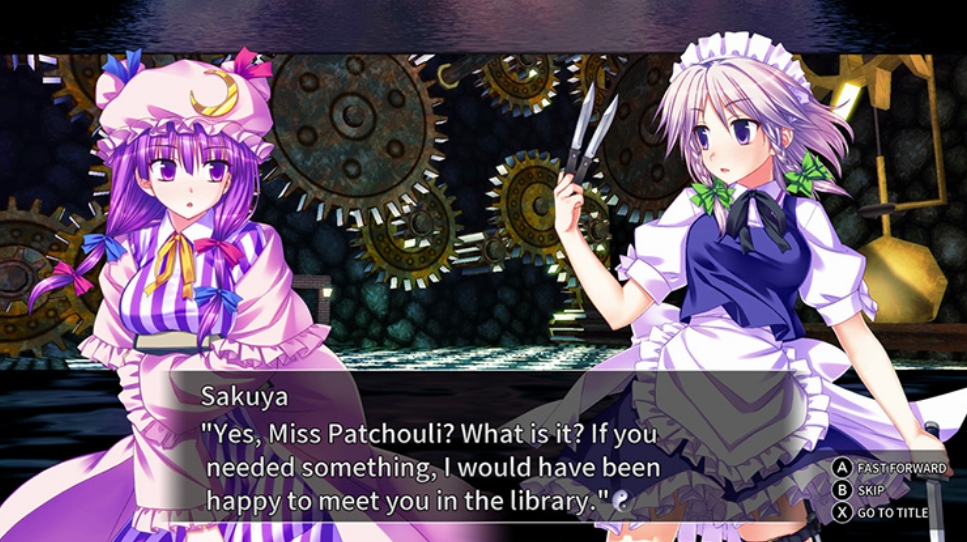 In the end, Touhou Kobuto V: Burst Battle is a fun fighter with some depth past the bullet-hell nature of its battles. Sure, the graphics are nothing to write home about and the game’s music could have used some extra variety, but battles (especially against human opponents) are interesting and different from other games out there. In the end, this is a budget release at $29.99, and it offers more than enough content to justify that price tag. If after checking out the game’s trailer and reading this review you think the game is not for you, then it’s probable that nothing will change your mind. 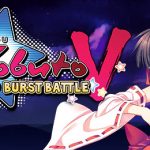 Fast-paced bullet hell fighter that isn't for everyone

Disclaimer
This Touhou Kobuto V: Burst Battle review is based on a Nintendo Switch copy provided by NIS America.