The first SteamWorld Dig is a game that I love and which I still play every now and then. I own it on Nintendo 3DS, Wii U, PlayStation 4 and Vita, and it’s a great Metroidvania-style release in which you play as Rusty as you dig deeper and deeper into a mine searching for… something. The Metroidvania influence comes from how you need to locate power-ups so that you can use them to go to areas you couldn’t visit before, making revisiting previous areas a lot of fun. You can check it in the video below:

Several years have passed since Image and Form released the first SteamWorld Dig, and between then and now they released SteamWorld Heist, another procedurally generated release within the same universe, but this time it was a turn-based strategy game. Captain Piper Faraday and her crew turned put to be a very charming gang, and the game managed to show that Image and Form could work on many genres (tower defense, Metroidvania, turn-based strategy) with relative ease. But ever since the release of SteamWorld Dig on pretty much everything, the team kept hearing the same question: when can we get SteamWorld Heist 2? 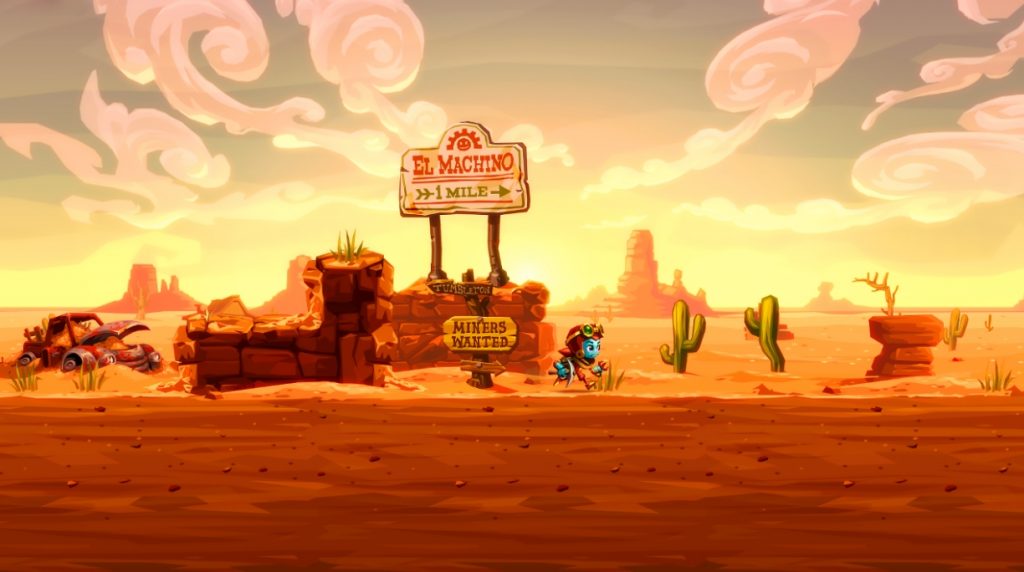 The team finally revealed the game during the February Nintendo Switch Nindies Showcase, giving us some small info updates here and there between the announcement and it’s “available first on Nintendo Switch” release. This time around, Rusty is missing, and players end up taking control of Dorothy who is out on an adventure to search high and low until she finds him. The first couple of minutes of the game are there to ease you into things… you know, before the floor collapses under you and you end up trapped and in need of a way out. 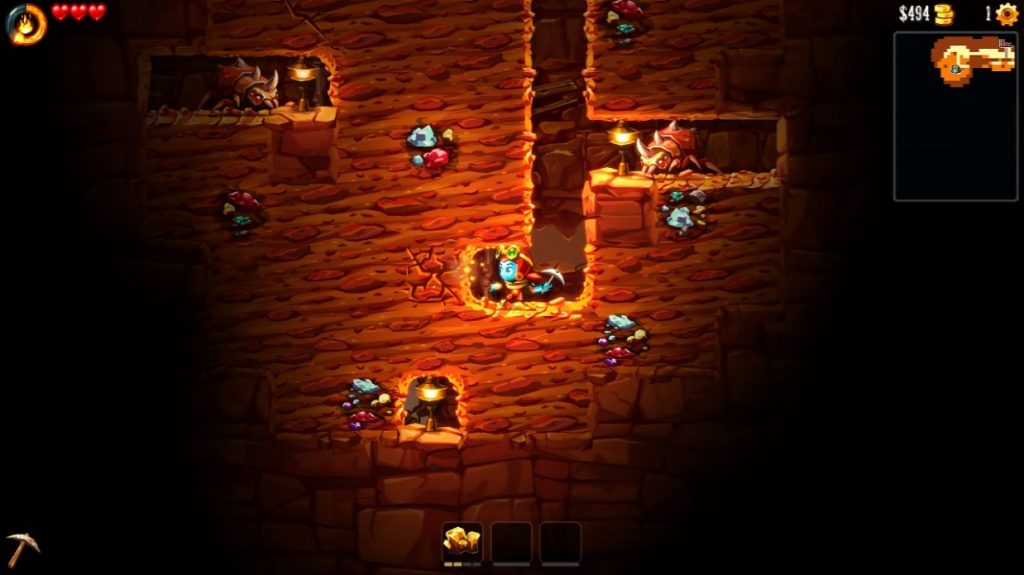 After losing your light from the fall, you have no choice but to move around with the left analog stick as you walk around to explore the area, jumping with the B button (and wall-jumping by hugging a wall and pressing the B button), and digging with the A button. You’ll run into blocks that can be destroyed with a single hit, as well as into darker and stronger blocks that can take a beating. There are also blocks that will crumble if you land on them, so be careful! 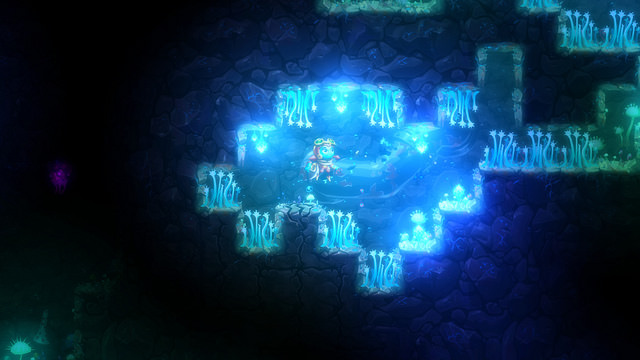 The first area in the game does a great job of being a good tutorial area, teaching you the basics, showing you that falling from great heights can be deadly, how levers that open doors are your best friend, how floor switches might open the way or activate deadly traps, and more. And it won’t take long for you to find your first upgrade in the game: the Spring Hydraulics! With this upgrade, you’ll be able to run faster by holding down the Y button, which is perfect since there are some floor switches that open doors which close very fast, so you must quickly run towards them to be able to cross to a new area as fast as you can. Running will also allow you to jump higher than before while also being able to clear longer distances. 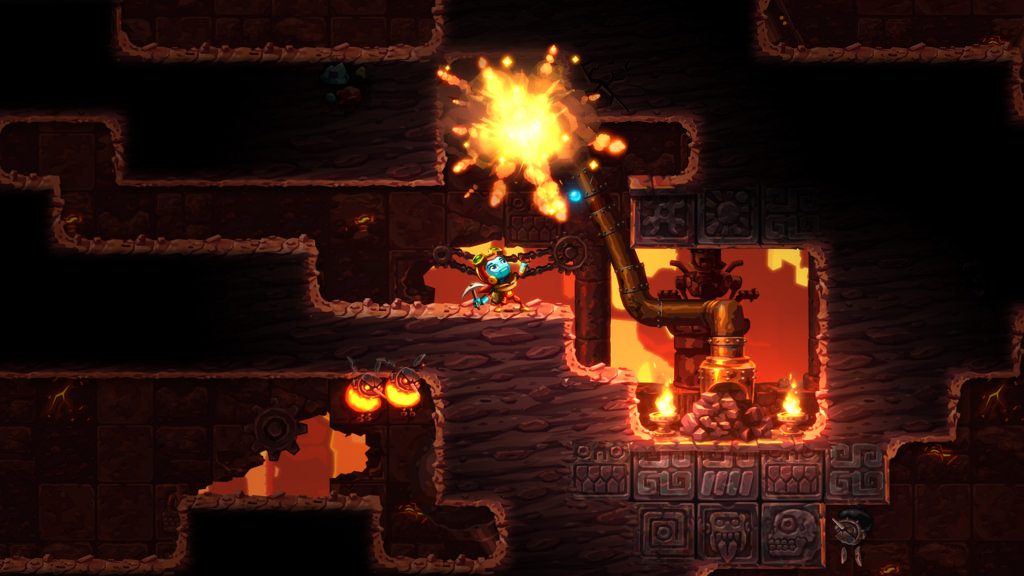 And once you get that first power-up, you start to notice how some spots in each area feel a bit… odd. This might mean, for example, that there are indestructible blocks all over the floors and walls of an area, but that one particular corner that seems out of reach has a bit of dirt on it. What if you run with the Spring Hydraulics, jump to grab onto the wall of a lone block high on a wall that can then allow you to wall jump up to that peculiar spot? Well, if you do that you might make it and could end up digging into a secret area with a golden upgrade cog. 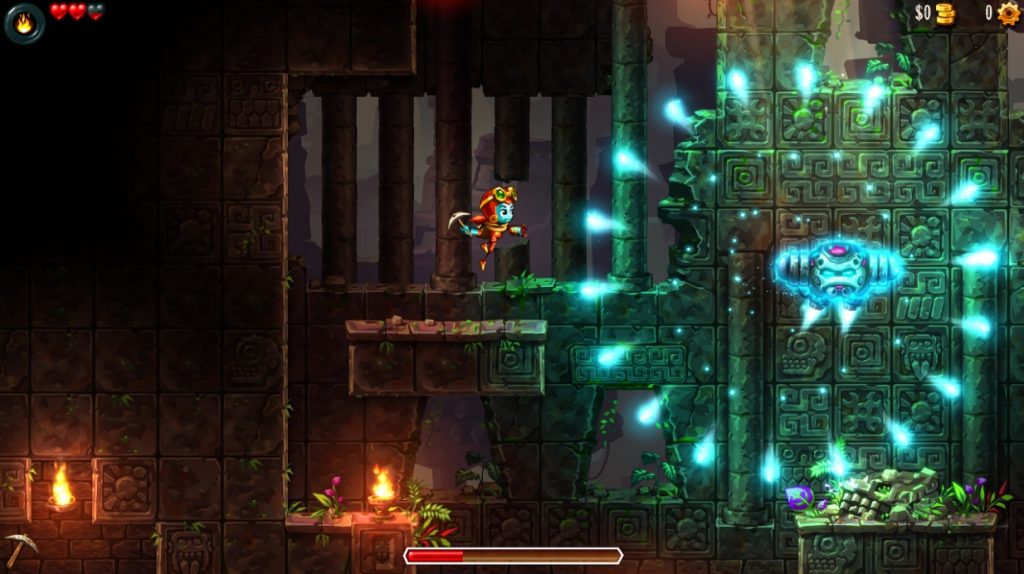 Your first big battle shouldn’t take long since you’ll need to defeat a robot totem that shoots out lighting. Some solid hits with your handy picaxe will make short work of it, and you’ll even gain the company of a glowing blue energy creature which Dot ends up calling Fen – he’ll accompany Dot on this adventure and make fun of her every now and then.


After finding the exit of the area you fell into, you’ll manage to reach a small town in which you hear about a fellow wearing a red scarf who had visited the village. Dot thinks this is a promising lead, so she decided to talk to the mayor to of she can learn where he went. The town will also allow you to use the workbench to purchase your equipment either with the gold you gain from selling the ore you find as you dig, or by using golden cogs to unlock even more powerful improvements. Cogs can be installed and uninstalled as you please, so you can mix and match as you try to find what works best for a particular situation. 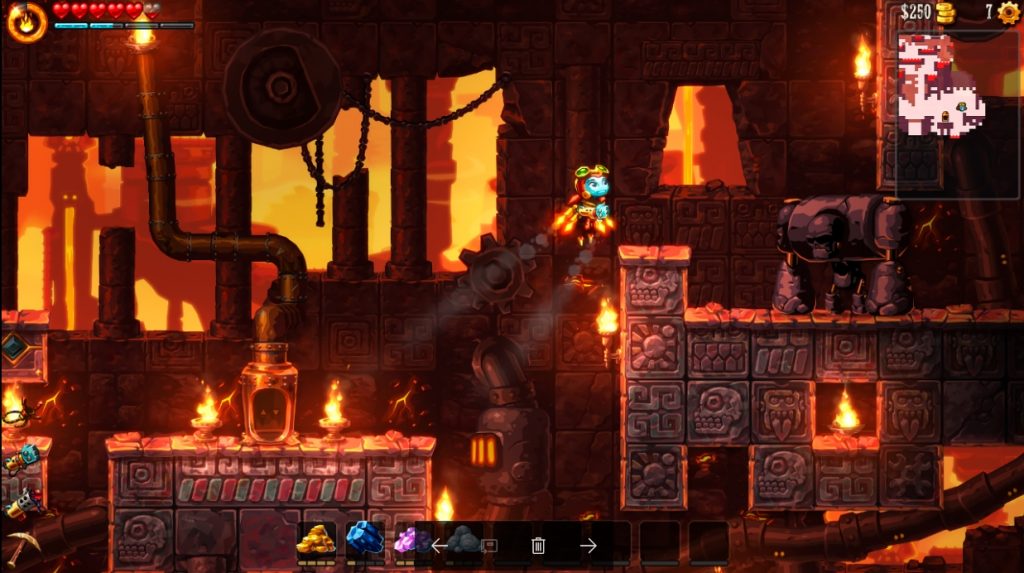 In this town, you’ll also run into Davy Bittenborough who will ask that you, please keep an eye open, or two, so that if an artifact can be seen on the map, you can decide to go grab them and deliver them back to the adventurer-looking fella who will then reward you for your effort. The rewards include blueprints which will allow you to further upgrade your items so that you can go deeper and deeper underground on every single trip you take.

As you explore each area, you should make the most of your time while digging by making sure that you defeat every enemy you find. If you do this, you will gain some valuable experience points that will allow you to level up, and for every level you gain you will receive some nice bonuses. The first time I leveled up I unlocked a 5% bonus to the money I earned from the ore I sold, which was very handy since it sped up the buy/sell process so that I could upgrade my stuff at a steady pace. The higher that bonus percentage, the more productive each of your runs will be, so leveling up makes a lot of sense. On top of this, as you level up you will unlock new upgrades for you to play with, which are definitely needed for this quest. 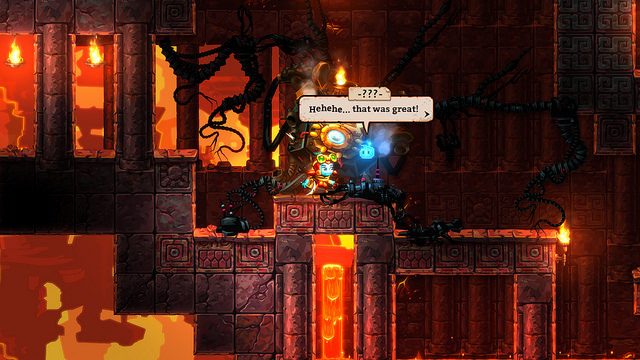 I have to say that the game’s music from El Huervo, Pelle Cahndlerby, and Mikael Norrgårdis is something that immediately grabbed my attention right from the title screen, and it never let go. The music is outstanding and really helps to set the tone of the game. You can give it a listen right here, and if you like it (as I’m sure you will), you can buy it straight from the team. I liked the soundtrack for SteamWorld Dig and had a blast with the one for SteamWorld Heist (shout-out to Steam Powered Giraffe!), and the soundtrack for SteamWorld Dig 2 keeps the train rolling into awesomeville.

SteamWorld Dig 2 is everything I wanted from a sequel to SteamWorld Dig and then some. It’s even more addictive than the first one, bigger, more dynamic, colorful and charming. Once you get started it will be hard to put this one down, so be ready for hours and hours of fun!

Disclaimer
This SteamWorld Dig 2 review is based on a Nintendo Switch copy provided by Image and Form.