[Beyond PlayStation] Etrian Odyssey V: Beyond the Myth Review

In this one, you will adventure on the land if Arcania on a quest to reach the top of Yggdrasil. You’ll begin this long journey at Iorys, the city at the heart of Arcania – and at the foot of mighty Yggdrasil. Climbing the tree was forbidden until, without reason, a royal decree summoned all adventures to climb its mighty branches in a bid to reach its top.

There are two difficulty options to select as you start the game. Basic is for those of you new to dungeon crawlers, while Advanced is for experienced adventurers who are not afraid of a challenge. If you think you’re really good and select Advanced only to be humbled by what the game throws at you, fear not as you’ll be able to change the difficulty setting in the options menu while you’re in town. 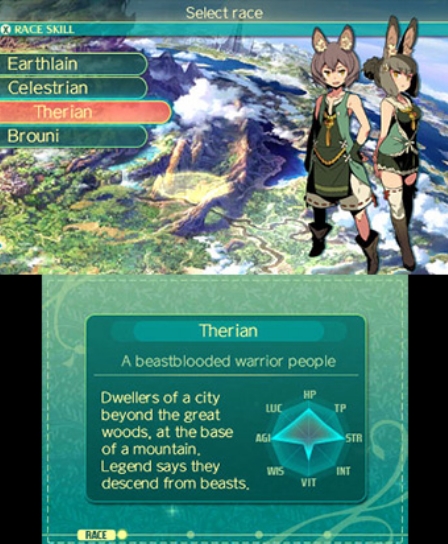 The first thing you’ll need to do is create your party, which will probably take you an hour or two depending on how deep you want to go down the rabbit hole. If you’re an RPG fan, then you’re going to have a lot of fun/frustration creating your RPG party as you try to get a good and balanced group of adventurers. Sure, you can create dozens of characters, but in the end you can only take five with you on this grand adventure.

There are four major races, each with a bigger draw for you to go with the specific classes they offer. You can pick from Earthlains, who make good use of the Fencer, Dragoon, Pugilist and Harbinger classes thanks to their push for HP, Agility, Luck and Vitality, Celestrians who have what it takes to be solid Warlocks and Necromancers with their boost to Wisdom, Intelligence, Luck and TP, Therians who turn into mighty Rover or Masurao with their solid Strength, Agility and HP focus with some Luck and TP boosts thrown in got good measure, and Bruoni, who favor Shamans and Botanists due to their focus on Wisdom, Vitality, Intelligence, TP and a bit of HP and Agility just in case.

The Explorers Guild is your next stop, where you’ll meet Egar, guildmaster of said guild. He’s… not pleased with the so-called adventurers who claim said title while not really being up for adventures and the dangers associated with them, so he’s certainly welcoming of a new face (you) who might have what it takes to form a new guild to take on Yggdrasil. 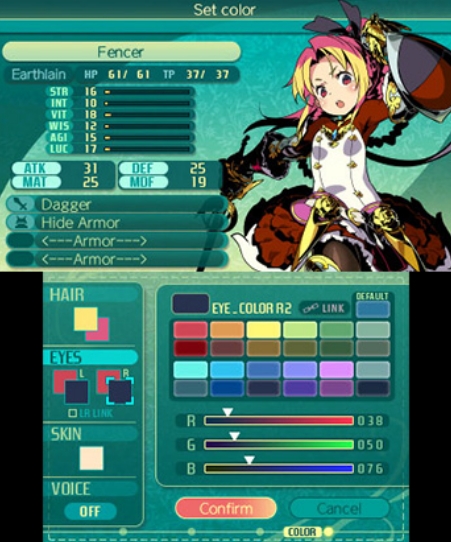 Selecting a race and a class is only the first step, since you then need to select the look of your new character from the available male and female options. Then, you jump into an edit mode for said character’s hair, eye and skin color, as well as his/her voice – oh, and you can click on LR Link in the eyes option and select eyes of a different color for your adventurer. After you find a look and voice that suits a character, you’ll need to pick a name before you can register him/her to your guild. You need at least five to venture onward, but if you want to create one of each class that would probably be a good idea so you can try them all and see what party combination suits your playing style and what is required of you during each run into the dungeon.

Before diving into the game proper, you’ll be prompted to visit the Council Hall where you’ll meet Ramus, royal prince of the Earthlains. The Council Hall is where you’ll get missions for your adventure, and the first one acts as a tutorial of sorts to get you acquainted with the basics – it’s a qualification exam. The first mission asks that you create a map of the 1st floor of Yggdrasil, as well as bring root and soil samples. Easy, right? 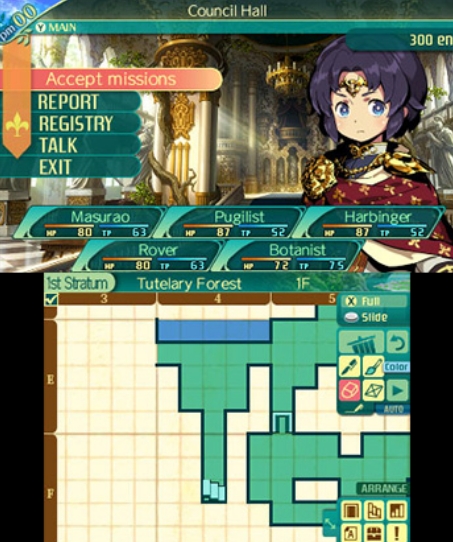 Maps and Etrian Odyssey go hand in hand, and it’s one of the reason’s why the dual-screen nature of the Nintendo 3DS (and of its predecessor), greatly complements this series. As you explore each level of the dungeon you’ll get to draw the map’s floors and walls, as well as marking chests, stairs, doors and other elements in it. There is an option for making it so the game autofills most of the map as you explore, as to not overwhelm people new to the series, but if you want the full experience. You’ll need to carefully mark all relevant info on the map so that you can maximize your progress for every trip into the dungeon.

The next step is to visit the Marketplace to purchase some items for your travels. You’ll meet Syrik, the store’s owner, who will be more than ready to help you find what you need. You can increase the number and types of items on sale by selling to Syrik the materials you find in the labyrinth. The more you sell, the better stuff you’ll have access to, and the more money you’ll have to purchase said items – it’s a solid cycle that will push you to find all items in each floor so that you can unlocke new stuff that will increase your chances of survival.

For a good night’s rest, you should visit Jenetta’s Inn. A rested party js a party that stays alive – at least for longer than a party who goes into the dungeon without fully recovering. Staying at the Inn completely recovers the HP and TP of all party members, including of those who have died. But most importantly, the Inn is where you can save your game. Nothing hurts more than spending hours on the dungeon only to have it all be for nothing because you forgot to save. 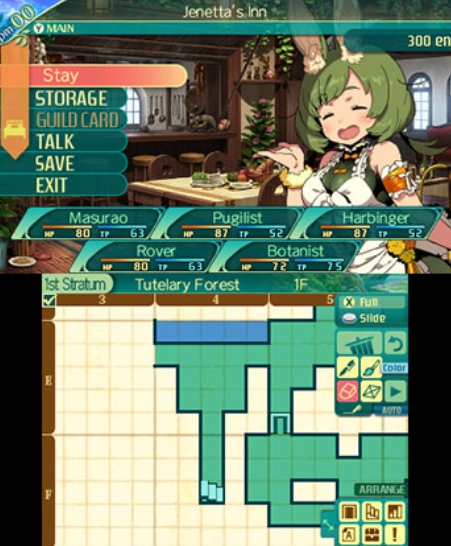 Battle in Etrian Odyssey V will require all of your might, and you’ll need to plan each one as if it was your last one – this is especially true when playing on the Advanced difficulty setting. If you’ve played other RPGs and a dungeon crawler here and there, you probably don’t often use spells or skills that raise your stats – what are known as buffs. Well, guess what? For Etrian Odyssey V you need to make every buff count, not to mention you’ll also need to remove said buffs from your enemies (debuff) so that you can deal more damage and make them less dangerous.

You’ll also need to make sure that your party members are standing in the proper row during battle, or else you might find that your healer is not built for tanking. Your heavy hitters and the characters with a high tolerance for damage should always be in the front row, while spellcaster and long-range attackers need to be in the back row. Your enemies will do the same, keeping long-range attackers and magic users on the back row so that they can deal damage or provide support to the party while staying far away from your Fencer or Pugilist. 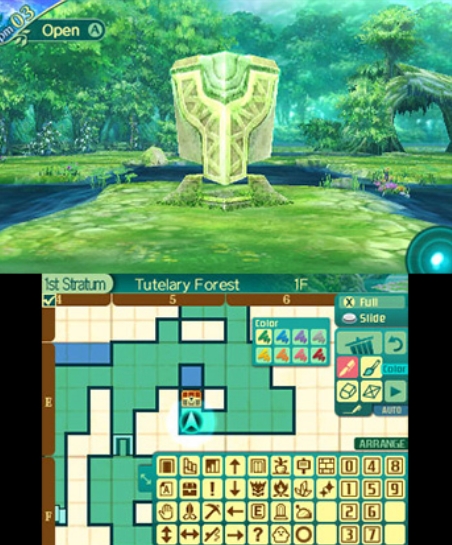 The game also has DLC up for grabs, with more coming soon. You can check the list of all extra content below:

Wizardly Experience Quest ($1.99): Adds a new, repayable quest and an accessory that grants 3x as much EXP gains.

Wizardly Fortune Quest ($1.99): Adds a new, repayable quest and an accessory that raises the enemy drop rate to 100%.

The two DLC packs with the new quests accessories releasing on October 24 are probably what caught your eye since they offer 3x the EXP and 100% drop rate for items from enemies which would certainly be very helpful for your quest. The FM Synth Arranged Sounds DLC is something I look forward to checking out since I loved the similar DLC for Gotta Protectors – DLC that was worth every penny. 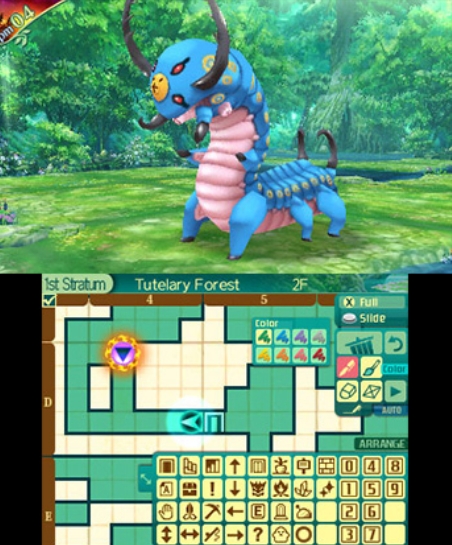 Etrian Odyssey V: Beyond the Myth is a solid entry in the series and one you have to play on Nintendo 3DS. Its gameplay remains as fun as ever, and this fifth entry in the franchise is one of the best games on Nintendo’s portable. If you’re still on the fence then you should definitely check out the free demo for the game since it allows you to get started with access to all characters and classes, and if you decide to buy the game then your progress will transfer – you’ll get to play up to the 3rd floor with a level cap of 10 for your adventurers.

Disclaimer
This Etrian Odyssey V: Beyond the Myth review is based on a Nintendo 3DS copy provided by Atlus.