Zerodiv is giving us Nintendo Switch owners a chance to play Strikers 1945, the 1995 arcade classic, as a new eshop release. Read our Strikers 1945 review to learn more about this fun game!

Strikers 1945 is a vertical arcade shoot ‘em up set in a post-World War II world. A threat of super weapons of unknown origin has surfaced, and it is up to you and your team of elite fighter pilots to finish them before said super weapons are triggered. As you can guess, failing is clearly not an option. If you are a fan of shoot ’em ups that were popular in actual arcade machines back in the day, then Strikers 1945 is a game that will certainly appeal to you.

There are several difficulty levels to choose from, with Monkey being the easiest, going up to Very Hard which, as expected, is the most challenging difficulty setting. I have tried the game on several of its difficulties, and the first two easiest modes don’t really feel any different, but the change from those to the last two hard difficulty modes is night and day. I had expected Very Hard to be absolutely insane, but in truth, I managed to hold my own while playing in it.


No matter what difficulty you choose you will have a variety of planes to choose from, and each one is unique in its own way. You should experiment and play with all of them to see which one suits your playing style since each has three attacks: a regular shot, bombs which can be used to clear the screen from all shots and small enemies, and a charge shot that is stronger but takes a bit to charge up for you to use it. 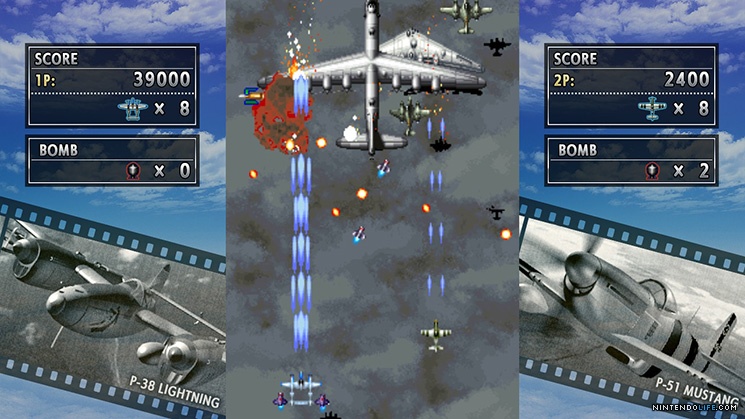 As you can imagine, the aim of the game is to shoot at the hordes of enemy planes in your path as you dodge their shots and try to keep from crashing into them. Power-ups will drop from some of the enemies, and if you grab them, you will increase the power and spread of your regular and charged shots.

The graphics are what you’d expect from an arcade shoot ’em up release from back in 1995, with pixel art up the wazoo. There’s a nice variety in the look and feel of each level, from military installations to colorful natural environments to flying over the ocean. And once you finish a run, the game will start all over again with a considerable bump to the difficulty, and no continues. If you can complete the game a second time in one go, then kudos to you! 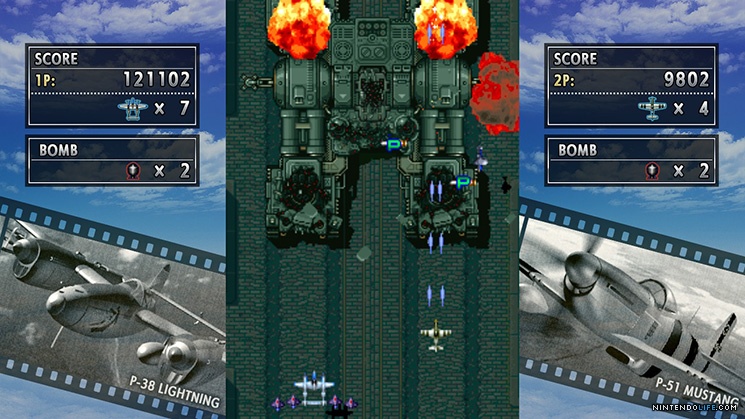 Strikers 1945 is a fun shoot ’em up that Nintendo Switch owners are going to enjoy. There are several graphical options to add filters to the look of the game, not to mention that you can switch the game’s display to be vertical, take your Joy-Con out and place the Switch vertically to play the game just like you could back in the day, with your very own small arcade-style display.

Disclaimer
This Strikers 1945 review is based on a Nintendo Switch code provided by Zerodiv.