After a successful Kickstarter campaign that gave Borealys Games close to 10 times their initial goal, and a release on the Steam platform back in May, Mages of Mystralia is finally available for the PlayStation 4 console.


This is a double review for Mages of Mystralia. The game was played by ThaRaven403 and Ceidz. This review presents what they both had to say.

The story of Mages of Mystralia starts right after you are exiled from your village because you accidentally burned your house down. After traveling to a mage sanctuary, you’ll meet up with Mentor who’ll teach you how to become a mage while also trying to save the Kingdom of Mystralia. Mages of Mystralia is really easy to pick up, since most of the different spells are bound to the Square, Triangle and Circle action buttons, giving you quick access to your arsenal.

The way the story unfolds reminds me a lot of how the excellent Guacamelee did things, in the sense that the main story takes you through all the locations on the map in a fairly linear way, but all the locations contain items or sidequests that might not be accessible right away and will force you to backtrack later in your run. This is what is now known as the Metroidvania style, and if you are going for obtaining all the runes and wands in the game, that will add up to your total playtime.

Speaking of runes, let me tell you about the combat system. You basically have four spells, but they can all evolve in a wide range of possibilities depending on the runes you attach to them. For example, when you get your fire spell, at first all you can do is make a fireball spawn, but it just stays there. Great for lighting a fireplace, not so much for fighting goblins. You later find the Move rune which, if attached to your fire spell, changes it to a flying fireball! With more than 20 runes to find, you can imagine the large variety of combinations that you can try to either help you defeat enemies or solve the different puzzles that await on your quest. 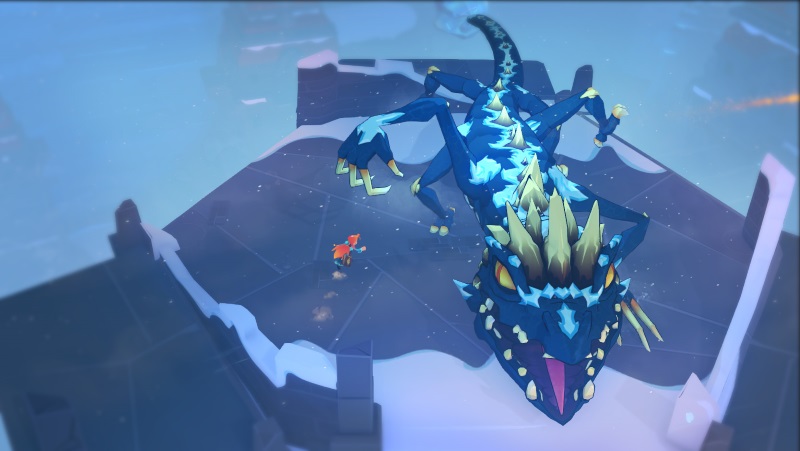 As a big fan of action/adventure games, and an even bigger fan of Metroidvania games, Mages of Mystralia was really satisfying for me. The combat is fun, with bosses having specific weaknesses that must be discovered to beat them, and the different puzzles that you have to solve are just challenging enough for the game to be enjoyable without being frustrating.

Before even looking at the trophy list, I knew I’d be going for the 100% completion of the game which requires you to find all the runes, wands and chests in each of the different areas. And after looking at the list, I knew I’d be going for that shiny Platinum trophy. The list is fairly straightforward, with the majority of the trophies being unlocked if you go for that 100%, so it shouldn’t pose that much of a challenge to you.

As stated before, Zia starts her adventure on a bad note, but she luckily learns to harness her power, and this is how her journey begins. The better you do in the many quests you’ll be given, the more recognition you’ll gain from the villagers, and that can only be a good thing, right?

The difficulty was fair for the most part, and I found myself quite comfortable in the easiest one, but if you’re up for the challenge, you can try Archmage Mode (the hardest difficulty setting) in which you’ll require a bit more strategy if you want to stay alive. I liked the different bosses encountered through the campaign which requires you to think a little before going all-in so you can understand how to affect them! Once you figure how to destroy them, each boss provides a fun challenge until the end.

Since ThaRaven403 already mentioned the gameplay, I wanted to cover the presentation. The art style is very beautiful and polished and my wife, who was watching me play for most of the campaign, said more than once that the locations were great to look at. The soundtrack was also moody, and I liked most of the themes that played during my adventure.

Final Thoughts
If you’re a fan of adventure and/or Metroidvania games, you’ll definitely have a good time with Mages of Mystralia. Trying to complete it will take you around 15-20 hours which is quite a decent time for an indie release. We really liked the way the game handles upgrades and opening up new skills for you to use, and we’re sure you’ enjoy it as well.

Disclaimer
This Mages of Mystralia review is based on PS4 copies provided by Borealys Games.