[PS4] Dragon Quest Heroes: The World Tree’s Woe and the Blight Below Review


The game has taken a page out of the Dynasty Warriors book which is why, instead of random battles with small groups of enemies, you’ll be fighting massive hordes of monsters on the fields, in castles and dungeons. Everywhere you turn, there are thousands of unwanted guests waiting to end your life! But fear not, because even though this is an action release, you’ll still get to interact with many RPG elements. For example, you’ll have access to a skill tree in which you can upgrade your characters’ skills and stats!

The story kicks off in Arba where humanity and monsters used to co-exist in harmony. All that changed when the monsters started to go crazy and attacked the other inhabitants, including poor Healix. Healix is the only friendly monster you’ll run into, so it’s up to protagonists Aurora and Luceus to join forces with King Doric to once again bring peace to the land. 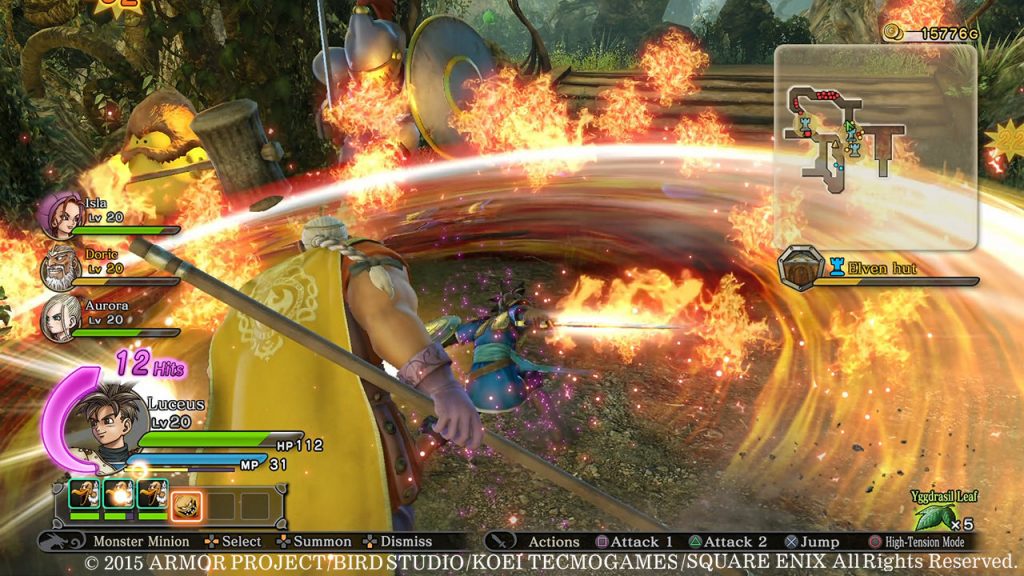 Dragon Quest Heroes features several playable characters. As I mentioned before, the protagonists are Luceus and Aurora, and you can choose which character to play as once you boot up the game. Luceus is a captain of the Royal Guard of Arba, a loyal servant in King Doric’s army who is very meticulous when it comes to strategies – he always has a plan. Aurora is also a captain in King Doric’s Army, but she is very brash and will jump into battle without a second thought – she will do whatever it takes to protect the kingdom. King Doric, unlike most Kings, is very much a hands-on monarch, and he will fight alongside Luceus and Aurora to help them save the kingdom from the monsters.

Then there’s Isla who has quite a feisty attitude, she is very clever and doesn’t miss an opportunity when it comes to research. Some of you may recognize Maya from Dragon Quest IV: Chapters of the Chosen. Her only focus is to find true happiness by getting rich! Tsarevna Alena is a princess who is also a proficient in martial arts and is a bubbly character who dives in head first into battle, much to the dismay of Kiryl, her protector. Let’s not forget about Bianca from Dragon Quest V: Hand of the Heavenly Bride. She has a heart of gold and sees her current situation as an adventure of a life time. Like Bianca, Nera is a character from The Hand of the Heavenly Bride. She is a polite and thoughtful person, and nothing is ever a problem for her. 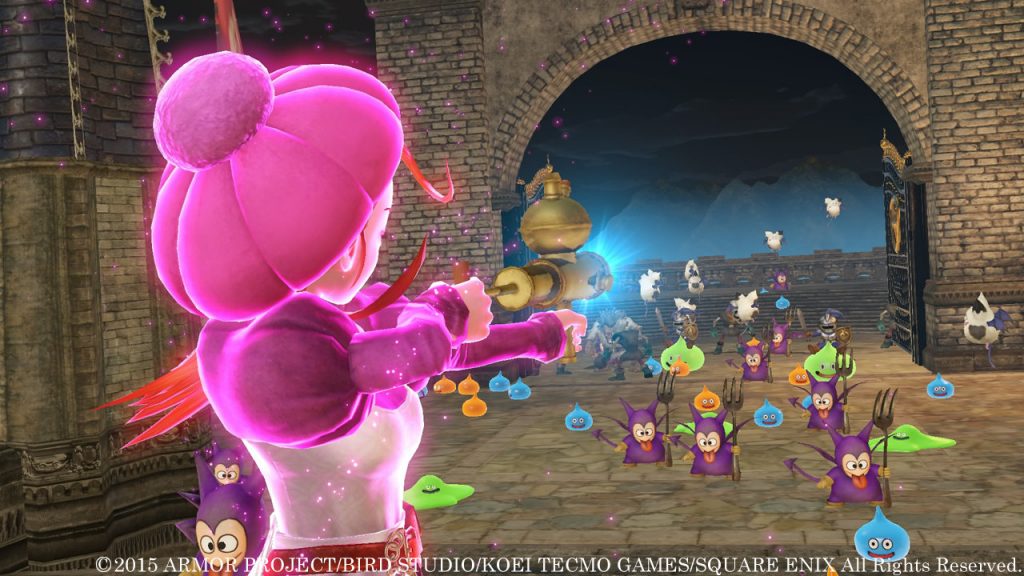 Another one is Terry from Dragon Quest VI: Realms of Reverie. He is a lad with a serious attitude and trust issues – he is definitely not one to be messed with. Yangus and Jessica are from Dragon Quest VIII: Journey of the Cursed King. Yangus is a man who only ever thinks of treasure and who adores Healix. Jessica is of noble birth and has a bit of a rebellious streak in her, but her magic skills are nothing short of amazing! Healix is not a playable character, but does work in a support capacity as a healer; he is an adorable young blue slime who swears his crown is real and not a fake. There are other characters you’ll get to play as, but I’ll let you find out about them on your own!

Dragon Quest Heroes has an interesting feature in monster recruitment by way of monster medals. After defeating a set number for each monster type, you’ll get to recruit one to fight alongside you. There are two types of monster medals: gold monster medals are sentries, and the silver monster medals are saviors, and saviors are generally more powerful than sentries. Monster recruiting will become an essential gameplay mechanic as you will have stages that are a bit like tower defense where you have to protect innocent people or the Yggdrasil roots from massive hordes of monsters, which is why deploying monster medals will be very handy and sorta needed to be able to win these battles. 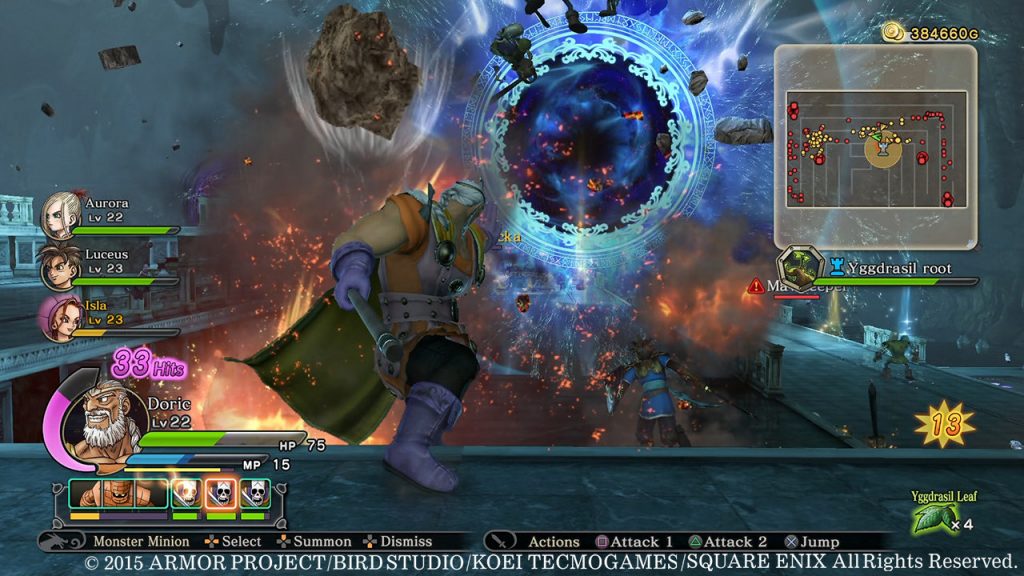 Along with the story related challenges, there is lots of optional stuff to do like the challenges that will have you grinding for levels and for the number of monsters you’ve killed. On top of this there are over 100 side-quests you can take on, and completing these will allow you to earn some pretty amazing rewards, so they are definitely worth doing.

Mini medal collecting has been a huge part of the Dragon Quest series for a while now, so of course, it is part of Dragon Quest Heroes! You can get them from winning accolades (42 in total to collect) and from monster suppression (optional grinding challenges), and you can even get a mini medal or two from completing quests! There is a trophy for obtaining 500 mini medals, which does sound like a lot, if you do things right you’ll get there eventually as you aim at getting all other trophies. 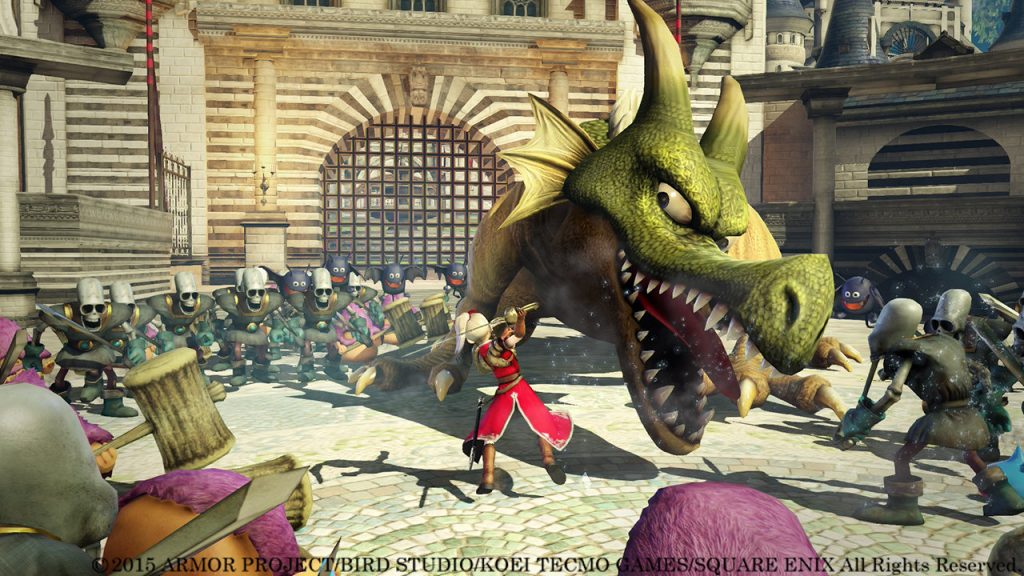 Each character has his/her own skill tree to develop, and even though you can only have four characters in your party, those you leave behind at the base can still earn XP – just but not as much as the main party members! This is why it is important to swap your characters every now and then so that you can make sure they all level up evenly, as well as to give them a chance to earn skill points so that you can use them in their respective skill tree. Each tree consists of spells, abilities, attributes, special effects, and character specific skills, and to unlock all of them you’ll need to spend a ton of skill points.

Crafting in this game is very simple and fun. You will need to find crafting recipes, which can be obtained from treasure chests or dropped by the monsters you defeat, and you can even buy them from the mini medal shop. Sometimes those who give you a quest will also give you a recipe as part of your rewards. I do want to mention that if you want to get everything in the game, you shouldn’t sell anything since it might be an item you need to craft other stuff. You can sell gold nuggets and silver bars as they are not needed for crafting, but do keep everything else. Don’t worry since your inventory will grow as you progress in the game. 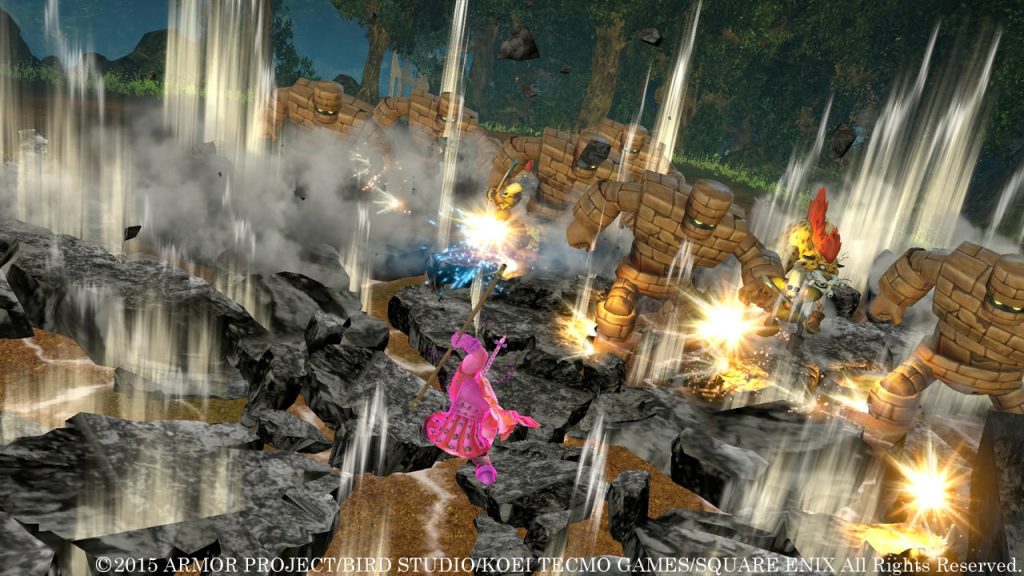 Dragon Quest Heroes: The World Tree’s Woe and the Blight Below is a very addictive game. While it is a bit repetitive due to the nature of its gameplay, it never stops being fun. I definitely recommend giving this a go since I’m sure you’ll have fun with this nice twist on the formula. And if you like it, be sure to pick up its sequel as well!

DRAGON QUEST HEROES®: The World Tree's Woe and the Blight Below
0 comment
0
FacebookTwitterEmail