Kid Tripp from Four Horses is an autorunner where you must run, jump and throw stones to survive from one-hit deaths. Learn more in our Kid Tripp review!


You play as the titular Kid Tripp who finds himself trapped on an island in which everything is out to get him. He ends up on this island when the plane he’s flying in crashed into a giraffe. Really. This forces him to quickly travel through each area non-stop in levels that take roughly 30 seconds or so to be completed. 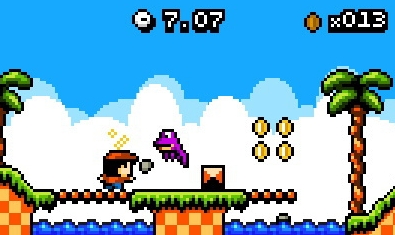 You’ll need to pay attention to each level’s layout as you run and jump from Point A to Point B, or else you’ll be dead in a flash. A single hit is all it takes to kill you, so you need to be very careful of all the snakes, fish, frogs, monkeys, bats and other creatures in your path. Most enemies can be defeated by jumping on top of them, but there are some that will kill you if you do that. On top of this, you need to pay attention to the movement and jump patterns of critters as well as how they’re spaced so that you can act accordingly and avoid being hit.

As for the game’s controls, they vary a bit between the three available modes. The D-Pad and the Analog stick are used to activate the opposite of two modes, depending on which one you’ve activated. If in Walking Mode, the D-Pad and the analog stick will trigger Running mode, and vice-versa. The third one is Hardcore Mode, in which you can’t switch between walking or running with the D-Pad or the analog stick. Along with this, you can jump with the A, Y or L buttons and throw a stone with the B, X or R button – any button in this last set can be held down to run when playing in Hardcore Mode. That stone throwing part gives the game a bit of an Adventure Island vibe. 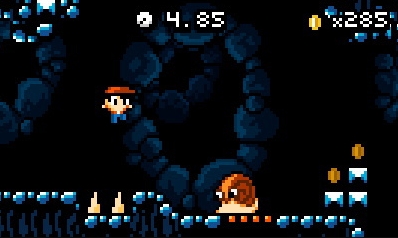 The game includes a set of fourteen challenges to complete. These range from completing each if the game’s worlds, and finishing the game itself, to things such as falling into the water and surviving, holding 1,000 coins at once, earning a gold medal at every level, or completing the game without using a continue.

Kid Tripp is a very fun release on Nintendo 3DS. Its autorunner nature might sub some people the wrong way, but the fact that each of its levels has been handcrafted instead of being procedurally generated makes a big difference. Trial and error will allow you to learn a level’s layout little by little as you die from all the enemies and hazards on your path, allowing you to get better as you go. The game is very entertaining on 3DS and should be just as fun on the Nintendo Switch when it releases later in the year. 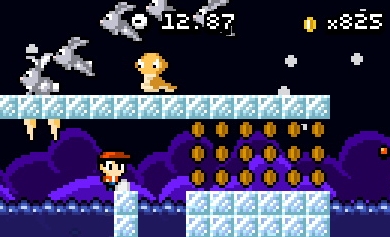 Disclaimer
This Kid Tripp review is based on a Nintendo 3DS copy provided by Four Horses.