This is a double review for Warlocks Vs. Shadows. The game was played by EdEN and Ceidz. This review presents what they both had to say.

Back when the team at One More Level took to Kickstarter, the game was known only as Warlocks. After a long time in development, it released on Steam last year in August and now, after skipping a promised Wii U port, the game is out on PS4. This one is described as being a 2D action RPG/brawler in a fantasy setting invaded by shadows. They came in meteors, traveling from the Shadow World, with the goal of conquering the planet where they land.

There’s certainly a lot of content to enjoy, either in single player, or co-op. Story Mode is the main mode for the game, and it offers both single player and local multiplayer. After selecting single player, I had the option of playing as one of the six unlocked warriors, with five more still locked. The options were Rainer The Guardian, Jake The Pyromancer, Anya The Ice Mistress, Borubar The Bugbear Warrior, Kheera The Shamaness, and Zardonic The Bass Wizard. Every character has its own level and stats, so you’ll need to play with each of them to improve their skills. 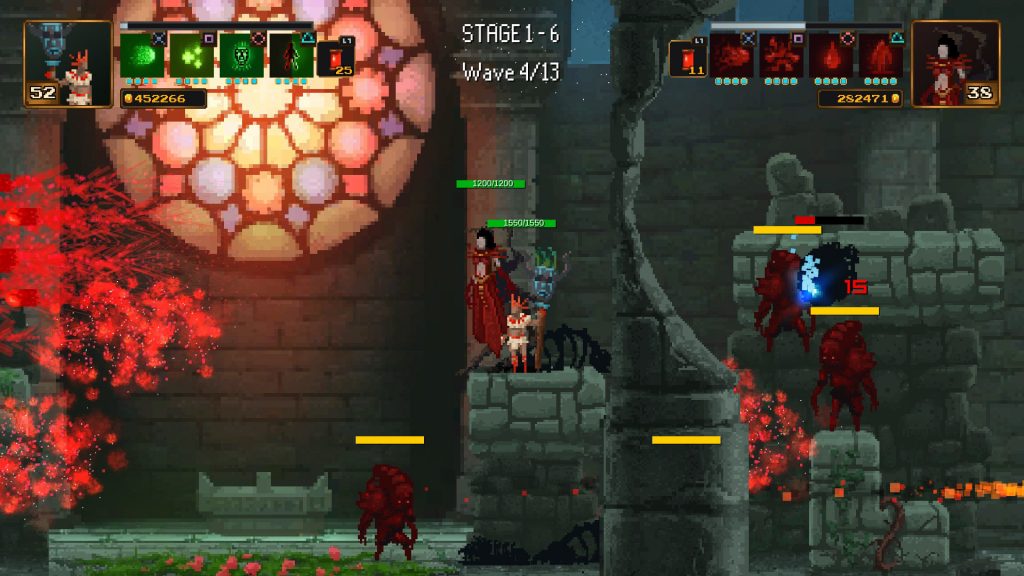 The game then brought me into the tutorial zone where I got to learn the basics. Jumping is assigned to the up direction on the D-Pad or the analog stick, while the X button is for melee attacks. After hitting and enemy with a melee attack, you can quickly press the Circle button to do a follow-up attack while a special mark looms over the enemy. I was then able to press the Square button to cast a protective barrier around me. The final attack was with the Triangle button to launch a shock wave that pushed enemies away. By hitting the touch pad, you can access your equipment and stats menu to check the loot you’ve collected and equip said items as needed – not to mention to review your health points(HP), HP regen, armor, damage bonus, life steal, etc.

At the end of the tutorial stage, there is a portal that takes you into Chapter I, where your adventure will begin on the planet Folara, in the Greenlands. This is a wooden area with a temple right in the middle, making it the perfect area to test your might. The game places you in a small area and then sends a set number of waves of enemies you need to destroy before you can move on to the next area. As you destroy them you will gain coins as well as experience points to level up, not to mention some loot here and there. 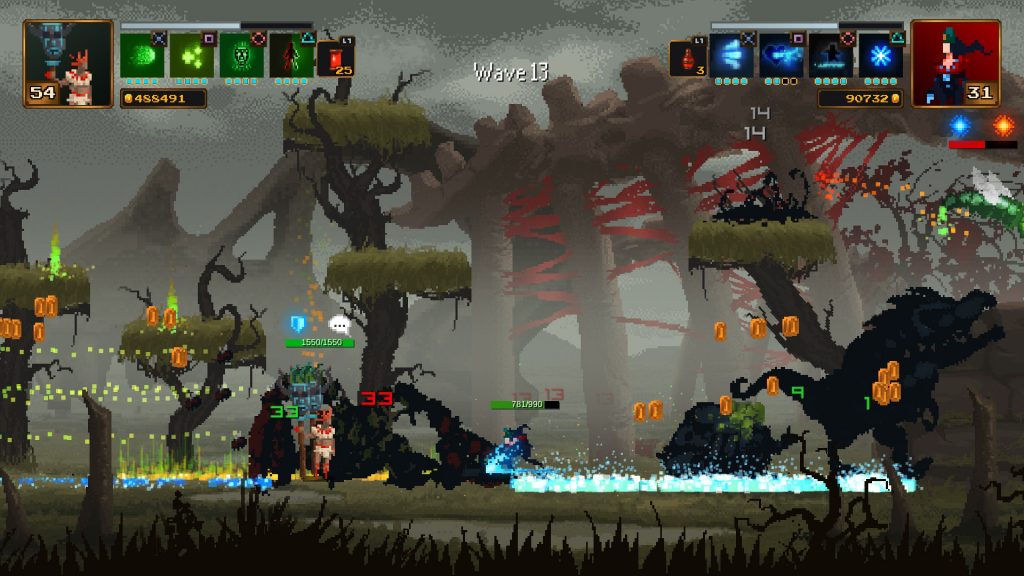 If you are killed, you will get a splash screen showing you the number of monsters you killed, while it asks you to hit a button to restart the level. The good thing is that you get to keep all your gold and experience points, so even if you’re at first you’re not very good at the game, every bit you play will allow you to improve your character so that you can grow stronger and have an easier time beating the Shadows. Something you need to keep in mind is that when enemies spawn into the area, their HP bars will be white. This means that they’re invincible to your attacks, until the bar changes to a red color. This was probably implemented so that players don’t try to defeat enemies the second they spawn into play.

Picking up from where EdEN left off, something that is very important is upgrading your skills! As you level up you will be able to improve your skills, and this is done by holding down the L2 button to then press the button that corresponds to the skill you want to improve – X, Square, Circle or Triangle. I suggest you improve skills between areas of the stage so that you’re not overwhelmed by the enemies that spawn to attack you.

After completing a couple of stages in each world, you’ll be able to spend your hard-earned money with a merchant that will casually materialize out of thin air. You can enter the trade screen to sell any of the items you have that you don’t want (which should be a lot since there’s plenty of loot to find!) as well as what the merchant has to offer. You can click on what you want to sell and click on what you want to buy, and then confirm the trade with the Triangle button. This speeds things up since you can take care of selling items and buying items in a single transaction. 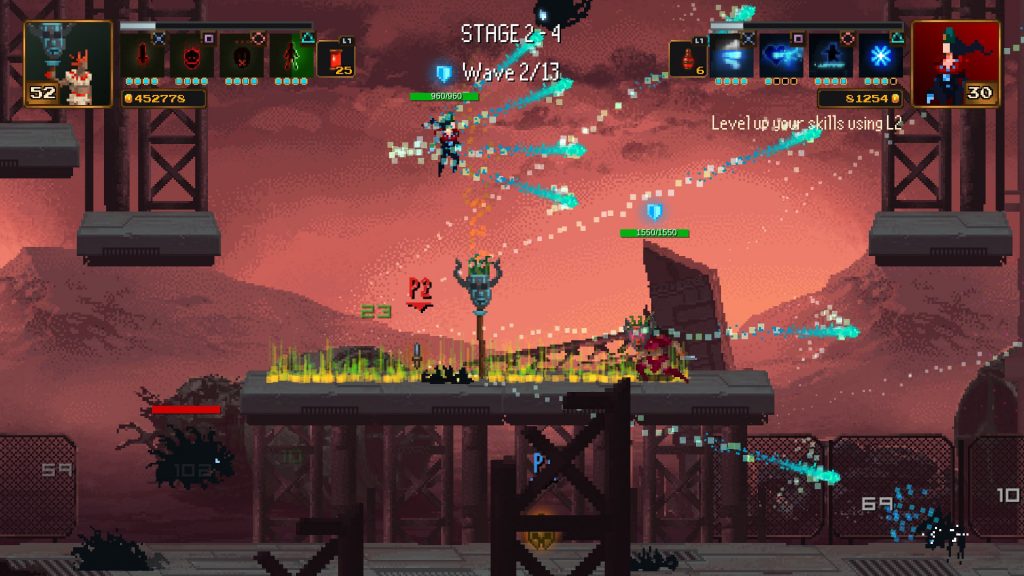 For Versus Mode, you can play in Deathmatch or Test Your Luck. This one feels a bit like, say, playing a few rounds of Super Smash Bros. since it’s a free-for-all multiplayer mode where you do your best to be the lat one standing. Finally, Horde Mode is sort of an endless mode in which you battle in the available arenas as you try to defeat an onslaught of shadow monsters. You’ll be able to use what you’ve learned from the main Story Mode and Versus Mode as you try to see if you’re really as good as you think you are.

Something that EdEN didn’t mention but which I noticed as I played is that each character you play as not only has its own inventory, level, and stats, but also its own progress! That means that as you progress in the game that progress will be saved to the character you used to get there. It does make sense since otherwise you’d be killed in a couple of seconds if you went into a later stage with a Level 1 character! 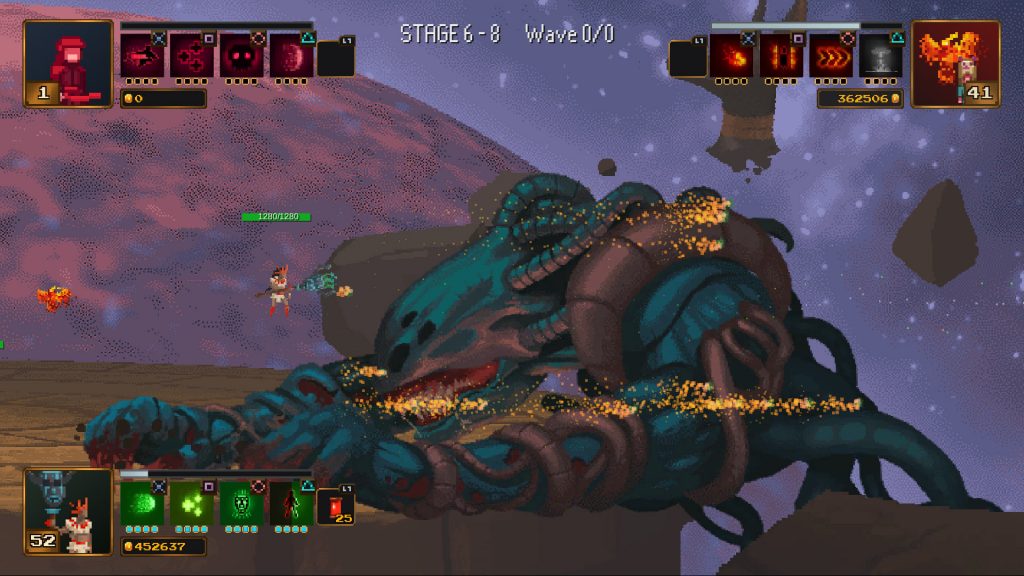 As is usually the case for most indie release, the game features a list full of nothing but Bronze trophies. They are awarded for completing the tutorial, defeating each of the bosses in the game, casting X number of spells, dealing X amount of damage, opening every chest in the game and playing as every Warlock in Versus Mode. It’s not a hard list, but it is a grindy one. 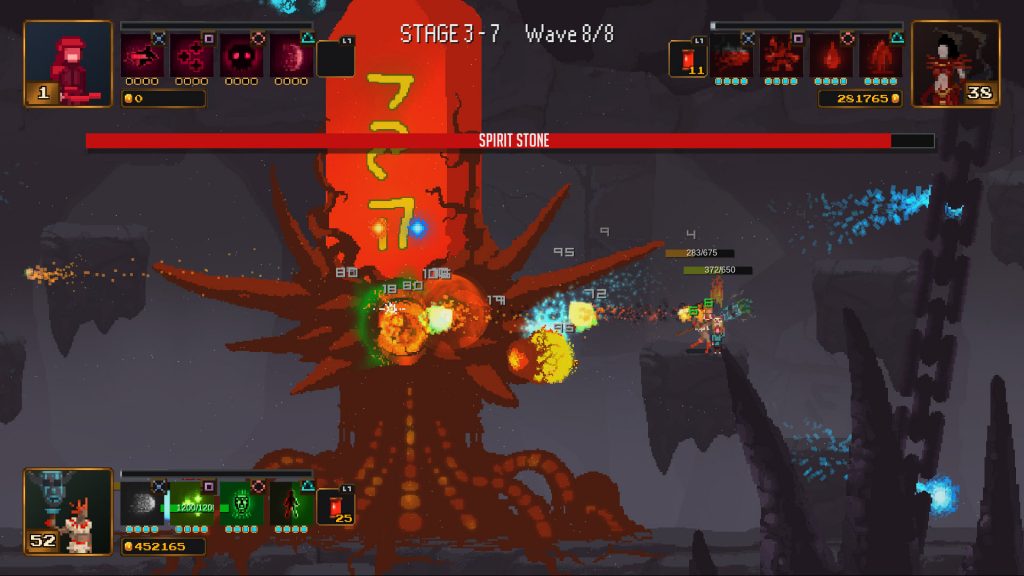 We both had fun with Warlocks vs. Shadows. After playing the game for a while, trying the characters, leveling up and improving their skills, we still came back for more. Some of you might feel it’s a bit repetitive, but the overall enemy variety, leveling up system and looting system make for a fun 2D experience.

Disclaimer
This Warlocks vs. Shadows review is based on a PS4 copy provided by Teyon.

Tooth and Tail Out On PS4 This September