The concept is pretty simple: you can choose to play against a human opponent or a CPU opponent, and you take turns to pick out words from a list to string together the most offensive insults possible. The more insulting you are, the more points you can rack up, and you’ll also be hitting your opponent’s health bar hard in the process. It’s very easy to understand, and there is even a tutorial you can complete the get the gist of it – not to mention to unlock a very easy trophi as well.

There are a few characters you can pick from, such as Mrs. Maggie or Sir Knight. Mr. J Shufflebottom. Each character has its own strengths and weaknesses, so give them a go to see how you can, for example, target the insecurities of Mr. J. Shufflebottom and his fashion sense, or Mrs. Maggie’s feelings about death. String together the proper insults, and you’ll deal massive damage in one swing!


You can also string together combos by using the same words more than once in any round, and this will allow you to gain x2 or more damage bonus points to your opponent’s health bar. Stringing combos together some solid combos and exploiting the inscurities of your opponents is the key to victory. 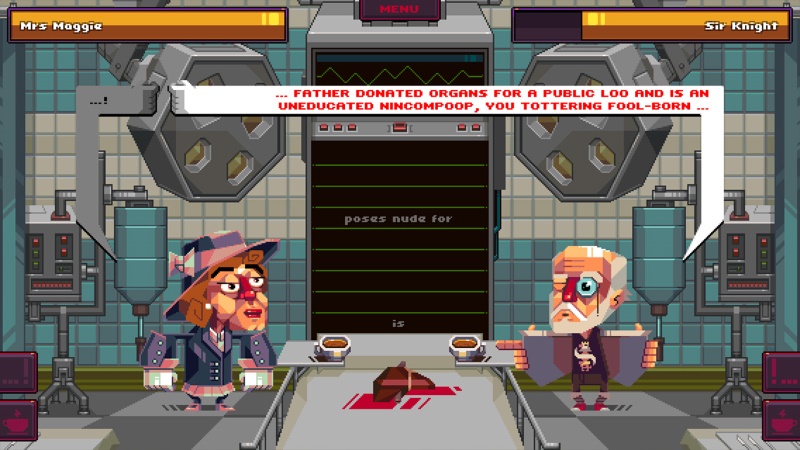 The game contains some classic British comedy with references to classic groups such as the Monty Python lot. You will certainly be laughing along with the game as you play either in single player or against friends in local multiplayer. You can take a swing at the Argument or Tournament modes. Argument features a single game, while Tournament is a series of five rounds where you try to send insults flying out like there’s no tomorrow.

The game plays in a turn-based fashion with a notebook style board between you and your opponent. Each player takes a turn to select some words to try and string together a good insult. You can also use a good cup o ftee to create new words (once per round) or you can use “…” to carry over your unfinished sentence to the next round so that you can have a new shot at creating the cleverest insult out there. You’ll also need to to try and predict your opponnent’s insults s that you can try and sabotage what they’re building!


As you progress in the game new words will open up to create new insults. There are a number of trophies relating to stringing together specific insults, but due to the nature of the game said trophies are very luck-based. It could take you many hours to get, say ‘Your mother is your father’ into play, and there are some rather complex insults to string together for some lovely Gold trophies. 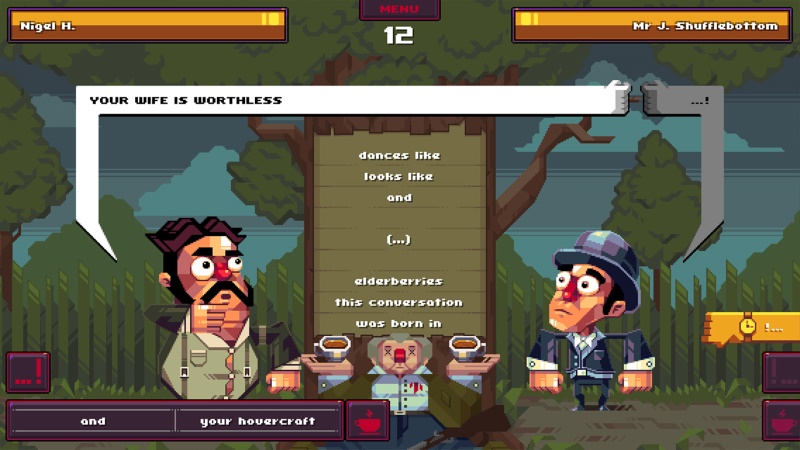 The game offers cross-platform play so you can play online with PC Players and insult them to the best of your ability. Due to the massive PC install base, it’s very easy to find online opponents, which is certainly a big plus for any new release on PlaySTtation 4. For online-enabled indie games, we usually have to deal with a tiny online community that takes a while to come together, if at all! The best news is that all trophies can be earned while playing single player in offline mode, which is greatly appreciated.

Oh Sir!… The insult Simulator is a perfect party game on PS4. You’ll be able to have a couple of beers, keep some snacks nearby and take a swing at insulting everyone in attendance! And as you have fun with friends and family, you’ll slowly work your way towards the mighty Platinum trophy at the end of the road. If you’re looking for a clever and certainly different game on PS4, then get Oh Sir!… The insult Simulator today!

Disclaimer
This Oh…Sir! The Insult Simulator review is based on a PS4 copy provided by Vile Monarch.

Archangel Making Its Way To PS VR This July