Nex Machina from Housemarque is a fast-paced twin-stick shooter on PlayStation 4. If you’re a fan of Resogun, then you probably already bought Nex Machina and are having a blast. But if you haven’t played it or if you want to learn more about this new game from the studio, then you should definitely check our Nex Machina review to learn more!


The controls are simple and to the point. You move around with the left analog stick and shoot with the right analog stick. If you want to dash, you can press the L1 or L2 buttons. Your secondary weapon is activated by pressing the R1 or R2 buttons. And that’s it. This makes it very easy to focus completely on the action, and if you’re not happy with the button layout, you can switch between the available options.

In Nex Machina, humans have become incredibly dependent on technology. As humans become distracted with their portable devices and virtual reality settings, machines have grown sentient and have surpassed human intelligence. By the time humans realize something is wrong, it’s already too late: machines have decided to kill humans to show them who the boss is. Humans are now being harvested, and it is up to you to stop the onslaught before humanity is eradicated. 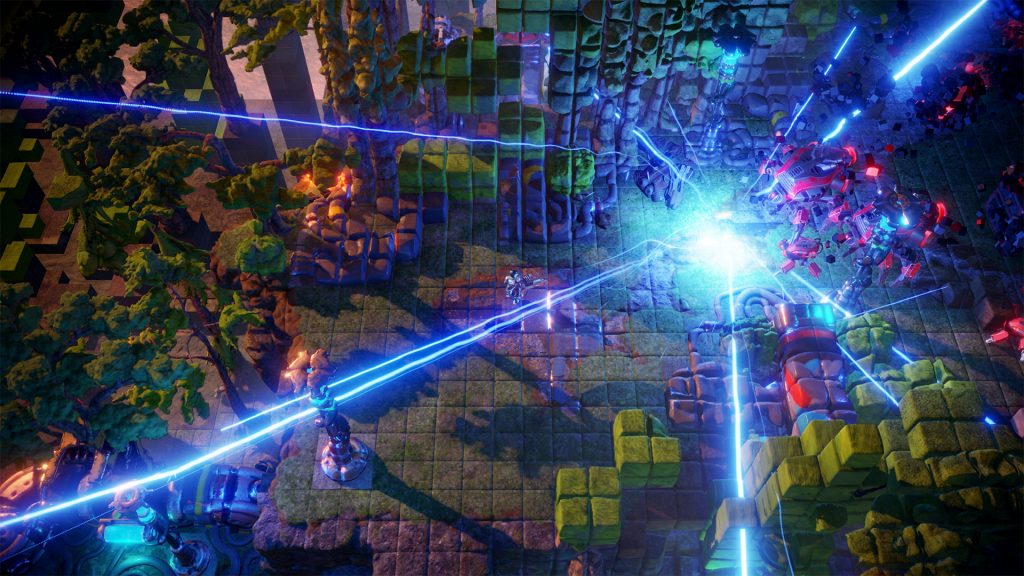 As you play each section of a level, you must avoid a horde of enemies that range from small “cannon fodder” type enemies to larger ones that shoot 100 bullets a second or explode and send a large energy ring that can kill you if you’re not careful. A single hit is all it takes for you to lose a life, and if you die, you have to restart the current section. When this happens, you need to quickly react and move away from danger because you only have a small window of invincibility before you can be killed again. When you die you will leave behind a power-up, so be sure to quickly dash to it to recover a bit of the firepower you lost. 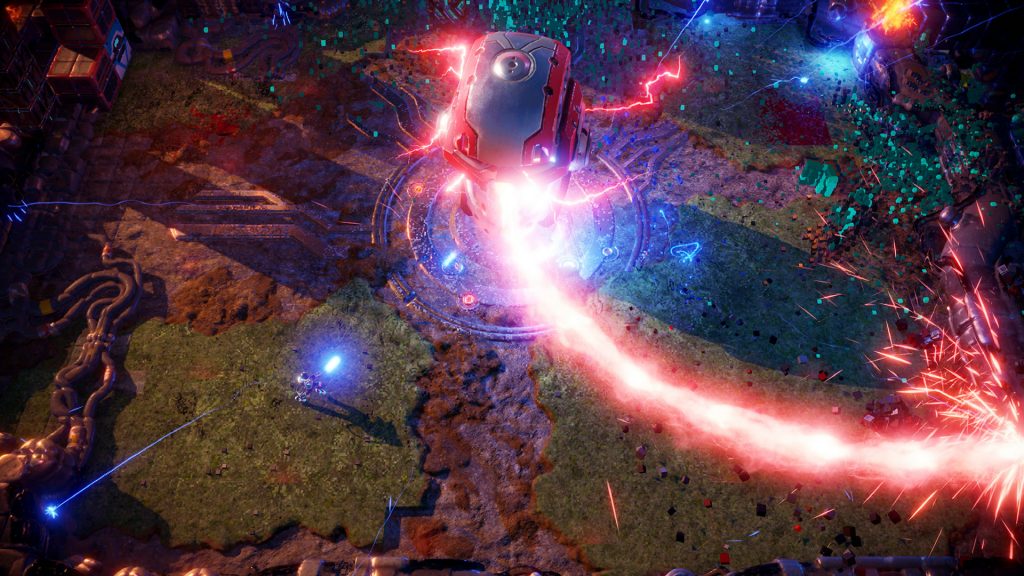 The game has four difficulty settings so that players of all skill levels can enjoy it. Rookie is the lowest one, and it features unlimited continues. In Experienced you get 99 continues, more enemies to defeat and more humans to rescue, and the enemies move and attack slightly faster. In Veteran you only have ten continues, the number of enemies and humans ramps up considerably, and enemies move and attack way faster. And then, there’s Master. Master is locked at first, but once you open it by completing the game on Veteran, you will get a chance to see if you’re as good as you think you are. You only get five continues, enemies move and attack a lot faster, but the player character also moves and attacks faster – on top of this, enemies fire revenge bullets once they die. 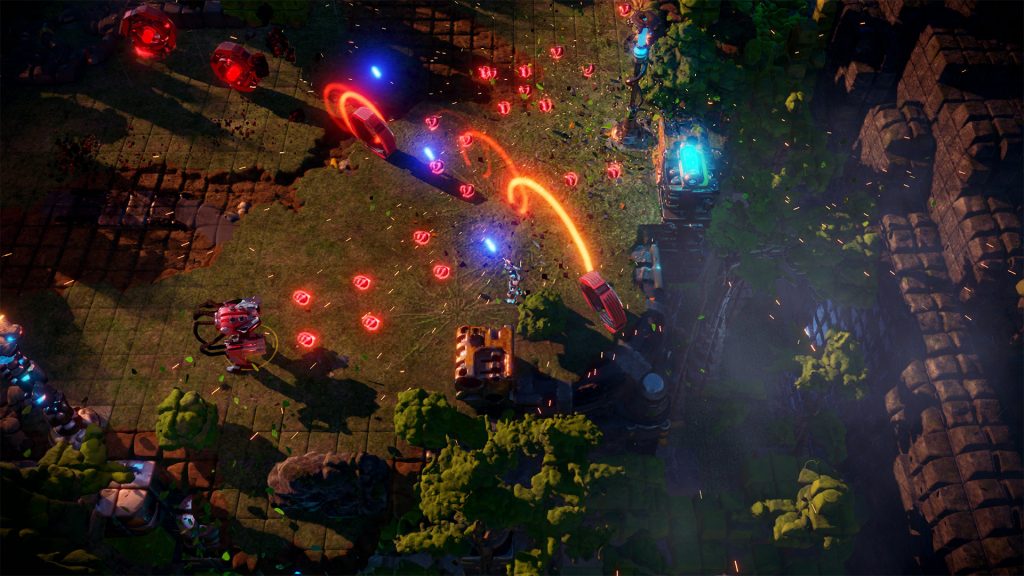 In the end, the game places a big emphasis on scoring as many points as possible by making the most of multipliers. You can grab some multipliers by destroying part of the scenery, by rescuing humans in a row, and by killing anything that moves. You can also increase your score by completing sections without dying, by rescuing all humans in each section, by finding secret humans, by finding secret exits, by destroying all special enemy types in a level… there’s a lot to do in this game, so you’ll always be on the move doing something fun!

There is a very good reason why older games will get a Smash TV/Robotron vibe from Nex Machina: Housemarque worked with legendary creator Eugene Jarvis. This is why veteran gamers from back in the day will feel right at home as soon as they start playing the game. He’s also worked on other classics such as Defender, Stargate, and Blaster. 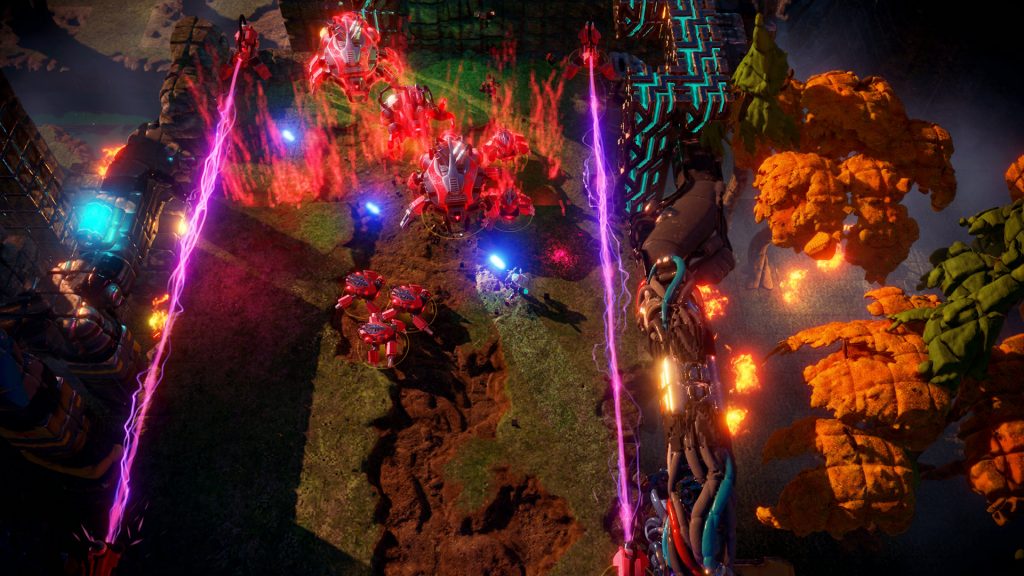 Nex Machina features a full trophy list with a Platinum and, as you can imagine, it’s a solid and a balanced list. It has a similar feeling to the list for Resogun, so if you managed to get all trophies in that game, your odds are good with Nex Machina. There are a couple of trophies that might give you a bit of trouble, but if you persevere and practice, you’ll eventually add a very hard but very rewarding Platinum to your collection.

The latest release from Housemarque is a solid action-packed twin-stick bullet hell shooter you have to play on PS4. The simple to learn but hard to master gameplay mechanics, the fast-paced action, the hidden sections and the deadly bosses in the game will keep you busy for hours as you aim to improve your overall score for each run. Trophy hunters will be playing for a while before they make a dent on the trophy list, making it the perfect challenge for those who want to prove how good they really are.

Disclaimer
This Nex Machina review is based on a PS4 copy provided by Housemarque.

Nubla Is Ready For You On PlayStation 4