Kick up some dust as you drive a menagerie of vehicles through different terrains and try to become the Rally Champion! Are you ready for some fast-paced action? Then check out our DiRT 4 review!

The world’s leading off-road racing series is back! DiRT 4 puts you at the wheel of the most powerful machines ever made as you face the toughest roads and circuits on the planet in rally, rallycross & landrush.

Revolutionary ‘Your Stage’ technology gives you millions of rally routes at the touch of a button in Australia, Spain, Michigan, Sweden & Wales.

Drive over 50 of the most iconic rally vehicles ever made from the history of the sport.

Hone your skills at the DiRT Academy and then make it your ultimate playground.

Create your own driver and build a team around you to take on the world of off-road racing.

RaceNet takes competitive gaming to the next level pitting you against the best in the world as you battle for prizes.

DiRT 4 takes you into the world of off-terrain racing as you compete to become rally champion. The game has tons of different modes as you explore what it has to offer. It’s been awhile since I’d played a racing title, so I was legitimately looking forward to jumping into this game and getting my feet dirty. Most of the time I prefer a more arcade feel to my racing vs. the more serious simulation mode. DiRT 4 somehow found a way to keep everyone happy.

As you start playing the game introduces you to the gameplay mechanics through a tutorial. It gives you an idea of how rally racing works as it is certainly different from traditional racing titles. The game then cleverly finds out if you tend to side more towards the full sim or of you favor an arcade style racing experience, and then helps you select the right difficulty level for you. You can change this at any point if you think you’re up for the challenge – the game even rewards you to up the difficulty as you play Career Mode.

Let’s talk about some of the modes and races in the game. Rally is simple and to the point: you race down a path and try to get the best time. There are no other cars on your way, so you only have yourself to blame if you make a mistake. You have no map for the course but there is someone piping you info about the upcoming turns, and you need to listen. She will tell you whether to go left or right and give you a number for the degree of the turn – 6 being the lowest and 1 being the most. If you hear Right 4, it will be a medium turn, but if you hear left 6 it’s a slight bend in the road. She will also tell you about upcoming dips or bumps in elevation and water on the course. 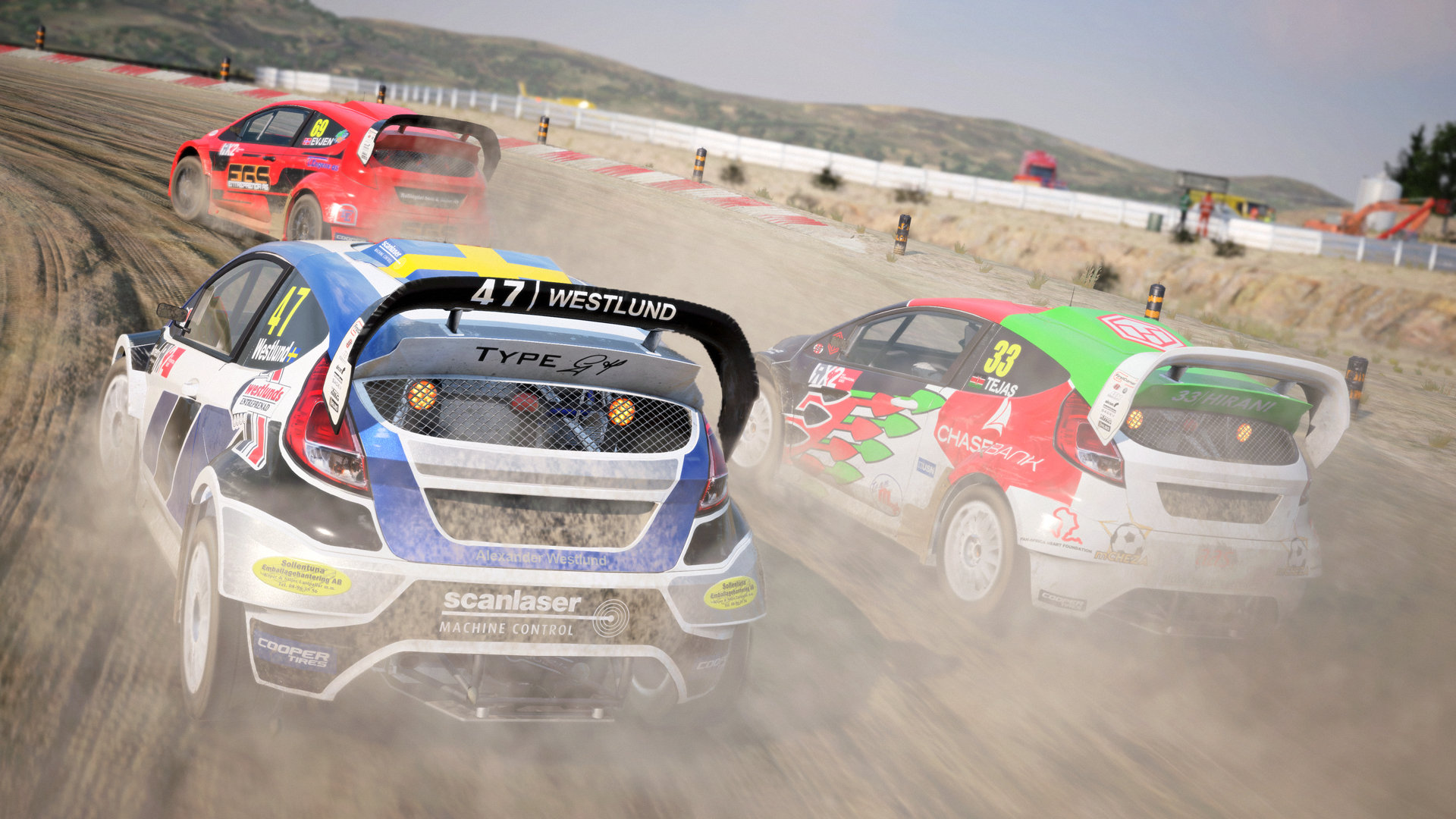 The weather plays a key role in this as well. When it’s clear it’s hunky dory, but when you have to race with rain, snow or fog, the way you approach a race changes considerably. Listening to your navigator becomes even more important since your visibility will decrease, and ignoring the navigator will be the fastest way for you to end your run.

Next up in Career is Landrush which puts you up against other competitors in smaller dirt based arenas. Instead of using the rally cars this mode focuses on trucks and buggies as you try to get first place. The game takes a completely different flavor as it’s now you against AI as you try to get the top position in each race. The cars feel different, especially the buggies which have a considerable learning curve. I really liked this mode and what it had to offer.

Rally Cross was next, taking the original Rally mode and adding a more circuit-based feel as you compete against everyone else. This mode can really test your resolve as the tracks aren’t always clearly laid, which can get especially confusing when you are out in the lead. You need to pay attention. It also adds a joker lap which you need to take once per race. It’s usually a slight deviation from the regular course, and you can choose when is your best opportunity to take it. The mode can also see you taking time penalties for cutting corners, when not appropriate. It definitely happened to me a few times unintentionally taking my first place finish to being out due to the time penalty. 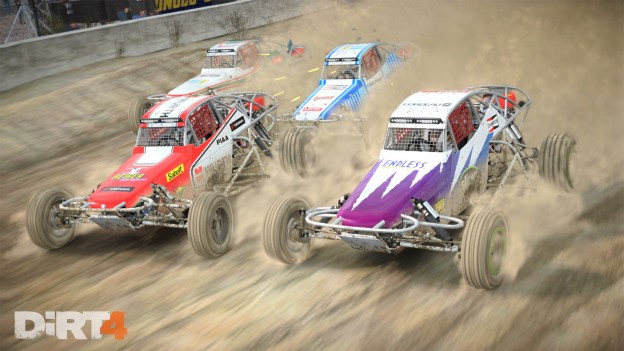 Finally, there is a Career Mode which uses Rally mode with historical cars which made the game feel new! Weird, right? It’s really cool how it uses a great variety of other cars and how each one feels different in terms of speed and handling. This one was also very entertaining and rounded up the release nicely.

The game also has a mode where you can build your team by hiring people to work on it. To have better teams you will need to spend a large part of your earnings to improve your crew. As your level progresses you get more slots to hire more team members, which will greatly improve your odds of becoming the champion. This is especially important when completing repairs between races on your vehicles since they will surely take a beating.

The game has two ways for you to purchase vehicles as well. You can race the stock car for each of the modes, but you can purchase cars through the classified ads or car dealerships. It can be a bit daunting at first as each mode requires different cars so, in the end, you will be buying a lot of them. You can also tune them to your special needs and buy different parts for them, really making them your own cars.

The game includes a Joyride mode as well which is a lot of fun. It basically has two mini-games: time trials and smashing blocks. In the block smashing one, you swerve around the entire course looking to take out these yellow bricks. Depending on how many you hit you are awarded a bronze, silver or gold trophy. It takes some serious skill to hit them all. Time trials are what they seem with you focusing on getting the best time.

The game looks gorgeous as you hit the roads. The cars look great, and the weather and its effect add a lot to this release, giving it a big push for realism. As I raced down each track, splashing through puddles, with wind gushing around my car, it looked and felt great. Racing games are always great to show off your system, and this is definitely one that you should use to show what the PlayStation 4 can do. 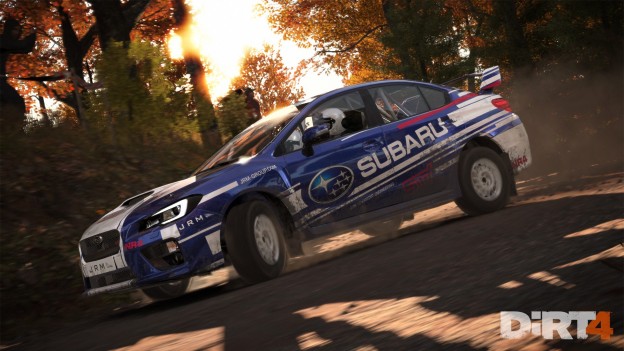 There are so many modes, races, and details hidden in this game that it will keep you busy for a long time. Once you start to master the modes, or if for some reason you find things are too easy, you can tune the difficulty and increase the challenge for the game. There is a lot to love in the game, and I couldn’t put it down after playing for hours. It was always “just one more race”, until it was two in the morning. I’m forcing myself to put it down! If you like racing games, then you have to play DiRT 4!

Disclaimer
This DiRT 4 Review is based on a PS4 copy provided by Codemasters Inc..