[PS4] Atelier Firis: The Alchemist and the Mysterious Journey Review

The world desperately needs a new alchemist to step forward! Can you help train Firis so that she is ready to become the next great Alchemist? Are you ready for a new grand adventure? Then read our Atelier Firis: The Alchemist and the Mysterious Journey review!


The second entry in the ‘Mysterious’ saga follows the adventures of the enthusiastic Firis Mistlud and her loving older sister Liane Mistlud.
The sisters have lived their entire lives in the isolated town of Ertona, where Firis uses her unique ability to see where crystals of materials are buried. By way of a fateful encounter, Firis learns of the Alchemy Exam and decides to take her first step into the outside world, setting off on a grand journey to become a certified alchemist and discover the mysteries that life has to offer!
Experience a vast world with towns, environments and other locations!

This is a double review for the PS4 and Vita versions of Atelier Firis: The Alchemist and the Mysterious Journey. The game was played by EdEN on PS4 and the_nmac on Vita. This review presents what they both had to say.

Are you ready for a new entry in the beloved Atelier series? Then its time for you to help young Firis to achieve her full potential! Atelier Firis: The Alchemist and the Mysterious Journey begins by introducing us to a young girl who has a very unique power that allows her to sense the precious ore around her. She dreams of seeing the outside world, but her father, mother, and sister think that would be a very bad idea, what with all the monsters and danger out there!

The little girl isn’t happy with her current role, but luckily things change for the best when Sophie and Patcha from the previous game in the series (and the first release in this new “Mysterious” series story arc) decide to blowup the door to the village so that they can enter. Sure, this is a bit drastic, but it definitely fits the general nature of Sophie, right? The more experienced alchemist decides to take young Sophie under her wing since Firis has a ton of potential as a future alchemist, and it is then that the game proper begins. 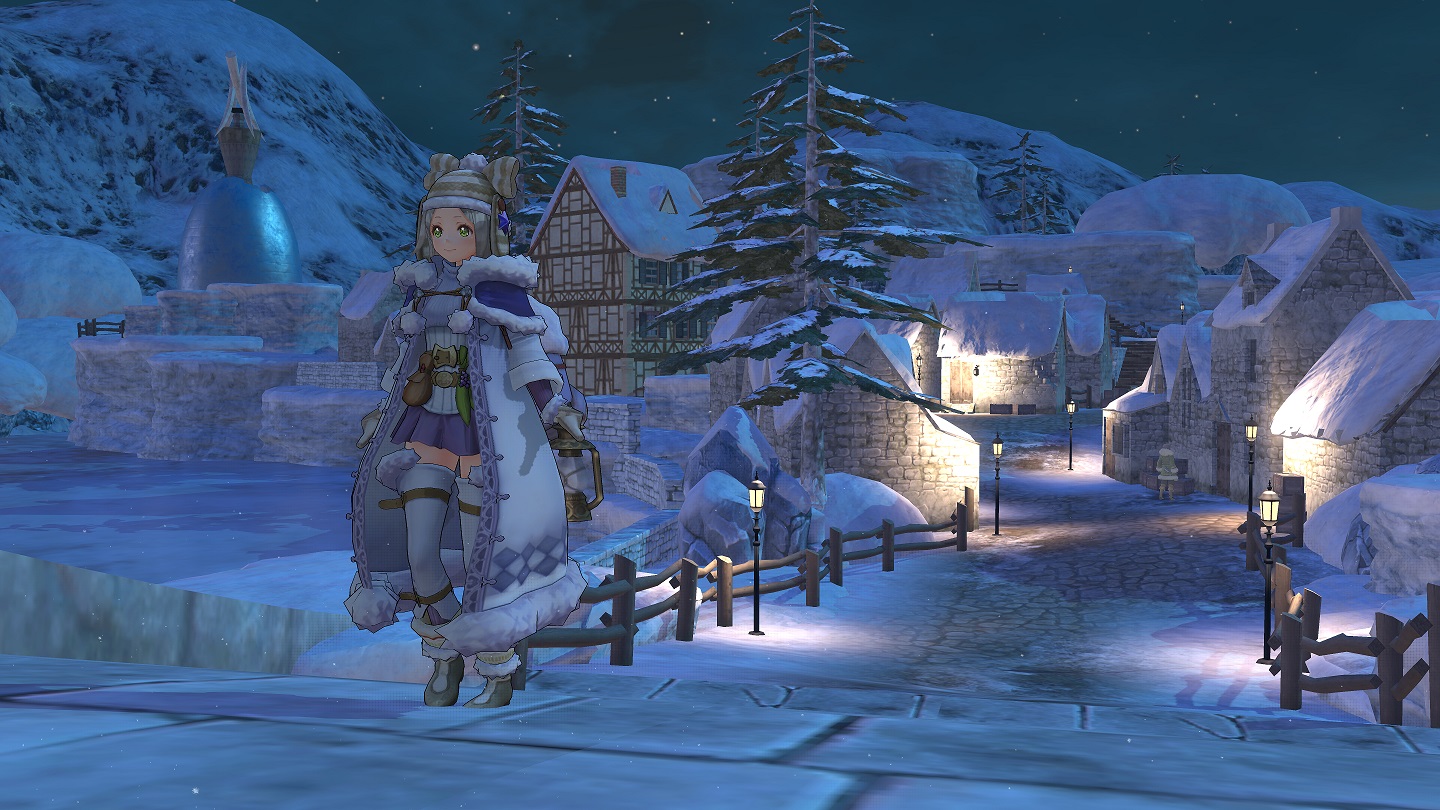 The main gameplay mechanic of the game is alchemy, as you can probably tell from its title. For alchemy, you combine elements and ingredients you find or purchase to complete items that can greatly aid you on your quest. As you level up, you’ll be able to do more things with your alchemy recipes, adding bonuses to the items and equipment you create to refine the process so that you can get more powerful versions of the same items, as well as open up the way for more complex recipes.

The game looks great on PlayStation 4, with vivid colors that bring characters and locations to life. The game looks very good on the TV and it shows how the developers have refined the look of the series to use the extra power of the PS4. It really looks like an anime brought to life which makes it easier for players to enjoy the adventure. 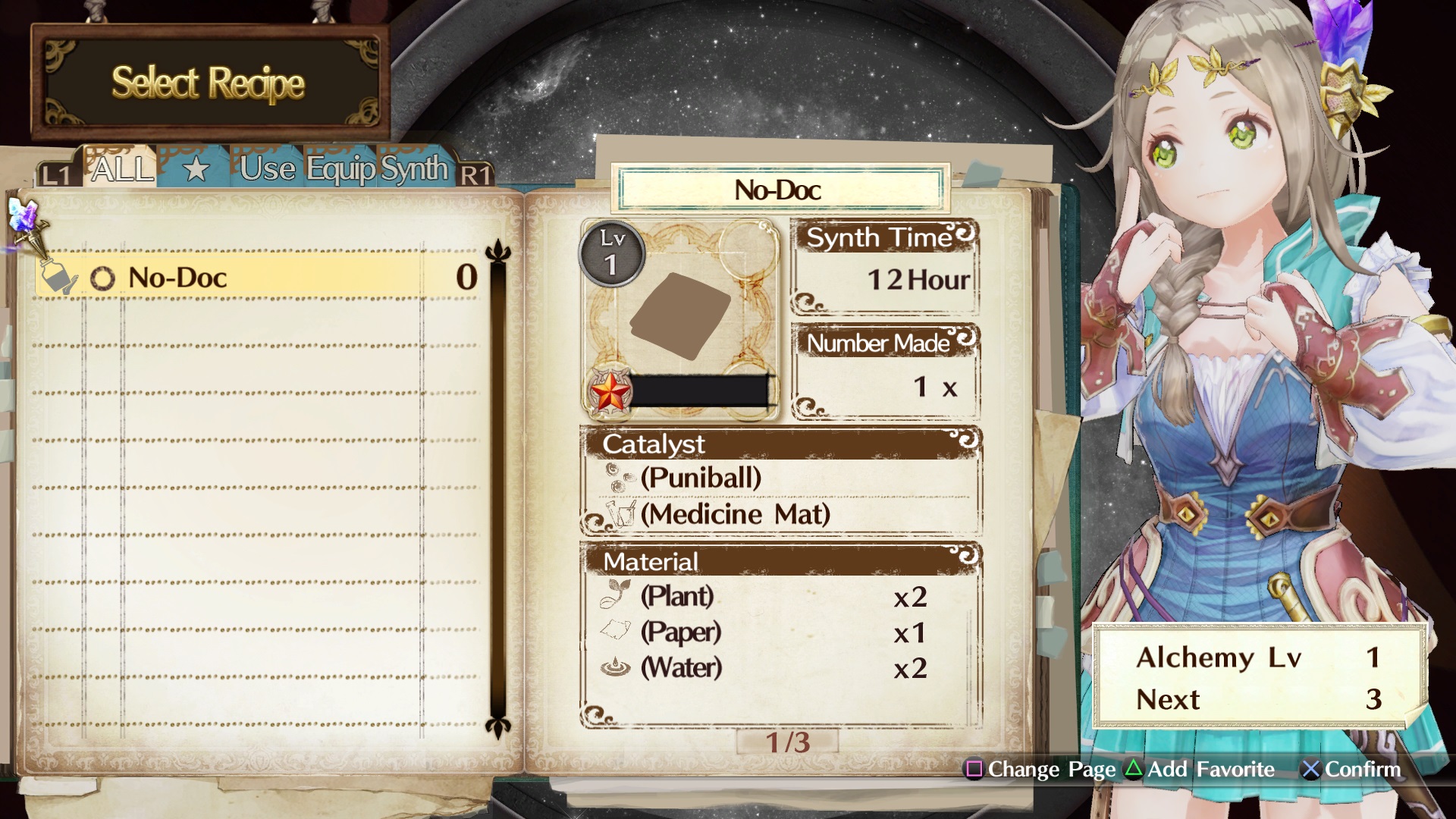 Atelier Firis: The Alchemist and the Mysterious Journey is a massive RPG, and that means we get a full trophy list with a Platinum trophy! There’s technically one missable trophy, but it’s a bit hard to get it during your first run since you need to create some very powerful equipment to even stand a chance. The “easiest” way to get that missable trophy is during your second run since you can use New Game+ for it and carry over all of your equipment and attach items – yes, the missable is tied to a fight at the start of the game that is sorta of the “you have to fail this fight” type, but you can actually win it if you plan accordingly. Overall, you’re looking at 25-30 hours to get your Platinum trophy

Welcome back to the Atelier series! It is time for players to help a new alchemist in training to reach her full potential. I’ve reviewed a few of them in the past, but I never made a huge connection to the series like I have with some other JRPG. But I thinking that is changing with this one. Playing it on Vita (my favorite way to play any JRPG) really made this an even better experience. 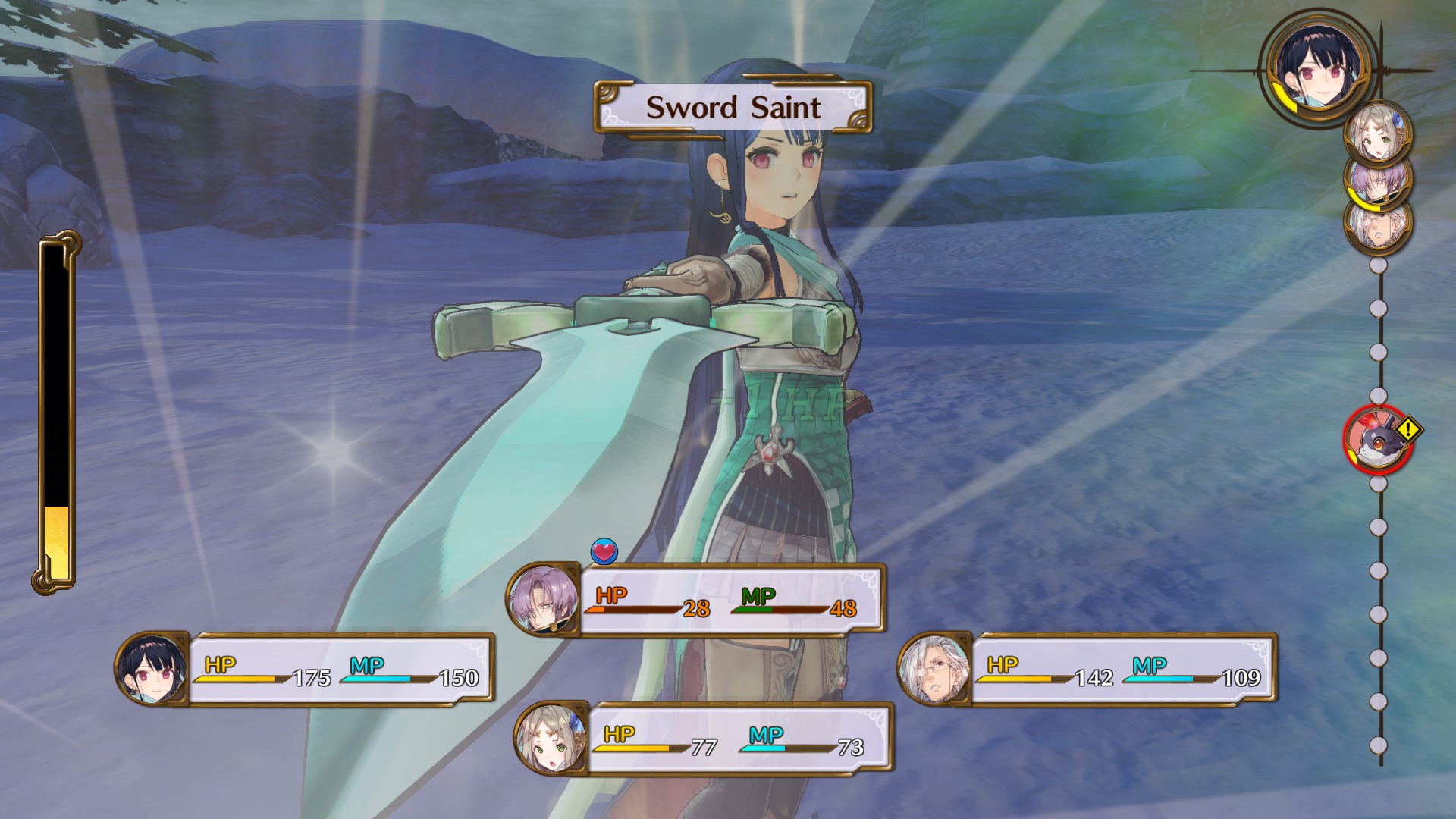 The game begins in the mining town of Ertona, where the titular Firis uses her powers to help the miners locate precious ores and minerals. The initial setting is quite charming, but don’t get used to it since you will soon be setting forth into the world for an adventure after a chance meeting with Sophie (the heroine from the previous game in the series). From there the game opens up to a world that feels larger than the one for previous entries.

One of the things that help make the game seem more open than others in the series is the new mobile Atelier. This means you’ll be able to set up your home base for Alchemy, saving and restoring LP where you go. The mobile Atelier can be established anywhere in the world where a campfire is located (and there are several campfires to find!). Not having to run back to a home base on a regular basis really helps the flow of the game. 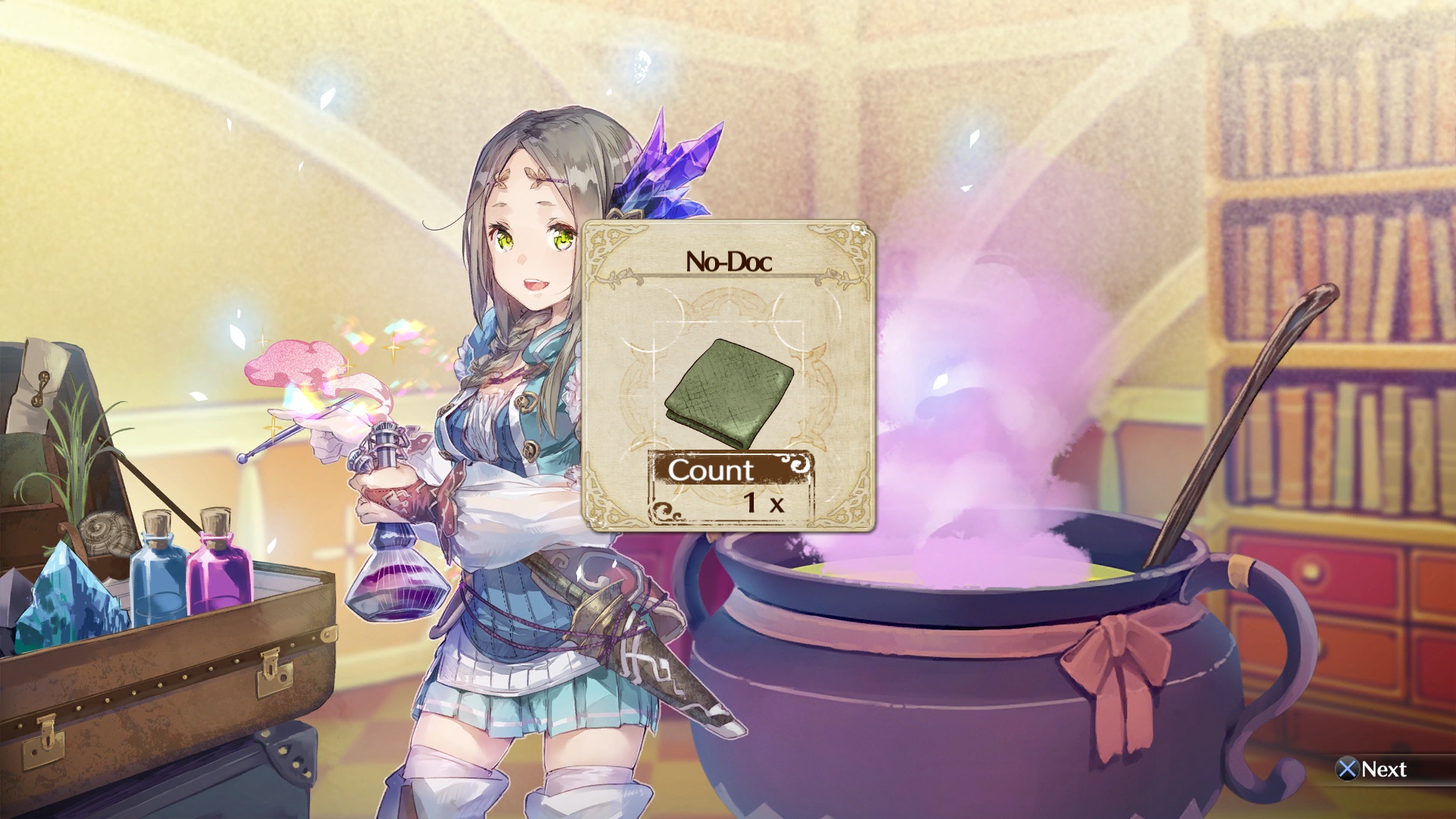 Speaking of the flow of the game, this title brings back a “feature” from older entries in the series: a time limit. The good news is that this is only established for part of the game as a test for Firis. You see, in older games in the franchise every action you took and every time you moved between locations you’d spend some of the in-game days. If you were looking out for supplies and grabbed some from an area, you’d spend a few hours of in-game time doing so. For this new entry in the series, purists get to enjoy the time limit for a bit while newcomers to the series avoid being overwhelmed as the limit is for a specific section of the game.

LP is the other addition to the game. Everything you do in the game consumes LP, and if you push yourself too far and let the gauge drain, you will see specific penalties in battle. It reminded me a bit of Persona 3 where you if you fight with your characters for too long, and their status changed to tired, you received penalties in battle. Thankfully you can restore your LP in your mobile Atelier.

The game uses 3D models with great cel-shading to create a very colorful visual style for the game. Each of the characters has a distinct look and feel thanks to this. Since I played on the Vita, I have to say that everything looked great on the small screen (even more so since I have an OLED model). The one complaint I could have is that while the characters are top-notch, the world around them seems a bit bland – there’s definitely room for improvement once the next entry is out. 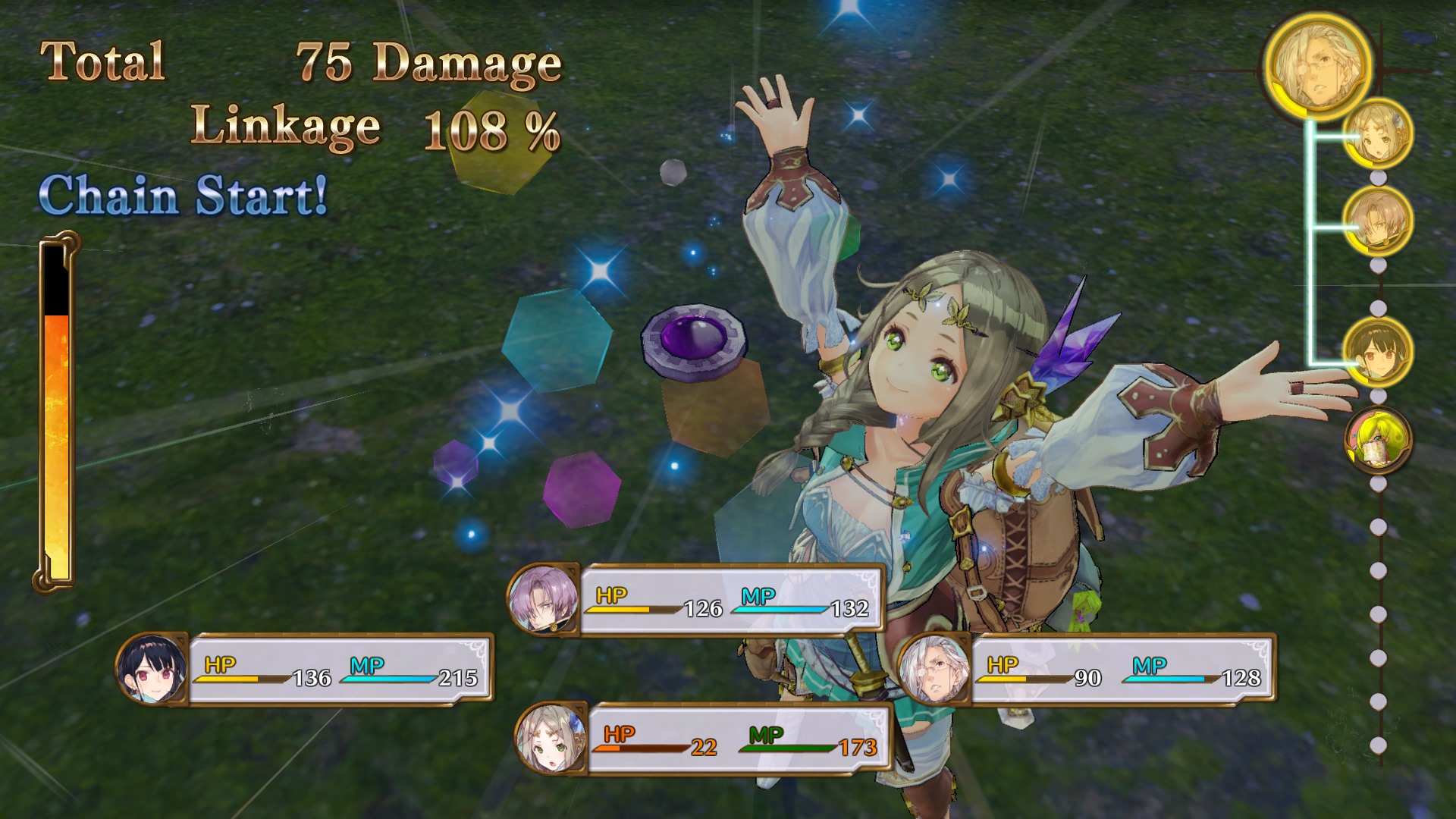 We certainly liked a lot of the changes made to this new PS4 entry in the series. Right from the start, it feels more open and accessible for everyone especially for those new to the franchise. The mobile Atelier is a very nice feature, and it makes tasks seem less like fetch quests. We also had more fun with the game’s battle system as it feels more refined. Playing it on the big screen on PS4 or on the go on the PS Vita felt great, so you’ll be able to play either at home or on the go thanks to the game’s cross-save features

Disclaimer
This Atelier Firis: The Alchemist and the Mysterious Journey review is based on a PS4 and Vita copy provided by KOEI TECMO America.

Reminder: Join us in the Chatroom for the E3 2017 Sony Conference THIS evening!