There is an ancient prophecy that speaks of a hero that will enter the portal at the Temple of Knowledge to travel to faraway lands in search of the Holy Sanctuary. The problem is that everyone who sorta likes to call themselves a hero thinks the prophecy speaks of him/her. Many heroes will journey on a quest to find the Holy Sanctuary but, unfortunately, only one of them is the actual hero of legend. 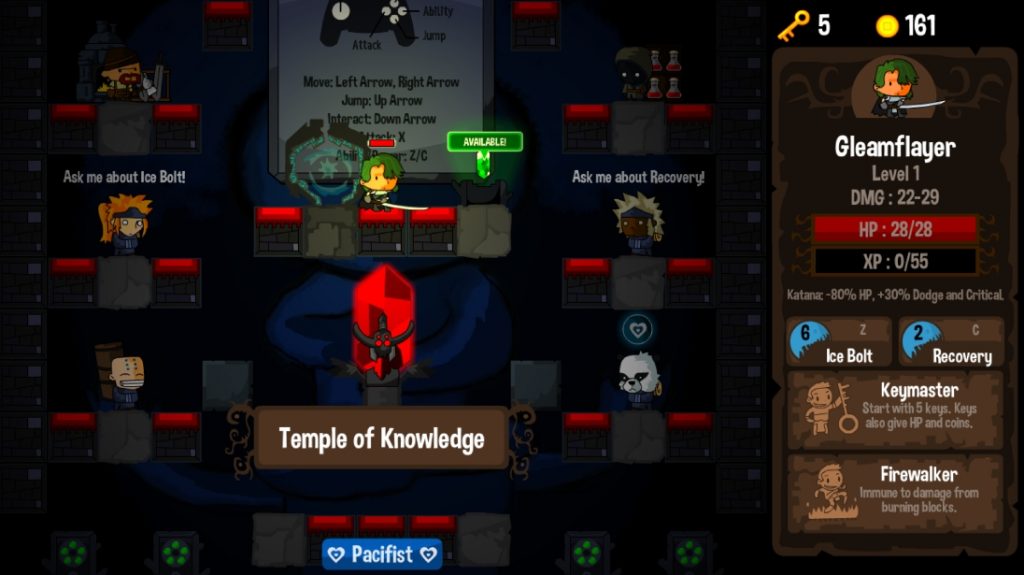 As you begin the game you’ll be able to select between a set of three available heroes. All are level 1, have specific stats for damage range and hit points, and they will have one ability as well as a special power to use. Examples of abilities are daggers which you can throw to each side of a hero to deal 50% of regular damage. As for special powers, there’s the clone one for which you can create three close of the hero with 1 HP each to help you on your quest. As for the heroes themselves, they won’t have anything special since they’re your first batch of heroes, but you’ll soon learn that this can eventually change as you learn the basics of the game.

The controls are easy to learn. You move with the left analog stick or the D-Pad, and can interact with things by pressing down. You jump with the X button, attack with the Square button and use your ability with the Circle button. If you want to activate a special power, you can do so with the Triangle button. And that’s it! 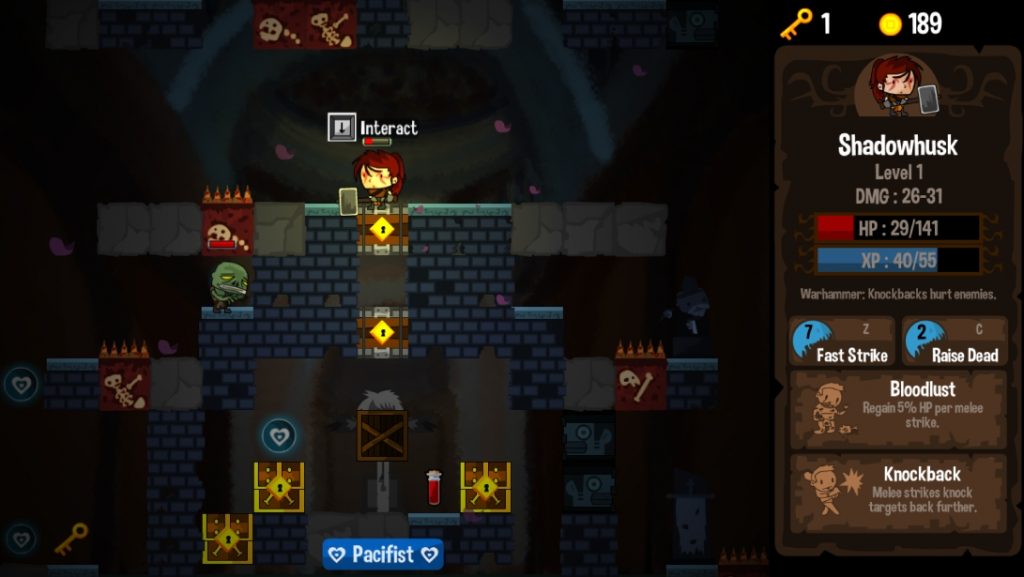 The goal of the game is simple: travel to the bottom of the area where you’ll find a portal to the next area. If you can manage to defeat the guardian, you’ll then be able to move on and continue on your quest for the Holy Sanctuary. As you travel down the map you can grab coins and make purchases that will benefit all future heroes. For example, during my first run I bought the sandworms ability which allowed future heroes to summon two sandworms t both side of the screen that will devour anything in their path, be that friend or foe. There are also shrines you can activate. Some are very helpful, while others help a little and hurt a little. I ran into a shrine that when activated spawned two gems (yay!) as well as four enemies (not yay!). Some shrines can be activated for free, while others require that you pay with your coins.

As you explore a map, you need to consider how you’ll act on your run. You can, for instance, act as pacifist and not attack enemies so that you can grab peace orbs which grant you XP and gold when picked up. Or you could instead go on an attack spree and defeat everyone on your path so that no one stands in your way, but this will make all remaining peace orbs on the map vanish. 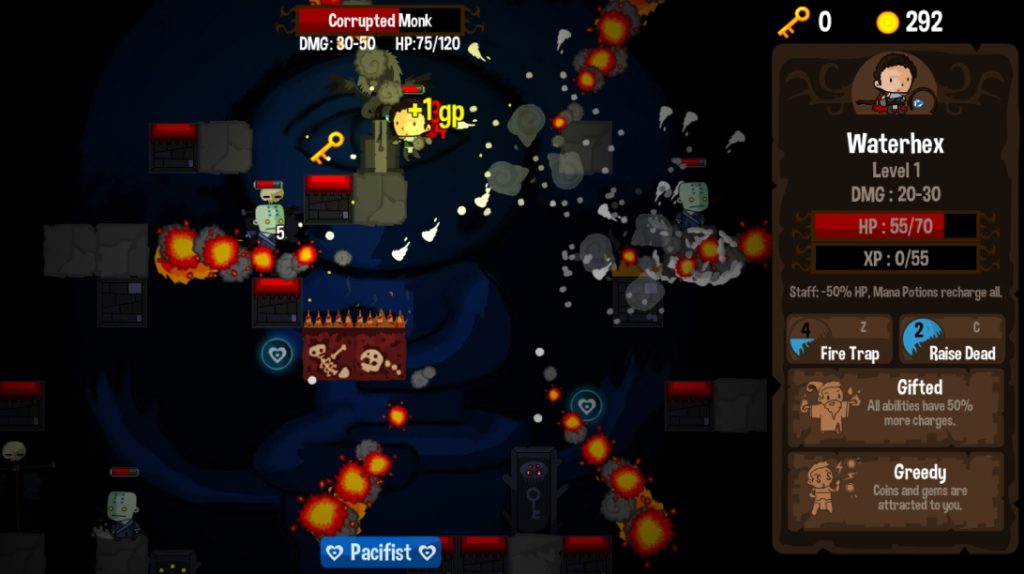 The better you do in a run, the more coins you will get. These will allow you to purchase upgrades for your hero… upgrades which are permanent! You can, for example, pay the blacksmith to improve the weapons of all future heroes so that they can deal more damage right from the start. Or you might want to deal with the apothecary who can use exotic herbs to brew great potions that will increase the starting hit points of all future heroes. 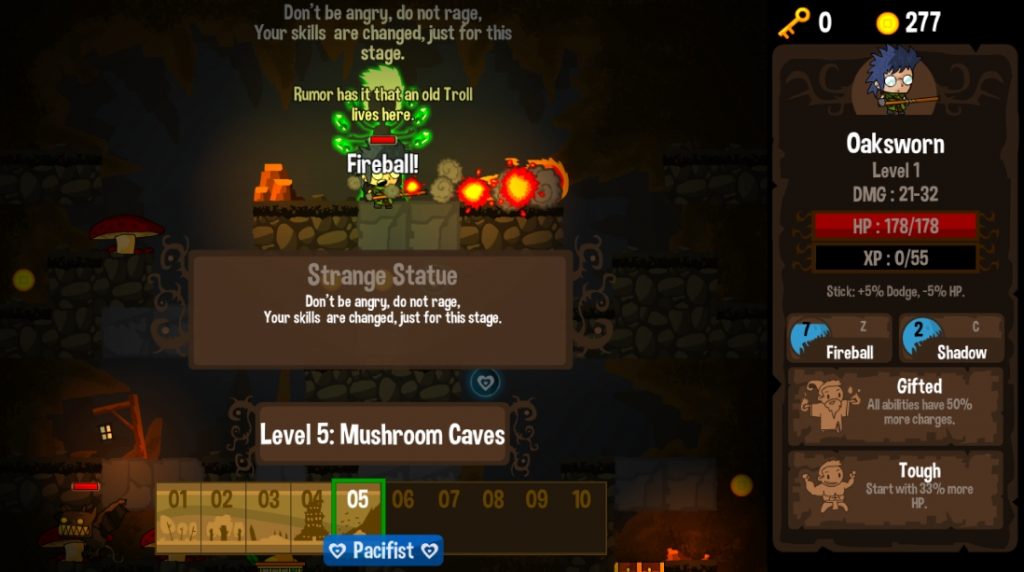 Vertical Drop Heroes HD is a fun roguelike experience on PlayStation 4 and PS Vita. Replaying levels as you learn new abilities and purchase upgrades for all of heroes is highly addictive and will easily keep you playing for hours. The one complaint I have about the game is that the font is extremely tiny. If you’re not sitting a few feet from your TV you won’t be able to read what the game is trying to tell you. But overall, that’s the one complain I can make about the game. But other than that I definitely recommend you get this one from

Disclaimer
This Vertical Drop Heroes HD review is based on a PS4 copy provided by Digerati.