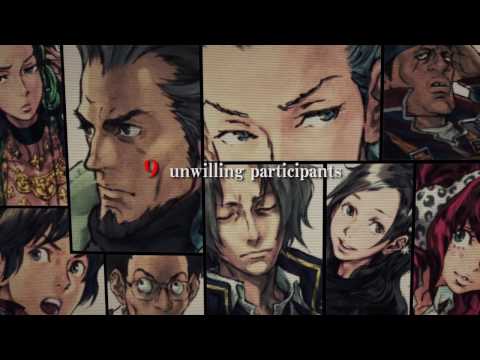 Two Nonary Games, two sets of 9 unwilling participants kidnapped to an unfamiliar location. One set trapped on a sinking boat with 9 hours to escape, the other locked in a facility and forced to either trust or betray each other. If they break the rules or fail to escape…they’ll die.
Why were they chosen to play the game? Who is Zero? Nothing is as it seems. They’ll desperately fight for survival in this deadly game of life or death.

Zero Escape: The Nonary Games is a collection of two classic visual novel games mixed into one great package. 999 was released on DS back in 2009 and is now a very hard to find game and expensive release, while Zero Escape: Virtue’s Last Reward was released on PS Vita and Nintendo 3DS in 2012, quickly becoming one of my favorite Vita games. They are now together in one great package on PS4 and Vita. For the purpose of this review, I played the PS4 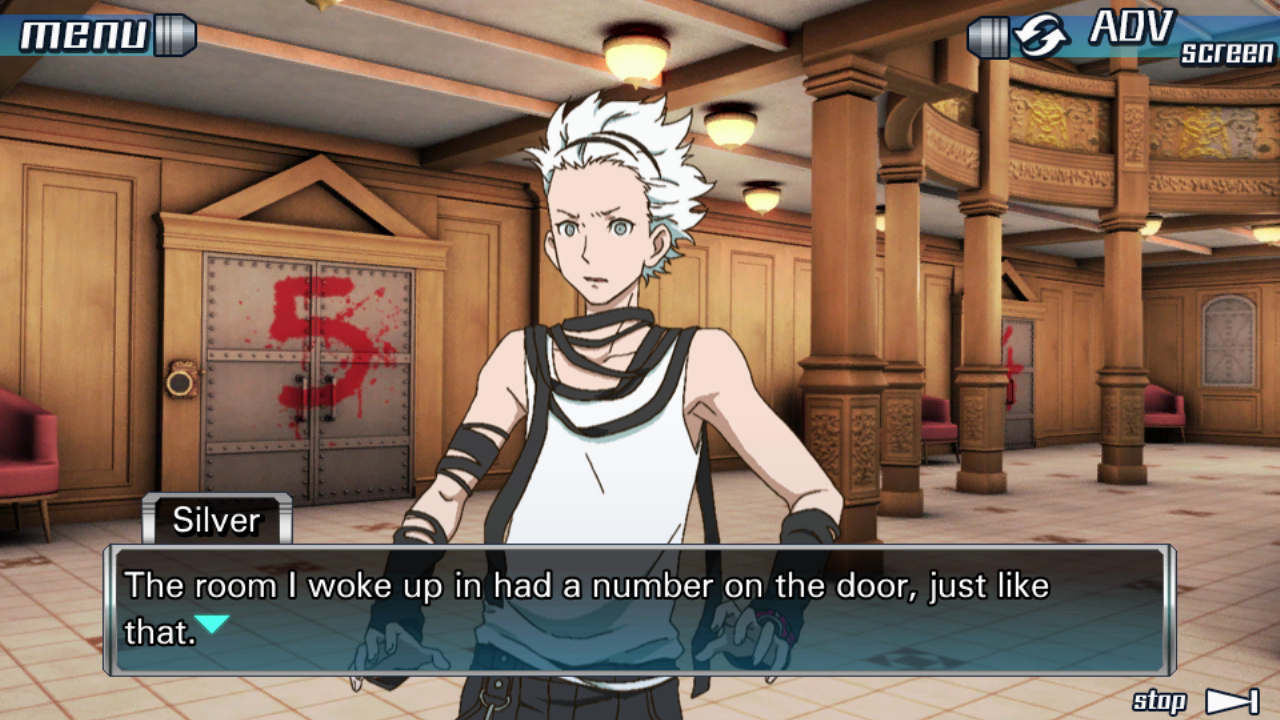 The games are visual novels with strong narrative and an excellent story in which you get to make a lot of choices. As you progress through each adventure you will reach different endings, and the awesome part about this setup is that both games have a flow chart (new to this version of 999) that allow you to go back to the different choices you made and see what happens when you make the opposite choice. This is essential to the game as you try to get the whole story. The other component of the game is the escape rooms which are played out in a point and click setting as you solve puzzles to eventually escaping the room.

I really don’t want to spoil the stories, so I will not go into much detail, but in both games, the characters wake up after being kidnapped and placed in what are called The Nonary Games. In 999 you are trapped with 9 people, each with a wristband that cannot be removed and each that is labeled with a number. The game runner Zero gives you instructions on how to stay alive and make your way through the deadly ship with the hope of escaping and finding the number 9 door.

In Virtue’s Last Reward you and 9 other people are trapped by Zero the 3rd, a rabbit AI. Once again wristbands are in effect, but this time they display points – get nine points, and you can escape the 9 door. Reach 0, and you are injected with a deadly toxin that will kill you. You get or lose your points by choosing to ALLY or BETRAY your fellow captives, so trusting people can result in your death. 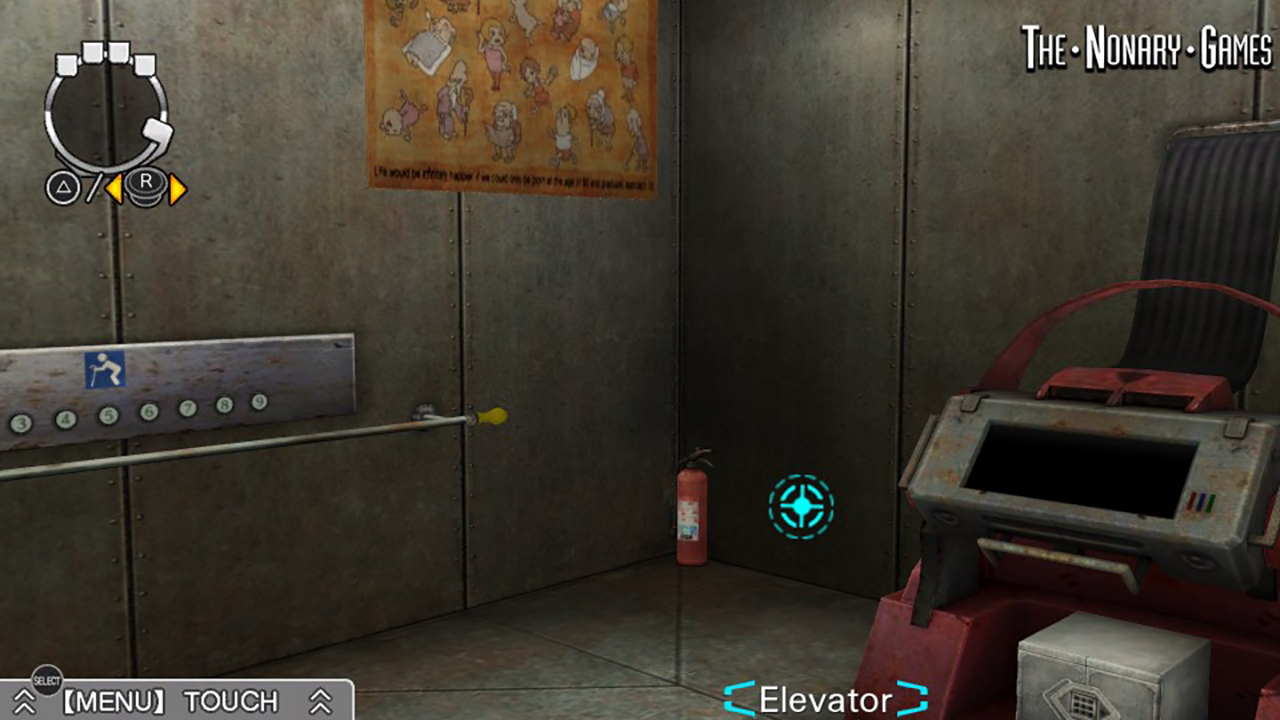 Both games tell great stories. I hadn’t played 999 before, but I did Platinum both of its sequels, so I was looking forward to jumping right into it. While the experience was shorter than the other two, I had a great time… I actually played for almost 8 hours straight to get to the proper final ending! That’s how great the story was. The game’s characters are interesting, with hidden back stories that you really want to discover. Why are they there? Why did Zero need them? How are they connected? That’s the mystery you will untangle with many twists and turns along the way.

Virtue’s Last Reward I played back in 2012. As my introduction to the series it was great, but now that I have been able to play 999, it connected so many dots about the main characters in the sequel that I got to enjoy it even more. Similar questions arise in this game as well, but the stakes always seem higher and the consequences deadlier. Choices are more predominant in this game creating many endings and a much longer story overall. If you haven’t played this one yet then you are in for a treat! 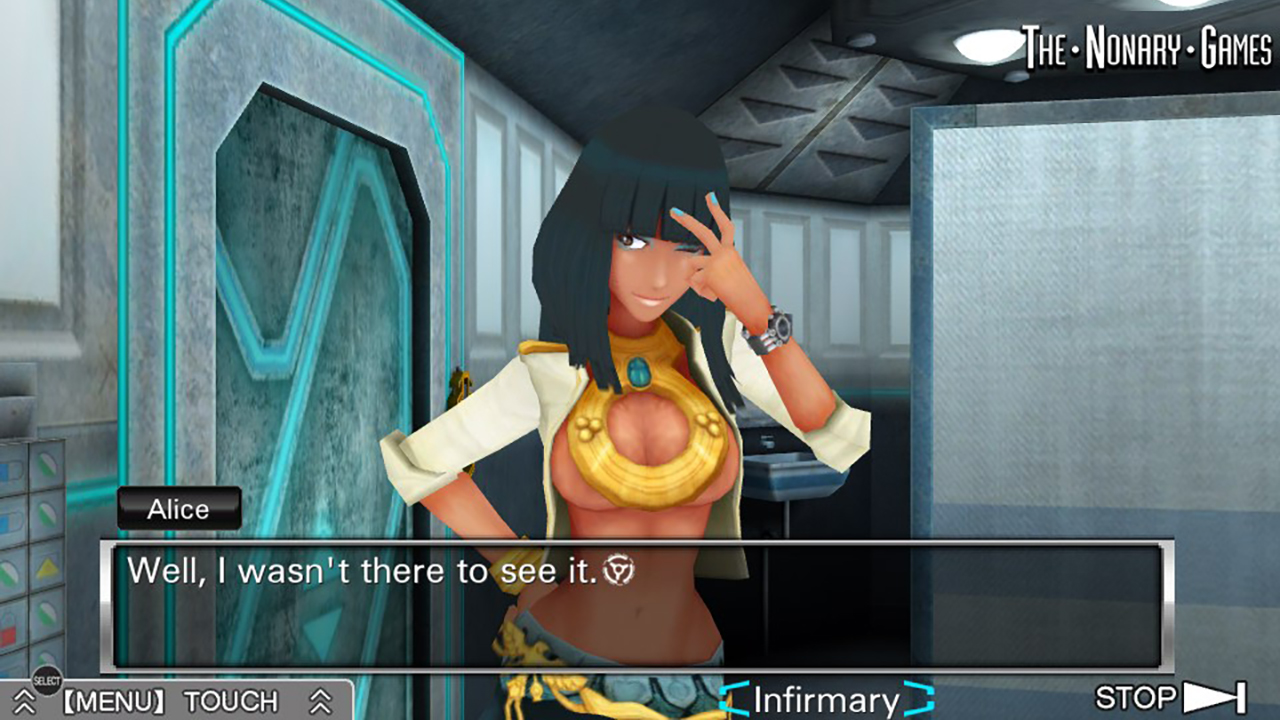 Let’s talk about the other big facet of the game, the Escape Rooms themselves. I love Escape Room games, be that in video games or real life. There is a certain logic that you need to understand for them to make sense, and once you get it, it shouldn’t take you too long to escape. I found the rooms in 999 to be very simplistic overall, with very few tough puzzles to figure out. As the first game in the series, this is to be expected.

VLR amps the puzzles to the next level creating bigger and more complex escape rooms. The trick with these is that each room has a safe with two special combinations, one giving you the key to access the exit and the other giving you a special piece of information and lore. Getting that second combo will often take some extra time as you revisit puzzles you have already done and look for a new potential spin on them.

As they are visual novels, the interface to the games is important since you spend a good amount of time processing the story – in fact, some story sequences can go on for over 30 minutes at a time! 999 received a big overhaul from the DS version with a much more interactive approach, focusing on telling the story in adventure mode – worry not since you can still switch to the older novel version if you want.

You can access your folders logs and the flow chart from any point, and are able to save even in the long story sequences to ensure you can always come back to them. I was surprised the overhaul didn’t more directly take inspiration from VLR which I thought had a great setup and design on Vita that worked very well on PS4. 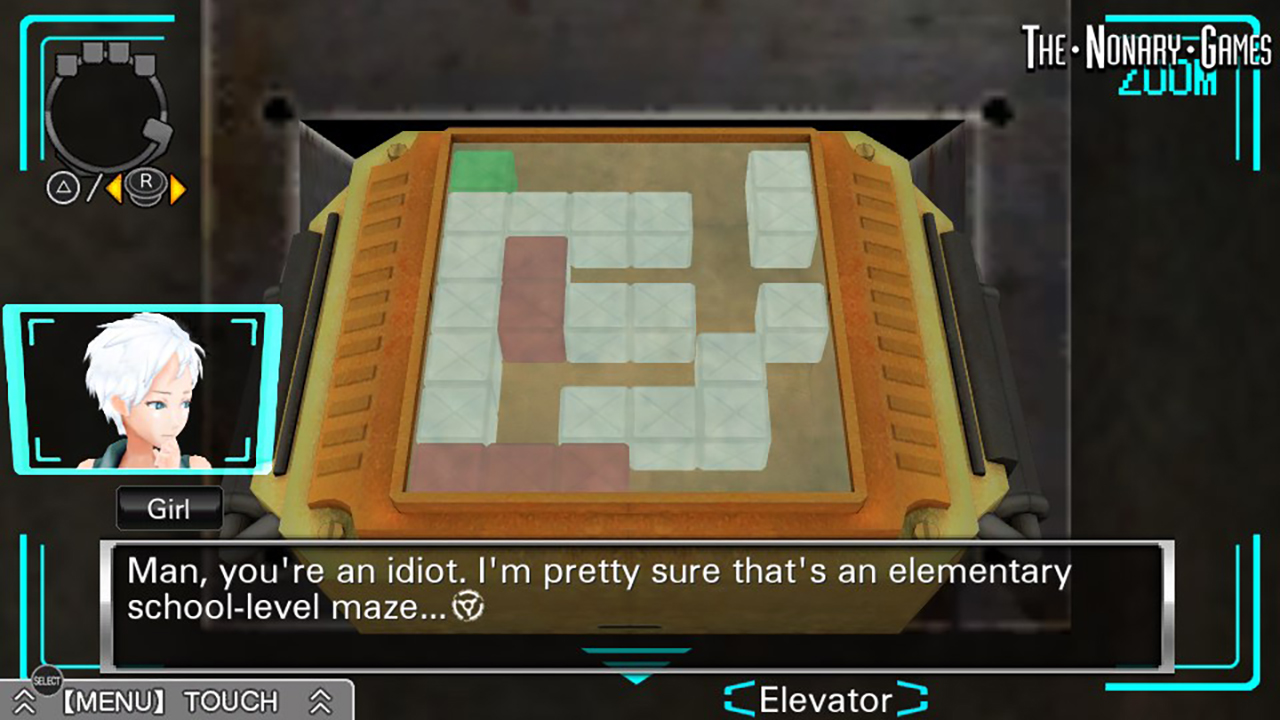 In 999 the presentation uses hand-drawn 2D sprites that have some movement depending on the situation. It’s more as if you’re looking at still images with a bit of life. It looks great and has made the transition to a bigger screen with a higher resolution very well. In the long run due to this ascetic choice, 999 will age better out of the whole trilogy.

Virtue’s Last Reward took the jump to 3D models and environments. The game, as it was developed for older handheld devices, is showing it’s age on the PS4… not that that’s a bad thing overall! The game’s characters look good and are well rounded, but they don’t emote with their faces as effectively as we have seen from other games over the past few years. It’s interesting to see how the series art direction has changed, especially once you throw in Zero Time Dilemma into the mix – it came out last year and looked very different from the others.

The collection has 38 trophies overall with a single Platinum for beating both games. I was hoping we would see two sets of trophies with one Platinum for each game as has been the case for other collections. When you fully beat 999, you will have unlocked 25% of the trophies, while those for Virtue’s Last Reward are pretty much pulled from the trophy list on the original release. 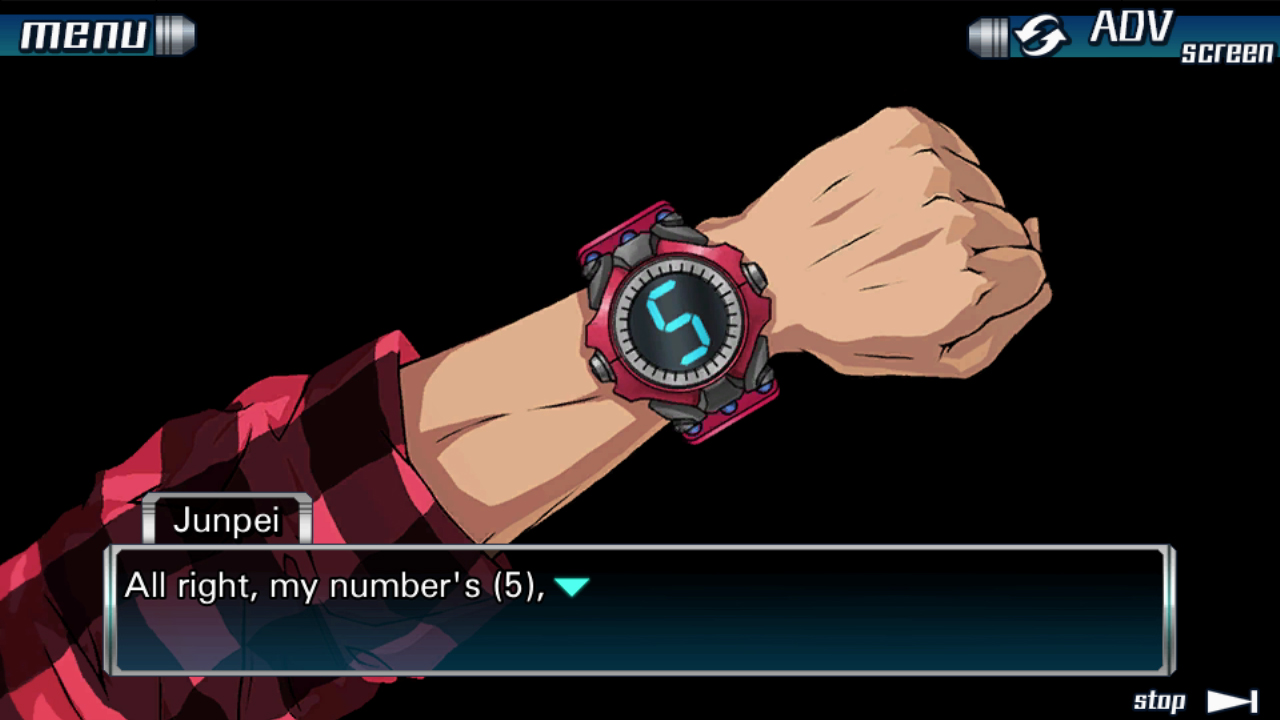 I have a certain reverence for the Zero Escape series and hold it is certainly one of my favorite franchises. The narrative weaves a tale of corruption and deception, creating a deadly thriller where you want to find out the outcome. The Escape Rooms are great, especially VLR’s excellent rooms. This is a must play whether you do that on Vita or PS4. Once you have played both of these don’t forget it’s Zero Time Dilemma which I absolutely adored, giving it a perfect score. I’m not sure what’s next for Zero Escape, but I hope they continue with the series! 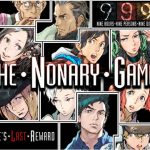 Disclaimer
This Zero Escape: The Nonary Games Review is based on a PS4 copy provided by Aksys Games.