Danganronpa 1•2 Reload is a collection of the two excellent games that released on the PS Vita. Both are interactive murder/mystery visual novels, and some of the best at it. Your main goal in each game is to solve a series of murders and find the killer. The games have been remastered with 1080p visuals, and the controls have been mapped to accommodate the DualShock 4. Want to learn more? Then to our Danganronpa 1•2 Reload review!

In Trigger Happy Havoc you are accepted into a prestigious school that is reserved only for students who are ‘ultimates’ in their best subjects. Things begin to turn sinister when the students realize they are all trapped in the school with a murderous maniac called Monokuma – a black and white bear. He gets his thrills from seeing the students in distress during his deadly despair games.

You play as Makoto Naegi, the ultimate Lucky student – he won his sport through a raffle. For some strange and unknown reason, Makoto falls asleep and suddenly wakes up surrounded by other ultimate students. Once they learn they are trapped by a teddy bear, who loves things done by his rules. Each student is given a rulebook they must follow, and if they don’t, they will face the consequences. Monokuma says that to ‘graduate’ they must do the unthinkable: murder another person and not get caught! 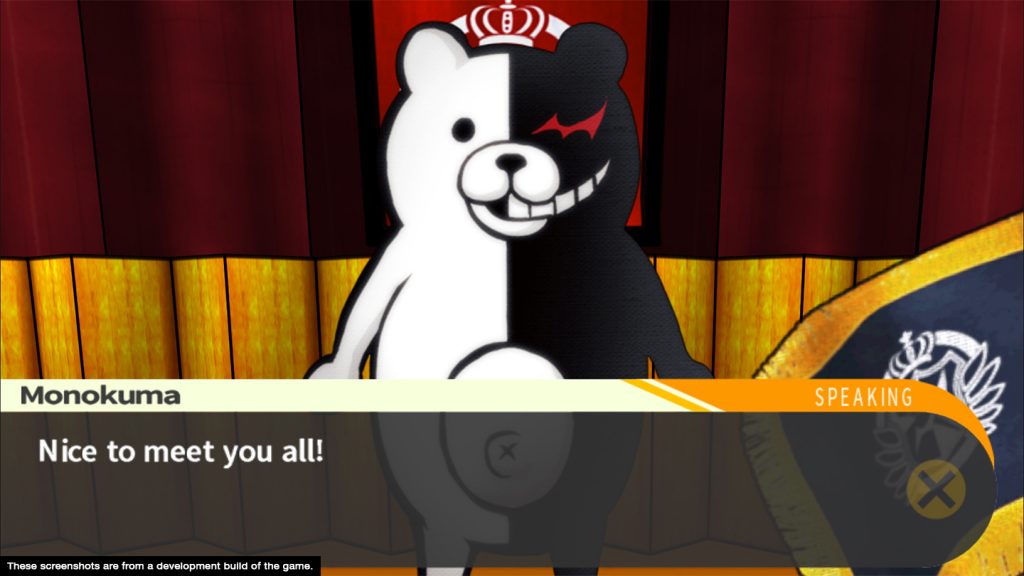 Danganronpa: Trigger Happy Havoc is a visual novel, so do expect huge walls of texts! It’s not quite as text-heavy as other visual novels out there, but you do get to learn a lot through text descriptions. You can freely roam around the school during ‘free time’ and can use this to speak to the other students and get to know them better. This will allow you to increase your friendship bonds. You will need to do this at every opportunity you can to fill out the report cards for everyone.

The game has a rich and diverse cast of characters. You have geeks, nervous wrecks, intelligent, sporty and just plain weird students. Each has an interesting backstory you’ll want to learn more about. As you progress in the game students will start to fall like flies, and you’ll need to find who the murderer is! Seach for clues, gather evidence and interview all potential suspects. When you’re done with all that, it is time for judgment day! 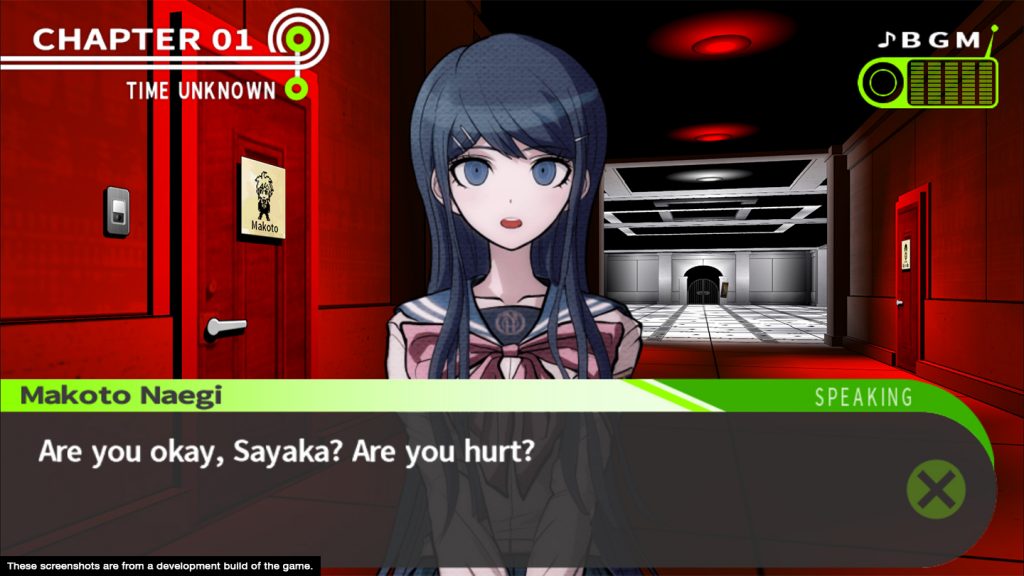 You will enter a courtroom for a reaction based trial which involves listening for any inconsistencies in the stories of the suspects. If you think a testimony doesn’t quite ring true, you can present a piece of evidence that contradicts it – these are called ‘truth bullets’ and you shoot their words down with a gun so that Makoto can interject with a challenge. As the game progresses these trials become more challenging, and will be even more difficult if you choose a higher difficulty setting.

When you finally reveal a killer, a cutscene will play out with Monokuma executing them while enjoying it a bit too much. That guy is sick! As more students meet their maker, those left behind become considerably nervous and paranoid, which makes the game very interesting. This is an excellent visual novel and one you’re going to love on PS4!

In Danganronpa 2: Goodbye Despair, you’ll find yourself in a completely different setting – Jabberwock Island! While not completely mandatory, I do suggest that you play the games in order since being familiar with Trigger Happy Havok will allow you to better understand Momokuma and some of the gameplay mechanics in the sequel.

You and a new group of ultimate students are on a nice lush tropical island packed with surveillance cameras and monitors in every single location, just like in Trigger Happy Havoc. You will be introduced to a pink rabbit called Usami who encourages the students to get to know each other and become friends. But in true Danganronpa fashion you won’t have to wait very long for that maniac Monokuma to start wreaking chaos!

As in the previous game, the students will begin to realize they are trapped on the island with absolutely no possibility of escaping. They are on their own with no one to turn to for help. And no, there is no way to contact the outside world. No mobile phones, landline phones, computers… nothing! 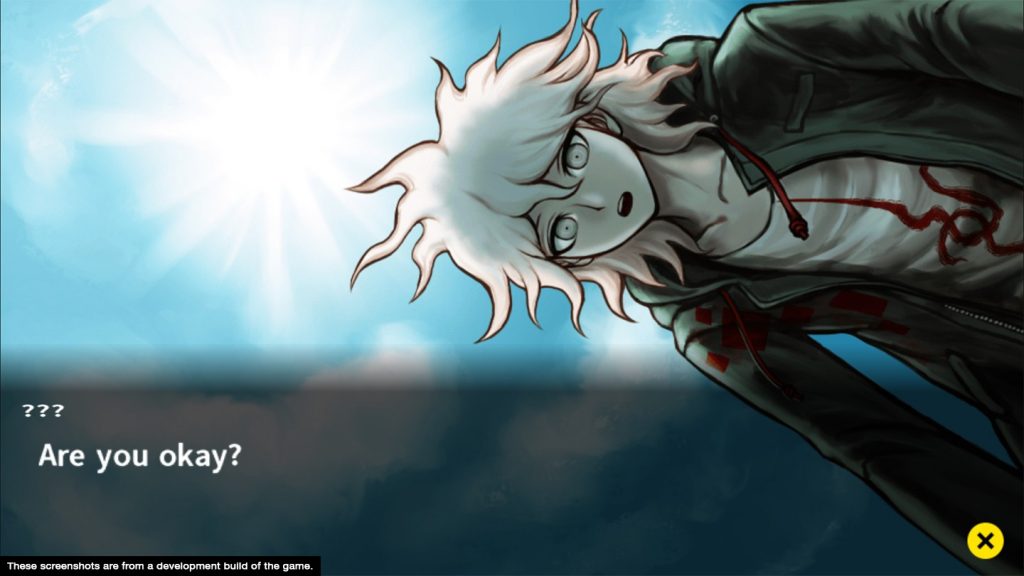 The game definitely feels a lot bigger as it includes many locations: parks, beaches, a hotel, a supermarket, a ranch, and even an amusement park! This might be a remote island, but at least there’s a lot for the characters to do! And just when you’re settling in this bizarre location, Monokuma shows up and tells everyone what they need to do to graduate from the island: kill one of their peers without being caught. Ring any bells?

As protagonist Hajime Hinata you must investigate when a student dies and gather enough evidence to name the killer. The murders in this sequel are much more elaborate, but at the end of the chapter, you’ll still go into a peculiar type of trial. Truth bullets are once again part of the equation, but it is joined by some clever mini-games. This means you’ll be taking on stuff such as skateboarding through a tunnel to navigate branching paths to be able to select your next argument.

As you advance in the game, there will be plenty of interesting twists and turns that will keep you engaged from start to finish. You’ll witness how sick that black and white bear really is. He thrives on emotions such as despair, panic, and stress! He is a very weird creep, that bear.

As in Trigger Happy Havoc, you can have some free time to talk to your fellow students and get to know them better. This will allow you to earn hope fragments for your report cards, and you can and should obtain gifts for your companions. You’ll require multiple full playthroughs to complete everything in this sequel, so if you’re going for the Platinum trophy you’ll be spending quite some time with this package! 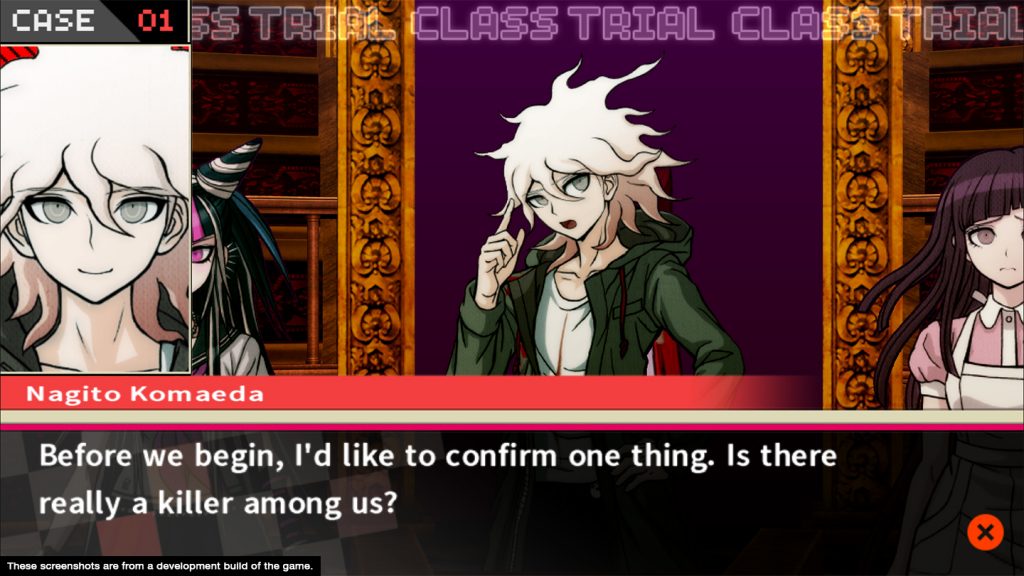 That’s right, Danganronpa 1•2 Reload includes a full trophy list with a Platinum trophy. Unfortunately, it’s just the one Platinum trophy for getting all trophies in both games instead of having two separate Platinum rewards for your effort.

The Danganronpa games are wonderful visual novels with excellent casts of characters, so I highly recommend that you give Danganronpa 1-2 Reload a go on PS4. This is especially important since that way you can prepare for the release of Danganronpa 3 later in the year!

Disclaimer
This Daganronpa 1•2 Reload review is based on a PS4 copy provided by NIS America.