88 Heroes is a 2D action/platformer from Bitmap Bureau and Rising Star Games that you should be careful with. Why? Because this is one of the most addictive action/platformer releases of the year! Read our 88 Heroes review to learn more about this clever console release!


The premise for the game is easy to understand. You have 88 heroes, 88 seconds and 88 rooms, and your doomsday clock has 88 minutes. Every single one of the 88 super heroes has different abilities and, unfortunately, a large portion of them are somewhat useless and won’t even make it out the door. But the ones that are powerful are the ones that matter.

There are three game modes: 88 Mode, Magnificent 8 Mode, and Solo. Your mission is to stop Dr. H8 from obliterating Earth with 88 thermo-nuclear warheads. He plans to do this at 8 minutes past 8 on the 8th of August 1988. Unfortunately, you have only 88 minutes in the doomsday clock to save the world. Dr. H8 is watching you from the comfort of his lair, drinking tea and milkshakes, cackling every time a hero fails and dies. 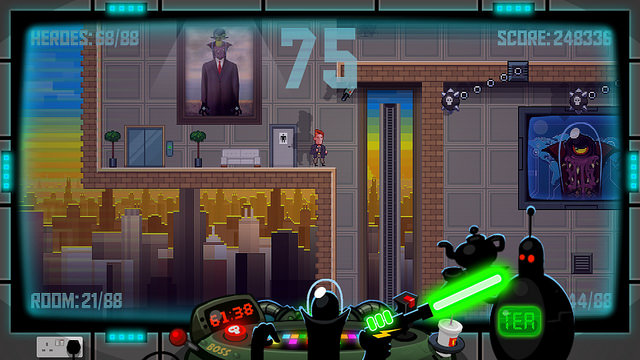 In 88 Mode you have 88 rooms to conquer with a boss at the end of each batch of levels. Each room only gives you 88 seconds to beat it, which is very doable if you can get past all the traps and hazards that Dr. H8 has set up for you. Oh, and you only have 88 minutes to complete all 88 rooms. The timer will never stop, even if your heroes die, but your 88 seconds will reset with every new hero. There are four zones and a boss at the end of every zone. They became more and more difficult as you pass each zone, so beware! In 88 Mode you will go through the entire cast of misfits, and it is also a great starting mode for the game since you will get plenty of practice.

This is important because in the next mode called Magnificent 8 you get to pick 8 heroes and 8 heroes only to try and conquer the entire 88 rooms in 88 minutes. As you can imagine, only being able to select 8 heroes means you better select the best ones of the lot or else you’ll be dead before you even get a chance to make a dent on things! 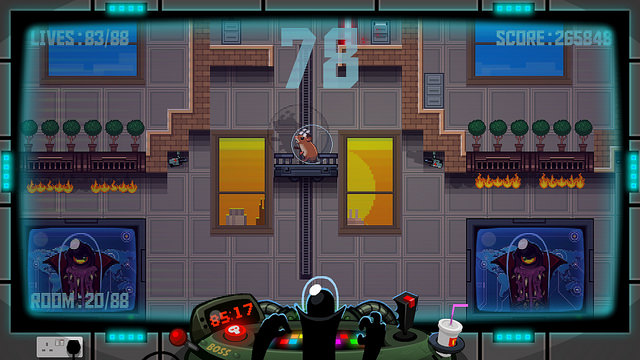 Last but not least is Solo mode. For this one, you get to pick one and only one hero to play through the entire 88 rooms in 88 minutes and 88 seconds per room. This is the hardest of all three modes and one that will test your skills to their fullest. Can you find the perfect hero for the job?

When a hero spawns, you are given a short look at their funny bios and abilities which is a nice feature. The problem with that is it covers half the screen, and you could easily walk into a pit of spikes if you’re not careful! Another thing I found a bit annoying was Dr. H8’s tall minions – they will walk past the screen blocking your field of view which can lead to a cheap death and waste a hero.

That being said, this is not a deal-breaker since you will die a lot anyway. On that note, some of the death of you heroes will certainly have you laughing. I’ve played a lot of the game, and I’ve pretty much died in every possible way imaginable! Why is there no trophy for dying in every possible way? That would have been a very achievable trophy without even trying! 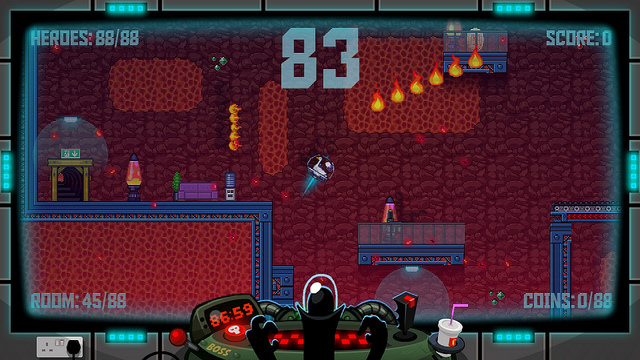 You have to play each mode to a certain point for the next one to unlock, which is a feature I don’t like – I prefer all modes to be available right from the start. But for this particular game, I can sorta understand why the modes are locked like that since the game gets a chance to teach you what each hero can and can’t do before you are given the option of doing a run for the other two modes.

88 Heroes is a highly addictive and very funny game. The visuals are great, and other than the few complaints I’ve mentioned, it’s a very solid game. The 88 heroes are a diverse cast, and each has very different personalities and traits. The game is absolutely worth the price of admission since you’ll have a ton of fun with this one. Be sure to pick this one up on PS4, and do let me know who your favorite heroes are!

Disclaimer
This 88 Heroes review is based on a PS4 copy provided by Rising Star Games.

Everything Now Available On PS4