The Bethesda-verse has arrived in Pinball form! Set out to the Wasteland, to Skyrim, or to the depths of hell in these new tables based on some of the hottest franchises in gaming. Come check out our Zen Pinball 2: Bethesda Pinball review!

Stay alive in the stunning yet hostile environments in three fantastic pinball tables inspired by the most iconic Bethesda franchises.
– Explore the secrets of the Wasteland in a world decimated by nuclear war, join Factions, raid Vaults and collect Bobbleheads on the Fallout® Pinball table.
– Fight your way through the UAC research facility, taking on hordes of demons to earn the Demon Slayer name on the DOOM® Pinball table.
– Craft weapons, wield magic, equip armor, buy and sell goods, mine materials, find trainers and complete side quests before defeating Alduin and fulfilling your destiny as the Dragonborn on The Elder Scrolls V: Skyrim® Pinball table.
– Leaderboards, score tracking, exciting social features, and more

I always start my Zen Pinball 2 table reviews with the text below, and now is not the time to make an exception!

Zen Pinball 2: Bethesda Pinball adds an interesting spin to the popular and long-running pinball table franchise by bringing tables based on the worlds of Fallout 4, Elder Scrolls V: Skyrim, and DOOM! It’s something I certainly wasn’t expecting, but which I’m delighted to play on my PS4.

I’ll start off with the Fallout table as that franchise is near and dear to my heart. 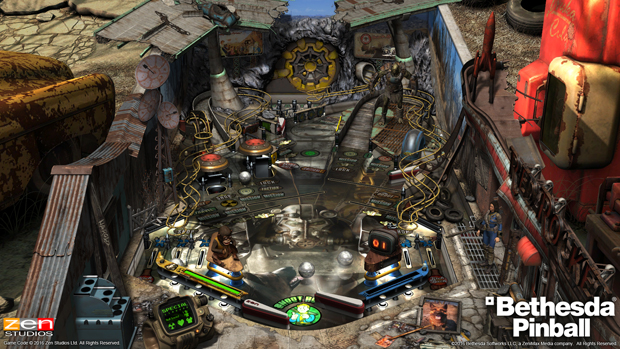 The Fallout 4 table has you choose from a few avatars for your version of the Wastelander – and you can also choose it’s SPECIAL stats! Since for playing the original game you also have to create your character, this was a great addition to help personalize my pinball table experience. This pinball table has you battling super mutants in Commonwealth, and your character is regularly put into conflict with the super mutant on the table.

As you play, the game will throw in a smattering of RPG elements into the mix, including shops where you can buy different power ups! It even comes up in the clunky LCD screen that you would see in Fallout 4. The table is really well done, featuring the Vault door and different aspects of the wasteland throughout. The one downside the added RPG elements is that it does slow the pace of the game down considerably. 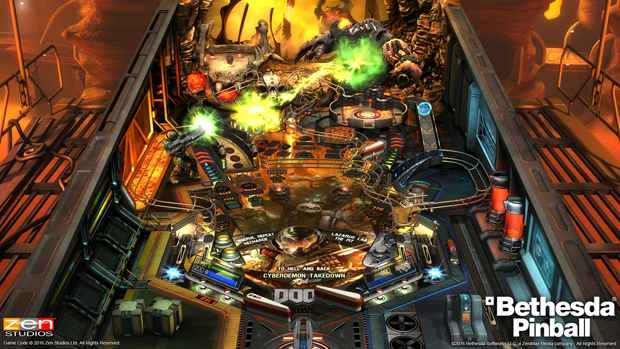 Next up is the DOOM table. This one is most similar to the traditional pinball tables in the series. It’s a fairly straightforward table set in the world of DOOM, demons and all. This one actually ended up being my favorite of the three as it was quick and furious and offered a very fast-paced gaming experience!

As mentioned before, there’s plenty of demons on this table, including a huge one in the top right-hand quarter that towers over the table! I haven’t gotten a chance to play the DOOM reboot on PlayStation 4, but based on the footage I’ve seen of this release, the pinball table does the setting justice. This one is setup perfectly with the ball cascading all over the table and allowing you to rack up some considerable combos. The game also features a mini-table in the top left corner which is a nice bonus.

The look of the table is great with it really pulling the feel from DOOM as far as its sound and design are concerned. The launcher is a chainsaw which was an awesome touch, and the game has a solid metal/electronic music playing during the action. It also has several lines of audio I’m sure are pulled from the audio logs in the new game. The other great touch I loved was the HUD having the face of the DOOM Soldier – his face changes as you play, just like it did in the original release from back in the day! 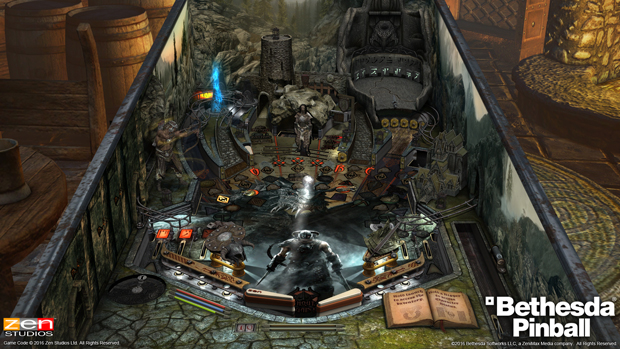 Finally, for some reason, the Skyrim table, the one I thought I would enjoy the most, ended up being the one that requires the most time but which deals the least enjoyment overall.

Similar to the Fallout table, this one has extra RPG elements thrown into the mix. You create a custom character, pick a class and then head out into the world of Skyrim. This game really makes you feel like you are in Skyrim. From the music taken straight from the game to the sound of footsteps as you play, this gave me flashbacks to the 80+ hours I poured into Skyrim. One cool thing is that you can actually keep the character you created over multiple playthroughs, and then continue to customize it, encouraging players to put more time into this table.

Where this table has some issues is in its design, the RPG elements, and its quest system. First of all, I found the middle of the table to be quite empty, with nothing but a cave in the top middle. I found many situations where my ball would fall straight down without a chance to catch it with the flippers! It just sucks when you feel losing a ball was out of your control and there was nothing you could do.

I had a lot of fun with the Zen Pinball 2: Bethesda Table pack. The DOOM table ended up being my favorite, even though I didn’t have a connection with the recent source material – this goes to shows the strength of the table design. I liked the Fallout table since I love the Fallout universe in general, and certainly had fun playing it. I still enjoyed the Skyrim table, but it had the most flaws of the group too. Great design and aesthetic, but the table itself doesn’t reach the goals I think it was aiming for. Overall, this is a great showing for Zen Pinball 2 and a bundle you definitely need to try for yourself.

Disclaimer
This Zen Pinball 2: Bethesda Pinball review is based on a PS4 copy provided by Zen Studios. 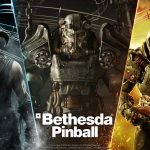