Where are all these bugs coming from? Who is going to exterminate them? Guess it’s time to call the Bug Butcher! If you’re looking for a fun fast-paced release with some old-school charm, the come check out our The Bug Butcher review!

‘The Bug Butcher is an action-packed 2D side scrolling shoot em up game where peril comes from above.

So in a nutshell, pest control with machine guns in space.

The core mechanics hold old ties from the classic arcade shooter “Super Pang” where you shoot vertically, but with modern day twists. You are Harry, a brash and tenacious exterminator who has a knack for decimating bugs.

Harry’s current assignment takes him to the infested futuristic research facility on planet Zoit. The surviving and dwindling number of scientists employed him for his slaughtering skills. Harry’s mission: survive until the decontamination of the building is complete, hoard coins like his life depended on it, and protect the scientists at all costs. Watch out for the spiders as they have a particular fondness for rubber encased scientists. After landing, you will move from room to room through the facility blasting rockets, lasers, and wielding the power of lighting upwards at anything not human. ‘

The Bug Butcher is a love letter to old-school arcade games. There’s no huge story to get in the way of some old-fashioned and fun arcade-style gameplay. It’s part of the reason why Resogun is still one of PS4’s best games, and it helps to make this one shine.

The game’s concept is simple: You are taken to a research facility where you need to move through all of its rooms as you exterminate all bugs. Each room has bugs entering from different places, and you have your gun pointed directly up and must shoot them all down. 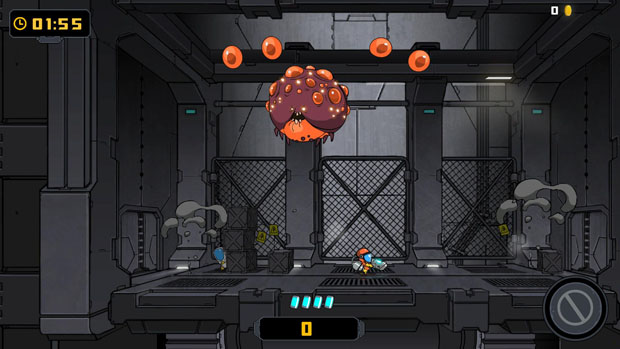 The bugs come in from all different angles from around the room and have specific attack patterns. Some will shoot at you in a specific direction, some will crawl across the ceiling, and others will be bouncing off the ground and walls in arcs. There are many more you’ll find during your time with the game, but this should give you an idea of what to expect.

Each room has different caveats to it as well. Early ones are pretty straight forward, but late on there will be hazards built into them. I liked the one that had jet fire shooting out of the walls! Since the hazards damage the bugs as well, I tried to time things to keep myself safe while doing more damage to the bugs with the jet fire. 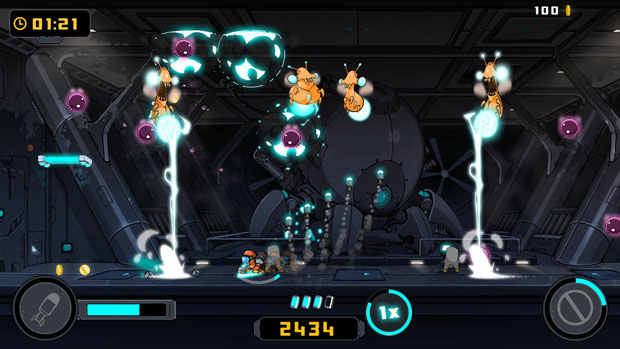 Like all the great arcade shooters from the 90’s this one has tons of power-ups for your weapons – be that quickfire mode, lasers, missiles blasts, flamethrower, or even freezing all of the enemies on the screen!

As you play each level you also earn coins which you can spend on yourself and your weapons to make them stronger. You can improve weapons by increasing things such as fire rate, ammo clip, accuracy and more so that you can quickly exterminate all bugs on the screen.

The game controls perfectly, and as you get good, you actually can start combo your kills to get higher scores as you chase your friends on the leaderboards. I was impressed with the smooth control and the seamless transitions from weapon to weapon. If I got hurt while playing I knew it was my fault because I made a mistake. 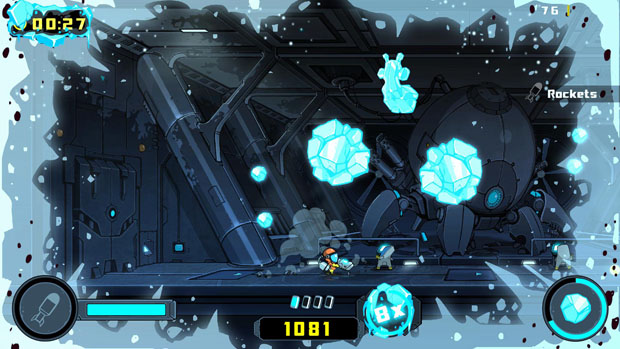 The Bug Butcher is a great release that pays homage to the arcade-style games of ages past. It controls perfectly, offers a ton of great weapons, and lots of replayablitly. The game is perfect for both short burst of gaming as well as for longer sessions, making it a must-have for your PlayStation 4.

Disclaimer
This The Bug Butcher review is based on a PS4 copy provided by Triangle Studios.

PS4Blog.net Is Now On OpenCritic!