Knee Deep is a choice-based adventure game from Prologue Games and Wales Interactive. At its core, it’s a take on the classic “whodunit” stories from way back in the day. It is now available to us on PS4 as one of the best adventure games on Sony’s console. Come read our Knee Deep review to learn why!


Knee Deep is set in the fictional town of Cypress Knee, Florida. From the moment I began to play the game I was grabbed by its story – it is very intriguing and deep. The writing in the game is top-notch which is great news for an adventure game!

There’s plenty of choices for you to make during your time with the game, and every choice you make will end up having an impact on the overall story. This means there are multiple endings in the game since one choice might lead you down a very specific path towards the end. 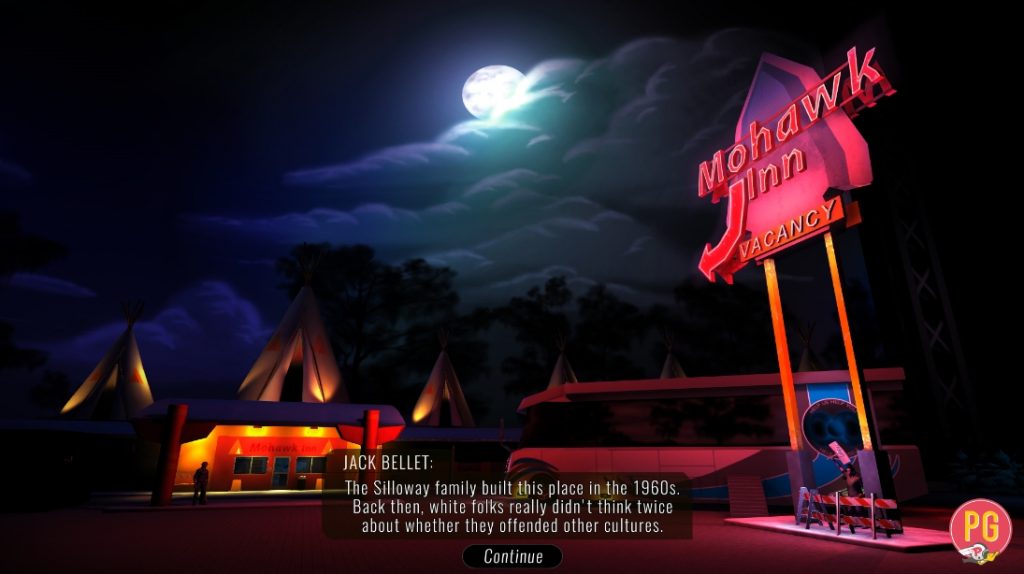 Knee Deep plays out as if it was a live theater performance, complete with curtains, orchestral music and, of course, an audience. As the curtains draw, you do feel as if you were sitting down to absorb the striking performance of a professional group of stage performers. It’s a very nice touch, and something that sets the game apart from other entries in the genre. 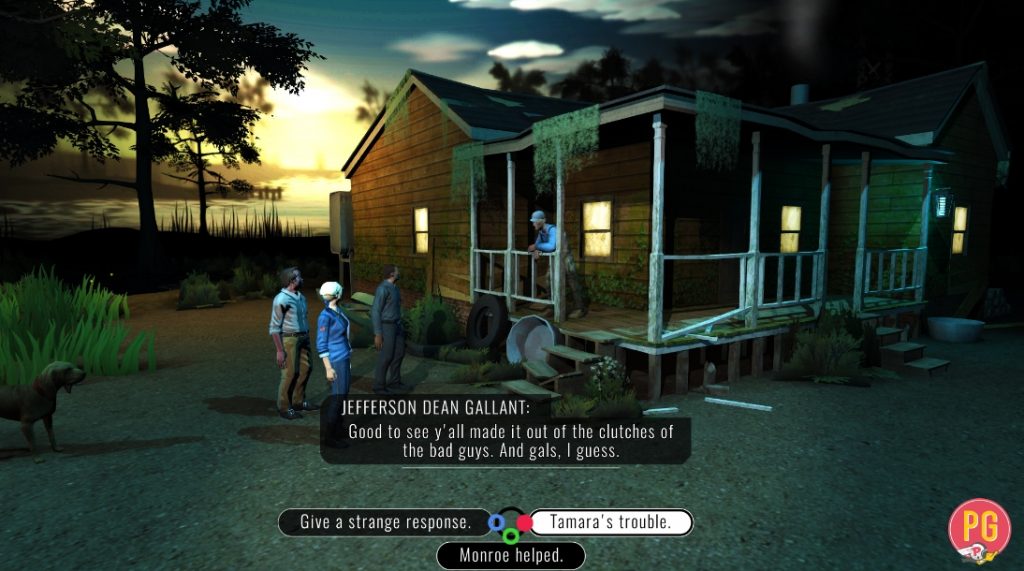 The story is about the apparent suicide of actor Tag Kern. But is there more to this case than the easy way out? There are three characters who come to the small town of Cypress Knee to investigate the case: Romana Teague who is an online blogger for Fanrage and who is looking for a hot scoop; Jack Bellet, a journalist who gets paid on a per report basis; K.C. Gaddis, a very cynical freelance private investigator who was hired by Tag Kern’s studio to investigate the events leading up to the actor’s death. 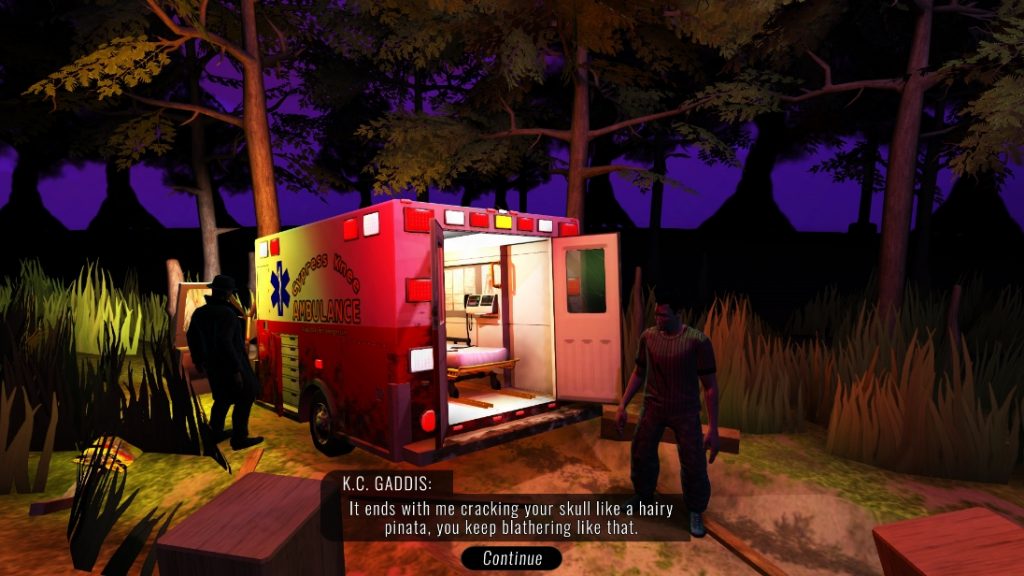 The set design is wonderful. When you go to a new location your character automatically moves onto a circular platform and the set moves and changes in the background. You can literally see it all unfolding and folding, it is really clever and goes along nicely with the presentation.

Over the course of the three acts, each character will investigate Tag Kern’s death by visiting various locations and talking to people who knew Tag. When you approach a character, you have a multiple dialogue choices, and you can use the Square, X, Circle and Triangle buttons to match the color coded choice options.

The game does resemble more a visual novel than a full on point-and-click game (as you can see from the trailer for the and the screens in this Knee Deep review), which isn’t a bad thing. There are plenty of options for you to choose from during each scenario, and you’ll end up reading a ton of text by the time you’re done with the game. 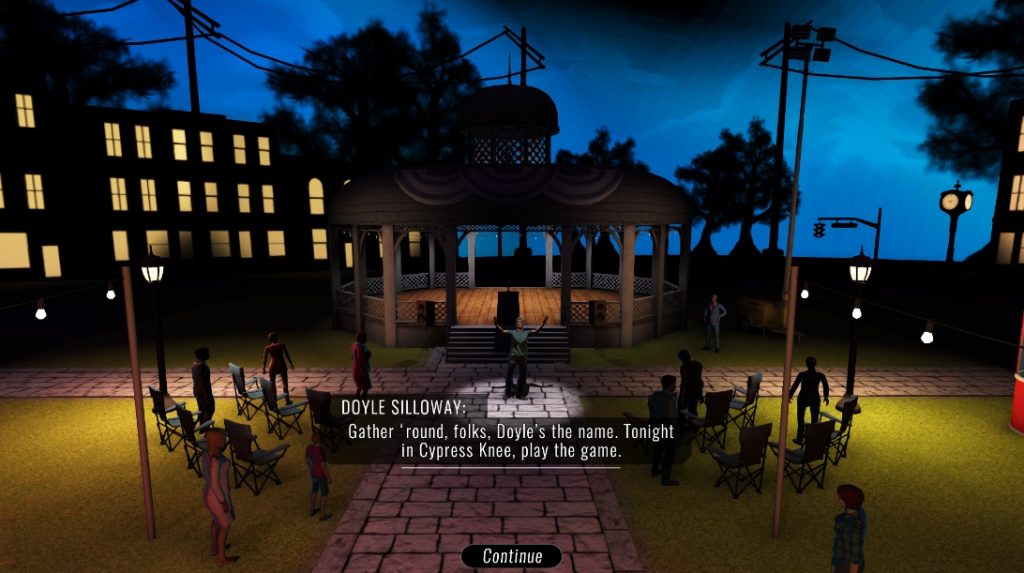 The best thing about Knee Deep is that there is no wrong or right answer to each situation. Every option will be integrated into the game’s story as you move along each scenario, meaning that you can’t technically “fail the game.”

There are some puzzles in the game, but certainly not as many as you’d expect from a full on point and click adventure game. I won’t spoil any of them here, but rest assured that they’re fun and won’t get in the way of you enjoying the game. 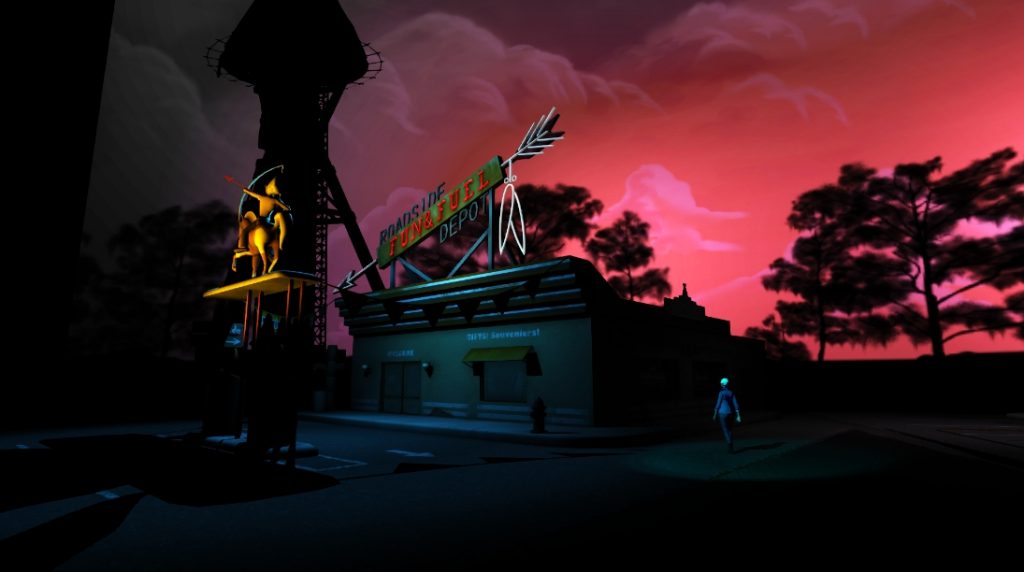 The game feature full voice acting which helps to bring the “performance” of all characters to life. Through all three acts, you’ll get to meet and interact with a colorful cast, and voice acting greatly improves the overall experience.

I’m happy to report that Knee Deep includes a lot of trophies for you to unlock, including a Platinum! There are 44 trophies in total, so yes, there’s a lot of things for you to do in the game, and multiple playthroughs will end up being part of your Platinum trophy run. 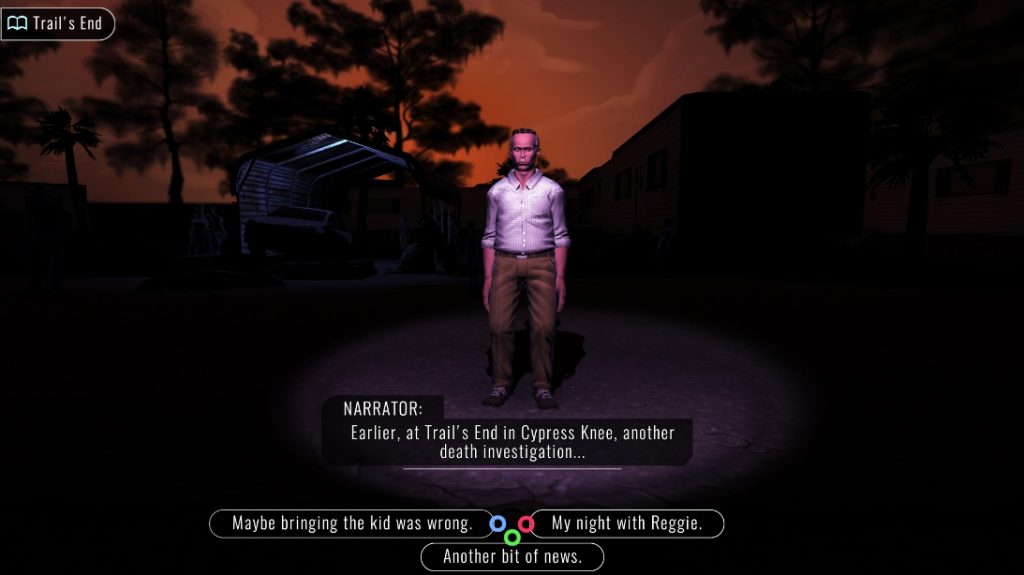 Knee Deep is a very good adventure game with a solid story and plenty of replay value thanks to its multiple endings. Each of the three acts clocks in at roughly two hours, so you’re looking at six hours to complete the game once. I loved the game’s story, setting and presentation, and I highly recommend it to PS4 owners.

Disclaimer
This Knee Deep review is based on a PS4 copy provided by Wales Interactive.

Star Wars Pinball: Rogue One Out Today On PlayStation