Playtonic Games has announced that Kickstarter funded platformer, and now Team17 supported, Yooka-Layle will be making its way to the PlayStation 4 on April 11, 2017! To celebrate, they’ve shared a new trailer you can check below.


Andy Robinson, Communications Director at Playtonic Games, had this to say:

Yooka-Laylee is a love letter to classic platformer-adventure games, from a team comprised of veterans behind genre classics such as the Banjo-Kazooie and Donkey Kong Country games. You can expect huge, beautiful worlds to explore, quirky characters to meet (and beat), a vault-load of collectables, and just the right amount of nonsense puns.

Using an arsenal of special moves, our heroes Yooka (the green one) and Laylee (the wisecracking bat with the big nose) will tackle a huge variety of puzzles and platforming challenges in their search for Pagies, the golden bounty used to unlock — and expand — new worlds, each jammed to the gills with oddball characters, hulking bosses, minecart challenges, arcade games, quiz shows, multiplayer games… and much more! 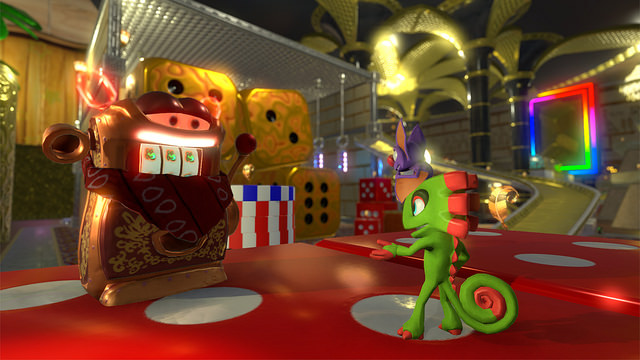 If you pre-order the game you’ll be given access to the Yooka-Laylee PS4 Toybox, a spoiler-free sandbox release that will give you an idea of what to expect when the full game releases next year for Sony’s home console!

What id you think of the new trailer? Are you getting Yooka-Layle for PS4? Let us know in the comments below!