We’re doing a review for Alchemic Jousts (very fun and hectic so far!), so we got in touch with Lunacitc Pixels to talk about the game’s development on PS4.

PS4Blog: Welcome to PS4Blog.net. Could you please introduce yourself to our readers and let them know a bit about your work and role at Lunatic Pixels?

Hi! I’m Dani Garcia, half of Lunatic Pixels. I’m mainly the designer and artist of the team, but since there’s only two of us, I usually have to work on other stuff as well – production, testing, etc. But what I really enjoy is the design and art part.

PS4b: The studio has released Alchemic Jousts for PlayStation 4 in North America and Europe. How would you describe the game to someone who has never heard of it?

We could describe it as a strategy game with cards that is played in real time. You can select up to 12 abilities for each match, all based on the differences between elements and their effects (water beats fire, fire beats earth and so on). You’ll have to choose wisely because there are no random elements while you play – it’s all based on skill.

In the game, you must use the elements to damage the enemy’s tower while you keep your tower from being damaged. You do this with a wide variety of spells and enchantments that must be cast at the best time possible to maximize their potential.

There’s also several game modes to choose, from playing on your own to enjoying two player matches (either locally or online). There’s also the mixing system that will reward you with new skills for your new matches. For example, if you combine water and fire you’ll unlock a new skill which can then, in turn, be combined with other elements and so on. 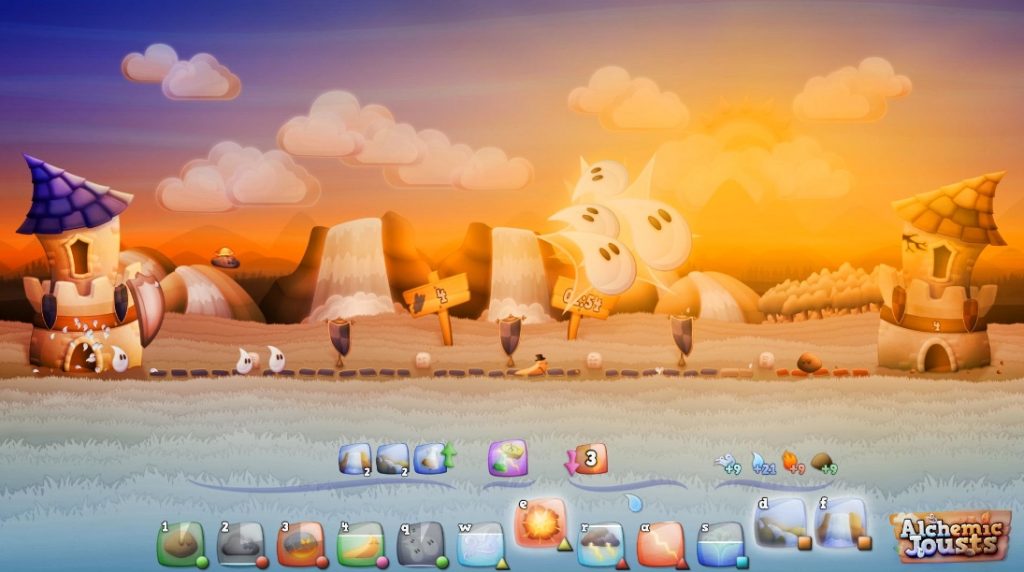 PS4B: The game sounds like an easy to play but hard to master release. There are certainly plenty of skills to use in Alchemic Jousts so that players can find the right mix for defeating their opponents. How many skills are there in total in the game and how did you end up with that specific number?

Indeed. The base mechanics are simple, but the almost infinite number of combinations for using skills in the game will be the real challenge to master. The game starts you with only four skills and by combining them you can discover 182 new skills. Out of those, you can select 75 for your matches, and the rest are passive skills or another type of skills, so that once you discover them, they will be available for subsequent matches.

The total number of skills was not something we decided on doing at first – we just added new ones as we came up with them. It got to a point when we were happy with the variety and 75 seemed like a good and solid number, so we locked it down to that. Then we worked on the rest until we hit 182 since they were what we needed to include all the passive skills we had in mind. 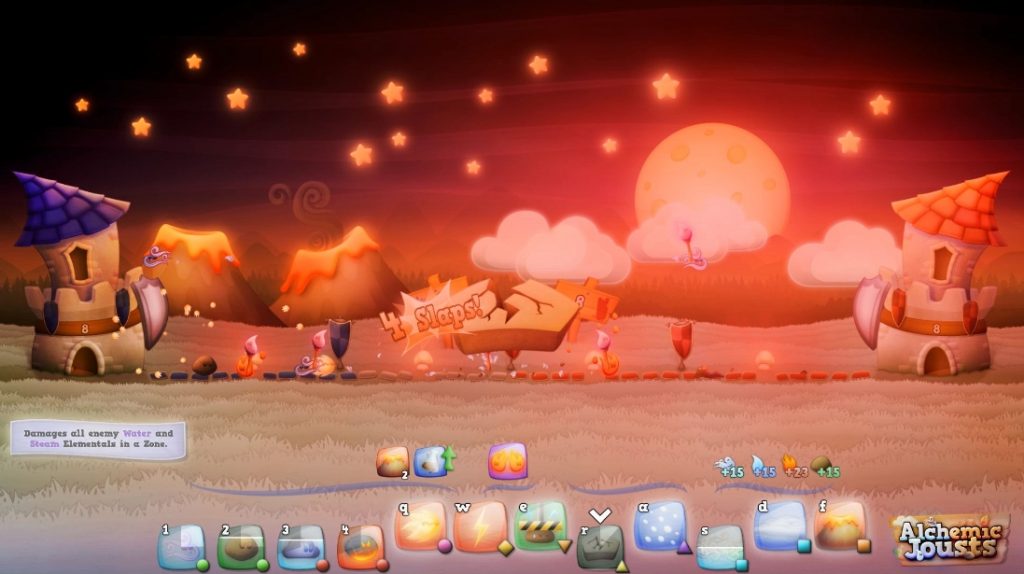 PS4B: How long did you work on the game? Was there any challenge or struggle you ran into during the development of the PS4 version?

It’s taken us around two years because both of us have another job on top of this one, so we had to work on the game during any free time we had. The PlayStation 4 was indeed a challenge since we didn’t decide to work on it until August! We initially thought we should only release the game on PC, but we managed to join Sony’s Playstation Talents project in Spain – opportunity too good to pass up. The challenge was due to the short schedule on which we had to complete the PlayStation 4 version, from adapting the graphics, controls and other game elements to completing all the necessary paperwork and processes to be able to release the game. It was hard for us, but in the end, we managed to release the game on time which made us very happy. 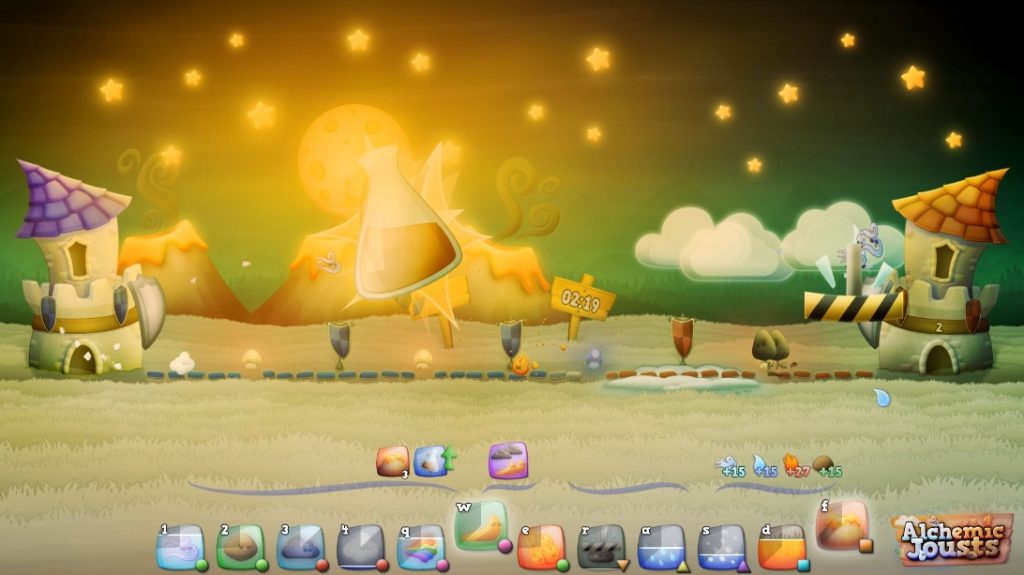 PS4B: The game has a Platinum trophy and a great variety of objectives to complete to unlock it. How many hours would it take someone on average to secure all trophies? Is there a particular trophy that requires a bit of extra attention or effort to secure it?

There’s definitely a lot to do in the game! We have plenty of content considering all the skills you’ll be able to discover, the main campaign, Elite matches, the multiplayer mode and more! We have trophies to reward players for each aspect of the game they conquer, and conquer they must. It’s certainly a big challenge!

I think the hardest trophy in the lot is the aptly named “That’s impossible!” since it requires you generate a specific amount of resources that, at first, will truly seem impossible. But with the skills you can unlock and by using them at the right place and the right time, you can certainly unlock this trophy. So, good luck with that! 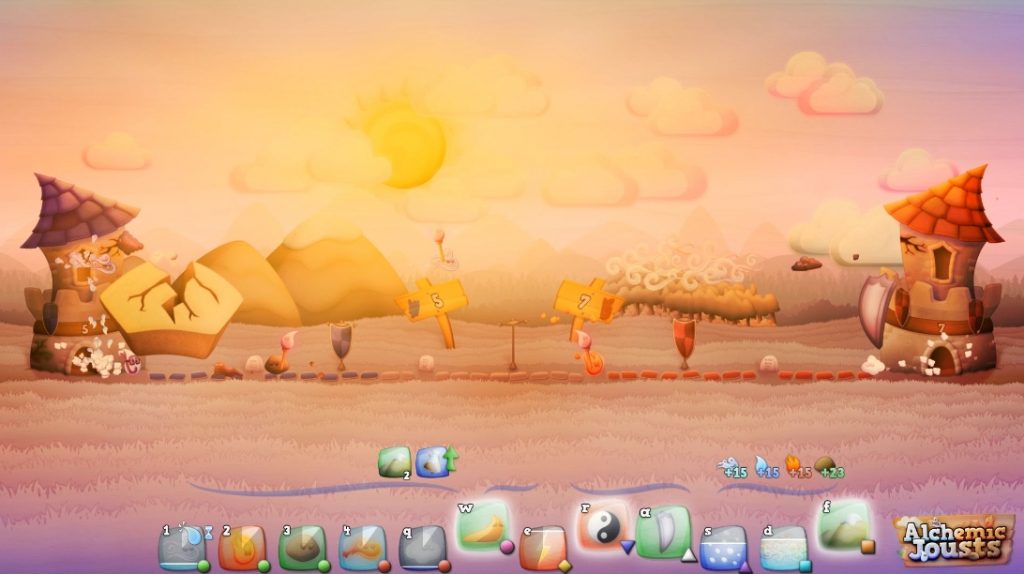 PS4B: Now that Alchemic Jousts is available for Sony’s home console, what is the studio currently working on?

We’ve recently completed the PC version for Alchemic Jousts, and after taking a short break, we’ll consider if we should port the game to release it for new systems. We also have some game ideas we’re very thrilled about, and we’ll start to prototype those soon. 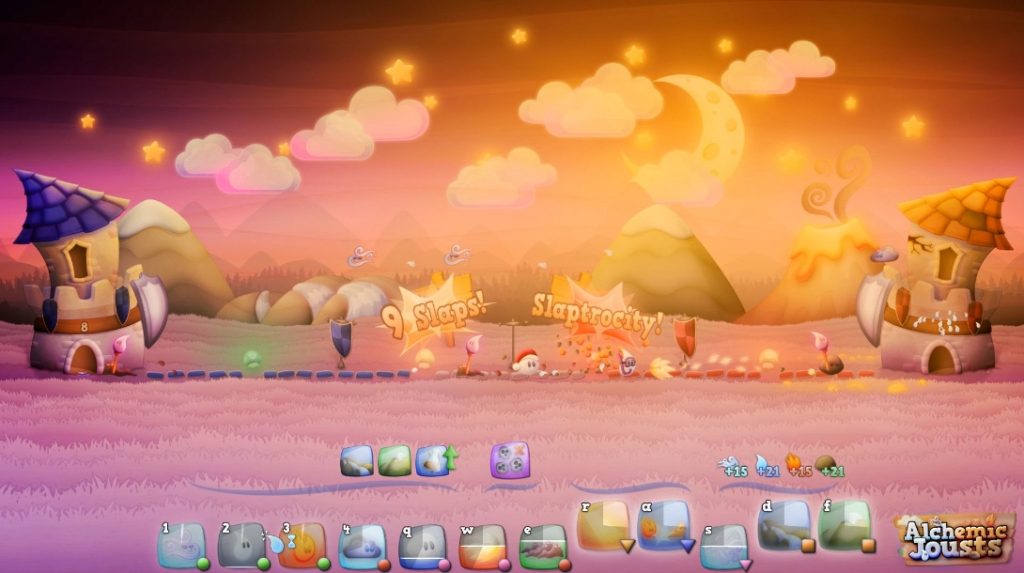 PS4B: Thank you for your time. Would you like to add anything else before we end this interview?

That’s a tricky question! I could stay here for hours talking more about the game, but I’ll guess I’ll have to keep this brief! First, we want to thank you for the interview and for taking the time to talk to us. As for what else I’d like to add, I’ll say that we’ve worked hard to create a game that can offer dozens of hours of fun, with a difficulty system that makes it possible for both experienced and novice gamers to enjoy this game. I’d like to encourage your readers to try Alchemic Jousts so that they can become the best Alchemists out there!