Mother Russia Bleeds is a 2D beat ’em up set in an alternate world’s Soviet Union. Four Romany Gypsy street fighters are rounded up, arrested and thrown in a Russian jail. They are drugged by the Russian Mafia with a new experimental drug called Nekro which then turns them into super fighters. Once they break out of prison, they begin street fighting to pay for their own supply of Nekro, as they have quickly become addicted. Want to learn more? Then read our Mother Russia Bleeds review!


Mother Russia Bleeds is a very violent brawler with local co-op for up to four players. You can choose between Easy, Normal or Hardcore difficulty before you begin playing this 2D 16-Bit retro looking game. If you’re a fan of old-school games such as Streets of Rage or Final Fight, then you’ll feel right at home.

Combat is simple but very brutal, which matches the theme of the game. You can kick, punch, grab and throw your enemies, and you’re up against the worst of lowlifes – rapists, drug dealers, the Russian Mafia! The scenes during gameplay are pretty graphic and represent the horror that took place way back n the day – there’s tons of blood and gore, with brains spilling all over the floor. 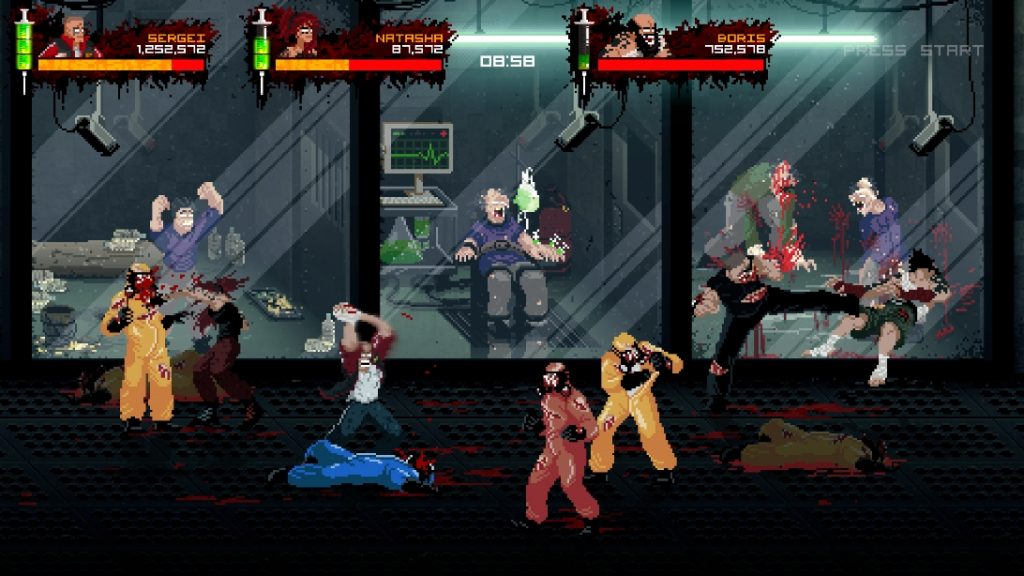 Mother Russia Bleeds offers a unique mechanic in the form of its drug system, which will add some strategy to the game. The default drug that you start out with you can use to heal yourself or to activate the berserk mode. You can obtain refills from downed enemies by pressing the L1 button. You can also unlock other drugs Arena mode. Each new one is a different color, and it offers a new effect, so they’re definitely worth unlocking.

Mother Russia Bleeds has two modes. The first one is Story mode where you can play through all eight levels. It’s fairly challenging but comfortable on Normal difficulty, but the challenge soon ramps up after the first three levels. 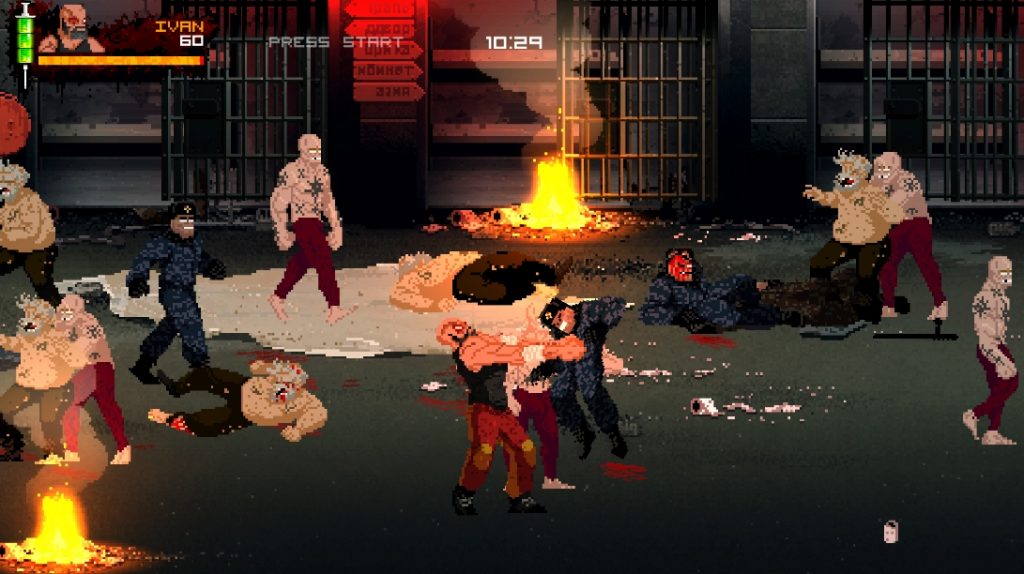 The second one is Arena mode which is a wave-based mode. There are nine levels and playing through these levels will unlock new drugs to enhance your gameplay in Story mode. You will have to defeat wave after wave of enemies, and if you thought Story mode was though, Arena mode will completely destroy you.

The game provides ample challenge and replayability especially if you want to chase for the best high scores. The only real issue I encountered was the hit detection seemed to be a tiny bit off. Other than that, this is a great 2D brawler with plenty of things to do – it is a great homage to the 2D brawlers of ages past. 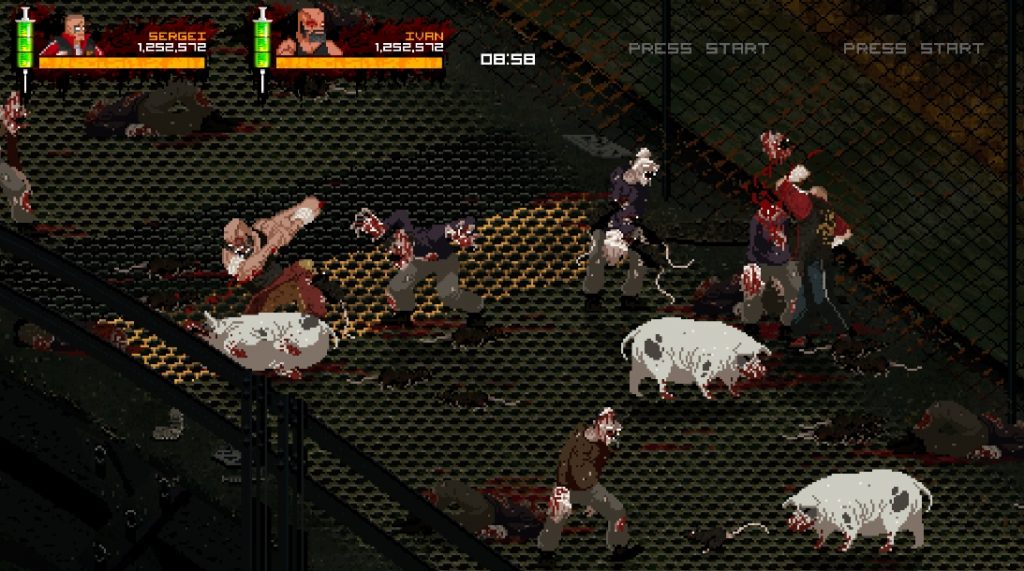 Mother Russia Bleeds has a full trophy count including a Platinum trophy, and it is a very hard one to achieve! You need to complete the game in Hardcore mode, don’t take any hits… and the speed run trophies! I won’t spoil things, but rest assured you’ll be working hard to get all trophies for this one!

If you’re looking for a 21st century take on the beat ’em up genre then look no further – Mother Russia Bleeds is exactly the game you need! Sure, the violence and gore might not be for everyone, but the gameplay is fun and entertaining, and in the end, that’s all you really want from a game. Be sure to give this one a go and let us know in the comments what you thought about your time with the game! 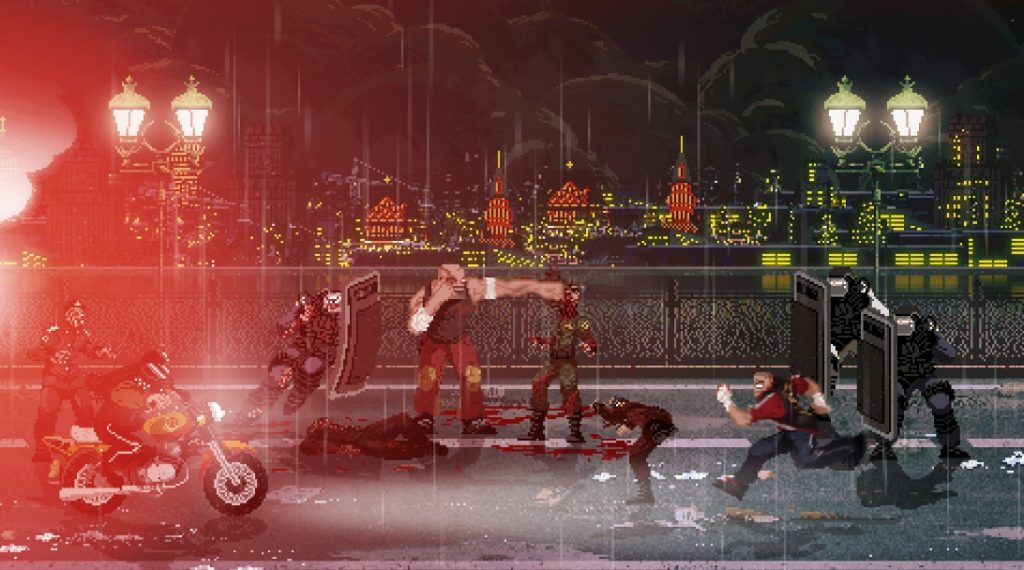 Disclaimer
This Mother Russia Bleeds review is based on a PS4 copy provided by Devolver Digital.

PS4Blog.net’s Slot Machine is Back!