Demetrios: The BIG Cynical Adventure is a point & click adventure game that originally started as a Kickstarter last November and successfully funded past its 2,500 euros base goal. Even though the PlayStation 4 and PS Vita were initially stretch goals, that were unfortunately not reached, COWCAT decided to release the game on the PS Vita. Is the game one you have to play on Sony’s portable? Read our Demetrios: The BIG Cynical Adventure review to find out!

This is a double review for the Vita version of Demetrios: The BIG Cynical Adventure. The game was played by Tracey and Ceidz. This review presents what they both had to say.

In Demetrios, you play a slob named Bjorn Thoren who runs an antique store. His main work consists of selling things that have been discarded by museums because they either didn’t want them or were fake. The story begins as Bjorn is burgled one night and a statue containing an engraved tablet is stolen. Bjorn is unfortunately knocked out in the process. This event sets Bjorn out on a mission to get the statue back. But how will he do it? Does he manage to get the statue and the tablet back?

The characters met in the various locations are all lazy, stupid or rude people – this fits the theme with Bjorn being a pretty lazy lad as well. Speaking of which, it’s made pretty clear through the game that Bjorn is a disgusting loser – but given the theme of the game it all works out in the end. The things he says and does are the complete opposite of what we would say and do in real life!

One of the aspect I preferred about this one was its “toilet humor,” which was actually funny. I won’t go into detail here because it’s gross and certainly not for every audience, but I did like it. One of the aspect everyone will like though is how it can be either disabled or diluted. If you want to play the game without that type of humor, there’s an option included just for you! 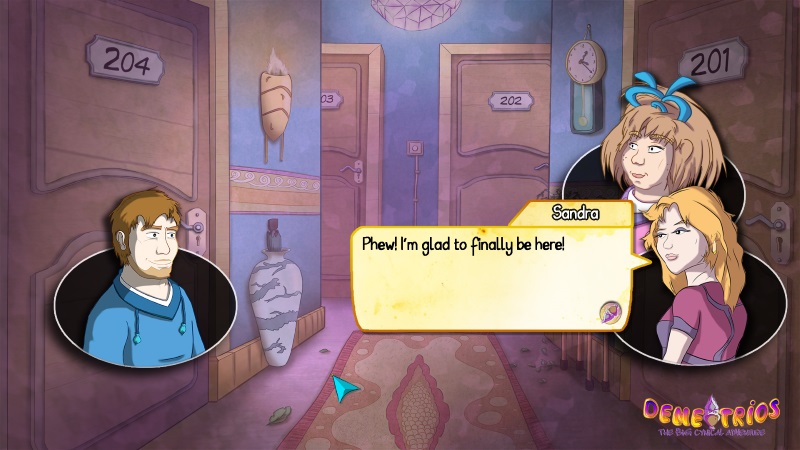 As Demetrios is a point & click game, I was expecting plenty of puzzles and, thankfully, they feel right for the genre. For instance, when items are collected, they are automatically placed in your inventory. You can then examine and combine items to create new items – you’ll need them to solve puzzles. Most of them aren’t difficult and you can often backtrack to a previously visited area.

One of the things I liked was the built-in hint system which works on cookies placed over the world (three are hidden in each location). When stuck, you can “consume” a cookie to help you towards the next solution. There is a trophy that can be attained by completing the game without using any hints, but I have to be honest: I did need some cookies at some points in the game, so I’ve locked my save from that trophy – guess I’ll have to replay the game to get all trophies!

Demetrios also contains many collectibles, such as a bunch of game over screens! In fact, it’s not a “game over” in the purest gaming sense. It is various random actions generating one of the “game over” screens in the game – there’s 68 in total, so happy hunting! There are no real consequences to triggering them since you’ll just go back to the step you were on just before triggering it, so be sure to experiment as much as possible.

I liked the humor of the game, and I was glad I was able to tone the “toilet humor” down a little as the full version of it was just too much for me. The presentation of this game is impressive, and each location is hand-drawn with beautiful art. One of the other aspects that surprised me is how big this adventure really! This is even more surprising considering it was all made by one person. Demetrios clocks in at around 10 hours of gameplay! 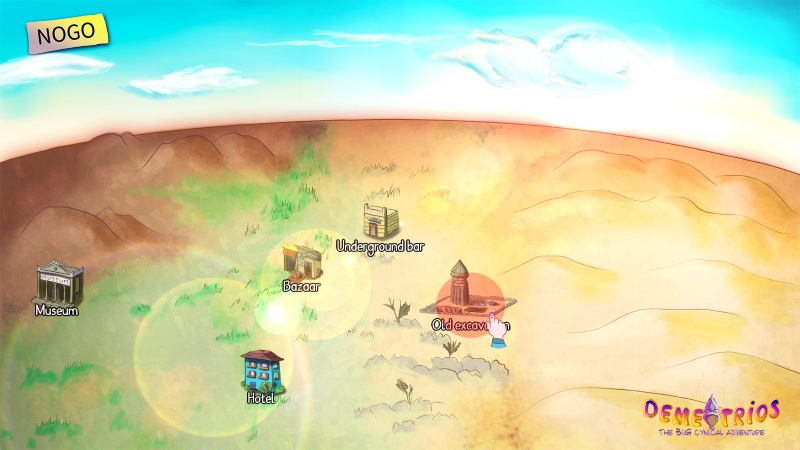 Final Thoughts
Demetrios: The BIG Cynical Adventure is a fun game to play. The humor was top-notch, and it has a lot of replay value if you plan on getting all the game over collectibles. The game even features a Platinum Trophy which will certainly please many gamers. Overall, the game is worth your time and money. The graphics are easy on the eye and very polished. The music is also upbeat and fits the general tone of the game.

You can purchase Demetrios: The BIG Cynical Adventure on the PSN.

Disclaimer
This Demetrios: The BIG Cynical Adventure Review is based on Vita copies provided by Cowcat Games.