Are you a fan of the Neptunia series? We’ve reviewed every game and spin-off from the series at PS3blog.net and PS4blog.net, so when Idea Factory International got in touch with us to talk about Superdimension Neptune VS Sega Hard Girls you can bet we were ready to take the game for a spin. Want to learn if this is a game you should buy or avoid? Come read our Superdimension Neptune VS Sega Hard Girls review to find out!


This is a double review for the Vita versions of Superdimension Neptune VS Sega Hard Girls. The game was played on Vita by EdEN and by Ceidz. This review presents what they both had to say.

I have played (and reviewed!) almost every PlayStation Vita release of the Hyperdimension Neptunia franchise since it released on the Vita a few years ago, so my review has some experience on the matter. The first thing I noticed is how it is similar to previous entries, but still added a few new features to the true-and-tried battle system we’ve seen in every older entry of the franchise. 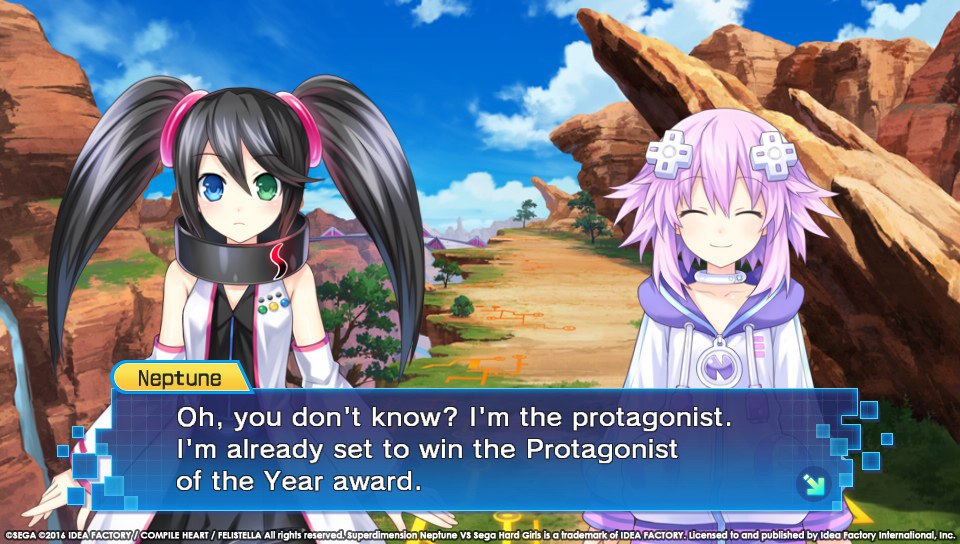 The battle system is pretty much identical to the ones found in Re;Birth 1 to 3. If you haven’t played previous installments, the battle system is turn-based (in a similar fashion as Final Fantasy X). You can select attacks or skills as long as you are in your green zone (which acts like stamina for each turn). Doing more attacks raises the bar and if you reach the red zone, you’ll have to wait more time before the next round. There is also a new feature which feels like an overdrive mode for the characters and unleashing it certainly helped me during boss fights. 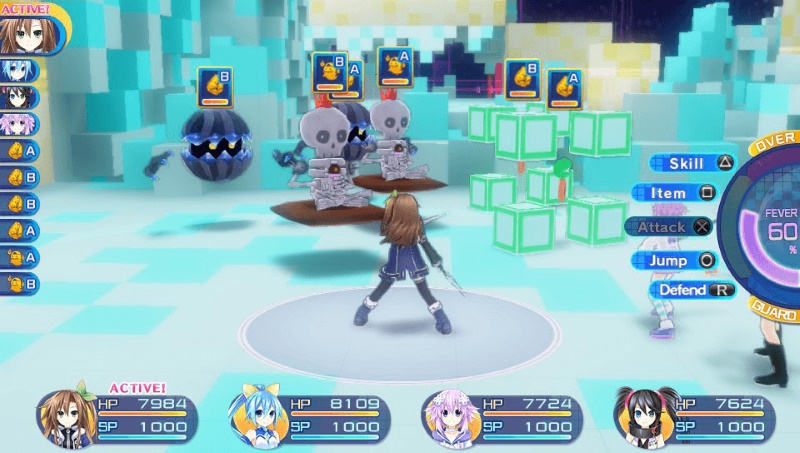 The first thing that I noticed is that the frame rate was not stable and would often drop below 30 FPS, both in battles and on the field. Given that this is far from being the first Vita release for the franchise, I thought that those issues should’ve been fixed by now. Superdimension Neptune VS Sega Hard Girls even uses the a Vita feature which allows the game to cut the network and the possibility to launch other apps in order to draw some extra processing power, but that didn’t help with the game’s fluidity. 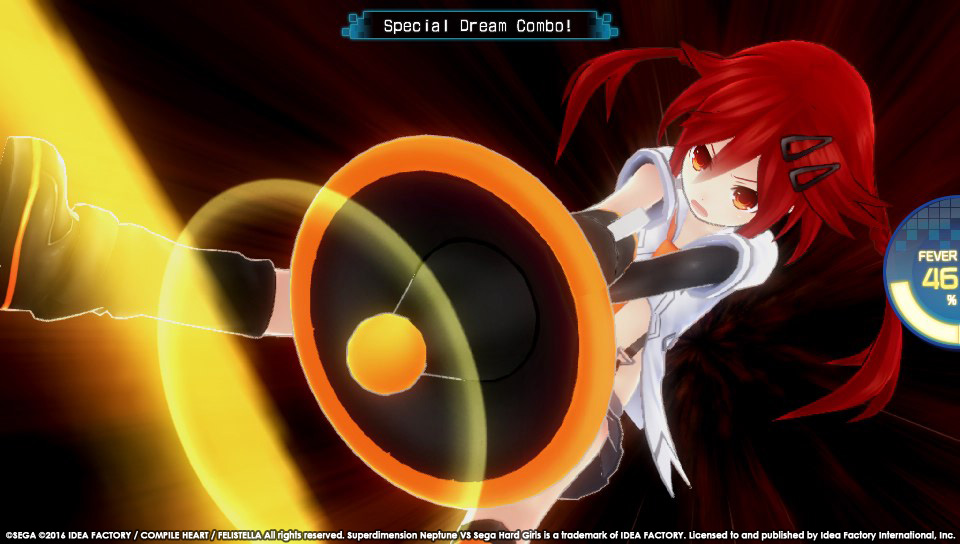 Most of the soundtrack and environments have been taken from previous Hyperdimension games, making this feel as an extension of previous entries in the long-running and colorful franchise. If more Hyperdimension goodness is what you wanted, then that’s certainly what you’ll be getting for this one. EdEN will be explaining to you why this makes sense for this particular game.

I loved this game. The framerate drops are noticeable but not a deal-breaker, and if you’re a fan of the Hyperdimension series (and it’s spin-offs), then you’re going to love this one. With that out of the way, let’s dive into why the game reuses assets from previous games in the franchise!

The game starts with IF riding her bike through the desert as the game cuts every few seconds to a fight between the Goddesses and the Sega Hard Girls. She is searching for a mysterious library that is said to hold the entire history of everything. Upon arriving there, she finds Histoire, the keeper of the library. After moving the story along a bit, you find someone has attacked the library, stealing part of history in the process! 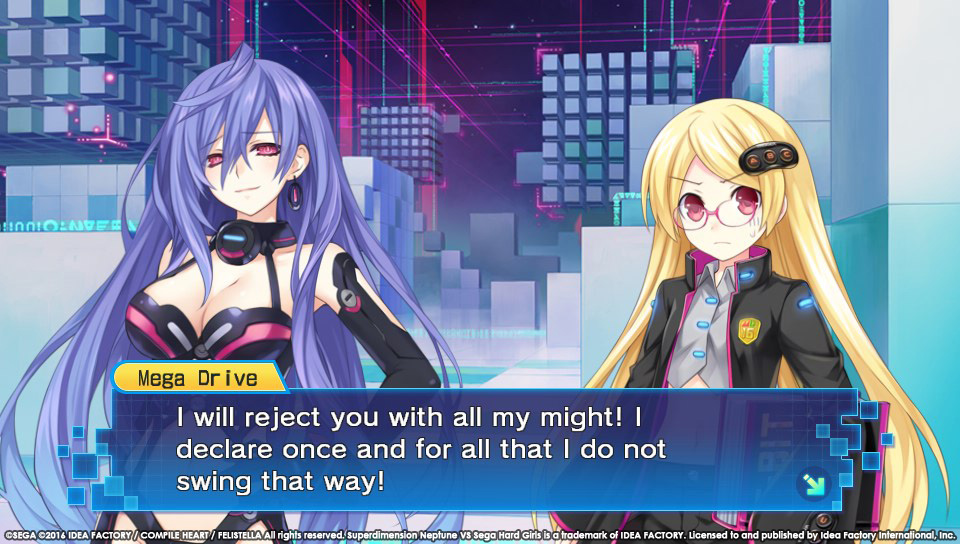 Fortunately, Histoire mentions that the library has been designed to locate missing parts of history in order to fix them before it is too late – if too much history is gone, then it can’t be repaired and things will start to go Back to the Future picture of Marty’s family. IF therefore sets out on a journey through time in order to find the culprit and fix things before it is too late. This is why you’ll go through time thanks to IF’s modified bike – a bike that is actually Neptune – and why you’ll run into enemies and locations you have already visited in previous games. But the story is brand new and the English voice work is great, bringing to life a new tale in this quirky universe that pokes fun of the gaming industry as a whole.

Since this might be your first game in the series, Histoire will kindly give you some pointers as to what to do and how the game works. In fact, the entire opening stage functions as a big extended tutorial location where you’ll learn many of the basics you’ll need for exploring each dungeon as the experienced and strong adventurer you are.

For example, she’ll tell you about events in dungeons. You’ll see them as shinny crystals, and they can either trigger story moments or also include a battle with a set of enemies or even a mighty boss. As you explore a dungeon you’ll also find treasure chests with goodies, breakable objects and the very important save points. In dungeons you can only save your game at save points, so always save as soon as you find one! 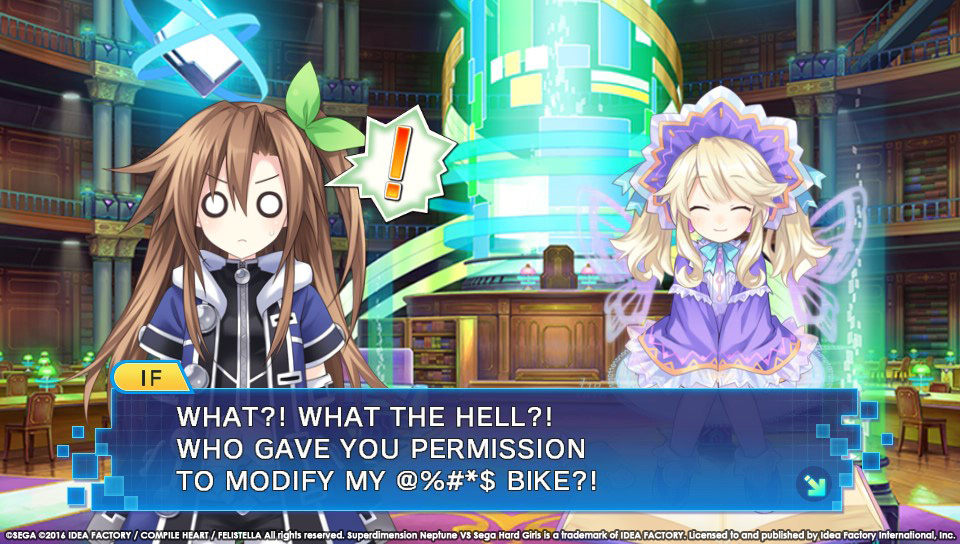 You’ll also find spots you can climb and ropes you can use to move from point A to point B. There’s also a very handy dash skill activated with the R button, and you can use this to quickly move around each location, as well as to give you enough momentum to do a dash jump to clear longer gaps. There’s also spots where you will need to crawl to reach a new area.

A fun element in the game is the medals and baseballs you’ll find during your adventure. Medals convert to credits, and if you get all medals in a dungeon you’ll be rewarded with a golden crown. Baseballs will, for some reason, allow you to stock key items – find the baseball’s owner and you’ll be rewarded! 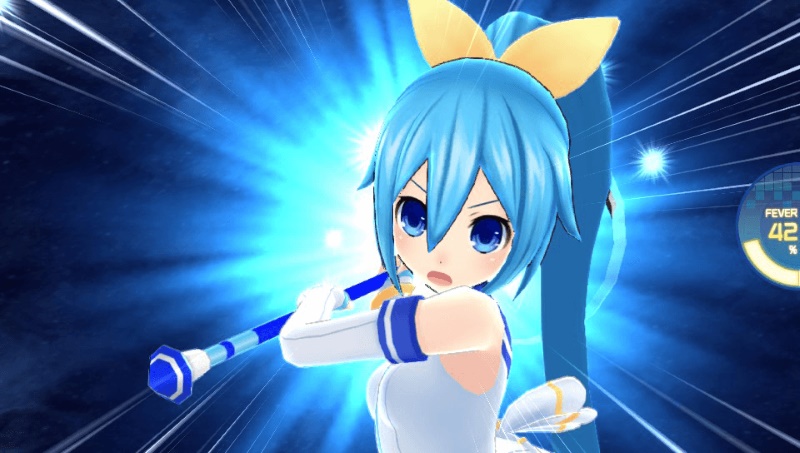 Final Thoughts
We liked playing Superdimension Neptune VS Sega Hard Girls for its story and gameplay. Having the game reuse some assets from previous releases might rub some of you the wrong way, but don’t let that keep you from playing this fun portable release. And if you’re completely new to the franchise, this is an excellent jumping point since gameplay has been refined and the formula has perfected considerably. 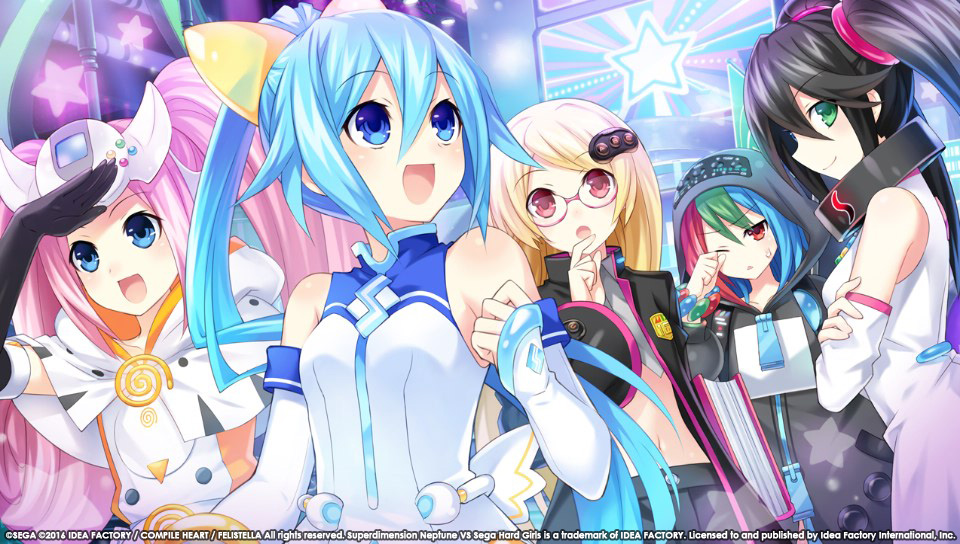 You can purchase Superdimension Neptune VS Sega Hard Girls from the PSN.

Disclaimer
This Superdimension Neptune VS Sega Hard Girls review is based on Vita copies provided by Idea Factory International. 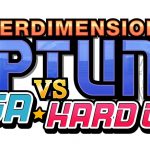