From the pages of A-Force and Champions come the new Zen Pinball 2 pinball tables in partnership with Marvel! This double pack focuses on the women of Marvel, and it’s about time! Check out our Marvel’s Women of Power review for it.

Combining a plethora of stellar female Super Heroes from the Marvel Universe, the Marvel’s Women of Power two-pack combines two tables starring Ms. Marvel, Black Widow and more! Defeat Bombshell with Ms. Marvel and friends in Champions, and wage an epic battle in an alternate reality in the A-Force table!
Pack Features:
– The A-Force table features an all-new storyline where the destruction of a Cosmic Cube has formed a Soviet-controlled alternate reality
– In Champions, help Ms. Marvel and her friends as she takes on Bombshell following a daring bank robbery
– On the A-Force table, keep the Cosmic Cube balls alive in the table’s Wizard Mode by directly controlling Black Widow and Madame Masque
– Dispatch Squirrel Girl’s “squirrel army” in search of the criminal’s tracks and utilize Spider-Gwen’s webbing to incapacitate your enemies on the Champions table

Zen Studios is back with two new pinball tables. This pair of tables features teams of women from the Marvel Universe including the A-Force and Champions. I don’t really follow Marvel comics heavily, but A-Force focuses on the older more established heroes, while Champions is the group of younger up and comers.

Let’s talk about the A-Force table first. Right off the bat, I was blown away with the introduction that has both Black Widow and Madame Masque falling out of the sky, fighting over a cosmic cube. When Madame Masque gets a hold of it, Black Widow shoots it and destroys it. Unfortunately, this creates a reality where America lost to Russia, and now New York is overtaken by the Soviets. 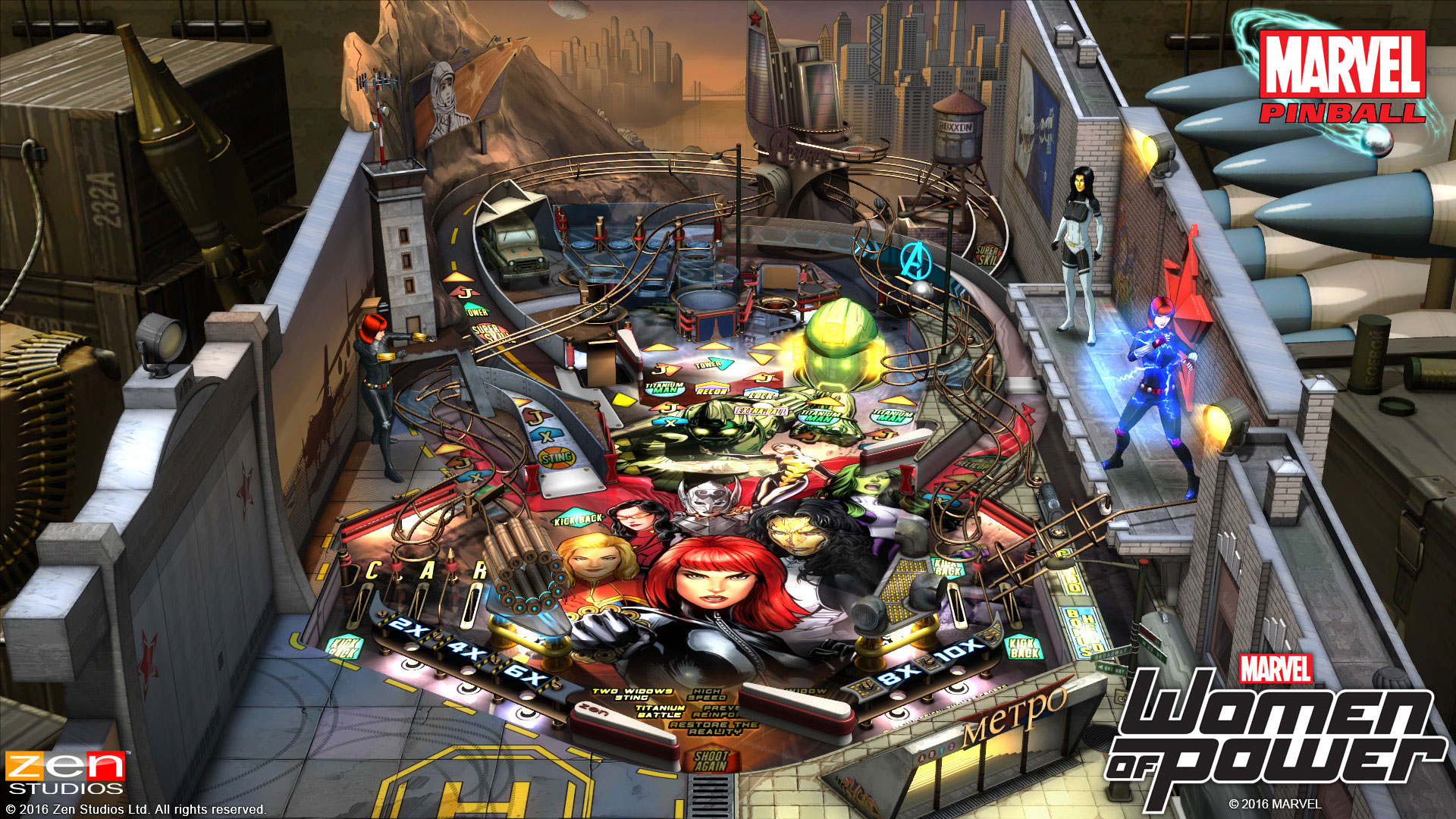 The pinball table, as usual, looks great. It features some solid level design. Black Widow and Madame Masque are often seen working together or dueling depending on what is going on. Other heroes featured on the table are Thor (Jane Foster), She-Hulk, Wasp, and Captain Marvel. The goal of the table is to attempt to recruit as many heroes as you can by hitting the spinner. You then recruit a new member by hitting the hole. Once you have all of them, you can maybe fix reality.

It’s a fun table that makes great use of the scene and the concept. The banter between Black Widow and Madame Masque is fun. The ramps make it easy to send the ball flying all over the place, but in a good way. Unlike a lot of the other tables I have played, this one didn’t have a mini table, which was a surprise.

Now for the Champions table. It stars Miss Marvel as she tracks down Bombshell whom just robbed a bank and stole Miss Marvel’s coffee shop money as well on the way to the bank. Quick setup to get this one going, huh?

First off I want to want to say how cool it is to have a table where Squirrel Girl and Sister Grimm (Nico Minoru) are featured. While I haven’t read a lot about Squirrel Girl, her reputation precedes her. Also, Runaways is one of my favorite titles ever, so when the original cast members get featured in anything, I am certainly interested.

Miss Marvel is in the middle of the table most of the time, using her powers on the board. Depending on what you do she interacts with the table in different ways, including fighting Bombshell. It’s pretty cool and a neat use of her powers. The launcher for the table is actually a cash register that she stretches and sets off. 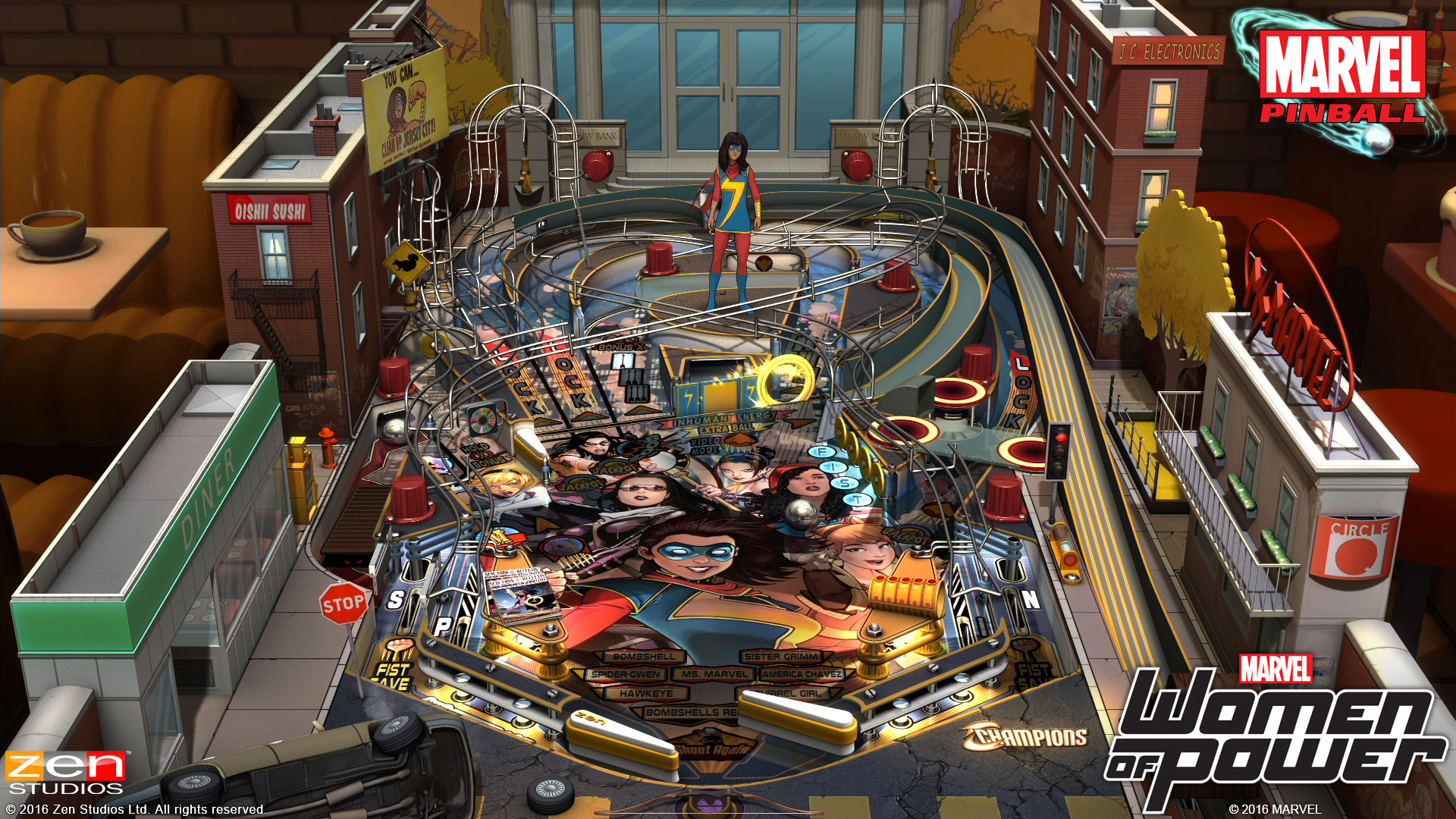 Along with playing on the big screen, I did play both tables on the PS Vita version of the game to check them out and I saw no issues or big differences from the PS4 version – you know, other than the visuals which, as expected, look sharper on the PS4.

Another strong entry from the creators of Zen Pinball. I really did enjoy the Champions table, and a lot of the younger heroes featured in it, but I was blown away by the opening and the table for A-Force as well. If you enjoy pinball or the women in the Marvel universe, then there is a lot to like featured in this table. As you can tell from my Marvel’s Women of Power review, this is a must-have release.

Disclaimer
This Zen Pinball 2: Marvel’s Women of Power review is based on a PS4 copy provided by Zen Studios. 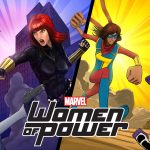