Kill Strain is a free to play game which I played and helped the developers with during the BETA tests. Here are my impressions on this F2P release. Since it was recently released on Playstation, I thought it would be a good time to do a Kill Strain review.

Kill Strain is an online PvP experience that pits three teams against one another under uniquely dynamic circumstances. Composed of two teams of four Mercenaries, and one team of two Mutants. As the match progresses mutants not only have the ability to spread the strain, but will also gain the ability to turn the human combatants — resulting in the team sizes shifting.

On paper, Kill Strain describes itself as an “asymmetrical top down twin stick MOBA-ish game” having two human “Merc” teams and one “mutant” team. Each human team has four players while mutants start off with only two players. The objective of the game is to destroy either the strain source or the opposing human’s “drop ship.”

The MOBA aspect of the game is prevalent from the top down view just like any other typical MOBA games, but it uses the Dualshock 4’s twin sticks to aim and move your character around. Kill Strain differentiates itself from MOBA’s by having no minion type characters or in match purchasable items. Before a match starts, you must choose a human player and a mutant player.

Starting mutant players have the ability to turn other human players into Mutants. As a human, if you are killed and the Mutants “turn meter” is full, he can drag you to the strain and turn you, effectively changing your character throughout the entire match. Humans also have called “Mechs” that you can activate by filling your Mech Meter. Your meter is increased by accomplishing in-game objectives.

You can also purchase items such as augments and masteries through the marketplace menu before you queue up for a match. Right now there are 12 characters to choose from, (nine humans, three mutants) with plans for more to be released in the future. 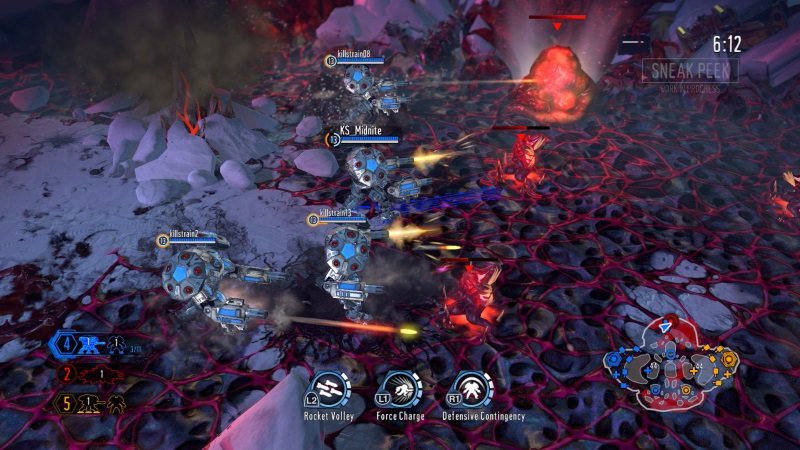 Kill Strain is a free to play game. You can purchase gold with real money to unlock XP boosts or buy characters and character skins, but you can also earn “soft currency” by playing and finishing matches. Typically, a match rewards you with 150 soft currency which you can then save up to buy characters, augments, or mastery items.

The game has been in development for two years with a private access beta (in which I participated!) going on for about one year. Not much has changed from the beta to the final release. The developers tested a 5v2v5 PvP type of clash in the earlier builds, and they then moved to a 4v1v4 model, and now in the final release, they decided on a 4v2v4 PvP model. The game tries to compensate its lack of objectives by issuing daily challenges that annoyingly pop up in.game while you’re in a match until you complete them.

You can pretty much figure out which type is a character by just looking at his/hers design. For instance, if he’s skinny, it’s an Assassin/support, a medium build? Then it’s a damage dealer. Finally, a heavy set means its a tank. The character designs and the abilities are pretty much straight up typical of any MOBA game.

Of course, the basic strategy of this game is to score the most points, but forget what you know about team work since this game is the greediest of the greedy. You can Kill Steal all you want and not worry about your team yelling at you or typing obscenities because there is no in-game chat. There is no party system either, so if you want to be on the same team as your friends, you’re out of luck.

Another issue I see with this game is the griefing. In case you are not familiar with the term, it’s basically assisting an enemy team or friend to gain an edge in the game. I often saw experienced KS players get intentionally turned by mutants so they can leave their human team which is either not doing well, or to simply join the mutants because one of them happens to be their friend. There is no incentive for staying as a human through out the match.

The game also needs to be balanced better. As of writing these lines, healers gain so many points just by healing that it feels ridiculous. The game’s leveling system is very vague. If for some reason your team is minus one human, you automatically gain “level up” trickle to assist your handicap. This is where you really have to pay attention because higher level means higher damage dealt, so even if you have a damage dealer and an underleveled character in-game, you will die.

In addition, I also noticed that even if you are a few levels higher against some players, for some reason the under leveled guy will still do a ton of damage compared to your higher level character, which didn’t make sense. Finally, you can have seven kills and zero deaths and still be in the last place. Why? Because the top players are either experienced mutants or farming points. Once everyone gets to know how to farm points, this game is going to get boring fast. 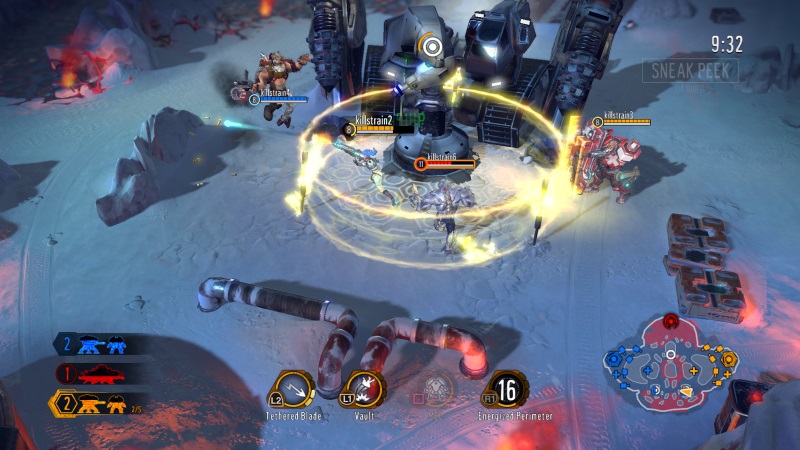 I also noticed that the character abilities themselves felt broken. For example, Katrina’s “invisibility move” is hard to detect unless you’re sitting very close to your screen. Also, her normal attack (using a sniper rifle) deals so much damage that she’s hard to take down in 1v1. Elena’s “energy fence” is also unbreakable, so if you have a character that can’t leap like Diesel, you’re pretty much stuck in there. The mutant character “Reaper” is also overpowered: you can’t 1v1 against him because he does a lot of damage, and when he’s about to lose, he does a disappearing move that is hard to predict.

Even though there’s a tutorial that explains how to play the game, it doesn’t provide enough information to get your team to work as a single unit during a match as most players are pretty much doing what they want to do.

This game would be so much better if it had some type of party system. Right now, every time you join a match, you just have to hope each person knows their roles because if not, you’re pretty much playing on your own.

In the end, your mileage with Kill Strain might vary. Did I have fun? Sometimes when everything click. Is there a lot of changes that need to be implemented into the game? Defintely. Sure, it might not be the best MOBA on PS4, but with a few patches to fix things, this could be so much more. We’ll see what the next couple of months bring for the game.

————————-
Extra Content: Watch me dismantle the Kill Strain Dev team including the games director in this video.