Keep Talking And Nobody Explodes is a new social game that released on Steam last year, and has made its way to PlayStation VR. In this experience, the user wearing the VR helmet must defuse a bomb, which the other players can’t see. He has to describe what he sees and be precise enough so the other players can find the requested information in the set time limit.

Before going any further, we thought that this game made use of the VR helmet in a clever way, and is definitively one of the most original VR games out there! Learn more in our Keep Talking And Nobody Explodes double-review!

This is a double review for the PS VR version of Keep Talking And Nobody Explodes. The game was played by Mathieu and Ceidz. This review presents what they both had to say.

The first time I heard about Keep Talking and Nobody Explodes, I thought it was a weird concept – but it seemed to be a potentially fun experience. I was happy to learn it was available on the PS VR so that I could try it and see for myself.

If you are looking for a good local multiplayer PS VR experience, this is it. Communication is key if you want your team to be able to defuse the bomb in the time limit. Since each bomb contains different modules (a.k.a puzzles) with several variations, the VR player really depends on the non-VR players to help him/her figure out what needs to be done. The VR player can’t improvise even if he/she knows the pattern because there are way too many possibilities that depend on various factors such as the number of batteries, or the last digit of the serial number of the bomb.

The non-VR players have access to the Bomb Defusal Manual on the TV screen while using a second controller, or better yet a printed version of the manual (Spoiler Warning! It’s a lot more fun if you wait until you play to read the manual!).

The Bomb Defusal Manual contains all the solutions for each module, but it can still be a challenge to figure out the solution for each variation. So the non-VR players will feel the stress of having to quickly give the correct instructions to the VR player. This is especially stressing if, say, the VR player keeps shouting “Hurry up! Only 2 minutes left!”

VR would not be necessary for the game to work per se – as long as the bomb defuser has a private screen so the other players can’t see what he sees. But VR makes the player feel more isolated while defusing the bomb. You are also able to look around the room you are located in with the bomb. In later challenges, there are even other objects to interact with, such as a clock that will sound its alarm – you will need to snooze it to better hear your friends’ instructions.

Keep Talking and Nobody Explodes feels a lot like a good cooperative board game, in the vein of Pandemic and Mysterium. If you like this kind of board games or if you significant other likes them, then you should have a blast with this game. 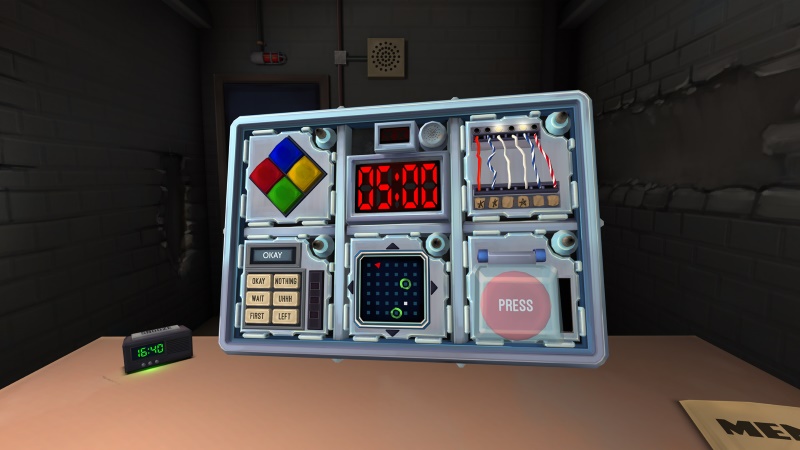 Keep Talking And Nobody Explodes is a very fun social party game in which players must defuse a bomb. Mathieu and I played each role in turns so that we could get a better understanding of what both gameplay mechanics bring to the equation. In fact, this is the aspect that I appreciated the most: this game REQUIRES you to explain yourself perfectly in order to receive help from all other players.

As for the gameplay, it usually goes like this:

One player puts on the VR helmet and enters the crime scene containing a bomb to defuse. Keep in mind that the other players are NOT seeing the actual bomb, so the player wearing the helmet must explain which type of sub-module(s) he sees on the bomb so the other players can find the corresponding page in the manual. So the first step is to figure out which module/puzzle must be defused. Each bomb contains anywhere from three to ten modules at once!

The second step is to answer the questions from the defusing team. Depending on your answers, they’ll tell you which actions must be taken. For instance, they might tell you to cut the blue wire or to press the buttons in a specified order. Then you move to the next module and so on until they’re all defused… or until the bomb explodes.

What I liked the most in this game is how immersive it was. After defusing some bombs (and after several that blew up in our faces), we were really fired up and felt like we could take on the hardest of challenges. As per the game description, this game CAN be played over the phone if your friend is far away but, in my opinion, you’d miss the fun of playing all together in the same place. Also, I loved how the TV screen shows the guide but still outputs the sound effects for, say, cutting the good wire or completing a module, so we still have feedback from the game so we can tell if our suggestion worked. 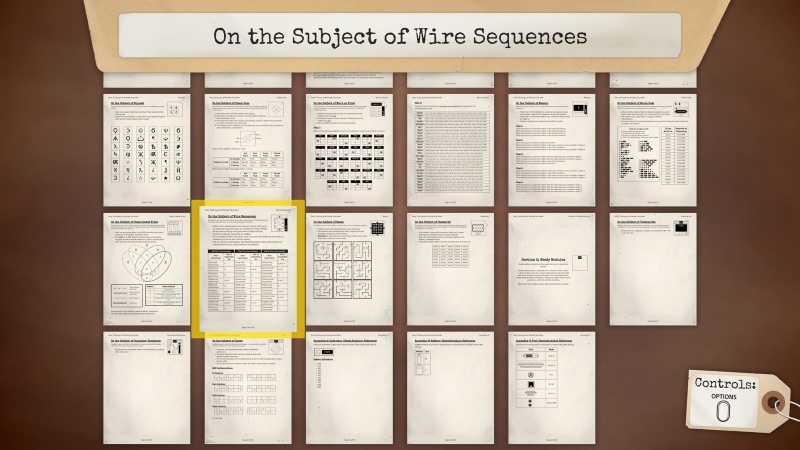 Keep Talking and Nobody Explodes is a great way to showcase your PS VR to family and friends. Everyone in the room can play, even if they don’t usually play video games! There currently aren’t many local multiplayer games available for PS VR. Luckily, this is one of them, and it’s wonderful!

Disclaimer
This Keep Talking And Nobody Explodes review is based on a PS4 copy provided by Steel Crate Games.