We’re currently working on a review for Spider: Rite of the Shrouded Moon, so we got in touch with Tiger Style Games to talk about this release and it’s PlayStation 4 and PS Vita release.

PS4Blog: Welcome to PS4blog.net! Thank you for being here with us today. Could you please get us going by presenting yourself to our readers and telling them a bit about your role at Tiger Style Games?

Hi, this is Randy Smith, creative director and game designer of Tiger Style. I lead the team that does the art, stories, and design of our games. I started my career nearly 20 years ago as a level designer on the Thief series of games back in the 1990’s, and I became the director on the sequel Thief: Deadly Shadows.

I worked at Electronic Arts with Steven Spielberg on a game that never came out before I started Tiger Style in 2008. We released a sci-fi action-adventure called Waking Mars back in 2012. In 2009, we released the precursor to Spider: Rite of the Shrouded Moon – Spider: The Secret of Bryce Manor. That one was much smaller and simpler, but it still won the Mobile Game of the Year at the Indie Game Festival! We’ve been thinking about releasing this new, bigger, fancier version ever since then.

PS4B: It’s been a long road, but Spider: Rite of the Shrouded Moon is finally out on PS4 and Vita! How would you describe the game to someone who has never heard of it?

In Spider: Rite of the Shrouded Moon you play a spider on the hunt for insects. You create webs of your own design with our unique “action drawing” gameplay, but you can’t run out of silk, or you’ll die. There are dozens of insects, and you have to learn their patterns and trap enough of them to proceed to the next level.

You make your way from room to room of an abandoned mansion, and as you go, you’ll slowly start to realize that these environments are full of clues about the family that once lived here and what happened to them. This is a tale told without words that you piece together like a detective, and it’s interesting that you play a character who doesn’t care about this story at all. As a spider, all you can do is leave the place covered in cobwebs.

As a player, you can either focus on the action gameplay or the story and puzzles. Neither of them will block your progress. But don’t get tricked into thinking the game isn’t deep! Just try to master the scoring system well enough to earn Knight rank, or try solving the final, hidden mystery, and you’ll see why Spider has plenty to offer serious gamers. This will be a very competitive game if you choose to play it that way! 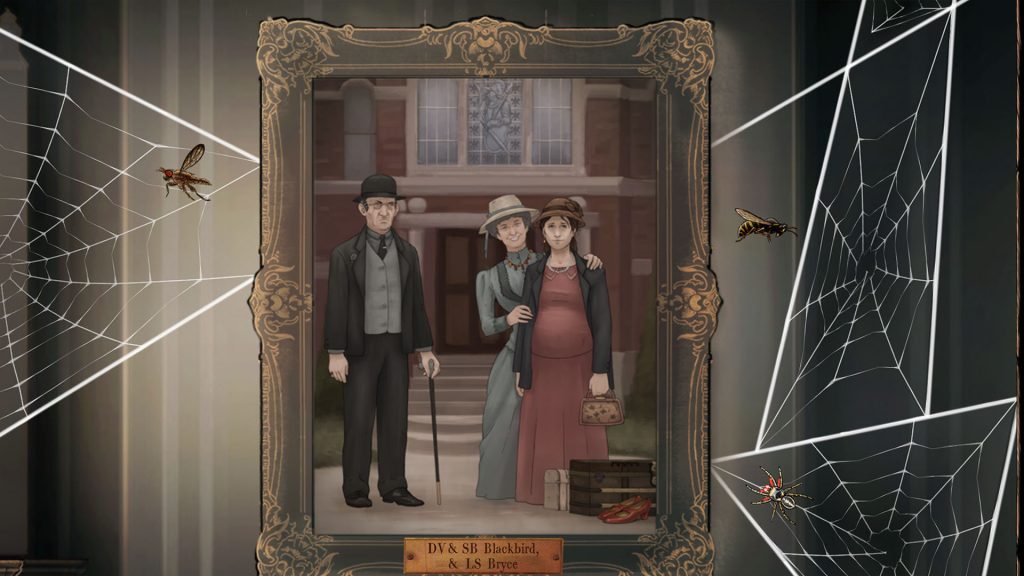 One of the most unique features is that the game knows where you are in real life and changes the time of day and weather in the game to match what you see outside your window. Mosquitoes only come out when it rains. Fireflies and crickets can only be found at night.

Lightning strikes the top of the tower during a thunderstorm, the gears of the windmill are most dangerous when the wind is blowing, and you can only see the moon on a clear night. Each of the 30 levels changes its gameplay significantly, which creates 120 levels’ worth of variety. The game even knows what the phase of the moon is, and you’ll need to keep track of that to solve the hardest puzzles and collect the rarest and beautiful insects.

You have access to a Time Machine and Weather Device, so you won’t be blocked, but we do hope that when you notice the first raindrops falling in real life, you think to reach for your PS4 or Vita, or on a night when you see the full moon, you’ll have figured out what special things to search for where! 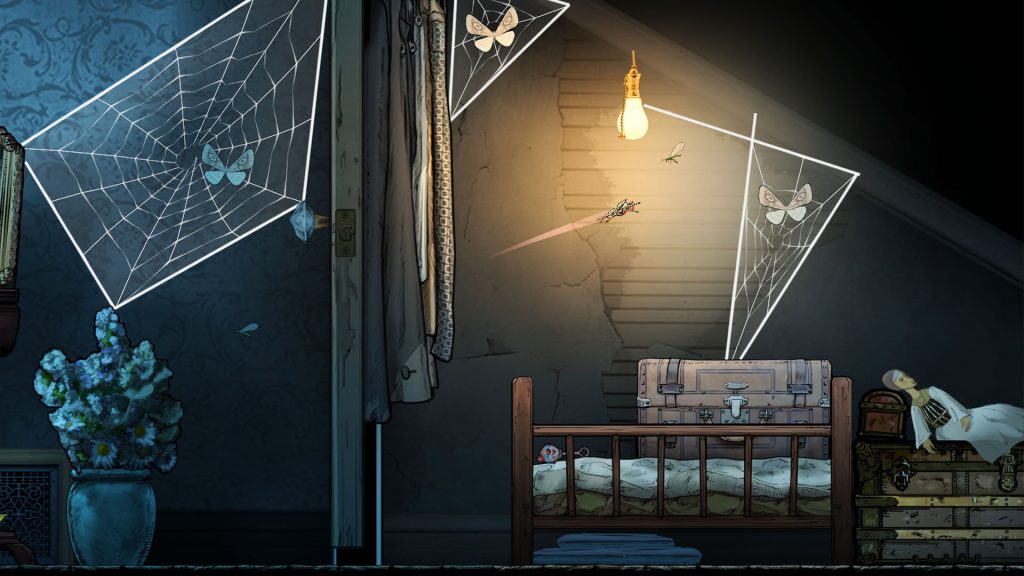 PS4B: Considering how many people feel about spiders in general, what made you decide to work on a game where a spider is the main character?

I remember just before we released the little version of this game back in 2009 I was feeling VERY nervous about a game where you played a spider. We were full of anxiety – “what have we done?” Games usually feature tough dudes, giant mechs, and ninjas. No one is going to want to be a spider! But that was just pre-release jitters. That version of the game turned out to be a huge hit far bigger than our expectations, winning awards and being downloaded over 2 million times! People obviously think it’s fun to be a spider, jumping around, building webs, tackling hornets out of mid-air, trapping insects, and doing spider things.

Of course, some people are arachnophobes. They have written to us many times over the years saying they love what the game is trying to do, but that they just can’t play a spider! So just for them, we did something special in Spider: Rite of the Shrouded Moon. What’s an obvious substitute for a spider? That’s right, in this game you can play as a walrus! A tiny, ceiling-crawling, web-slinging walrus. To do that, just go to “Settings” and “Save Sessions” and change your name to ROSMARUS. You’re welcome, arachnophobes! 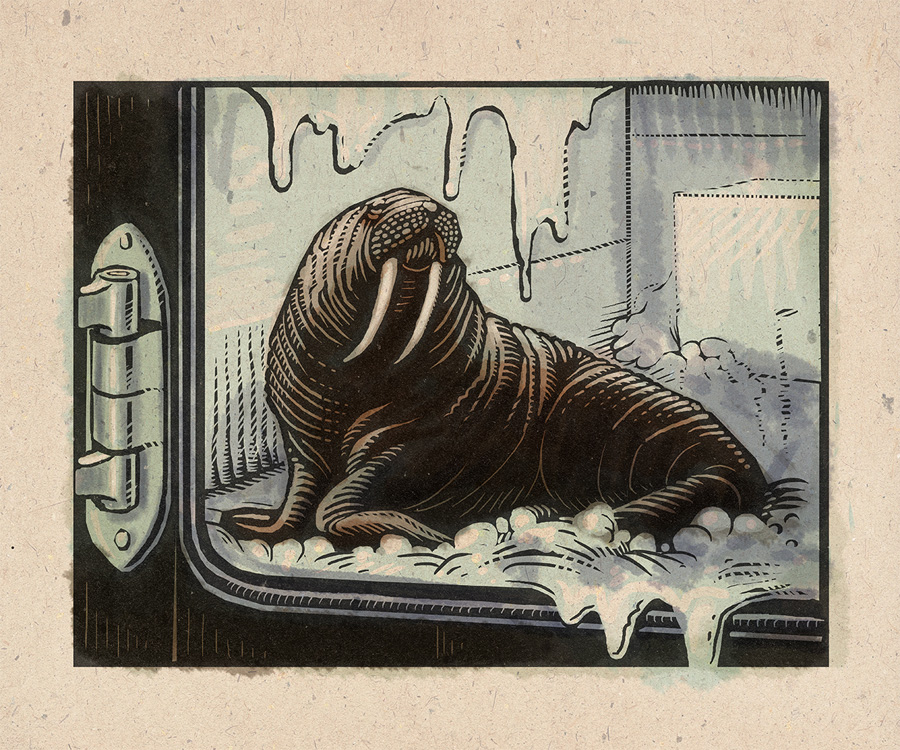 PS4B: Is there any new content for the PlayStation 4/Vita version of Spider: Rite of the Shrouded Moon?

To keep things fair, all of the versions are the same. However, they were all carefully developed to make the best use of the hardware. We started playing Spider on PlayStation controllers and Vita thumbsticks as soon as we started development, which meant we kept refining those controls the entire time the game was being worked on and tested. I personally love playing on a big screen best, so the PS4 is the platform for me! But lots of testers prefer playing on the go with their Vita. 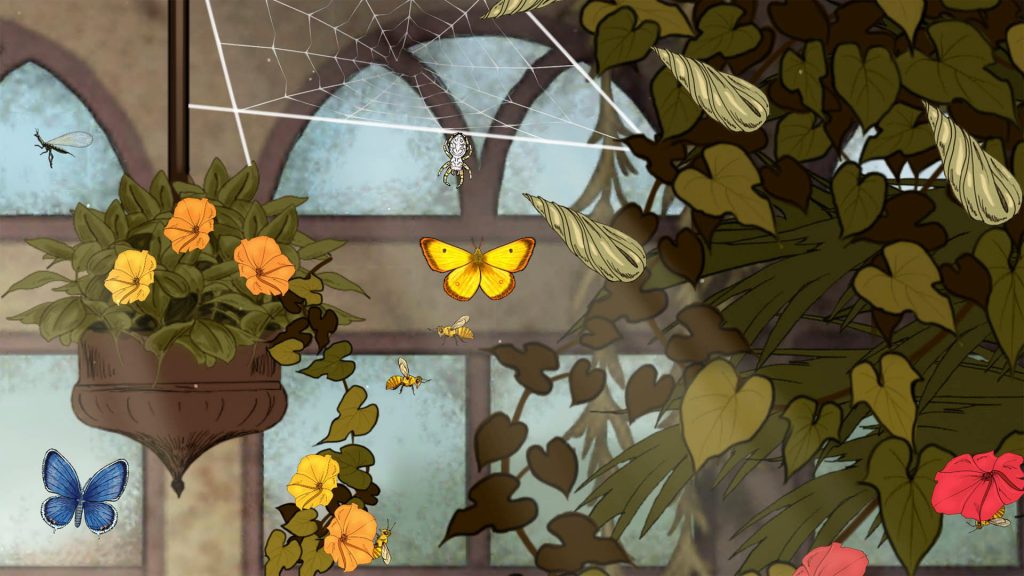 PS4B: It’s great to see that the game features a full trophy count with a Platinum trophy. There’s plenty of trophies to get considering that most of them are Bronze trophies with a few Gold thrown into the mix. Are any of the trophies missable? How many hours will someone need to play the game in order to get every trophy and unlock the Platinum?

There aren’t many trophies in Spider: Rite of the Shrouded Moon that you are guaranteed to get just by playing. Our gameplay is very flexible, so our approach to trophies is to encourage players to try new things. For example, if you smack into a cricket that’s jumping, you’ll toss him higher up into the air. We made this feature as one of the ways you can get crickets into your webs. But if you’re good, you can do it over and over, never letting him hit the ground. It’s pretty funny, and we made a trophy called “Juggler” that you acquire if you discover that.

We have trophies for finding the rarest insects and figuring out how to capture them. For trapping tons of marshflies and eating them all without touching the ground, which really emphasizes the game’s strategic qualities. For defeating angry hornets without taking any damage. For speed running through a level in 30 seconds. These all force you to play the game differently, aiming towards different goals, using the tools we’ve given you in new ways. Between the 30 levels with 4 versions apiece, the 7 Mysteries you can solve, and the almost 50 trophies, there’s got to be 20-30 hours of unique gameplay right there, and that’s if you’re moving FAST. 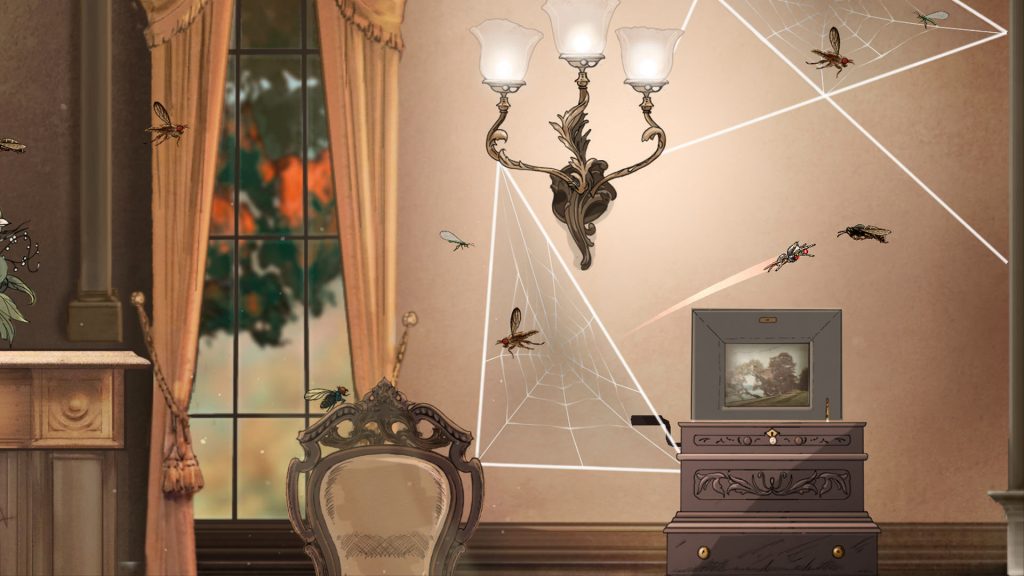 Is the Platinum trophy in Spider: Rite of the Shrouded Moon the hardest ever Platinum trophy to acquire? I’ll leave that up to your readers to decide! Here’s what you need to know: there is a secret society featured in the game’s story. They built Blackbird Estate for some hidden purpose. They left encrypted messages and secret passages all over that only their members were supposed to notice or understand. You’ll learn a lot more as you play the game.

The important thing is that this secret society was based on a real-life one, called the Knights of the Buried Chambers. We researched them carefully when making the game, and tried to depict their customs and rituals as authentically as possible. We even use their cipher alphabet, the one they invented centuries ago. The more you know about this group, the better you will be able to see hidden mysteries invisible to everyone else and understand what’s really going on in the game’s story at the deepest levels. So Google the Knights of the Buried Chambers and start doing your research today. You’ll find there’s a real life mystery that goes very deep, and you’ll need to become an expert to get that Platinum trophy. Good luck! 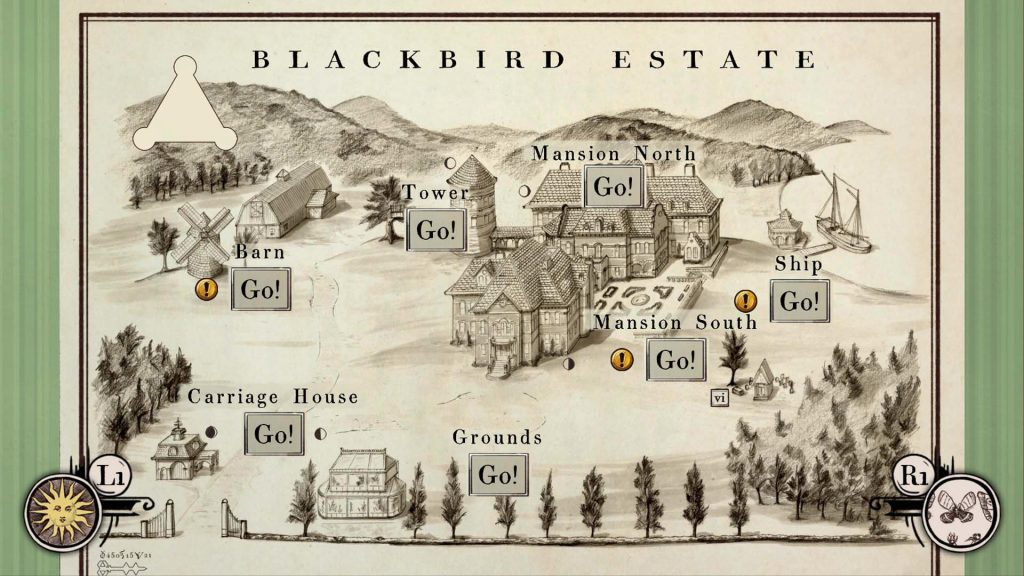 PS4B: With Spider: Rite of the Shrouded Moon finally available for PlayStation platforms, what’s next for the studio?

We’re really excited to see how the PlayStation crowd responds to Spider: Rite of the Shrouded Moon and see whether they are more excited about the scoring system and topping the leaderboards or making their way through the many secrets and mysteries of the story. We’re around to give hints and tips on Twitter @tigerstylegames.

Right now we haven’t started any new projects we can talk about. However, we have been dabbling quite a bit in VR! That’s a whole exciting frontier, don’t you think? We certainly haven’t seen the best of it yet, not by a long shot.

PS4B: And now it’s time to end this. Would you like to add anything more before we go?

Thanks so much! We honestly have been super excited to bring Spider to PS4 and Vita ever since we started this project, and it’s great to finally have it out into the world! 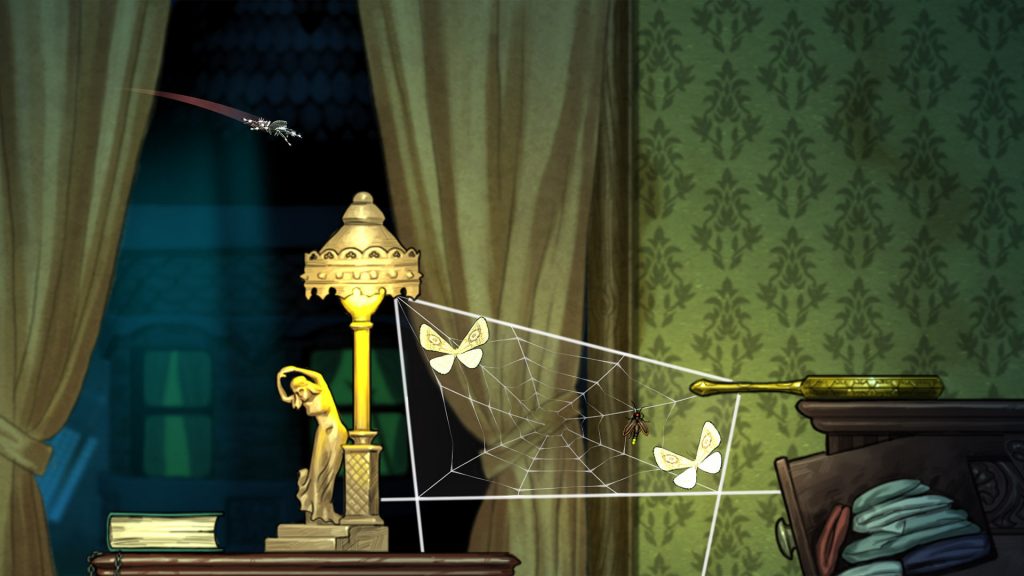 How to Achieve The Criminal Girls 2: Party Favors Platinum Trophy and Avoid Locking Yourself From It!