[PS4] Exist Archive: The Other Side of the Sky Review


To describe the game in short: Death is not the end but is the beginning… The opening cutscenes of Exist Archive: The Other Side of the Sky is a pretty grim start – it tells of an accident that took place in Tokyo, Japan. The main protagonists are involved in an explosion that caused their deaths, but that is only the start of their problems.

The main character in the game, Kanata Kujo, soon wakes up in the gorgeous and lush world of Protolexia. Kanata meets new characters and reunites with a few familiar faces as they try to find the paths back home. The unlucky band of victims soon discover that an evil God has placed a part of his soul in them, giving them immortality. 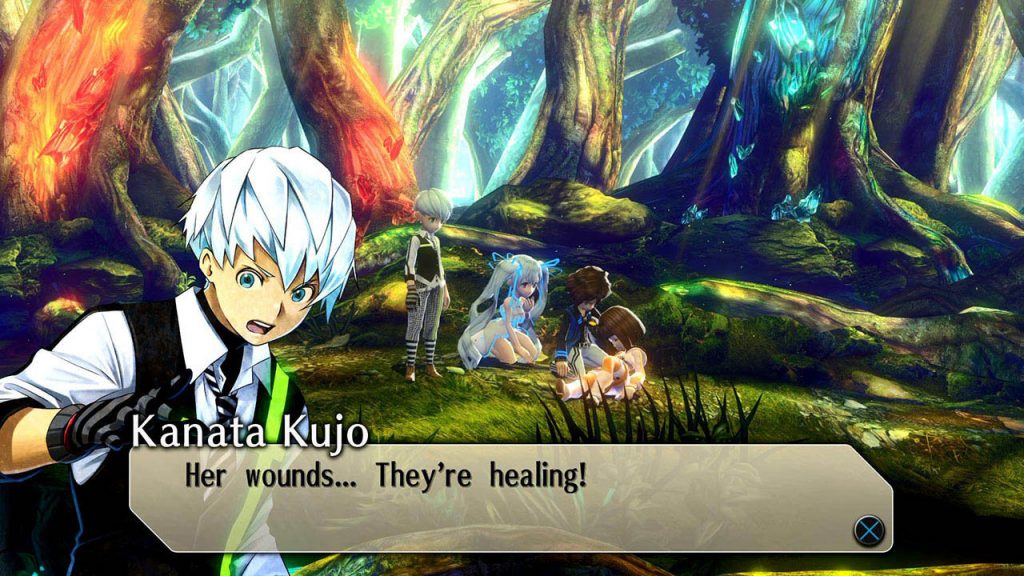 Exist Archive is a 2D sidescrolling JRPG with multiple endings – according to the game’s trophy list there are three routes to take, and each playthrough is roughly 40-50 hours long… and your actions affect the outcome of each run. Gameplay consists of more than 20 dungeons plus 15 speed run boss challenges and other hidden secrets. The game has a lot of content on offer that will probably take longer than 50 hours especially if you plan on getting the Platinum trophy. 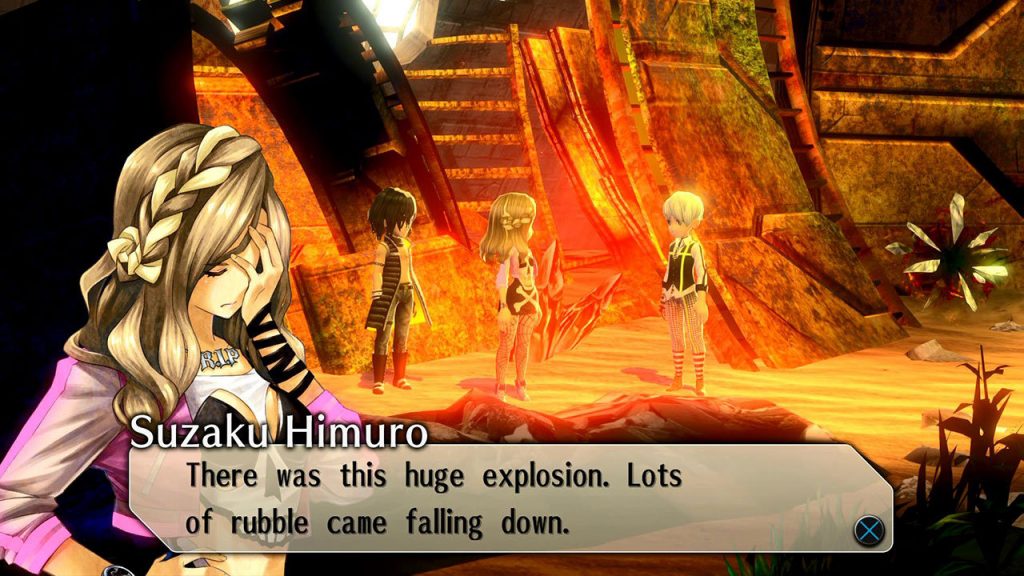 You control Kanata Kujo, and the aim is to explore specific dungeons, complete quests, find treasures known as ‘pods’ and defeat tough bosses. Each dungeon will require more than one run through to fully explore and collect everything inside. Once you have completed a quest in a dungeon, you can replay the dungeon in free mode. As you progress in the game, more sections of each dungeon will open up. After completing each one you are given a rank between A and D – D being the poorest and A being the highest rank. The higher your rank, the better prizes you obtain. 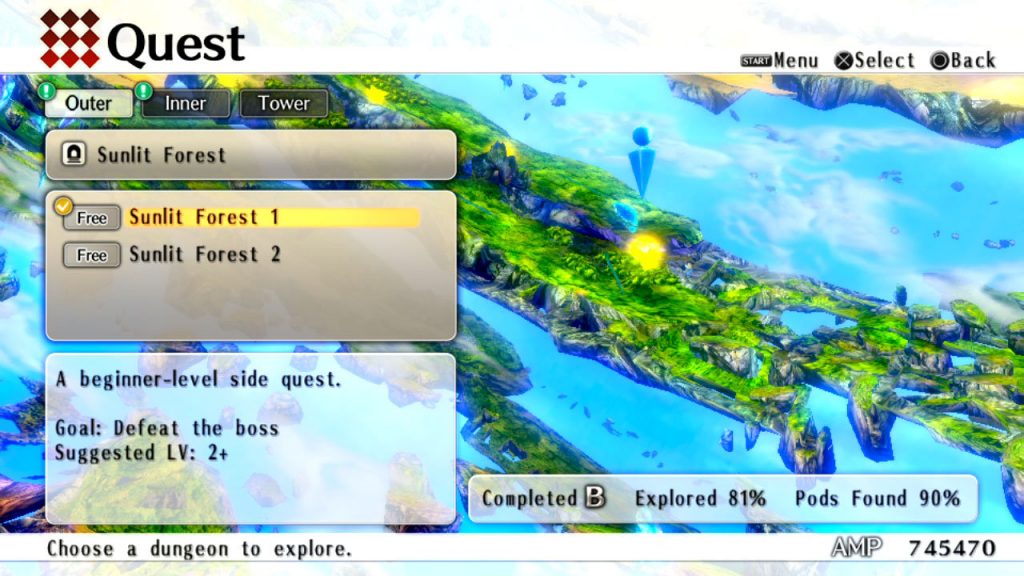 As with any standard JRPG, you will level up and unlock new skills and classes that will help with your adventure. For example, there are certain sections that require the double jump skill, and until you obtain that, the rest of the dungeon will remain inaccessible, so there is a little hint of Metroidvania in the game. 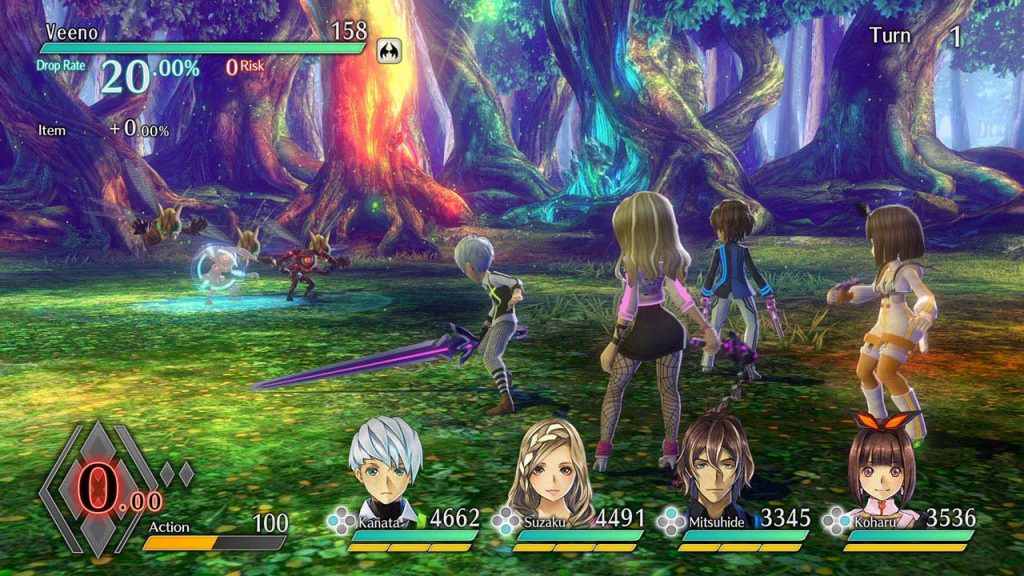 Not only that but you can acquire new attack skills to that will increase your team combos. Once you have a few new attack skills for all party members, you can experiment with your party set up and get the best team to achieve the highest combos. There is a trophy for reaching a combo streak of a 100 which is not difficult to do as you have a party of 12 to choose and experiment with. Each character has his/her own specialty weapons – Kanata is a sword aficionado and Mitsuhide is very adept at wielding dual guns. 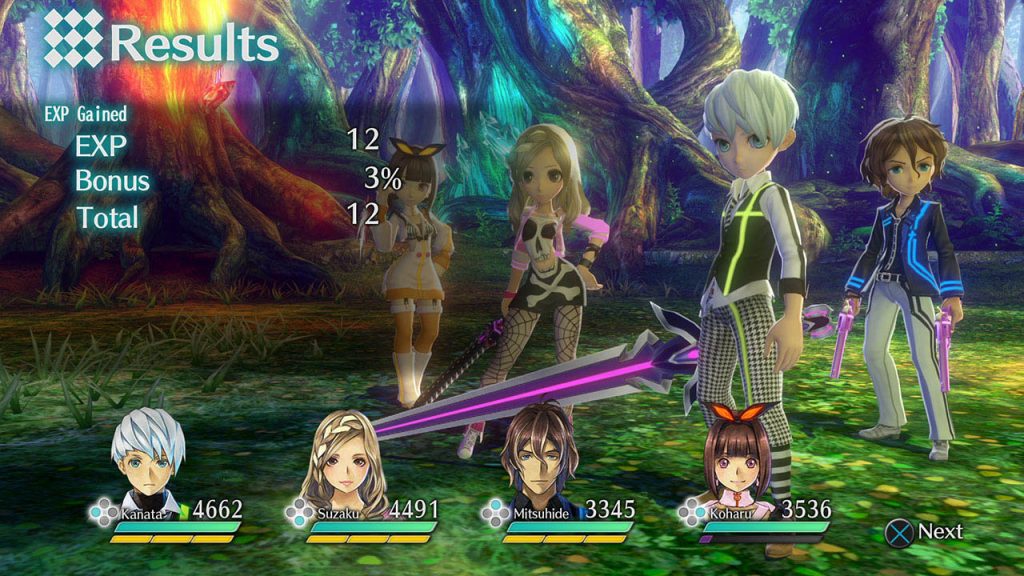 Each character has a backstory which is revealed little by little when certain quests are activated. Some character stories are more interesting than others, but I can say there is a wide range of emotions to experience as you listen to their stories unfold during the course of the game. You will feel a little closer to them as you progress, even caring for what happens to them. 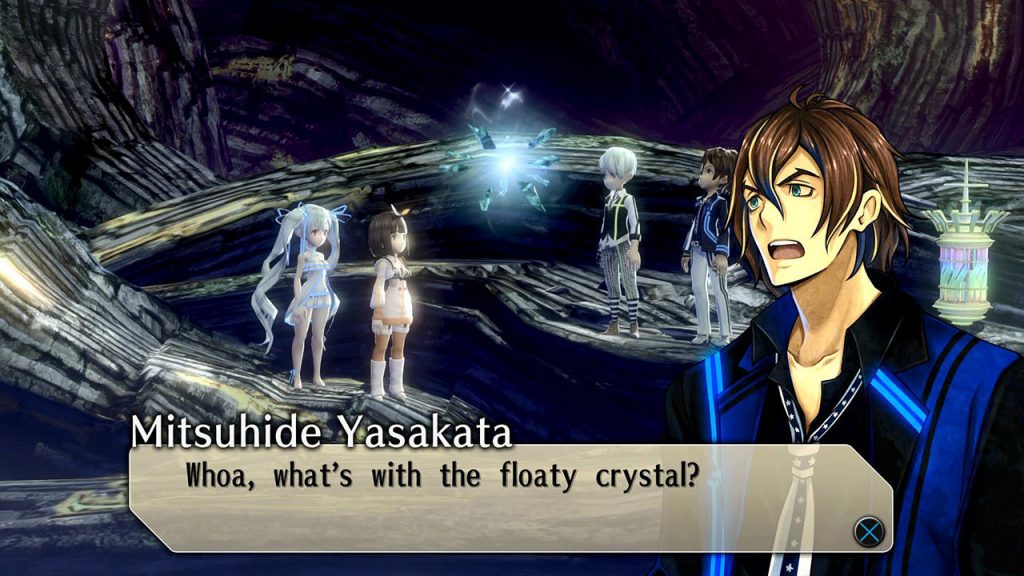 The combat system is really good and very easy to get used to. The control set up is very comfortable. Once you have progressed enough to have more than one member in your party, the fun can really begin. Each character is set to a face button on your DualShock 4, so if you want to attack with Kanata you press the Square button, and do the same with the other characters for the button each one has been set to. The actions you can perform depends on how many action points you have. Combat is turn-based and is split into two phases. The attack phase lets you attack your enemies until your AP is depleted, and then when it is the enemy’s turn to attack the Guard phase is initiated which allows you to defend while the enemy makes their move. 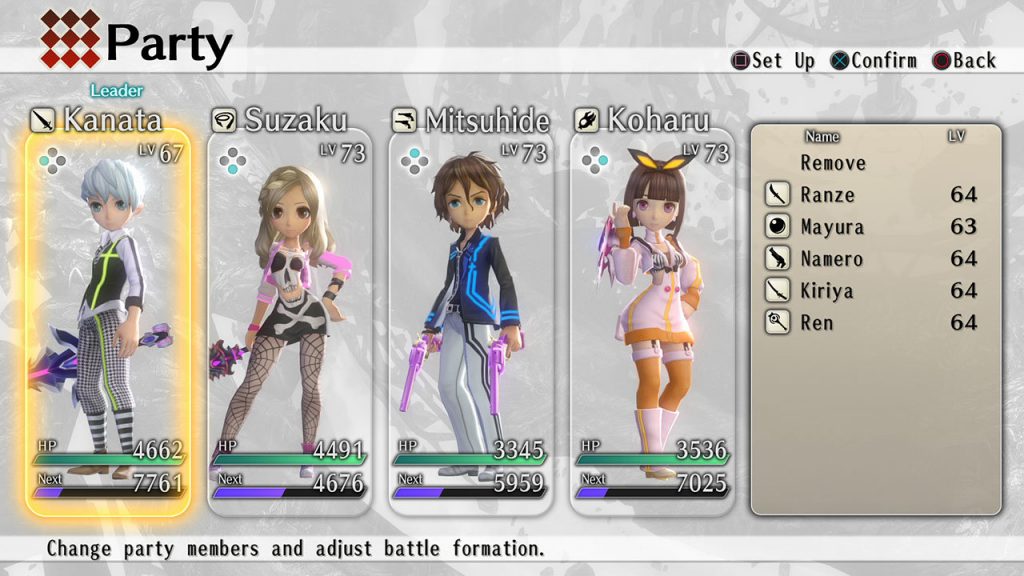 That is not all Exist Archive: The Other Side of the Sky has to offer. You will also have about 15 speed run boss fights to beat, and they will become available as you progress in the game. The first one will unlock after you acquire the first two party members. The aim of the speed run mode is to beat a certain boss within a given time limit – it doesn’t matter if you fail since you can improve by leveling up. There are three speed run trophies to earn – while they are not overly difficult, they will be time-consuming. 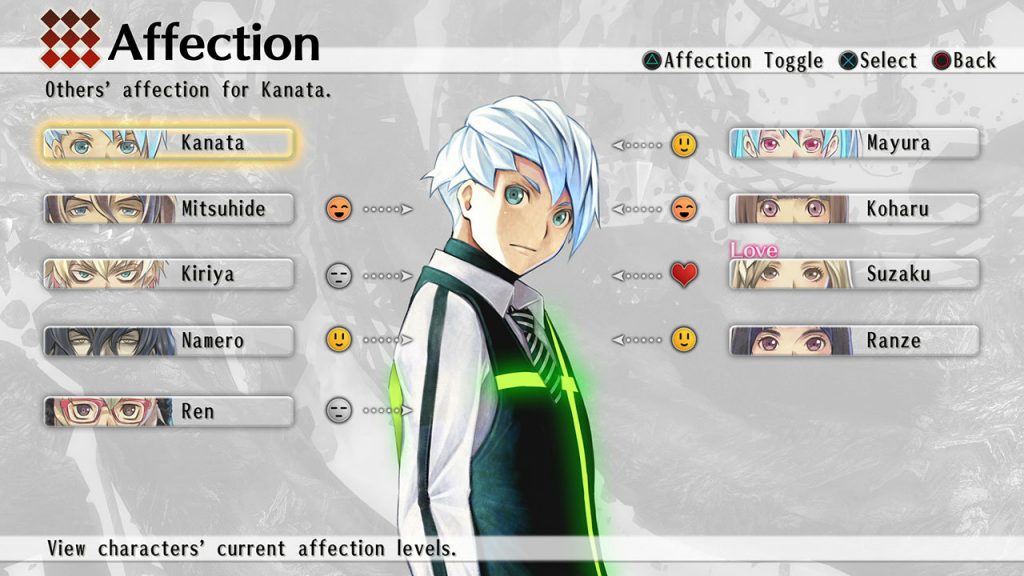 The graphics of Exist Archive are great and showcase a game in full 3D with gorgeous and vibrant colors – I was awestruck by the sheer beauty of the game. The game is also highly addictive – I was hooked within minutes of starting! Tthe story is fantastic, and there are more than 20 dungeons to complete as well as some hidden locations to find and three possible endings. 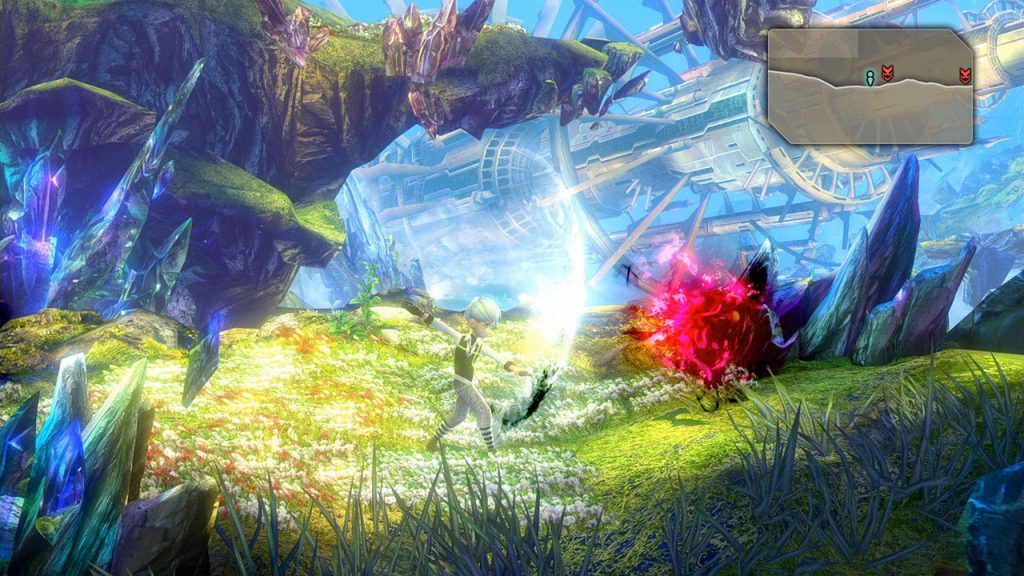 Exist Archive: The Other Side of the Sky is an incredible game with a deep rich story and a highly addictive combat system. The game is also available on the PS Vita with cross save, but not cross buy. The game is available as a physical and digital release in the US and Canada, but is a digital-only option for certain EU countries. I loved my time with the game for my Exist Archive: The Other Side of the Sky review, since it is one of the best PS4 games out there. If you’re a JRPG fan you have to get this one today! 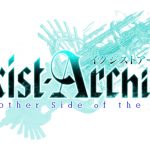 Exist Archive: The Other Side of the Sky Review

Game title : Exist Archive: The Other Side of the Sky

Disclaimer
This Exist Archive: The Other Side of the Sky review is based on a PS4 copy provided by Aksys Games.