We’re currently working on a review for Dead Synchronicity: Tomorrow Comes Today, a very fun adventure game you should try today, so we got in touch with Fictiorama Studios to talk about the game’s long journey to Sony’s PlayStation 4.

PS4Blog: Hi! Thank you for joining us. Could you please introduce yourself to our readers and tell them a bit about yourself and your work at Fictiorama Estudios?

Hi! Thank you for your interest in Dead Synchronicity. I’m Luis Olivan, producer at Fictiorama Studios, who is also in charge of all communications.

PS4B: Dead Synchronicity: Tomorrow Comes Today is now available in the United States and Europe for the PlayStation 4. How would you describe the game to someone who has never heard of it?

Dead Synchronicity: Tomorrow Comes Today is an adventure game in a post-apocalyptic setting that tells the story of Michael, a man without a past who must recover his identity and find out what happened to make the world turn into this.

On one hand there is the “Big Wave,” an inexplicable concatenation of natural catastrophes that has depleted all energy sources and eradicated all communications, sending the world into chaos – this is why the ruthless authorities and the military took over everything. And on the other hand, there is a pandemic of the “dissolved”: diseased whose delirium grants them supernatural cognitive abilities… while sending them to a gruesome death.

The three pillars of the game are its narrative, influenced by Cormac McCarthy (The Road), and Joseph Conrad, ton ame a few, its arte, with strong expressionist influences, and its music which is from a rock band called Kovalski, steeped deep into the soundtracks of Italian giallo and progressive rock from the 1970s. 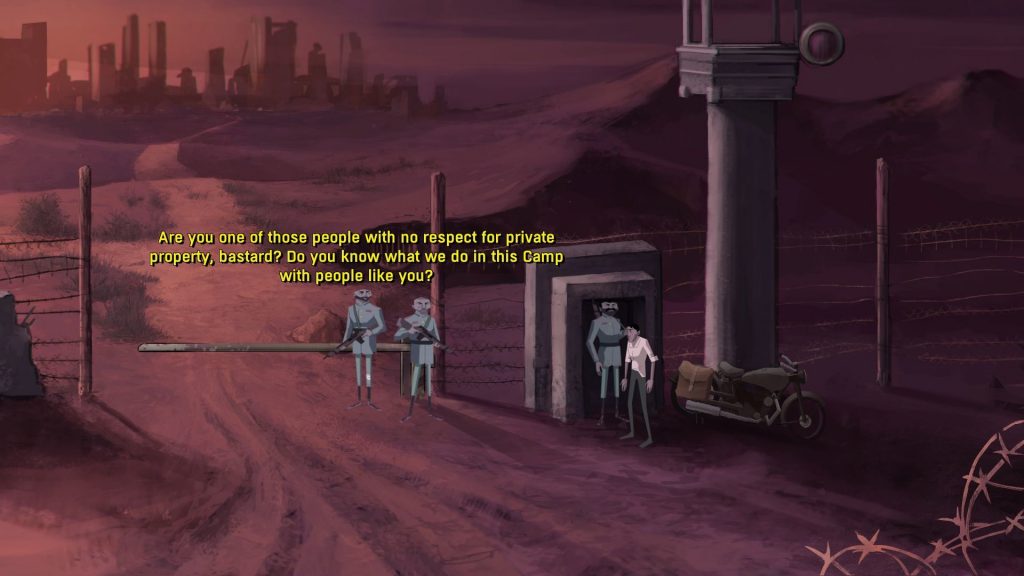 PS4B: It’s been now over two years since the Kickstarter campaign ended and the team was able to work on the game in full. What have you learned during the two years of development? What has changed in the way that Fictiorama Studios sets out to create new games?

Yeah, over two years since the campaign ended and little over a year since the PC version was released. Dead Synchronicity: Tomorrow Comes Today i sour first game, so when we got down to it, on top of trying to learn from everyone’s efforts and skills, we had to guide ourselves every now and then on a bit of intuition.

After almost three years of putting our everything into Dead Synchronicity, we realize there are many things on which our intuition was spot-on, but there are others things were we can improve the process, such as in coordinating the entire team, documentation management, etc.

But, in essence, we continue doing the same, which is what motivated the three of us to bet on Fictiorama: developing games that we ourselves would like to play. 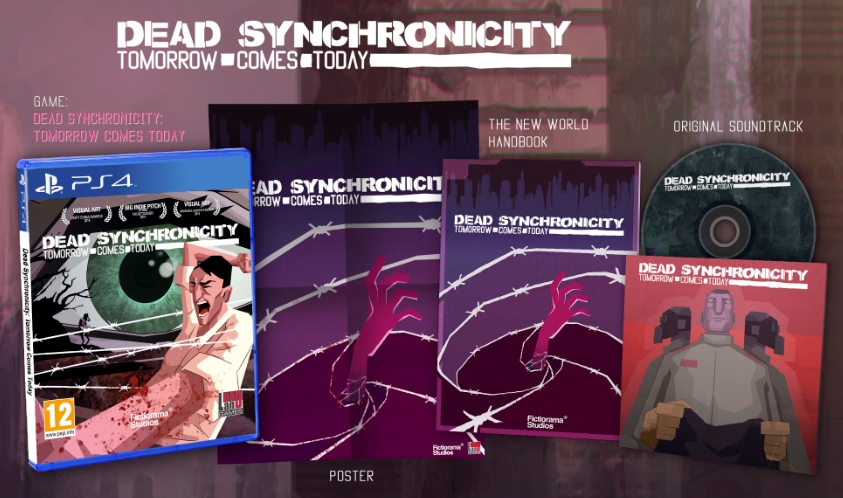 PS4B: Who did Badland Games end up deciding to publish Dead Synchronicity: Tomorrow Comes Today for PlayStation 4 while also launching a physical copy in Europe? Is there any chance of a physical copy also being distributed in the Americas?

We’ve known Badland Games for a long time now, and we’ve always stayed in touch with them. They have a lot of experience in distributing console games, so when they proposed publishing a version of Dead Synchronicity for PS4 we thought it woudl be a great way of targeting a segment of players that so far haven’t had a chance to experience the game on PC or mobile. Because of all this, both Badland and us have put a lot of effort into adapting the gameplay mechanics to the PS4 as well as the interface, so that it all clicks better with console gamers.

As for releasing the physical version in the Americas, that is up to Badland Games to decide. 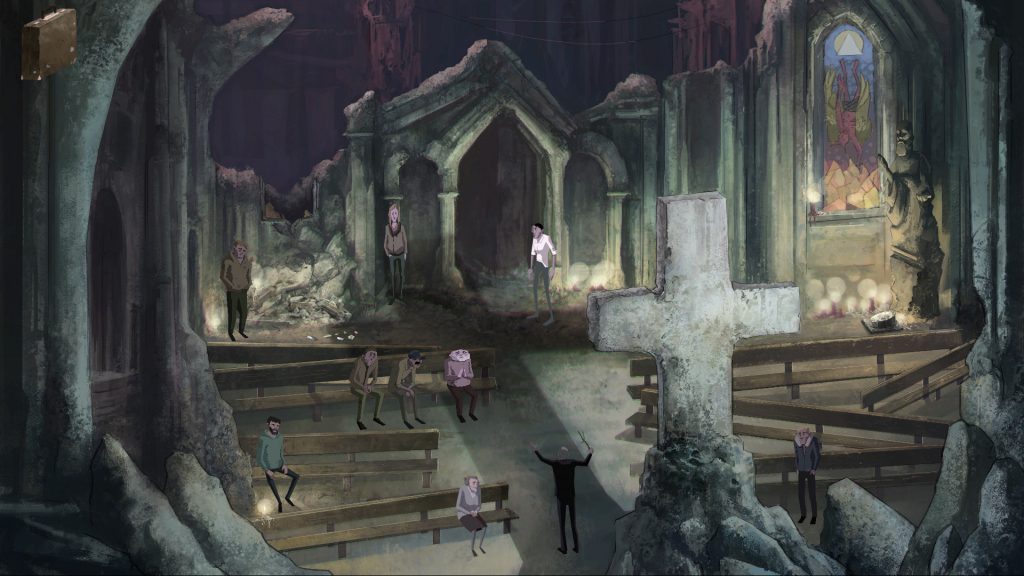 PS4B: It’s great to see a game with a full trophy list that includes a Platinum trophy at the end of the road. How many hours will it take someone to obtain all trophies? Is it necessary to complete the game several times to get all the trophies?

Well, the total number of hours will depend on a player’s skills. The game has trophies you get for your progress in the game, but there are also some awarded for specific interactions. We thought it was a way to reward players who took it upon themselves to do things differently and experiencing parts that, while not necessary for moving the story along, do end up being interesting and maybe a bit bizarre.

You don’t have to complete the game many times in order to get all the trophies, but they’re certainly not easy to get in one go during your first time with the game… 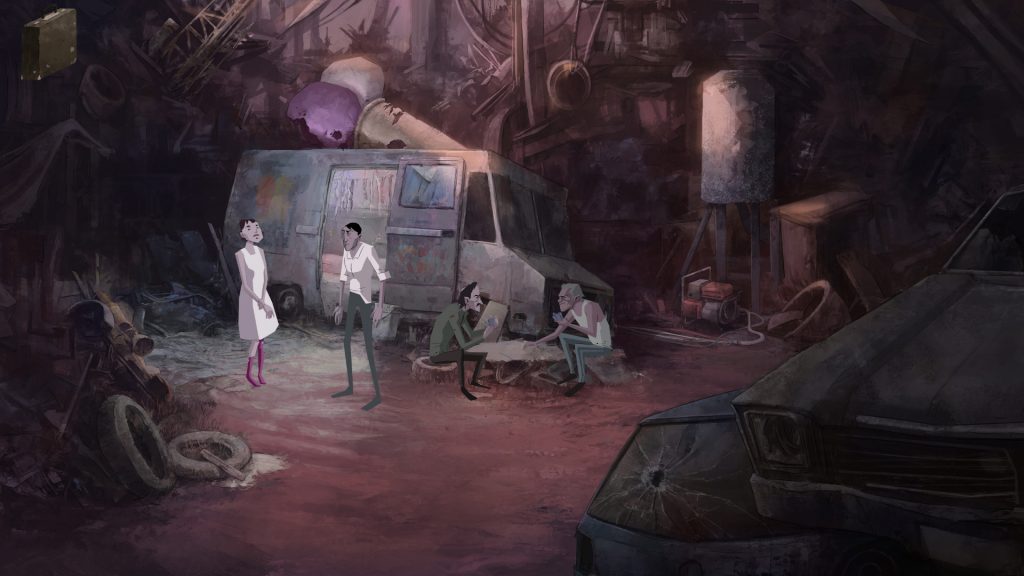 PS4B: Now that the game is available on PlayStation 4, what is next for Fictiorama Studios?

Well, we haven’t ruled out taking Dead Synchronicity: Tomorrow Comes Today to other platforms… but we’ve also been working on another project you’ll be hearing more about soon!

I want to once again thank you for your interest in the game, and to also encourage all PS4 players to try Dead Synchronicity!

[PS4] Nightmares from the Deep: The Cursed Heart Review