Over the last couple of years, PS4Blog.net’s community has grown steadily, and to support our growth, we definitively needed more writers to help us. EdEN and I thought about someone who could be the best fit for this new position, and the choice was obvious! So without further ado, let’s welcome a new full-time writer into the PS4Blog.net staff… so heeeere’s Tracey!

She’s been very busy here at PS4blog.net, reviewing games left and right like there was no tomorrow! She loved Overcooked a cool cooking couch-coop game. Tracey took a crack at DOGOS, a great shoot ’em up you should all try right now. And she also reviewed Lifeless Planet, a very interesting game on Sony’s console that is worth a try. And that’s only a few recent examples!

Tracey has been great so far, and we look forward to seeing what she’s got planned now that she’s the newest official staff member at PS4Blog.net! 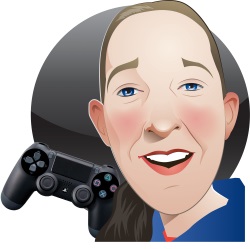 Hello, lovely readers! I’m Tracey, and I am from Cumbria in the UK.

Thanks to my older brother, I got into gaming with the ZX Spectrum (yes, I really am that old!). My very first game was Attic Attack, a classic close to my heart! I then moved on to Commodore 64, and since SEGA was born not long after that, my older brother became a SEGA fanboy owning all consoles except the Dreamcast.

Unfortunately, his SEGA consoles were off limits to me, but that didn’t stop me from stealing precious moments behind his back playing classics such as OutRun, Sonic The Hedgehog, Kid Chameleon and Alex Kidd!

I love RPGs, JRPGs, Point and Click, and Puzzle games. As for sports games, I do like tennis, baseball, and pool (yes, pool is a sport!).

I started writing for the PS3/PS4 blogs back in March 2015, and I have been having a blast ever since!