Spoiler alert: It’s way better than we imagined and we had a blast playing it!


An international hit anime ‘Attack on Titan’ has come to the PlayStation®!
Battle is joined between the man-eating Titans and Eren and his companions. Experience the illusion of being in the anime, and controlling the flow of the story. The story from the anime, with a few original twists, is yours to experience!


This is a double review for the PS4 and Vita versions of Attack on Titan. The game was played on PS4 by EdEN and on Vita by Ceidz. This review presents what they both had to say.

Okay, I’ll state it right now: I loved the Attack on Titan anime, so I had huge expectations for the game. Often a TV show concept is poorly translated to a console version, but this time that is not the case: this game is actually very enjoyable! Be warned however that in this game knowledge of the source material is mandatory otherwise you’ll be wondering what the hell is going on. Oh, and it’s also violent, so this is targeted to mature audiences only!

The game begins with a very impressive cut-scene showing Eren and his friends fighting a huge Titan: the one from the anime who can see over the city walls! I could even say that it’s a very cinematic game as there are story cut-scenes after each battle sequence. The cut-scenes also use a different rendering engine than the main game which makes it look even closer to the actual anime.

As for the battle gameplay in which we spend most of our time in the game, we navigate through the vast cities by using our gas-powered thrusters, and boy is it satisfying! Speeding through the city is a blast, and the controls are very easy to get the hang of! Of course, we’re not there on for a scenic trip, since there are Titans to take down. They are tall, so we usually can’t immediately aim for their weak spot in the back of their neck, so we can either stick to an upper wall and come from above to aim there, or we can go the other way by destroying their legs to make them fall down. The Titans limbs eventually grow back, but we usually have more than enough time to kill them before this happens.

The graphical engine is great, but I did notice it hit the PlayStation Vita hard when there were 3-4 Titans on screen (which happens often). I endured this more than once, and the dip in frame rate made the game harder than it should. Hopefully a patch is on its way for the PlayStation Vita version because other than that it’s a very good portable take on such a huge game! As for the game’s soundtrack, the themes are generally great and greatly complement the action on screen, making it feel as epic as the anime. 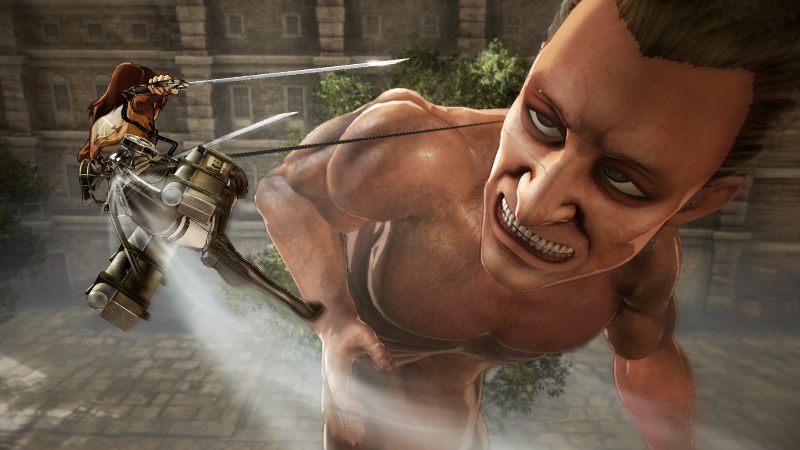 I took on the PlayStation 4 version of Attack on Titan for this review, and I did indeed have a lot of fun! I’m a fan of the Musou-style of games that Omega Force is so good at making, and the last couple they’ve made have taken the source material and put it to good use, giving us some very fun games! Taking into consideration what this one is based on, it was to be expected that things were going to be a bit on the gory side, but if you’re not into that you can lower the gore level even before you get to the title screen since the game gives you a prompt for that, as well as one asking if you want to play on Easy.

When you start to play, you can select Attack Mode to play through the game’s story, or you can go to Expedition Mode. The story mode is big, and you’ll be spending roughly 15+ hours in it. Things kick-off with a bit of a retell of when Titans appeared and how the survivors built three large and tall walls to protect their lives. Unfortunately, the walls could not keep the Titans away forever, so when the first wall fell, it was time to take action and retaliate. It is your mission to do all you can to kill the Titans before they kill everyone.

The game begins as Eren and the group are leaning how to use their fighting gear. You’re trust into a prologue chapter that serves as a tutorial for players to understand how to jump, fire an anchor and start moving very fast in the air. Another anchor can then be fired to keep your character’s momentum going. Pressing the X button can fire gas from your equipment, letting you move even faster. There are some spots where you can’t use anchors, so be sure to be on the lookout for the No Anchors mark above a character’s head. If during your movement you end up running into a wall, be sure to hold the Square button so that you can run on the wall.

To enter combat, you’ll have to press the R1 button when a Titan is near. This will allow you to fire an anchor into a body part of the Titan. You can still use the X button to boost during combat, and this will save your life more than once. You’ll start to attack a Titan’s body parts by pressing the Triangle button to do some damage. You can switch between body parts by pressing the Square button once more, but be careful because if you switch too much the anchors might stop working and you’ll be in for a world of hurt.

During your missions you will find Logisticians in the map. Approaching them and pressing the circle button will allow you to replenish your items, which can be activated by pressing up on the D-pad. You can switch between items by pressing left and right no the D-pad, so be sure to always have the right one ready! As you move around and fight, your gas will run out, which is very dangerous as you won’t be able to perform some actions. On top of that, your blades will be consumed as you use them. Items help you to repair them, so always keep one handy!

The better you do in a level, the better your rank in the end. And the better your rank, the more experience you’ll get for your effort! Once you have earned enough experience points your Regiment Skill and your Soldier Skill for a character will level up. A higher Regiment Skill will let you have access to new equipment at Camp, as well as new equipment for you to develop. As for Soldier Skill, it will let characters learn new Skills that can give you a boost during battle. You’ll also get to earn Regiment Funds after a successful battle. Regiment Funds are used for developing new equipment, so be sure to defeat as many Titans as you can!

You can also obtain materials after a battle – you can get more if you destroy many body parts. As you can imagine, materials are a crucial part of equipment development, so the more materials you have, the better your odds of gaining access to more powerful equipment.

Expedition Mode can be played online or offline, and I’d suggest you play offline for a bit before diving into the network, so you can get a feel for things. You start at the Camp where you can talk to characters to trigger events. You can take on survey Missions and Expeditions, collecting materials to develop more powerful equipment, which is very important considering what you’re up against. The good thing is that the equipment, materials and regiment funds will be shared between Attack Mode and Expedition Mode, so working hard in one mode will reward you in the other.

The game looks great on PlayStation 4, with cell-shaded graphics that make it look very close to the anime. Action is fast-paced, and the game’s framerate never seemed to take a hit, even with several Titan on the screen as I kept swinging all over the place. 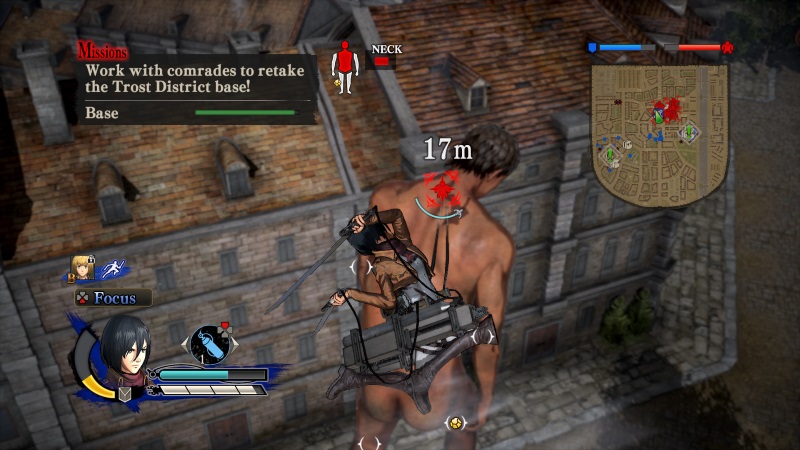 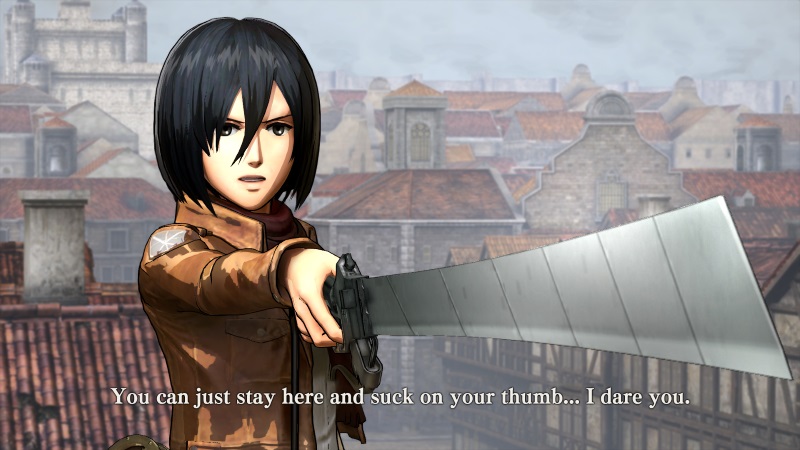 Attack on Titan is an excellent take on the beloved anime. It is fast-paced, looks great and offers a ton of online and offline content for you to enjoy. While the game does struggle a bit on PlayStation Vita as it forces it to its limits, the PlayStation 4 runs smoothly without a hitch. We both had a great time playing the game for our Attack on Titan review, and we hope to read what you thought of the game once you get a chance to play it!

You can purchase Attack on Titan from the PSN. 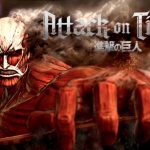 Disclaimer
This review is based on PS4 and Vita copies of Attack on Titan provided by Koei Tecmo America.

Who Wants To Play Overwatch On PlayStation 4 For Free?