Hit the skies in a full out dog fighting challenge in the most high octane way. Put your thrusters to full blast and prepare for some dizzying combat. It’s time to flip into our Strike Vector EX review!

Strike Vector EX is designed with new console-based controls and upgraded with new features and modes for PlayStation®4. To complement the already robust competitive multiplayer game, Ragequit brings a story-based single-player campaign complete with characters, cutscenes and deadly AI, new training modes, and a huge variety of battle styles ranging from elimination and survival to duels, boss fights, and demolition.

Strike Vector EX is a new air combat game with some cool ships and fast action. The game kind of gave me a Star Fox vibe with more freedom going on. The game has a strong single player game, but will have longevity due to its multiplayer. It’s been on PC for a while now with a bigger multiplayer focus, but for the new console version a whole new single player campaign was added.

As mentioned earlier the game is an air combat dog fighting game with you flying around areas targeting other ships. Star Fox up until this point was the majority of my experience when coming into aerial adventures. This felt very different but in a great way. You have a large area to explore with your ship, and how you fly your ship is completely up to you. Want to go super fast evading shots and work on taking other fighter pilots out? Sure. You can slow down and zoom in and take your time aiming at your opposing pilot and get them from a distance by being extra careful, or you can do a combination of both and really confuse your opponents! 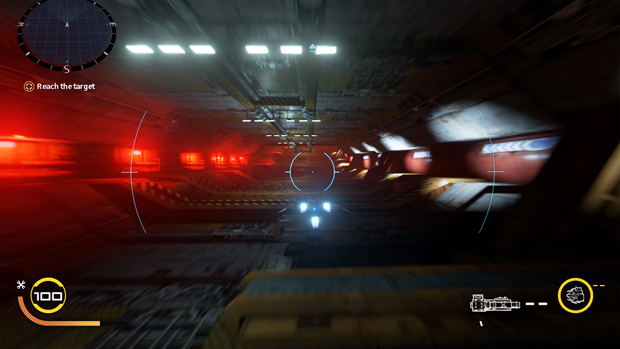 You should start the game in the campaign mode to learn the basics. The campaign is a great tutorial on how everything works, and it helps to get some practice before jumping into the frantic multiplayer mode. That being said, there is a limited payoff for playing through the story more than once, as the characters are very one-note with not the best voice acting. It felt very forced, and you could tell it was an addition to an already stellar package.

The multiplayer is where you are going to spend the majority of your time. The game has several arenas – for lack of better words – where you can engage in combat. They can range from old cities to around big spaceships, to older mining facilities. It’s a big range of options adding significant variety for the game. You want to learn these areas very well since colliding with the scenery can lead to damage up to and including death.

You can customize your ships to give every player a different feel in the game, and this allows you to play slightly differently as well. You can switch your main weapons between Gatling guns, rockets, missiles and more. You can also choose a secondary weapon and items, including extra shielding, more health or Tesla coils! Finally, you can add some passive bonuses to the mix including more armor, making your plane stealthier, or even boosting your ability to track other vectors with your radar. 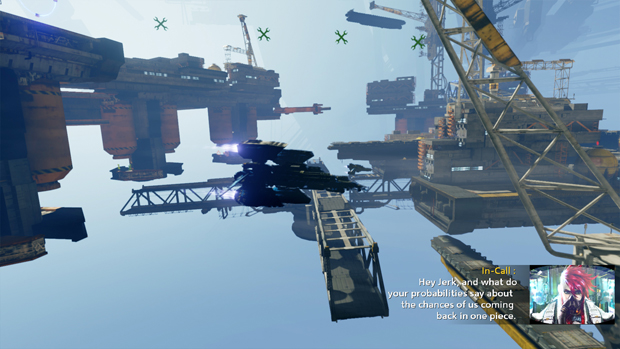 What I really liked about this compared to most multiplayer games, cough… COD… cough… is that all of these customization options are unlocked at the beginning, making sure everyone is on the same level. This means that skills are even more important right from the start instead of placing a huge focus on your loadout. You can also purchase cosmetic items with in-game currency for an extra defree of customization if you feel like it.

The game has most of the modes you would be looking for in a multiplayer game including team and regular deathmatches. One of my favorite modes was Destruction which has you taking on your opponents flying base as you try to take it down while avoiding enemy fighters. It’s really cool and actually gave me some Star Wars vibes while playing.

My one issue with the multiplayer was the general lack of people playing online at a time. Sure, the game can help fill empty spots with bots, but nothing matches human AI and the challenge it presents to players! It will be interesting to see how the game holds up in the future once it grows a larger install base. 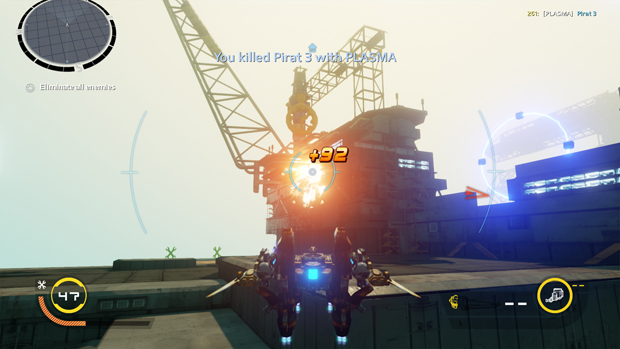 The game has 41 trophies, including 4 Gold, 6 Silver, and the mighty Platinum trophy. As with most multiplayer games, it relies upon a ton of multiplayer related trophies. Good luck with your trophy run!

Strike Vector EX is a strong game. You will spend most of your time in the multiplayer mode, as the single player campaign doesn’t do much besides teaching you the basics. Hopefully, the game can soon build a strong multiplayer community and stay strong. I enjoyed my time with the game for my Strike Vector EX review and I certainly recommend that you give it a go.

Disclaimer
This review is based on a PS4 copy of Strike Vector EX provided by Ragequit Corporation.

——————————————————————————————————————-
Don’t forget to follow me on Twitter @the_nmac for more reviews and live streaming from the PS4. Also follow @PS4blog_net and @PS3blogdotnet for updates on PlayStation info and reviews you need.
RageQuit CorporationStrike Vector EX
0 comment
0
FacebookTwitterEmail