Winter is coming! Wait, wrong Franchise? Ummm… Dwarves’r’us? Oh, this is before the dwarfs… Need a cool tag line. It’s hunting time! No, wait… Once upon a hunting time! Nailed it! Come check out our The Huntsman: Winter’s Curse review!

Winter is fast approaching as Queen Freya’s army marches relentlessly. Beneath the shadow of that deadly war, Elisabeth’s life on her family’s farm in Vardhelm comes to an abrupt end. Join her to find her missing brothers as you explore the Huntsman universe and encounter both familiar faces and new dangers, all while discovering the secret Elisabeth herself carries in this Adventure RPG.

Meet Elisabeth: Determined and optimistic, Elisabeth believes in fairy tales and happy endings–and a will to make them come true.

Meet Marcus: A staunch ally with unusual magic, Marcus’ path seems entwined with Elisabeth’s–yet he hides secrets that might endanger them both.

A Distinct Visual Style: Explore the world of Snow White and the Huntsman brought to life with character designs by Abigail Larson.

Engage in Strategic Combat: Engage with wisps, goblins, trolls and more via a strategic and visually appealing system. 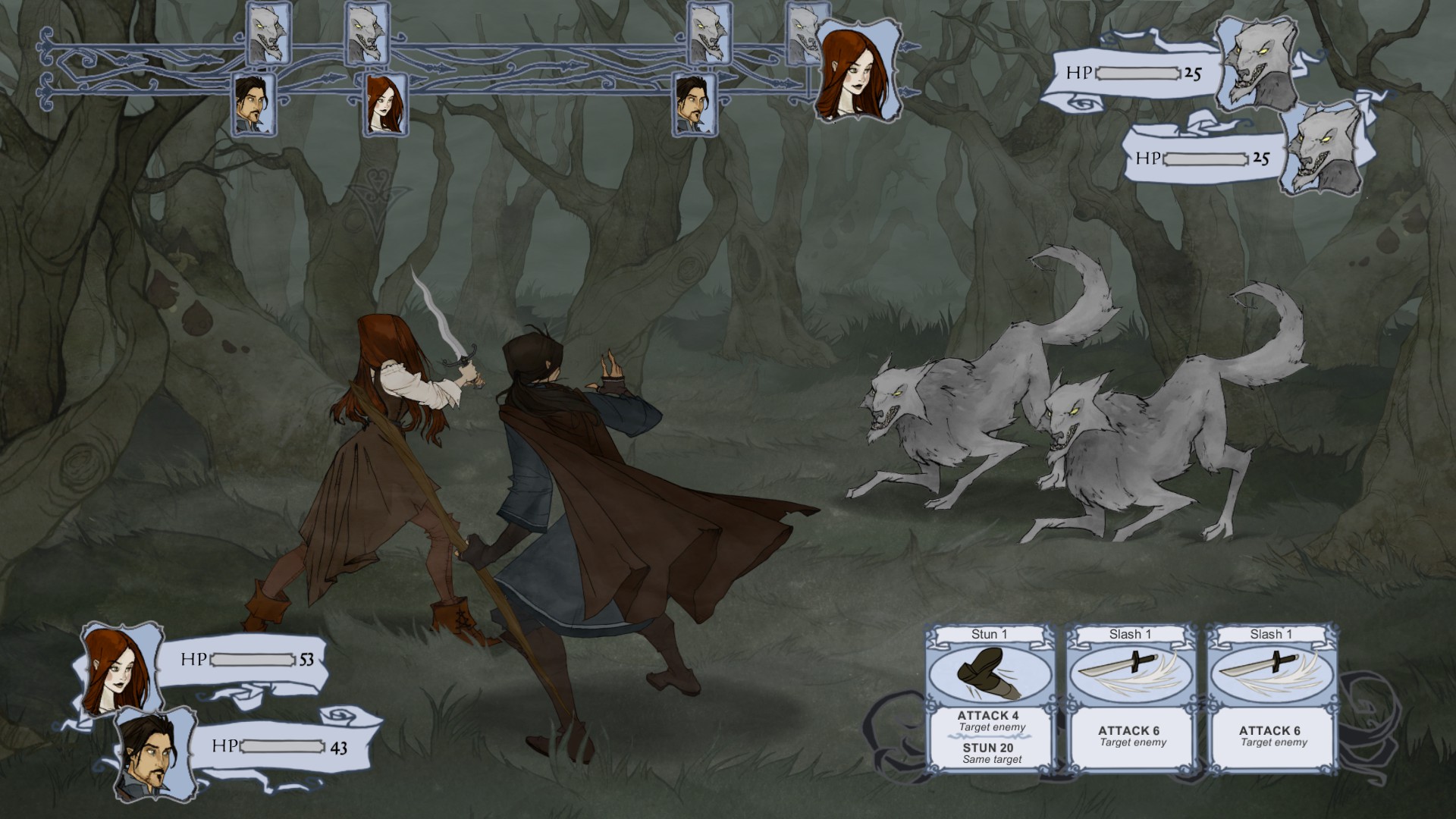 The game is a what I would refer to as an RPG-lite. The game stars Elisabeth as she embarks on a quest to find her four missing brothers. It’s a simple concept that with most RPG leads to bigger things and more at stake near the end of the game. 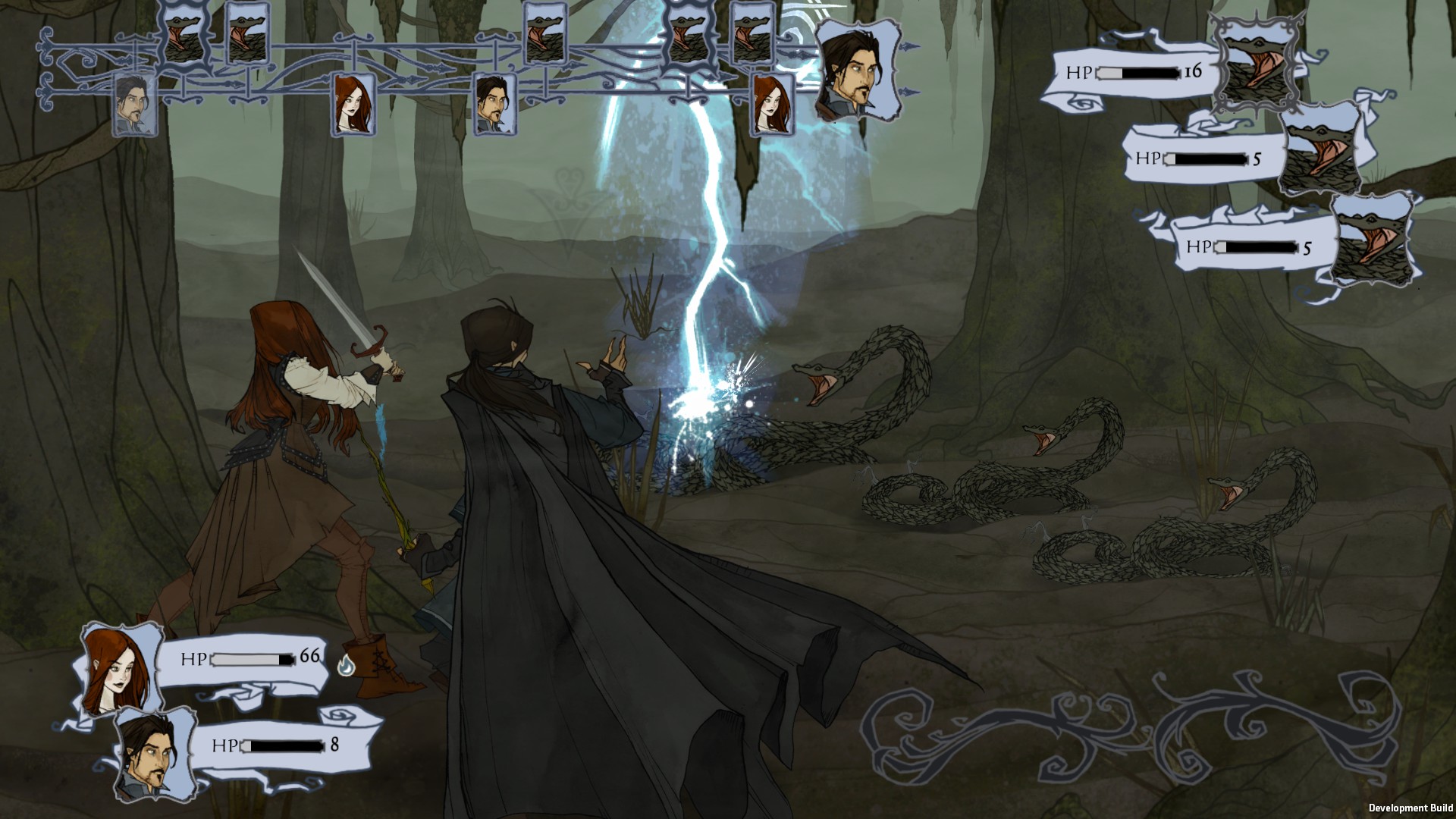 You use the map to move between different areas once they are found during your quest. When you choose to enter an area, if a main or side quest is available, then you will get into a dialogue screen with the main characters and whomever you need to help or maybe just fight. This is all of the traveling that you do in the game – there is never a point where you actually control or move your character on the screen.

The battle system is a turn-based card game, giving you a chance to think about your moves. At the top of the screen, you will see a line with the portraits of your characters and of the enemies. As they move across the line when they hit the main portrait, it’s your turn to make a decision of how said character will act. The game makes the next phase of battle simple as you choose one of the cards in your hand. Each card can have up to two actions on them whether that is attacking (and damage dealt), healing, stunning enemies, boosting power for the next turn, and more. You continue to play cards on your hand until you win the fight. 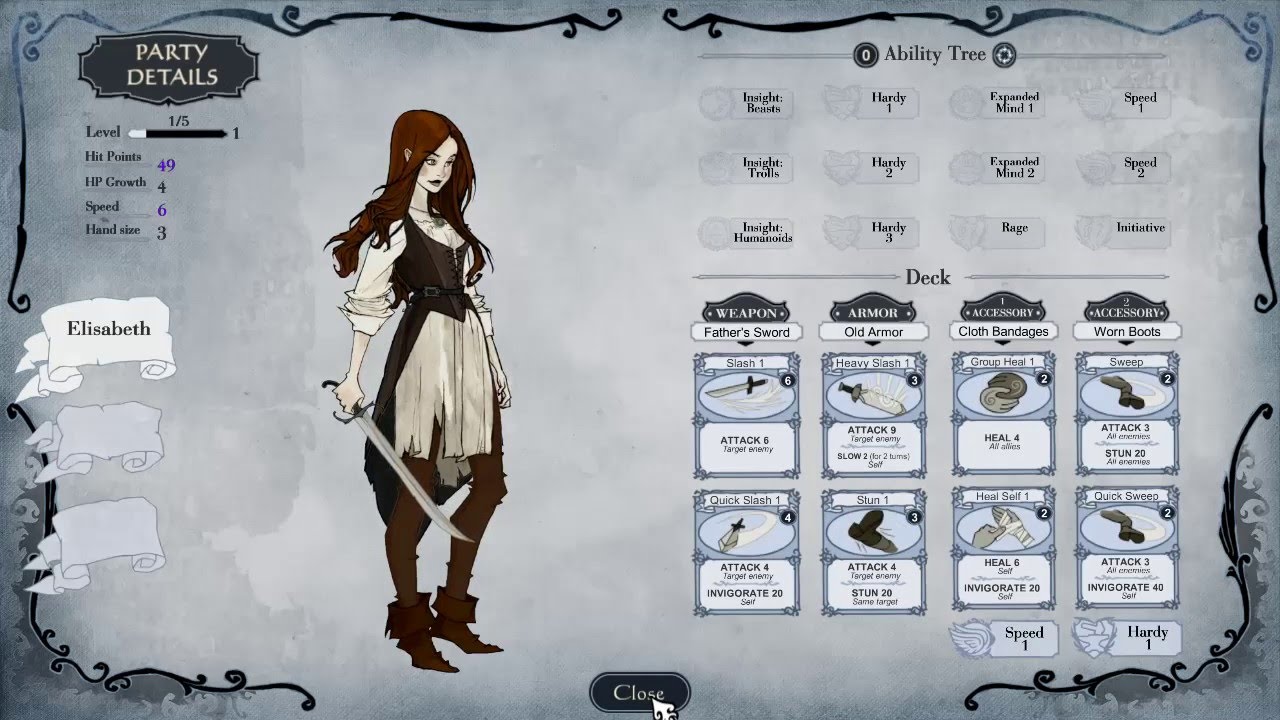 To pick the cards you have in your hand during battle, you need to check your equipment. You can select a weapon, armor, and two accessories and each of the items you select will have up to two cards attached to it. You need to pick the equipment that best fits your play style. Do you want mostly attack cards, some focusing on healing or even cards that buff your characters? It’s a very flexible playstyle that will yield interesting results.

In most battles this was great, but on a few of the bosses, the randomness of what cards you have can leave you short changed due to them coming out randomly. It’s hard to fight a boss when you don’t have any attack cards and just buffs in your hands! This makes the selection of your equipment even more important. If for some reason you are struggling beating a fight, go back and tweak your equipment, and you might see a completely different result the next time.

The game feels great with its hand-drawn art and looks like it’s a fairy tale. I know it’s a different art style, but it gave me flashbacks of Child of Light, one of my favorites RPG of the past few years. Everything fits a consistent theme, and the game takes care to make sure everything sits in that theme properly. The music was alright and kept the game moving, but there wasn’t much to write home about. 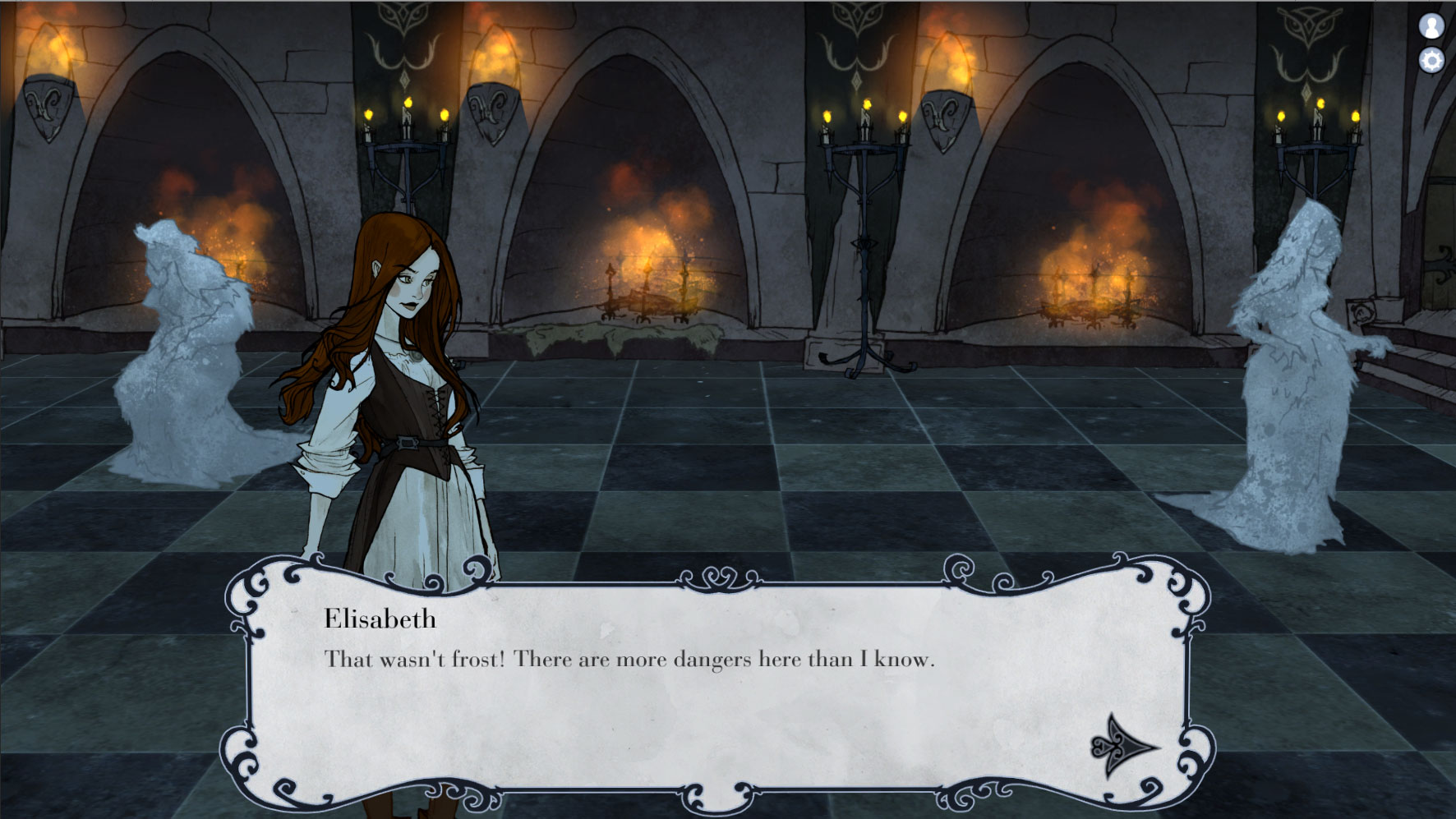 The game has 10 trophies: 1 Gold, 4 Silver, and 5 Bronze. You will unlock every trophy if you complete the game as they are all related to the main storyline. While the mix was good, this list could have been so much more creative. You could have had one for completing all sidequests, for hitting milestones for your your character levels, for unlocking equipment, and maybe even for a speed run. As the game is only about 5-6 hours long, it shouldn’t take you too long to unlock them all.

The Huntsman: Winter’s Curse is a fun RPG and a great way to introduce people to the genre. It’s simple enough for new players to pick up and learn, especially if they enjoyed the movies. Veterans of the genre may find it a bit too easy, but you can change the difficulty if you want. If you are looking to get someone into the RPG genre, you can’t go wrong with this one. I enjoyed playing the game for my The Huntsman: Winter’s Curse review, and I hope you do as well.

Disclaimer
This review is based on a PS4 copy of The Huntsman: Winter’s Curse™ provided by Desert Owl Games, LLC.

DOGOS Coming To PlayStation 4 Next Week