The mechanics are simple and straightforward. The main campaign has eight levels with a boss at the end of every level. Enemies come in all shapes and colors, as does their firepower – the brightly colored glowing bullets flashing across the screen are mesmerizing. 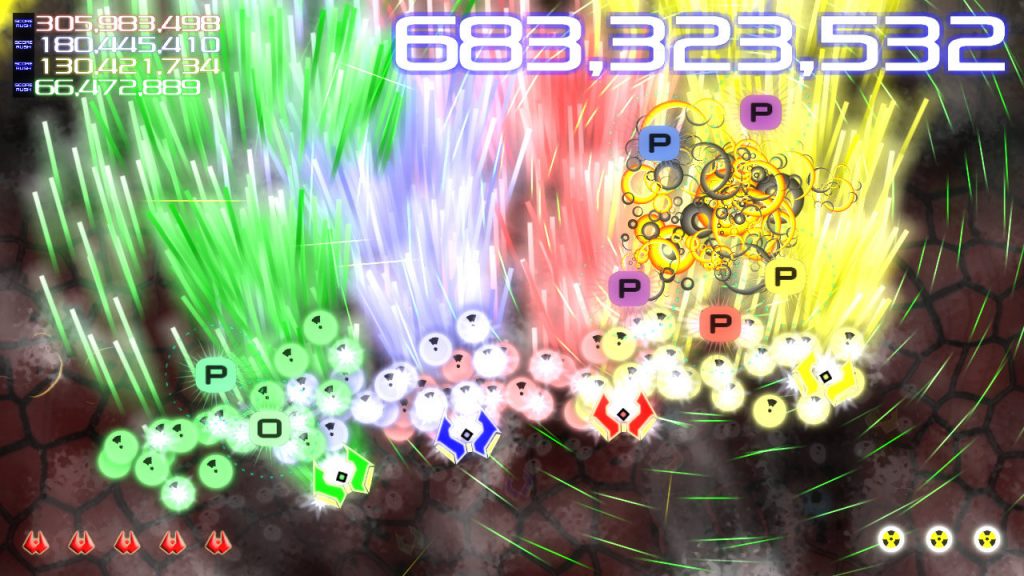 The aim of the game is to survive for as many waves as possible and to survive the boss battle at the end of each level. So instead of combos that you would normally see in a shoot ’em up and opportunities to upgrade or change ships, you have just the one ship and aside from shooting you have access to bombs. The left thumbstick is for shooting, the right thumbstick is for movement The R2 button is for shooting bombs, but do not waste these, as they will be very handy during boss fights as you are only given four bombs in total. 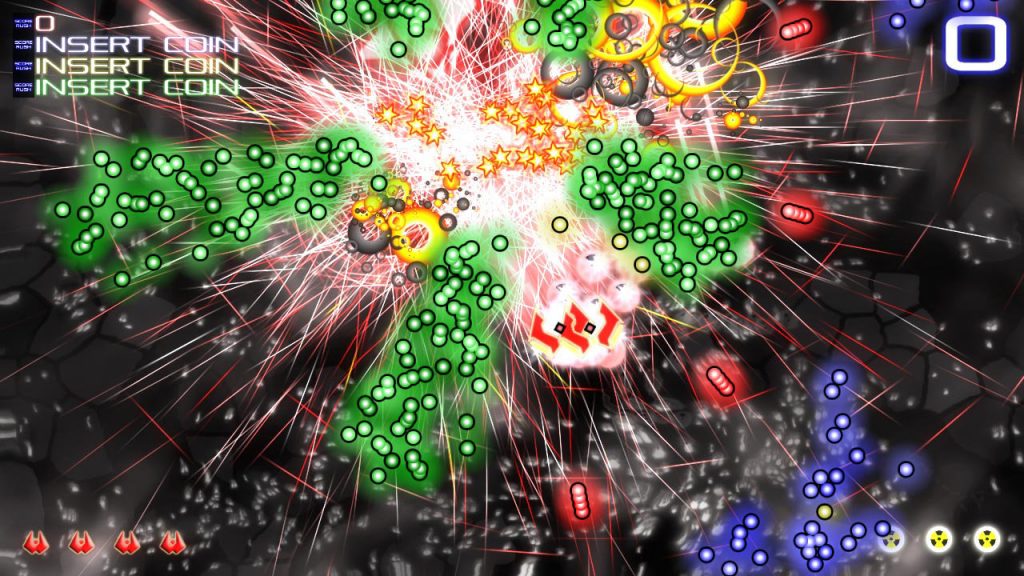 Normal difficulty is the lowest setting, and the first three levels are the easiest of the bunch. Beyond that things get pretty tough, and your screen will be absolutely mad with color from all the explosions and enemy fire. Dodging becomes quite difficult and death comes quickly. Sharp reflexes are a must as is some patience. It took quite some practice but I successfully made it to level four and five after a lot of trial and error as I honed my skills!

For those of you who like a serious challenge and an opportunity to beat the score Xona Games on the leaderboards, you can try and tackle the Expert and Godlike difficulties. Xona Games are obviously big fans of the shoot ’em up genre because their leaderboard scores is just mind blowing! 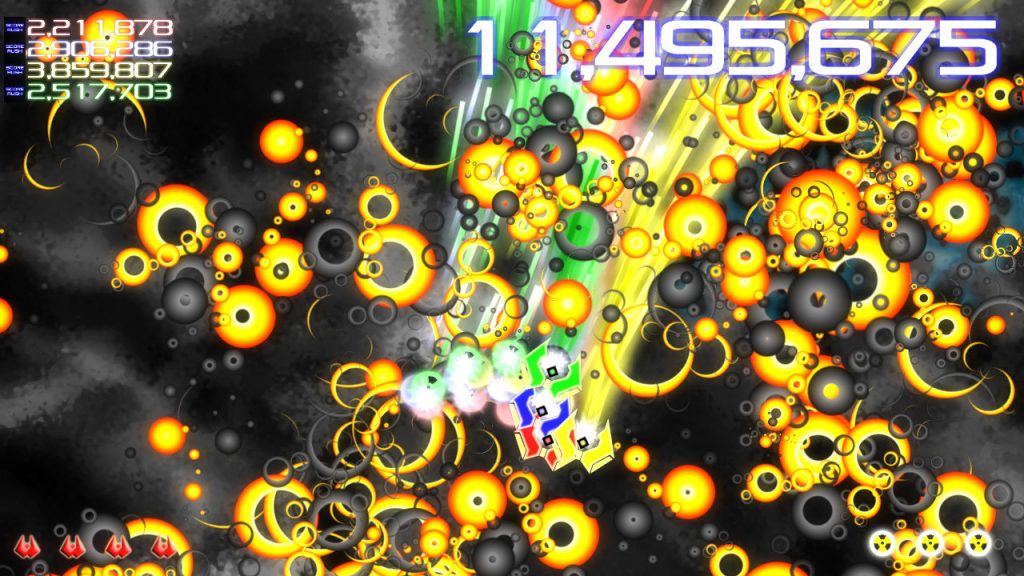 There are plenty of power-ups to collect to increase your fire power and sometimes tiny ships will come along to give you a helping hand which is a nice bonus. If you are short on lives and are in a desperate situation, these power-ups can keep you alive long enough to end the level!

You can also take a crack at Dual mode, where instead of controlling just one ship, you take on controlling two ships at once. You still have a decent amount of firepower, but since you only have a limited number of lives between both ships you must be extremely careful! This is a VERY hard mode where things are crazier than ever, but you’ll surely have some fun! 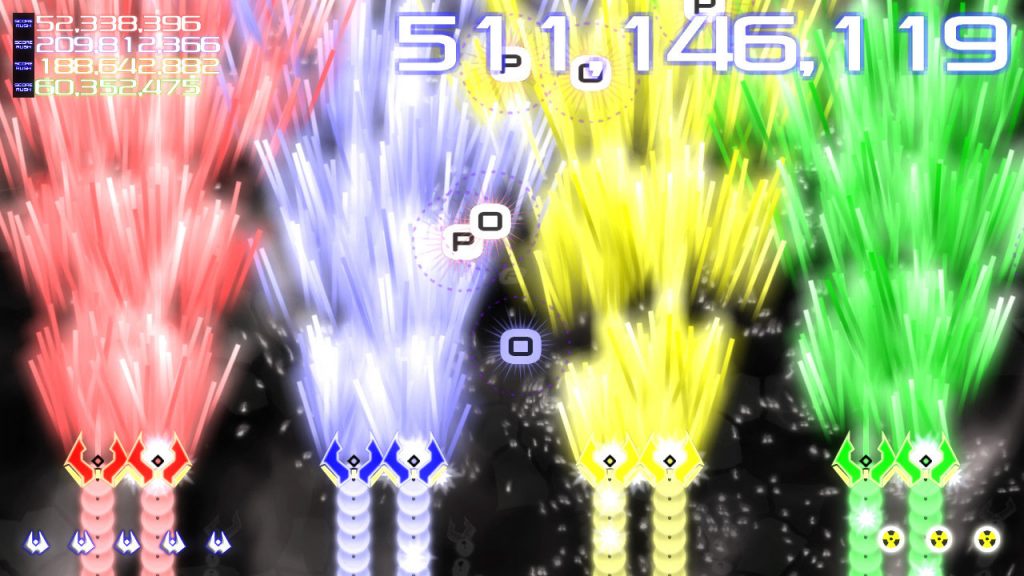 The last and final mode is Boss Rush Mode, which is available right from the start. The mode is pretty self-explanatory – they are not just bosses from Score Rush mode, but MUCH MUCH tougher than the bosses you encounter in Score Rush. Their firepower has been increased and their health bar is much larger, but power-ups are in good supply. Boss Rush is a good beefy challenge for those who love tough games. You can play the game with three other players if you have three spare controllers, and this is definitely a fun couch co-op option.

Because of the game’s simple mechanics and despite its difficulty I do recommend it for fans of the shoot ’em genre since a challenge is alwasy welcomed. I had a lot of fun playing this one for my Score Rush Extended review, and I’ll continue to practice so that I can try to get all trophies in the game! 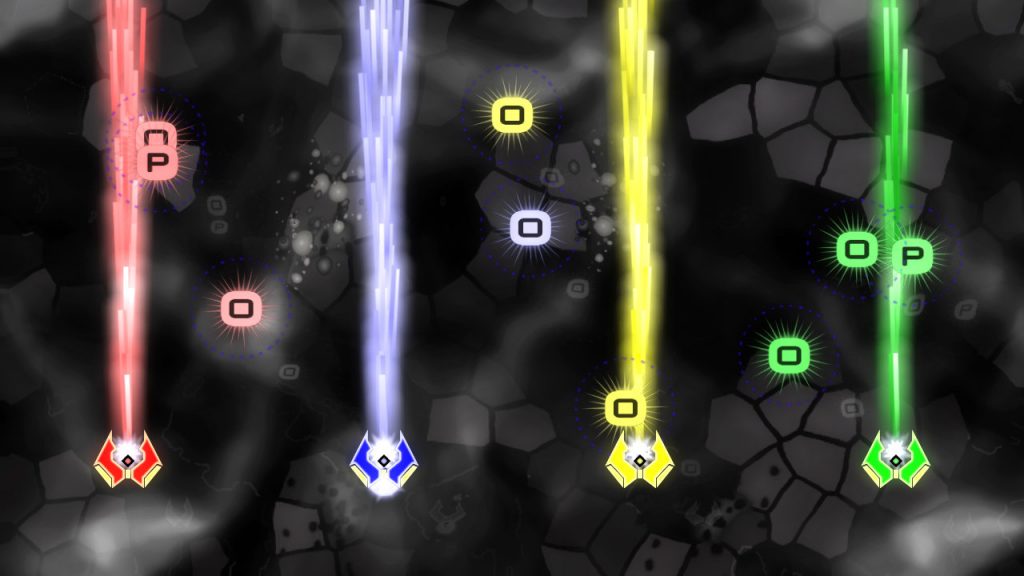 Jazzpunk: Director’s Cut Out On PS4 On September 20