Access Denied is the seventh episode in Minecraft: Story Mode, and the second episode in the Adventure Pass expansion set for the game. How does this new episode compare to the previous one in the series? Let’s find it out in our Access Denied review!

In Episode 7: ‘Access Denied’, continuing their portal journey in search of home, Jesse and crew land in a world entirely controlled by PAMA – a sinister “thinking machine” determined to command everyone and everything in pursuit of optimal usefulness and efficiency. Forced on the run to avoid capture and assimilation, you’ll need to work with a new ally to defeat the corrupted computer and free the population it has enslaved.


This episode begins as the crew is tired of searching for their home in the world of many portals. An argument occurs, and then they’re off again to search for their home. You can imagine how after a very harsh argument things won’t be the same, but that’s all I can say without spoiling things!

As they go through another portal leading to a whole new world, they find a world full of mysterious Redstone devices which render their wearers unable to think for themselves. Those devices are attached to any living object: people, zombies, skeletons, and so on. The intrigue of this episode revolves around that mystery, and about what you can do about it!

After playing this episode, I realized that since episode 5, we’re getting full blown stories in the world of Minecraft in each episode, and I don’t want this series to end! This episode ends in a cliffhanger, and I really can’t wait for episode 8, which will also be the end of this adventure. Or maybe Telltale Games has another pack of episodes for us after this one or a second season? Who knows!

Fun fact: the game over screen has been slightly adjusted for this episode, and I’m sure you’ll love it! 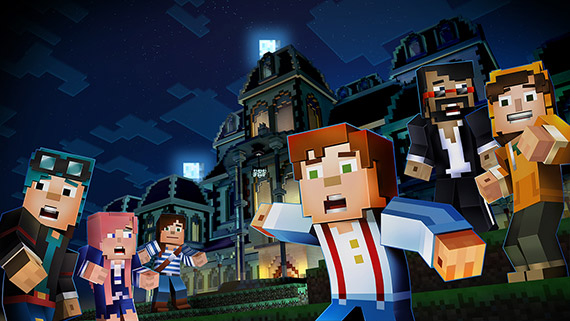 Episode 7: Acess Denied was great, but I still think that episodes 5 and 6 have ben better than this one. Should be fun to see what the final episode in Minecraft: Story Mode will give us!

In case you didn’t know, the main story (first five episodes) featured a Platinum Trophy, and the three new episodes in the Adventure Pass trophies are all awarded for regular progression, with none of them being missable, which is always great news! Unfortunately this does mean we’re not getting a second platinum for the series which would have been possible if Episodes 6-8 (and maybe even an episode 9!) had been released as a separate season.


This review is based on a digital copy of Minecraft: Story Mode provided by Telltale Games.
Telltale Games
0 comment
0
FacebookTwitterEmail

DOGOS Coming To PlayStation 4 Next Week

Jazzpunk: Director’s Cut Out On PS4 On September 20