Coffin Dodgers is a funny kart racer, except you don’t race karts, but mobility scooters! The game is incredibly fun and worth a look. It is one of the best racers I have played in years, and I enjoyed getting a new Platinum trophy for my collection! Come read our Coffin Dodgers Review to see why you should add this game to your PS4 collection!


You play as one of seven retirees leading a peaceful life, but all is not what it seems. The residents of Sunny Pines look to a relaxing life after years of working, doing the things they never had the time to do when they were working. A new creepy resident arrives, and he wants their souls. However, the seven residents have another idea and set a plan in motion to oust the Grim Reaper from Sunny Pines forever! How? By challenging him to a race to the death! If the retirees win they can enjoy their retirement in peace, and the Grim Reaper will leave, but if Grim wins, he gets to harvest all their souls and live at Sunny Pines forever! 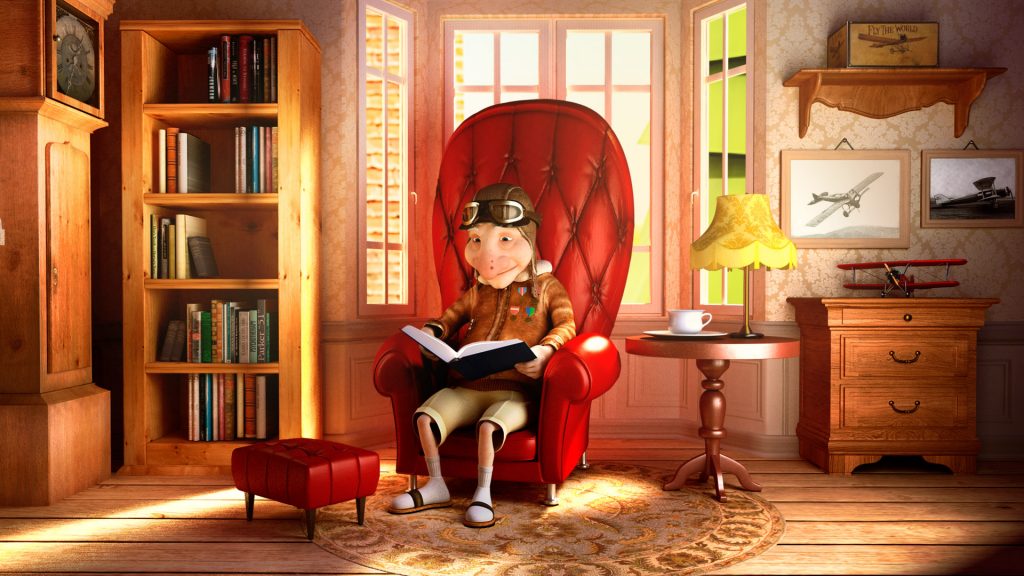 The Grim Reaper has three days to win the championship races against the old timers, and since he doesn’t think he can lose, he doesn’t do anything for a while. Meanwhile, the residents of Sunny Pines get busy modifying their scooters to make them fit for the big race! The game has thirteen playable tracks that are played in the order they are unlocked. 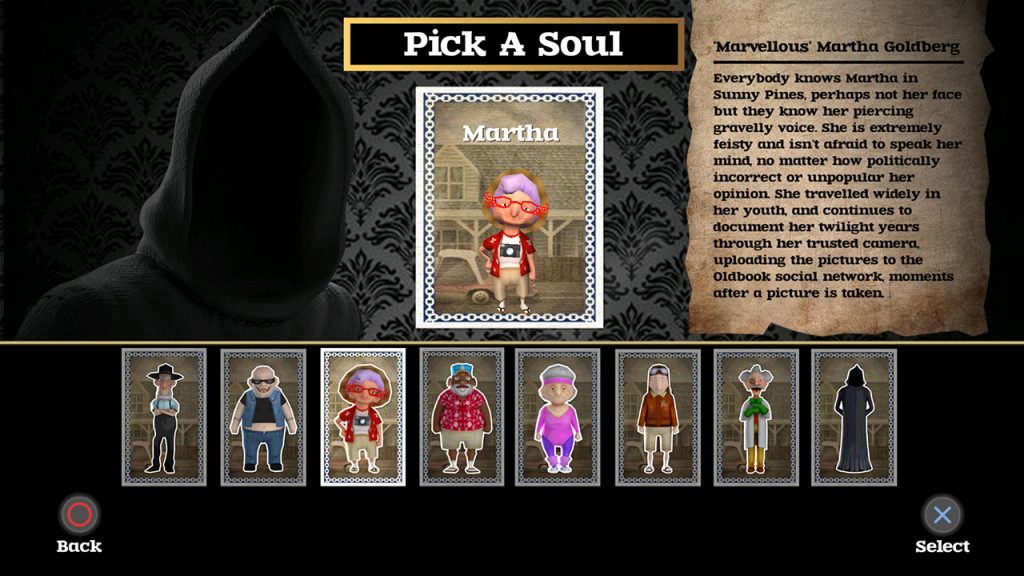 Here’s a look at the characters you’ll get to play as:

Wilbur ‘Softball’ Williams is famous for his blues music. During a show one of the strings on his guitar snapped and left him unable to complete his set, so he decided to hide his shame by retiring to Sunny Pines.

Rudolf ‘The Red Horn’ Hoffman is a retired German Messerschmitt pilot. Rudolf crashed his plane somewhere in Spain during WW2 and found himself washed up in America with a British accent – Rudolf is very a very eccentric character.

‘Iron Horse’ Hank Hudson Hank was a bit of a biker in his day. He was the leader of a biker gang, and did a lot of organized crime, these days he swaps his bike for a mobility scooter and relaxes at Sunny Pines. His experience could come in handy in a race!

Jeremiah ‘The Hawk’ Brenneman is a retired Amish farmer with a deep secret love of technology (don’t tell his family!). He’s being enjoying the opportunity to mod his mobility scooter despite his religious beliefs! Go Jeremiah!

Professor Percival Chase III. Even in retirement he still experiments in anti-aging drugs and carries out the experiments on himself. I can’t even begin to imagine the damage he does to himself!! Is he a good choice for a racer?

Lucy ‘Legs’ Hernandez Lucy is a former model who had the best legs in the business. But the question is, does she have the legs to beat Grim Reaper in a deadly race?

‘Marvelous’ Martha Goldberg Martha is a well liked a popular resident of sunny pines, she is feisty and says what she thinks, could she put the Grim Reaper in his place? 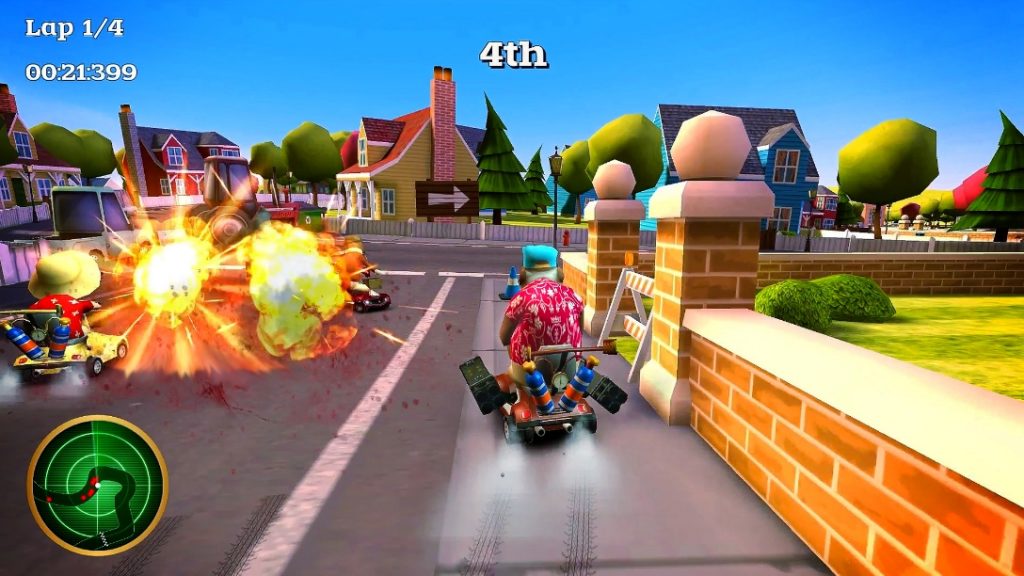 There are thirteen races available, and you have to finish in a certain place to be guaranteed a spot in the next race. Each race is full of power-ups that can help you along the way such as speed ramps, weapons like uzi, missiles oil spillage and even the use of a walking stick – the weapon choices are quite wacky which perfectly matches the theme of the game. 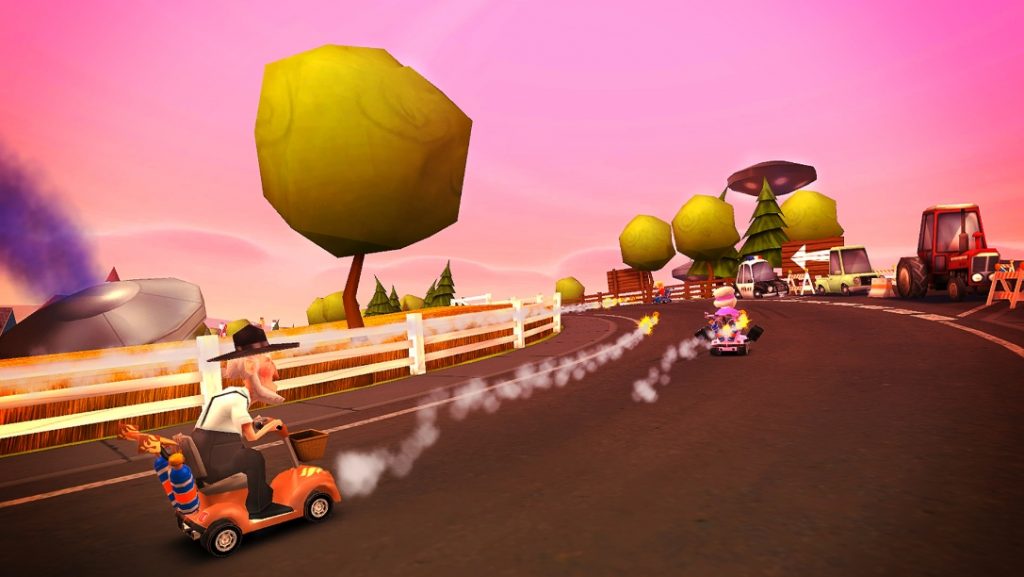 The tracks all have three laps and vary in size and difficulty. Some have more sharp turns than others, and there are plenty of obstacles that can prevent you from winning. Obstacles feature the walking dead, cars on the road, manholes, bottomless pits, trains and more. Beating the game unlocks the Grim Reaper himself as a playable character which you need to play as for the Platinum trophy. Two full playthroughs will give you two different endings – which are very funny. You should unlock most trophies as you play since you’re doing two full runs anyway.


You can upgrade your scooter by adding an extra weapon, increase its speed and fire rate. I’ll admit the upgrades section isn’t very deep, but this is not a regular kart racer, and scooters are not really made for true racing. Coffin Dodgers is a fun game with a simple but small upgrade system which works well for the kind of game it is. 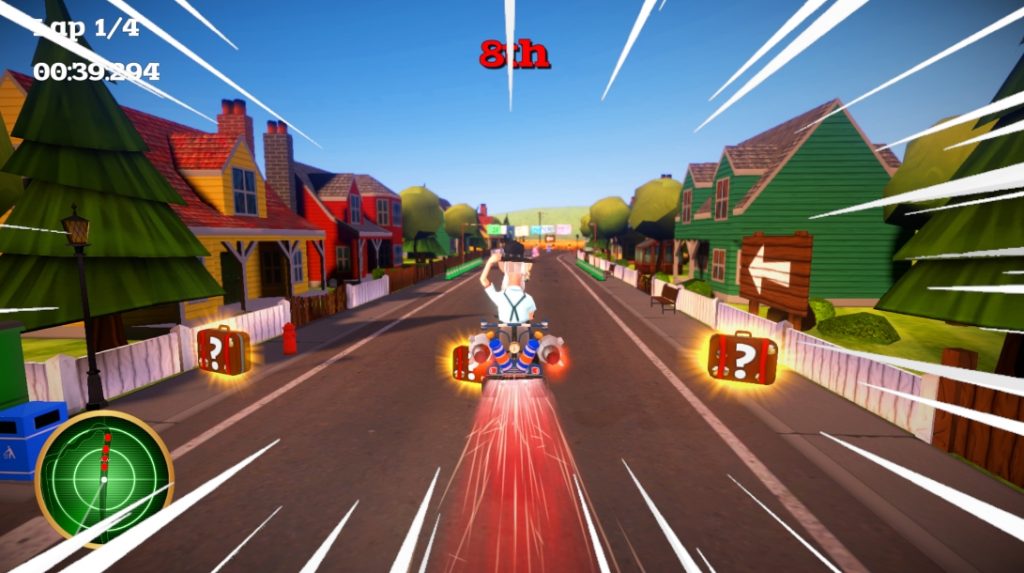 There is also an exploration mode where you can take on races you have played or just zoom around on your scooter for fun. There is also Crazy Granddad mode in which you have to find stuff like slippers, war medals, false teeth or anything that is related to the elderly – it is pretty fun! 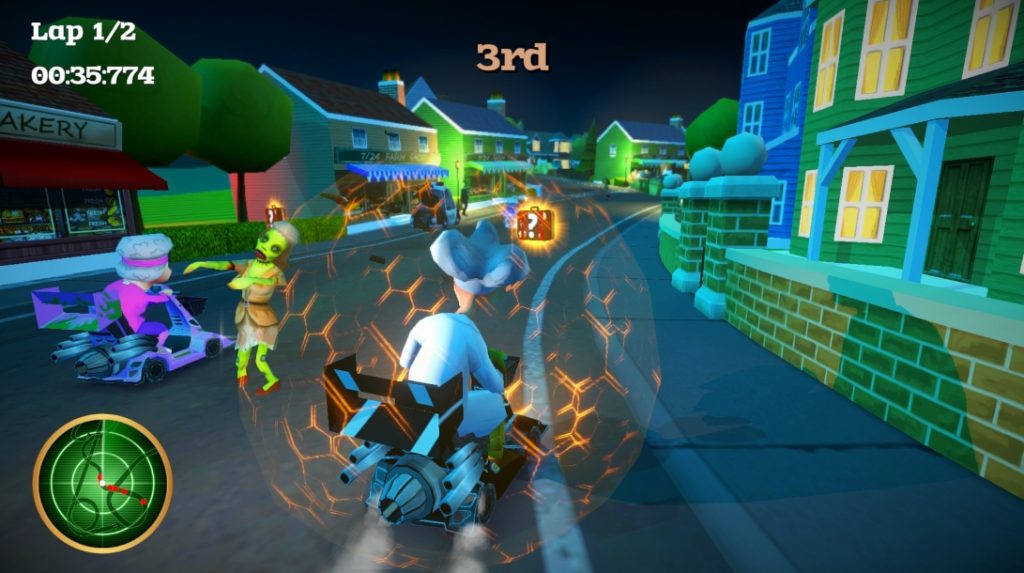 I spoke to developer Milkytea shortly after gaining my Platinum trophy as the ending left some questions open, and the team has confirmed that Coffin Dodgers 2 is currently in development, and it is going to be a much much bigger game! I’m definitely looking forward to reviewing the sequel since I had a blast with this one! 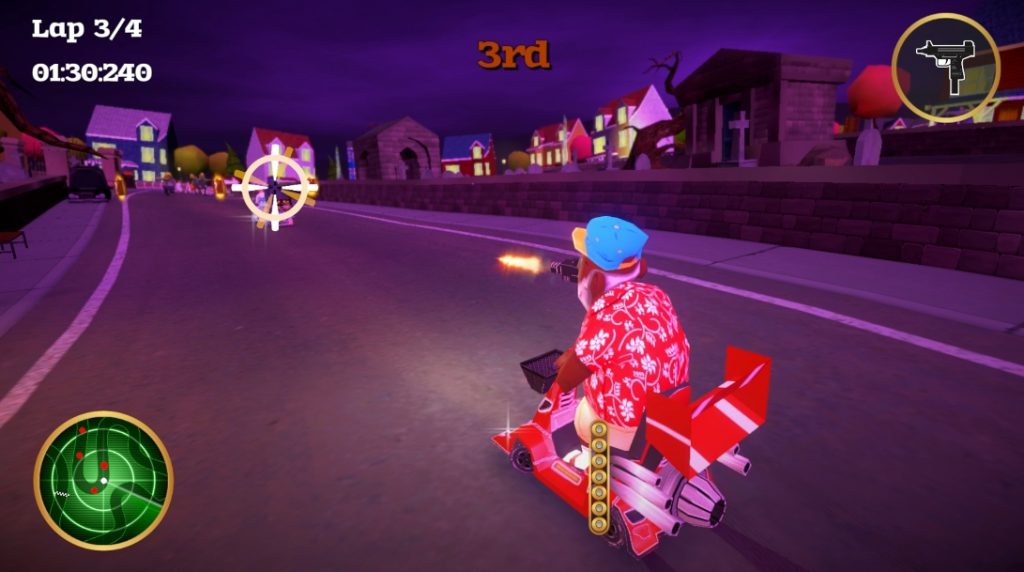 Coffin Dodgers is an incredible game that left me wanting more. I had a lot of fun writing my Coffin Dodgers review and I can completely recommend that you get this quirky racing game. I loved the idea of racing with mobility scooters rather than karts, and it was an interesting change from all the other kart racers out there! If you’re looking for a fun game with a full trophy count you can get in around 6-8 hours if you’re good at racing games, then look no further because this is the one for you!

Disclaimer
This review is based on a PS4 copy of Coffin Dodgers provided by Wales Interactive.