The Escapists is a lighthearted sandbox prison simulator with a retro style graphics and a big emphasis on crafting and your ultimate goal in the game is to escape from prison. If this sounds like something you’d dig, then come check our The Escapists review to find out more!


The Escapists is an award winning prison break simulation that provides players the opportunity of experiencing a light-hearted insight into everyday prison life. Whilst the aim of the game is simply to escape, the detail is in the execution. (Don’t say the word execution too loud in a prison). You may not be in an open prison, but you are in an open world where in between attending rollcalls, mealtimes and doing your chores you should grab every chance to plan your escape. Do you do favours for other inmates earning money and boosting their opinion of you along the way? Or workout and become stronger? Read to increase your skills or spend your time crafting items into homemade weapons and tools. What about working diligently in your prison job, to gain promotions to new jobs with better benefits? Keep a low profile or go out all guns blazing, as long as you escape in the end, that’s all that matters

The game has six prisons to escape from, and your first one is Center Perks (a minimum security prison) that only has five guards and ten inmates, which, as you can guess, makes this the easiest of the lot. When you have escaped, the following prison will unlock and then the other ones as you complete them. These are Stalag Flucht, Shankton State Pen, Jungle Compound, San Pancho, HMP Irongate, and there is also a bonus DLC one called Alcatraz which can be purchased on the PlayStation Store. 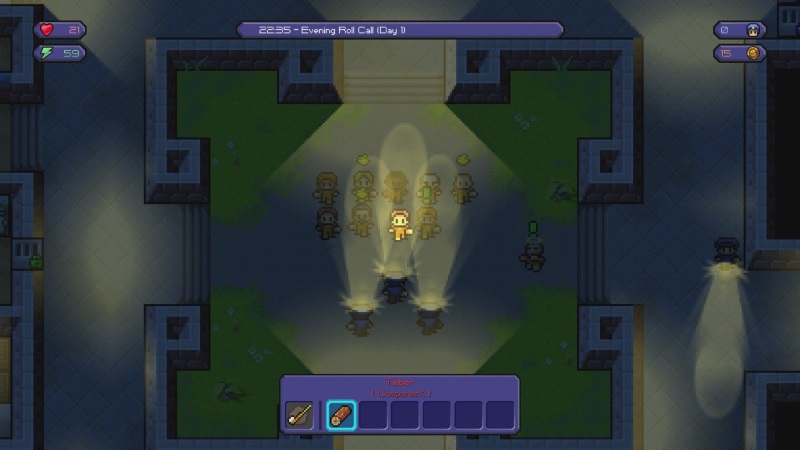 Upon starting The Escapists, you can customize your character by choosing his looks and his name, and when you are done, you can begin the tutorial. The tutorial gives you a short overview if how to craft items, pick up things and buy stuff, but that is all. The developers designed the game to have no hand holding. It is a prison simulator after all!

The most important aspect of this game is the crafting system. You can craft lots of stuff such as outfits, weapons, and tools. Examples of weapons you can craft are: Comb + Razor = Comb Blade, Sock + Soap = Sock Mace, or Timber + Wire + Timber = Nunchakus. Go ahead and experiment to see what you can come up with. Bear in mind, that crafting each item requires a certain level of intelligence, so get your intelligence stat up to 80 or above as quickly as possible! All you need to do to accomplish this is play on the computer as much as possible and when you get fatigued just take a nap in your cell until your fatigue bar is replenished and go at it again. A solid 15-20 minutes should do the trick.

When you find or steal stuff for Crafting, if an item is showing as red it is considered contraband, but if the item shows as green, then you are safe. For example, Paperclips are considered safe, while Duct Tape is considered contraband. If you get caught doing something you shouldn’t be doing then you will get solitary confinement, and you’ll also lose all the items you were carrying. So be careful, and don’t carry stuff for too long – store things in your desk as soon as possible.

Aside from trying to escape prison, you will lead a normal prison life, following the rules. You will sleep, eat, work, attend roll calls and exercise, and during your free time you can do favors for other inmates, as you work on your escape plan in secret!

-Distraction: These require you to target an inmate or a guard during an event like roll calls, causing guards to chase after the target.

-Beat-down: These involve beating up an inmate or a guard. Beating up a guard earns you a bigger payout.

– Item return: These require you to retrieve items stolen by other inmates.

It is a good idea to do as many of these favors as humanly possible as you will need to buy a lot of crafting stuff to aid your escape. Some inmates will also sell you things if they like you enough – gifting them things you own increases their opinion of you. If an inmate’s name is in red then they don’t like you at all and will never sell you anything unless you can somehow change their opinion of you. 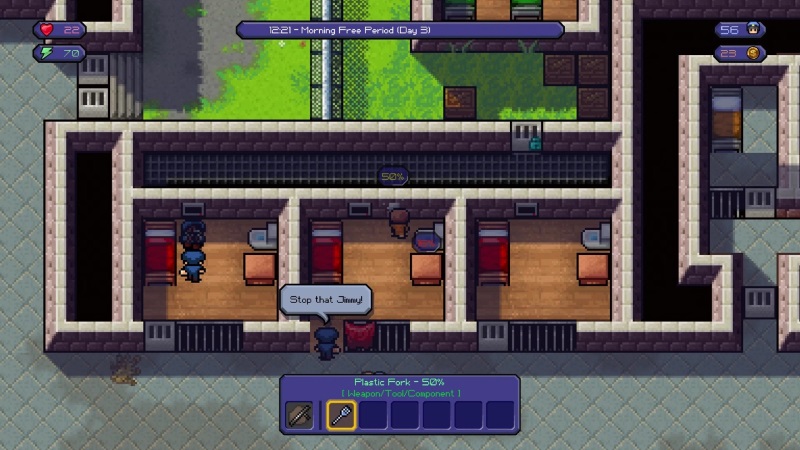 The Escapists has no difficulty setting, so the game ramps up the difficulty automatically as you work your way through each prison. With each new prison, the number of guards increases and their weapons become deadlier, so you will need to be clever and keep your intelligence, speed and strength stats up to beat the harder prisons.

To earn the Platinum Trophy, you will need to put in at least 30 hours of your time. Sure, a speed run may take half that time depending how good you are at crafting, but you’ll probably need a guide to do things so fast.

Final Thoughts
I really enjoyed playing The Escapists. I must admit that at first though I felt a bit lost and unsure of what to do when the tutorial abruptly ended, but I soon had the game figured out and started to really enjoy it.- I would definitely recommend picking it up since I had an absolute blast writing this The Escapists review!

World Of Final Fantasy Getting A Collector’s Edition!